Although there were reasons to be optimistic, Fisch undoubtedly expressed frustration about the offense he oversees.

That unit’s performance vs. the Ducks was typical in some ways, atypical in others. The Wildcats failed to cash in on multiple scoring opportunities. But they put themselves in position to score more often than usual.

“I think we can all point to the games that we have played this season where we’ve had opportunities to score and haven’t,” Fisch said a couple of days later. “And that, again, showed up on Saturday evening.”

The traditional way to measure that is through red-zone scoring rates. Arizona, which is on a bye before returning to play UCLA next week, ranked among the nation’s worst offenses in the red zone entering this week. The Wildcats were tied for 121st in overall red-zone scoring rate (64.3%) and ranked 128th in red-zone touchdown rate (28.6%).

Given that we already have examined Arizona’s red-zone woes this season, we decided to look at the Wildcats’ persistent, flabbergasting offensive inefficiency in a slightly different way in this special weekend edition of “Cats Stats.”

One of the ways in which the offense’s performance vs. Oregon stood out was that Arizona pieced together six drives of 10 or more plays. That’s the highest total during the team’s 16-game losing streak.

The Wildcats turned only two of those six possessions into touchdowns. That felt all too familiar.

So we decided to look at every game Arizona has played since the start of the 2019 season to find out how many times the Wildcats have had drives of 10-plus plays — and how many times they scored on those possessions.

The numbers are eye-popping. Over the course of the streak, Arizona has had 35 drives of 10 or more plays. The Wildcats have scored touchdowns on only eight of those possessions.

We’re not aware of this particular stat — touchdown rate on drives of 10 or more plays — being kept anywhere, so it’s somewhat difficult to put it in context. But we do have something to compare it to — Arizona’s first five games of ’19.

In those five games, Arizona had nine drives of 10-plus plays. The Wildcats scored touchdowns on seven of them. The other two resulted in a field goal and a punt.

Put another way: Arizona had one fewer touchdown on nine drives of 10-plus plays in the first five games of 2019 than it’s had in 35 such drives over the past 16 games.

The Wildcats’ inability to finish drives isn’t the only reason they’ve lost so many in a row, but it’s unquestionably a significant factor.

The fact that the Wildcats had six drives of 10-plus plays against Oregon is an encouraging sign. They converted 7 of 15 third downs — easily their best performance of the season in that area.

Arizona entered the Oregon game dead last in the nation in third-down conversion rate — an inconceivable 20%. The Wildcats converted nearly as many third downs against the Ducks as they had in the first three games combined (nine).

Fisch also went for it on fourth down four times — and Arizona converted all four. It was no wonder then that the Wildcats established season highs in total plays (88), first downs (31) and time of possession (37:58).

Those numbers also lend credence to Fisch’s decision to anoint Jordan McCloud as the starting quarterback for the foreseeable future. The offense simply has moved better with McCloud at the helm. It started on the last drive against NAU — a seven-play, 85-yard march that ended in a touchdown.

To measure McCloud’s effectiveness, let’s look at a drives in another way. With McCloud at quarterback, Arizona has had four drives covering 70 or more yards. QB competitors Gunner Cruz and Will Plummer — who each have had at least one start and have appeared in multiple games — have one apiece.

But there’s no denying McCloud’s role in keeping the chains moving. Arizona converted 11 third and fourth downs. McCloud had a hand in nine of those — four rushes and five passes. They included a pass to Boobie Curry to convert a third-and-13, something the Wildcats pull off with Halley’s Comet-like infrequency.

McCloud also threw five interceptions against the Ducks. Two of those came in the red zone. Both spoiled drives of 10 or more plays.

Eliminating those mistakes has been and will continue to be a focal point as Arizona rests up and prepares for its Oct. 9 Pac-12 home opener against No. 20 UCLA. The Bruins were second in the Pac-12 in overall scoring and tied for 31st in the nation in red-zone touchdown rate entering their game against Arizona State, so matching their efficiency will be essential.

Arizona has had difficulty finishing drives during its 16-game losing streak - especially those covering 10 or more plays.

Missed tackles by Cecil’s group have led to big plays by opponents; plus: how the game has changed since his playing days.

The Cats and Bruins will square off at 7:30 p.m. at Arizona Stadium; the game will air on ESPN.

The good, the bad and the ugly of the Arizona Wildcats' first four games of Jedd Fisch era 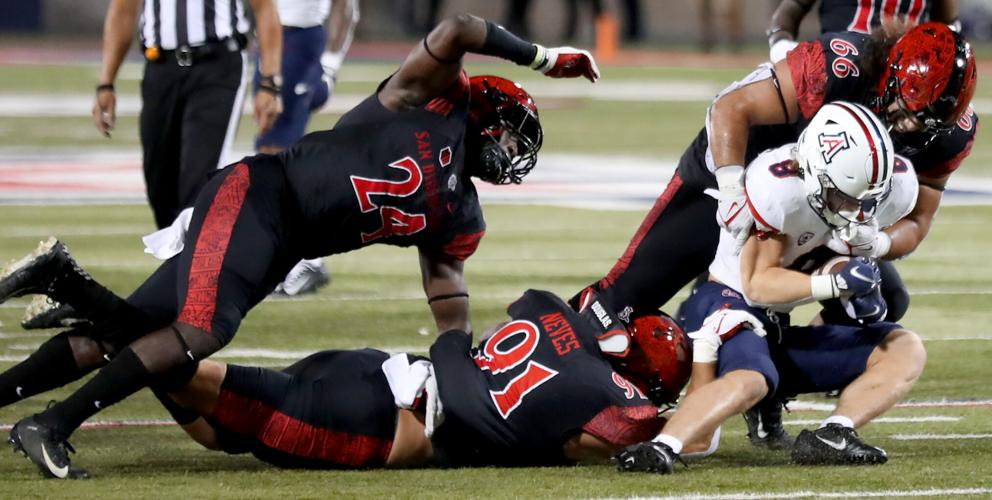 Arizona running back Drake Anderson gets swarmed behind the line of scrimmage by San Diego State defenders during the Wildcats’ Week 2 loss. The Wildcats entered their bye ranked 121st nationally in red-zone scoring and 128th in red-zone touchdown rate. 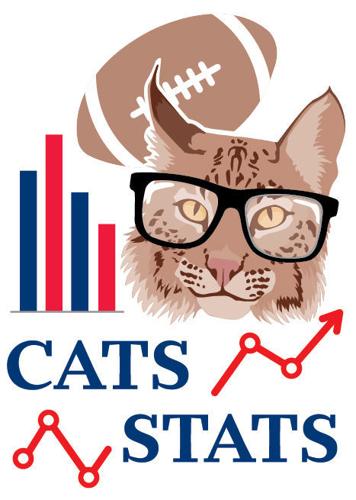 Each week throughout the football season, we’ll take an in-depth look at the Arizona Wildcats from a statistical perspective.