Kevin Sumlin wasn’t sure if Arizona’s special-teams performance against Oregon was its best of the season. That’s probably a good sign.

Just as the team as a whole put together its most complete game, so did the special teams. But it wasn’t the first quality outing by a unit that is much improved — and is playing a critical, underrated role in a season that could end with a bowl berth. The outcome of Friday night’s game against Colorado will go a long way toward determining whether that happens.

There are any number of ways to measure the impact of special teams. But the one that matters most is field position. Continuing a trend that began last season, the Wildcats are playing to a net positive in average starting field position. That statistic directly correlates to winning percentage.

Before we get to that, let’s take a brief look at the numbers.

The website CFBAnalytics.com tracks average starting field position. According to the site, Arizona started drives 4.76 yards farther downfield than its opponents last season. This year, that figure is plus 2.43. Both stand in stark contrast to 2016, when the Wildcats were minus 4.10.

Bill Connelly of SB Nation’s Football Study Hall documented the impact of field position, which he lists among his “Five Factors” most likely to determine the outcomes of football games.

Using 2013 game data, Connelly determined that if you win the field-position battle — based on average starting field position — you win 72 percent of the time.

Arizona’s results over the past two-plus seasons support Connelly’s supposition. Since the start of the 2016 season, the Wildcats are 12-3 when they have a better average starting field position than their opponents. They are 2-16 when they don’t. (One game — Oregon State last year — ended with the teams having the same average starting field position.)

In 2017, Arizona bucked the trend four times. The Wildcats won twice with a worse average starting field position and lost twice with a better average start. But in each of those instances, the difference was just 1 yard.

One of the losses came against Utah, when Arizona turned the ball over five times and lost by six points. The other came in the Foster Farms Bowl. Arizona lost 38-35 on a touchdown scored in the final two minutes.

This season, Arizona is 4-1 when it wins the field-position battle — and 0-4 when it doesn’t. The anomaly was the UCLA game, which the Wildcats lost by one point.

The special-teams unit isn’t the only one that affects field position, but no unit has a greater influence. Here are some of the areas where Arizona has improved the most:

Klumph is averaging 41.5 yards per punt. The Wildcats’ net average is 39.3 – an increase of nearly 10 yards. That matters.

Klumph arguably had his best game against Ducks. He punted three times in the first quarter. One was downed at the Oregon 8-yard line. One was fair-caught at the 16. The other rolled out of bounds at the 8.

Kickoffs: Lucas Havrisik has had a profound impact here, and he has taken his game to another level this season.

Havrisik has booted 45 of 53 kickoffs for touchbacks. His touchback rate of 84.9 percent ranks seventh in the nation, per The Football Database. It’s significantly higher than last year’s rate of 67.7 percent, which ranked 11th.

In 2016, prior to Havrisik’s arrival, Arizona had a touchback rate of 34.5 percent. Since he got here, opponents on the receiving end of kickoffs are starting drives at the 25-yard line way more often than not.

Return differential: This is the difference between the Wildcats’ kickoff- and punt-return averages and those of their opponents.

It’s pretty easy to see which way this is trending:

Also, because of Havrisik’s ability to consistently send kickoffs into the end zone, opponents barely have had any return opportunities. They have returned six of 54 kickoffs (including one onside attempt by Josh Pollack, who, by the way, has made seven straight field goals). Arizona has returned 26 of 47.

The Wildcats created multiple “sudden change” situations last week. Two came courtesy of special teams, including Chacho Ulloa’s blocked punt in the second quarter, which set up the UA offense at the Oregon 6-yard line. It was Arizona’s second blocked punt of the season but the first that didn’t travel beyond the line of scrimmage.

The Ducks turned the ball over three times. Takeaways cannot be excluded from the field-position equation.

Turnovers — and the field position they created — were critical factors in victories over Cal and Oregon.

Christian Young’s fumble recovery against the Ducks gave the Wildcats the ball at the Oregon 21. Scottie Young Jr.’s interception set up Arizona at its 49.

The Wildcats had a 22-yard advantage in average starting field position in the first half. They led 23-8 at halftime and won 44-15.

Field position has a profound impact on the outcomes of football games. Here are Arizona’s records since the start of the 2016 season when it wins and loses that battle, based on average starting field position:

(*-Arizona and Oregon State had the same average starting field position in their Nov. 19 game in Corvallis.)

The junior’s leveling of Oregon’s Dillon Mitchell was reminiscent of another tackle by a recent Arizona defensive back.

The Wildcast, Episode 145: Will Arizona's thumping of the Ducks carry over against Colorado?

Justin Spears and Michael Lev recap Arizona's statement victory over then-No. 19 Oregon, which was a well-rounded performance by the Wildcats.…

Despite huge victory, Kevin Sumlin focuses on areas where Arizona Wildcats can improve

Although the UA scored 44 points against Oregon, the offense wasn’t nearly as productive as it could have been.

The Star's exclusive, in-depth breakdown of the Cats' season-changing performance against the Ducks.

Each week throughout the football season, we're taking an in-depth look at the Arizona Wildcats from a statistical perspective. Here’s the lat…

Arizona's latest commitment came Thursday with the succinctness and simplicity that would make him the envy of any newspaper reporter.

Star reporter Michael Lev checks in with five storylines for the Arizona Wildcats' Friday night bout with Colorado, from one player's 'cramp c…

Taylor leads the nation in all-purpose yards; he also might be the best teammate on the UA roster.

The Star's Greg Hansen checks in with Kevin Sumlin's lineage, smothering punts — and a prediction.

Three things to keep an eye on when the Wildcats face the Buffs tonight at Arizona Stadium.

Field Pass: Matchups, starters and stats to know for Arizona vs. Colorado

Star reporter Michael Lev breaks down key matchups, strategy and starters for both Arizona and Colorado for a Friday night battle in Tucson, a…

Notes and takeaways from warmups before the Wildcats host the Buffaloes at Arizona Stadium.

Follow The Wildcaster's live coverage from Arizona Stadium as the Wildcats welcome the Colorado Buffaloes to Tucson for a Friday night showdown.

The quarterback throws for a career-high 350 yards and five touchdowns as the Wildcats beat the Buffaloes 42-34.

Khalil Tate reinvents himself with a different kind of dominance as Cats top Colorado at Arizona Stadium.

The Wildcats shut down prolific rushing attacks in back-to-back weeks entering their bye. 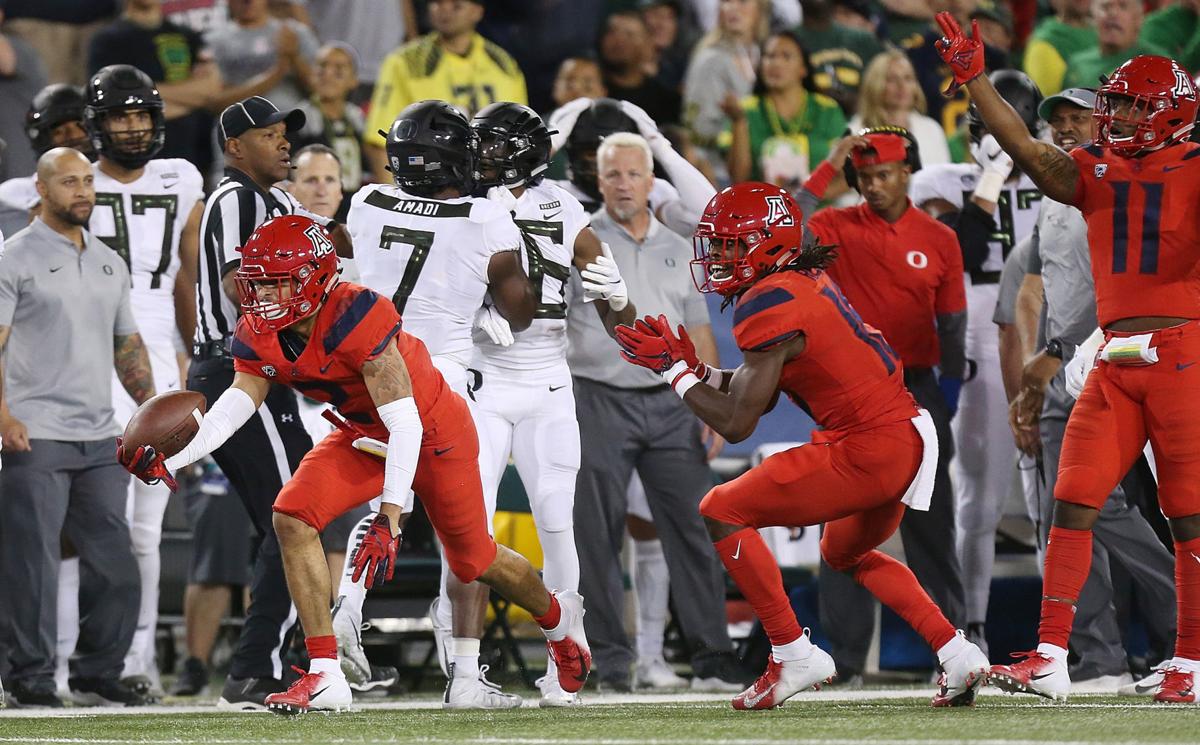 Arizona Wildcats cornerback Lorenzo Burns (2) comes up with the ball after Oregon muffed a kick return during the third quarter of the teams’ game Saturday at Arizona Stadium. Arizona is 4-1 this season when it wins the field-position battle, as it did in a win over Oregon. 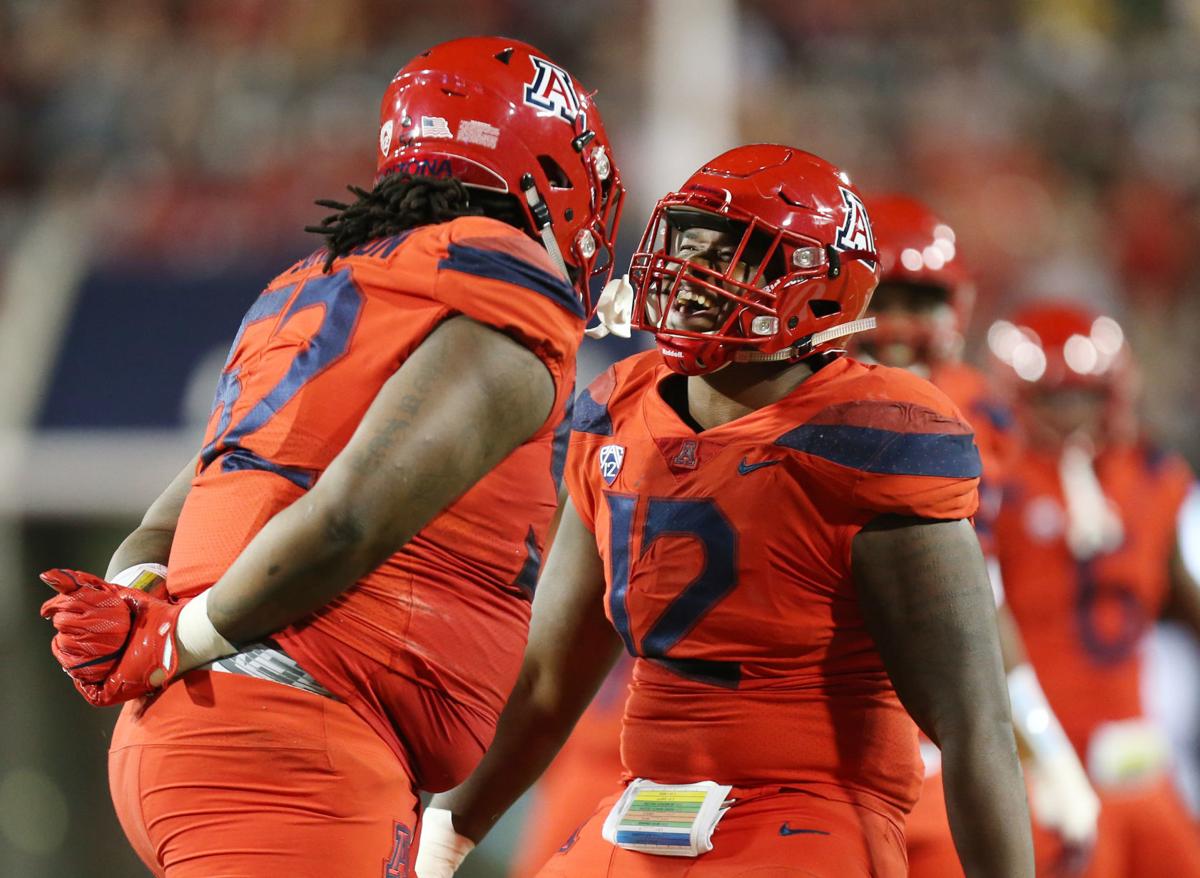 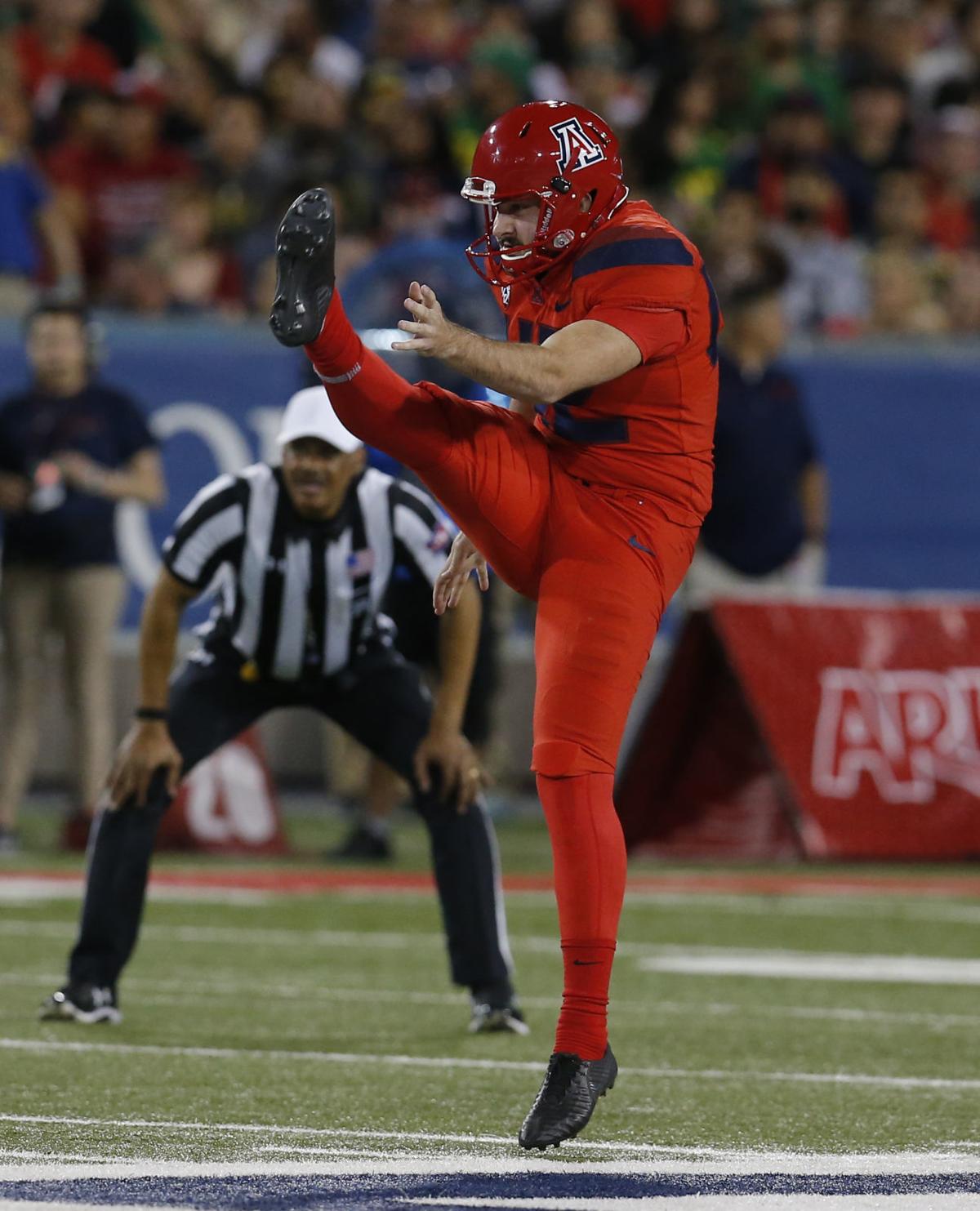