They are questions that cannot be definitively answered until the Arizona Wildcats take the field in Honolulu for the season opener.

But we’ve gotten enough hints in training camp to have some idea what the answers might be.

How often will Khalil Tate run in 2019? And how effective and explosive will he be when he does?

Arizona has conducted most of its 11-on-11 work behind closed doors. But in the glimpses that have been open to media observation, Tate has looked fast and spry — more like the 2017 version of the dual-threat quarterback who rushed for 1,411 yards than the ’18 version who was nicked up and managed only 224. Practice observers have noted the same.

“He looks comfortable. He looks healthy.”

The Wildcats had just completed their final scrimmage of training camp, going 100 plays, including special teams. Sumlin said Tate “took off a couple times … and made some first downs” — a revelation that Arizona fans should find encouraging entering the 2019 season.

Although other factors contributed to Tate’s decline in rushing attempts and yards, the quarterback said his health was the biggest one. He sprained an ankle early in Week 2 that bothered him for much of the season and caused him to miss almost two full games. He also told Sports Illustrated that he had shoulder and toe ailments at various points of the season and wasn’t 100% healthy until late April.

Tate had less than half as many rushing attempts last year (74) as the previous season (153). Asked how much he planned to run this year, Tate said:

“I’m looking to win games. Winning games is the most important thing as a quarterback. That’s definitely my main goal. That’s what I’m doing.”

Noel Mazzone seems keen on Tate recapturing his dual-threat form. Many fans blamed Mazzone, the Wildcats’ offensive coordinator and quarterbacks coach, for Tate’s drop-off as a runner. While the game plan for the 2018 opener mostly kept Tate in the pocket, the plan for the following week called for more QB runs. That’s when Tate hurt his ankle.

“He’s got very talented legs and a very talented arm,” Mazzone said Friday night. “If he could use them both during a game … he’s gonna be a really good football player.”

If Tate stays healthy and committed to running when the situation calls for it, Arizona easily could surpass expectations this season. As Tate said regarding the Aug. 24 opener at Hawaii, “We’ll get to showcase to the world what we can do.”

Tate feels up to the challenge, physically and mentally. He said he’s leaner this year, a development he attributed to “taking everything more seriously” in the offseason. Healthwise, he said, “I’m 100% right now.”

Tate added this caveat: “We haven’t played any games yet.”

Running back Wiley’s ‘got some wiggle’

Running back is by far Arizona’s deepest position. But freshman Michael Wiley has been so impressive in camp that the coaches can’t keep him off the field.

“He’s had some big plays in every live situation,” Sumlin said. “He’s proven to us that he deserves a chance to play at least special teams and get on a plane, go to Hawaii and see where he is.”

Wiley came to Arizona from Strake Jesuit College Preparatory in Houston. Listed at 5 feet 11 inches and 186 pounds, Wiley has displayed speed and shiftiness in the open field and natural hands as a receiver.

“Man, the guy’s got some wiggle to him,” Mazzone said. “What probably impressed me the most about him was his football IQ. He’s really got good knowledge of the game, got a great feel for it.”

Mazzone said Wiley and redshirt freshman Bam Smith, another Houston product, have done a “really good job” in pass protection as well. Whether that will earn them serious playing time in the backfield remains to be seen.

Redshirt junior J.J. Taylor is back after rushing for 1,434 yards and earning third-team All-America honors as an all-purpose player. Junior Gary Brightwell rushed for 525 yards, averaging 5.8 yards per attempt. And redshirt sophomore Nathan Tilford was one of the standouts of Saturday’s scrimmage. In a video tweeted by the school, Tilford broke several tackles during a long touchdown run.

“I think we have depth because we practice them,” Sumlin said. “We know what J.J. can do. We know a lot about Brightwell. We know quite a bit about Bam too; when he’s been in games, he’s been really effective. We’re trying to figure out what Wiley can do.

“We’ve got three or four guys right now that we feel comfortable putting in the game.”

In an unusual move, Sumlin conceded that he made a strategical error during last year’s game against Arizona State.

Sumlin twice called for two-point conversion attempts against the Sun Devils, in the second and third quarters. Each time, he was trying to extend Arizona’s lead from 12 to 14 points.

Both attempts failed, and the Wildcats ended up on the losing end of a one-point game.

“It’s probably something I shouldn’t have done,” Sumlin said. “I probably should have just waited till the fourth quarter, as I usually do.”

Sumlin said he doesn’t believe in going for two in the first half “most of the time” but that it also depends on his “feel for the game.”

“You’d like to wait till the fourth quarter to really start thinking about going for two,” Sumlin said. “It depends on where you are on that number. We got off of it early.”

Arizona Wildcats golfer and Tucson native Trevor Werbylo put himself in a comfortable position to make the final cut at the U.S. Amateur tourn…

It’s unclear if Arizona’s receivers will be better, but Wildcats’ wideouts are definitely bigger

The composition of the WR corps has changed under Kevin Sumlin, with a greater emphasis being placed on size and toughness.

DL coach Iona Uiagalelei says ‘there's no falloff’ between the first unit and the second, which is loaded with starting experience.

Greg Hansen: Wildcats will score plenty in 2019; will patchwork defense be enough?

The Star's columnist believes Arizona will torch teams offensively. As usual, however, the Wildcats' success may come down to defense. 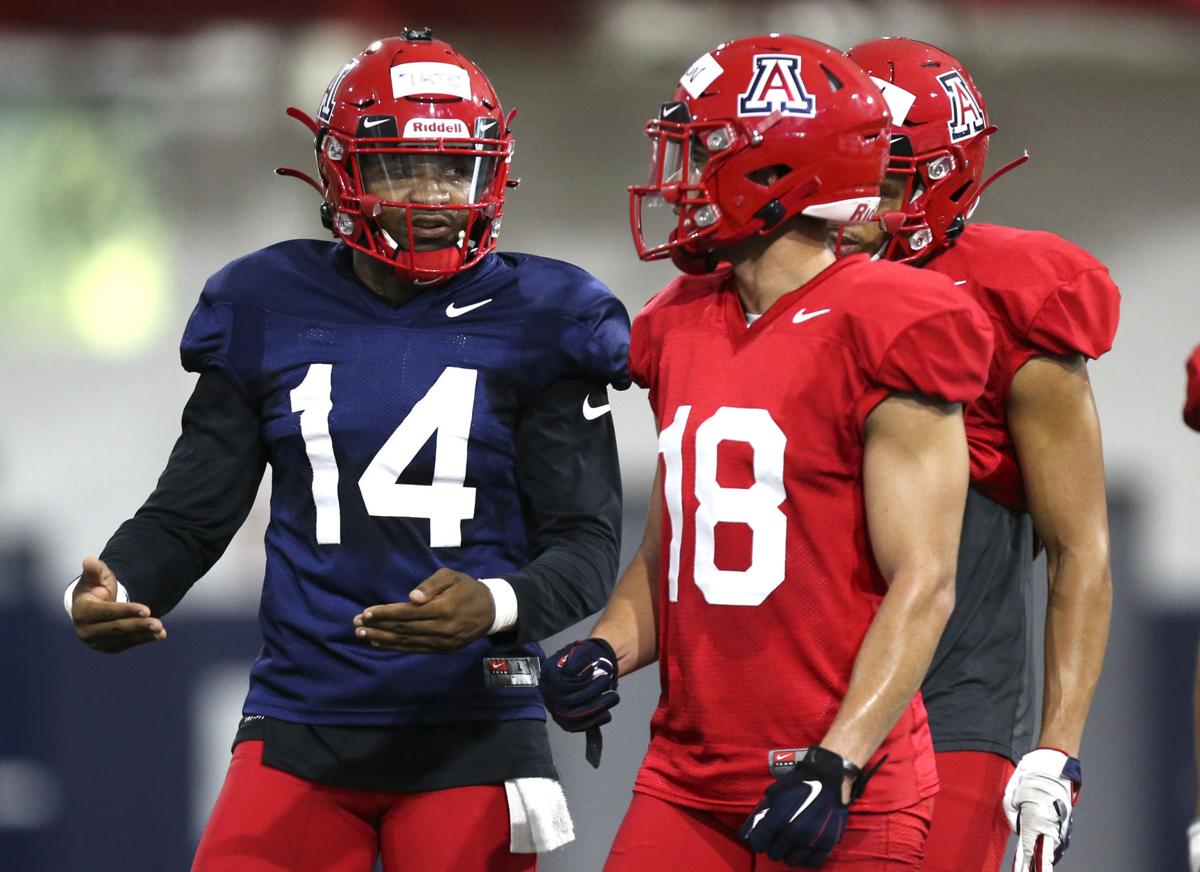 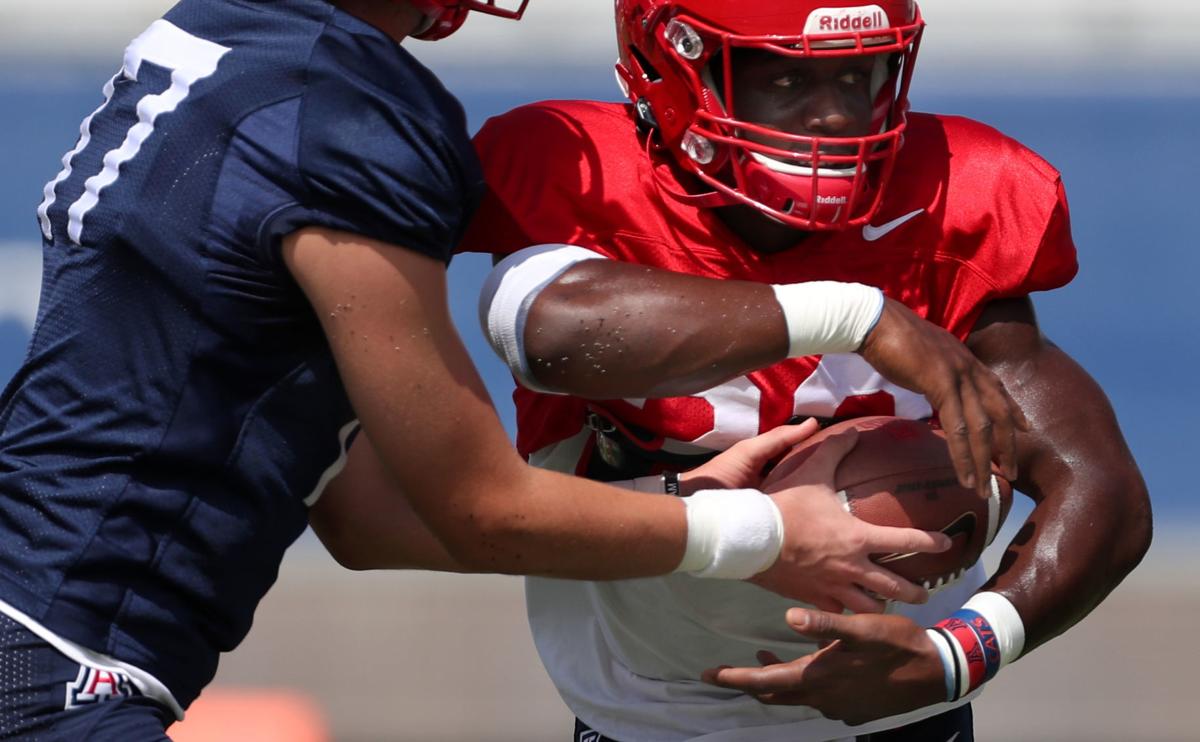 University of Arizona running back Nazar Bombata eyes his route while taking a handoff from quarterback Grant Gunnell during a pre-season practice, Tucson, Ariz., August 10, 2019. 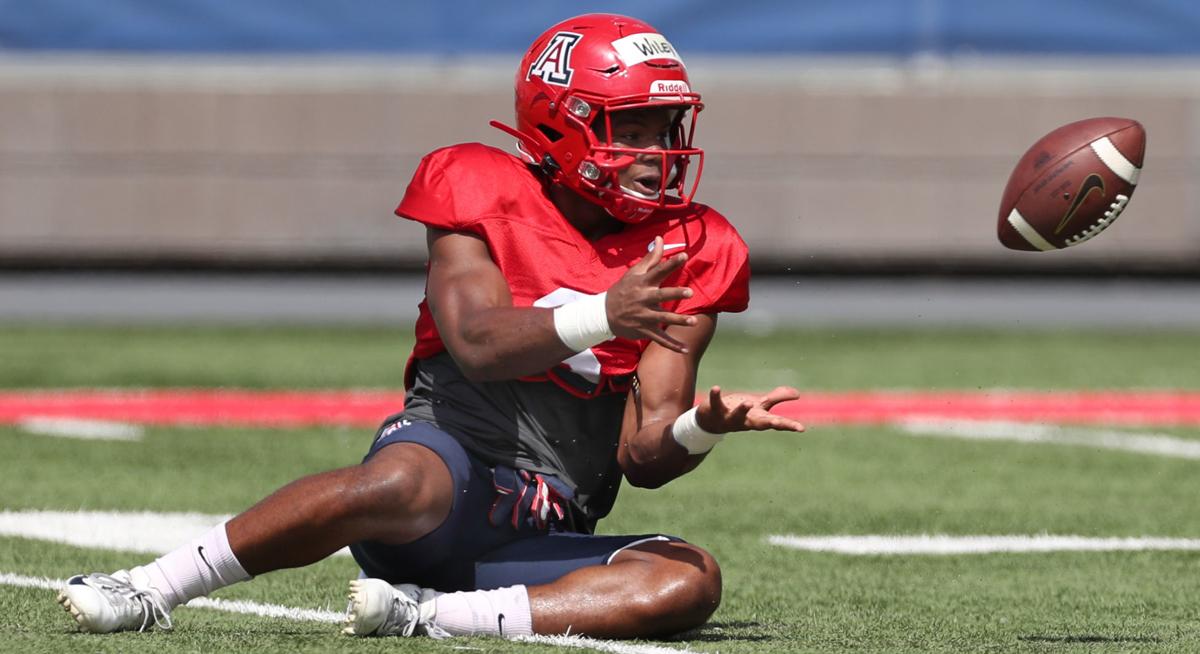 University of Arizona’s Michael Wiley slips to the turf but still manages to make the catch while running drills during a pre-season practice in Arizona Stadium, Tucson, Ariz., August 10, 2019.