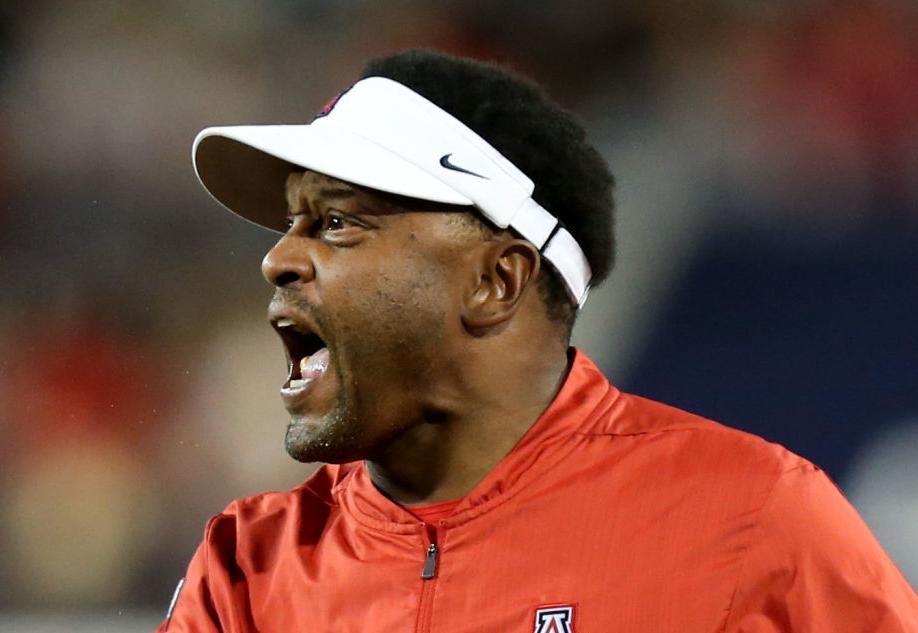 Arizona played its best game under Kevin Sumlin on Saturday, but the coach still sees areas where the UA can play better. 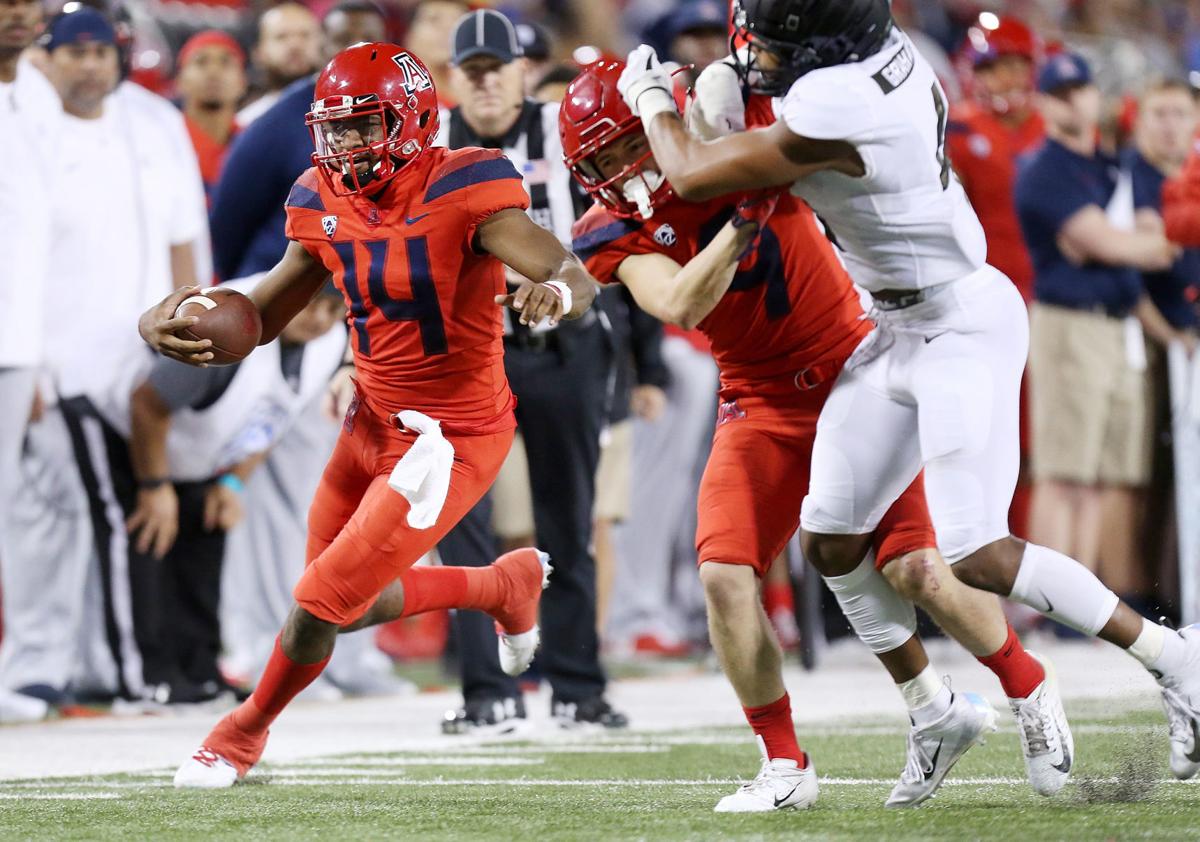 Arizona Wildcats quarterback Khalil Tate (14) bounces to the outside on a run with help from a Tony Ellison (9) block during the fourth quarter of the University of Arizona Wildcats vs. No. 19 University of Oregon Ducks college football game at Arizona Stadium, Oct. 27, 2018, in Tucson, Ariz. Arizona upset Oregon

After one of the best all-around efforts in recent Arizona football history, it’s hard to find fault. The Wildcats excelled in just every area across all four quarters in Saturday’s 44-15 victory over then-No. 19 Oregon.

But it wasn’t a perfect performance. It’s Kevin Sumlin’s job to figure out where his team can get better. That thought process was on his mind when he met the media Monday amid preparations for Friday night’s game against Colorado.

The most obvious place to look is the offense. Yes, the Cats scored 44 points. They easily could have had more.

Arizona took the ball away from Oregon twice in the first half and blocked a Ducks punt. The Wildcats’ worst field position on the ensuing possessions was their 49-yard line. Their best was the Oregon 6. All three drives ended in field goals instead of touchdowns.

“We’d like to get seven instead of three … off of any sudden-change or turnover situation,” Sumlin said.

“That’s something we’re aware of and we need to improve.”

Quarterback Khalil Tate, back in the lineup after a one-week absence to rest his sore ankle, completed 57.6 percent of his passes. That figure also could have been better.

Several times Tate tried to hit home runs when he could have settled for singles or doubles. The coaches continue to work with Tate on “just taking what the defense gives you,” Sumlin said.

“We had some underneath things,” Sumlin said. “He understands that.”

Tate’s accuracy was inconsistent, perhaps a byproduct of missing almost two full games. (Tate sat out the final two-plus quarters at Utah.) One example: His 17-yard completion to Thomas Marcus Jr. late in the first quarter might have been a touchdown if it had been thrown in front of him.

It was another aspect of that play that provided Sumlin with another teachable moment. The reception was the first of Marcus’ career. Sumlin thought the freshmen could have done a better job of securing the ball after the catch.

He spoke to Marcus about it soon after.

“It’s not like high school anymore,” Sumlin said. “You’re in the teeth of the defense. You need to put that ball way.

“He’s a big, strong guy. He can run. He’s gotta learn right there, you’ve got a first down. You can look to go, but right in the middle of the defense you need to cover that ball up, because he was swinging it everywhere.”

Turnovers could swing Friday’s game. The Buffaloes have a league-best plus-7 turnover margin. The Wildcats are plus-2. They’ve had a plus-2 edge in each of their past two victories.

Win for recruiting, too

The victory over Oregon could have a positive side effect: It might be a boon for recruiting.

“It doesn’t hurt, I’ll put it that way,” Sumlin said. “It can only help. The energy, the exposure, the vision becomes a little bit easier (to sell) when a young man is able to come in here and get a feeling for what this program can be.”

The visitors included four-star Houston cornerback Bobby Wolfe, who was committed to Texas A&M at the time. On Sunday, Wolfe tweeted that he was opening up his recruitment.

Georgia offensive lineman Jakai Clark, who once was committed to Auburn, tweeted a picture of himself in an Arizona uniform with the following message: “This might be it!! #BearDown.”

Neither tweet guarantees those players are coming to Arizona. But Saturday night’s result gives the Wildcats recruiting momentum they previously lacked.

It remains to be seen if Colorado’s best player will be available Friday. Sophomore receiver Laviska Shenault Jr. is considered day to day because of a toe injury that has kept him out the past two weeks.

Despite missing those games, Shenault leads the Pac-12 with 60 receptions for 780 yards. He also has 11 touchdowns, including five on the ground, where he sometimes operates as a wildcat quarterback.

Shenault is from DeSoto, Texas. He was recruited by Sumlin’s staff at Texas A&M but never offered, according to Shenault’s 247Sports recruiting profile.

Sumlin described Shenault as “exceptional” and “one of the most dynamic players” in the Pac-12.

“You look at how fluid he is, but he’s 220 pounds, too. He can create some real problems.”

Colorado, coming off a devasting loss at home to Oregon State, also is banged up in the secondary. Cornerback Chris Miller is out for the season, and safety Evan Worthington is in the concussion protocol. Another safety, Kyle Trego, must sit out the first half against Arizona because of a targeting foul.

The Wildcast, Episode 145: Will Arizona's thumping of the Ducks carry over against Colorado?

Justin Spears and Michael Lev recap Arizona's statement victory over then-No. 19 Oregon, which was a well-rounded performance by the Wildcats.…

The junior’s leveling of Oregon’s Dillon Mitchell was reminiscent of another tackle by a recent Arizona defensive back.

Improved play on special teams has led to improved field position; almost every time the Wildcats win that battle, they win the game.

Star reporter Michael Lev checks in with five storylines for the Arizona Wildcats' Friday night bout with Colorado, from one player's 'cramp c…

Taylor leads the nation in all-purpose yards; he also might be the best teammate on the UA roster.

The Star's Greg Hansen checks in with Kevin Sumlin's lineage, smothering punts — and a prediction.

Three things to keep an eye on when the Wildcats face the Buffs tonight at Arizona Stadium.

Notes and takeaways from warmups before the Wildcats host the Buffaloes at Arizona Stadium.

Follow The Wildcaster's live coverage from Arizona Stadium as the Wildcats welcome the Colorado Buffaloes to Tucson for a Friday night showdown.

Arizona played its best game under Kevin Sumlin on Saturday, but the coach still sees areas where the UA can play better.

Arizona Wildcats quarterback Khalil Tate (14) bounces to the outside on a run with help from a Tony Ellison (9) block during the fourth quarter of the University of Arizona Wildcats vs. No. 19 University of Oregon Ducks college football game at Arizona Stadium, Oct. 27, 2018, in Tucson, Ariz. Arizona upset Oregon