‘Everybody’s concerned’: Arizona coach Kevin Sumlin on football in the age of COVID
Share this

There is no football for the Arizona Wildcats football coach to coach at the moment, at least not in the traditional sense. Zoom meetings are plentiful, but they have their limits.

Still, his calendar fills up fast. Within a three-hour span Tuesday, Sumlin had his weekly swab test for COVID-19; spoke with a reporter for about a half-hour; met virtually with Pac-12 officials to discuss proposed schedules; and welcomed another verbal commitment to the program, the UA’s 19th addition since May 5.

The truth is, Sumlin and his staff have been engaged in an unprecedented campaign to prepare their team for a season that might or might not happen. And if it does, it won’t look like anything any of us has seen before.

In a world without the coronavirus pandemic, Sumlin would have been in Los Angeles on Tuesday, fulfilling his obligations for Pac-12 Media Day, which originally was scheduled for Wednesday. The Wildcats were supposed to start training camp this Friday. They were supposed to open the season Aug. 29 against Hawaii.

Instead, Sumlin is participating in a video conference from his office at the Lowell-Stevens Football Facility, awaiting the revised conference-only schedule and monitoring his squad from afar. Coaches aren’t allowed on the first floor of the building, where the players conduct a portion of their workouts; the players aren’t allowed on the third floor, where the coaches have their offices and meeting rooms.

Sumlin discussed the physical and mental state of his team, the challenges the pandemic has wrought and the possibilities for a modified season in an interview with the Star. The conversation has been lightly edited for context and clarity.

How would you describe the attitude of your players during this whole ordeal?

A: “It’s something that no one has experienced. Dennis (Polian, Sumlin’s chief of staff) and I have both been through hurricanes — complete disasters — where we’re probably a little bit better equipped to handle this, where we’ve moved complete teams, we’ve lived in hotels, we’ve done all kinds of stuff. But this is a completely different situation.

“Everybody’s concerned. The big thing is, every time we’ve talked, in any communication we’ve had, if you don’t feel comfortable with this situation, you don’t have to be here. Because we don’t know enough.

“We’ve got a couple guys doing that. Or their parents don’t (feel comfortable). I respect that.

“But I think what we’ve done with Dr. (Stephen) Paul, making all decisions based on our medical advice, how we returned to campus and what our testing protocol is here, our players feel as good as they can feel about it.

“And let’s be honest: You’ve got a combination of a lot of stressors. The first time a lot of these guys have ever been home-schooled — had to learn online. Went home after spring break, never came back.

“You’ve got a pandemic that everybody’s trying to explain. Some guys didn’t get it at the beginning, people getting sick, people dying. Then you’ve got social unrest.

“You’ve got a lot of stressors for young people and a lot of things that are happening that put football on the back burner. That’s what our communications been about.”

If a player comes to you or one of your assistants and says, “Coach, I’m just really feeling anxious about a lot of things, I’m stressed out,” what do you say to them?

A: “I say, ‘I get it.’ I’ve got a son that I talk to just about every day in Norman, Oklahoma, going through that. (Jackson Sumlin is a walk-on at Oklahoma, where Kevin Sumlin once served as an assistant.) I think it’s important.

“Our players know that. I think everybody tries to focus on ‘coaches only care about playing football.’ A lot of our guys here know that I’ve got a son involved in this too who has some concerns.

“I think that helps me from an understanding standpoint too, some of the things that he goes through.

“What we’re trying to do is let our guys know that players’ health and safety is the No. 1 thing here. And the reality is this: For the majority of these guys, based on where they’re from … you think about the hot spots that there are and where we recruit: It’s California, it’s here and it’s Texas. Because of our testing protocol, weekly, which they’re not going to get there, and how we’re approaching things from a nutritional standpoint, for the majority of guys here, it’s as safe as it can be — maybe safer than when they were at home.”

Major League Baseball already is having some issues. It seems like things are going well for the NHL and the NBA so far. The NFL is just starting up. Can college football pull this off?

A: “I think so. It’s a management situation. And let’s be honest: You’re gonna get challenges that we don’t really know.

“I think everybody’s learning from everybody right now. If you want to play, and you’re gonna stay in this bubble, it looks like that’s working. When you let some guys get out and do whatever they want …”

Can you create a bubble for college football, or something akin to a bubble?

A: “I don’t know. When you start talking about conference only, I think that was a major step by our league to control a lot of different variables. Because now we know the testing protocol. We share that information and then make decisions on playing games based on that — who’s playing, who’s not and if the game is going to be played.”

How would you describe your outlook about the viability of the season at this point?

A: “My job is to prepare these guys. And to keep them as safe as I can from a health standpoint. I’ve gotta approach this whole situation not with doubt but … get the education and make educated decisions from our doctors, from our medical staff, to keep our guys healthy.

“And I have to approach it as though we’re going to play. If we don’t play … you can’t wait until that point to get ready. So everything I’m doing right now is based on, ‘All right, what is the best thing for our student-athletes, physically, from a health and safety standpoint to progress them into a (state) to play?’ I have to approach it that way. And if we don’t play, then we just back off.

“I don’t think you can go the other way with it and be prepared. So, from my standpoint, I’m approaching this just like that. ‘Hey, we’re rolling.’ And then what do I need to do to give our student-athletes … the confidence and the health and safety (directives) that we need to continue day to day. Because the health and safety issue, whether you play football or not, is the most important (thing).

“A lot of these guys, even me, (we) get tested every Monday or Tuesday. I don’t know that if it wasn’t for this right here, this organization and our university and our leadership on campus, that we’d have that opportunity.

“People are looking at it like we’re forcing guys to do stuff. The other side of it is, I don’t know that there’s a lot of other people that are outside of this that are getting tested every week.”

The Wildcats' 2021 football recruiting class grew by one on Tuesday, when three-star Los Angeles defensive end Ja'Quez Harvey verbally committed to the UA.

Harvey is rated by 247Sports.com as the 81st-best defensive end and 115th-best prospect from California in the '21 recruiting cycle.

Arizona now has 19 commits for its '21 recruiting class, which is ranked sixth in the Pac-12 by 247Sports.com.

UA picked up all of its commits after May 5. In June and July alone, the Wildcats have received 15 commitments.

Burrola, a redshirt junior who started six games for the Wildcats last season, has expressed skepticism about the severity of the coronavirus – yet implied his scholarship was reduced because he voiced concerns about his safety

The lost season: How 5 ex-Wildcats are dealing with a summer sans minor-league baseball

Catching up with five former Arizona players whose professional careers have been disrupted by the coronavirus pandemic.

Tucson cameraman Darrin Pierce on life in NBA 'bubble,' run-ins with stars and the experience of a lifetime

Often seen at McKale Center working a handheld camera under the south basket near the UA bench, Darrin Pierce is now operating a “slash” camera near the corner of the floor for Turner-produced NBA games in Orlando. That means he’s been put inside the same “green” bubble as NBA players and coaches, and thus is subject to the most restrictions — and the least amount of recreational opportunities.

Why the Pac-12 Conference structured the schedule the way it did, including Arizona facing rival Arizona State in Week 1.

After visit to Tucson, JuCo OL Cade Parrish commits to Arizona Wildcats for 2021

The Arizona Wildcats picked up a commitment from Snow College offensive tackle Cade Parrish, who's now the UA's 20th commit for its 2021 football recruiting class.

Wildcats football recruiting has been on a roll since early May, but prospects from within the state remain elusive.

The Arizona Wildcats now have 21 players committed to their 2021 football recruiting class.

'This virus is no joke': Arizona receiver Jaden Mitchell says he tested positive for COVID-19

Arizona wide receiver Jaden Mitchell said that he was one of three UA players who tested positive for COVID-19 and lost 14 pounds during quarantine. 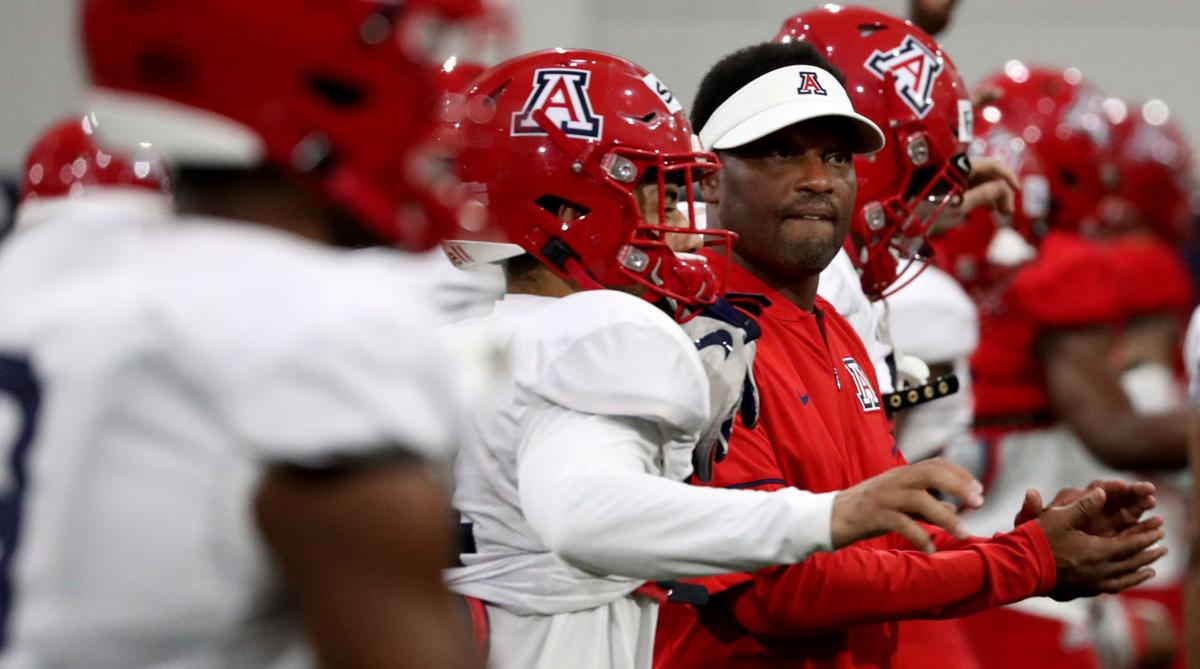 UA coach Kevin Sumlin has a son who is a walk-on at Oklahoma this year. “A lot of our guys here know that I’ve got a son involved in this too who has some concerns. I think that helps me from an understanding standpoint …,” Sumlin says. 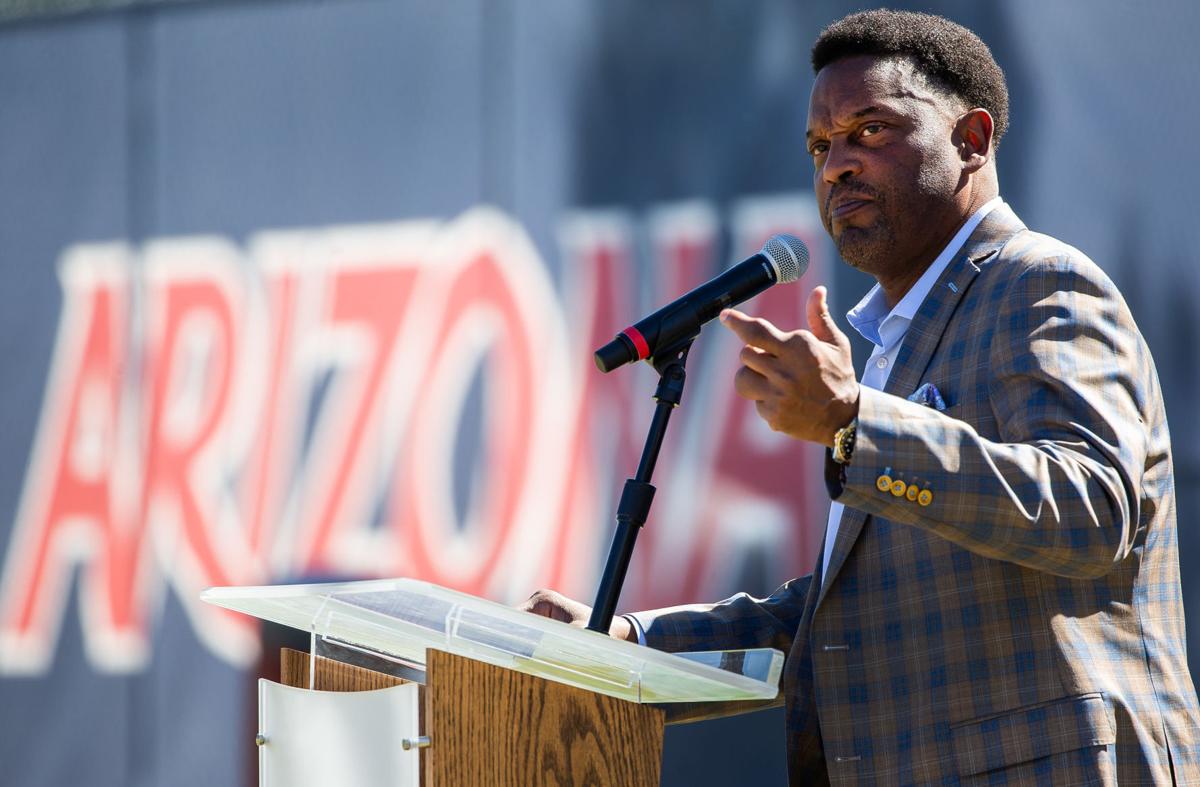 Arizona coach Kevin Sumlin says he thinks there can be a 2020 season. “If you want to play, and you’re gonna stay in this bubble, it looks like that’s working,” Sumlin said.