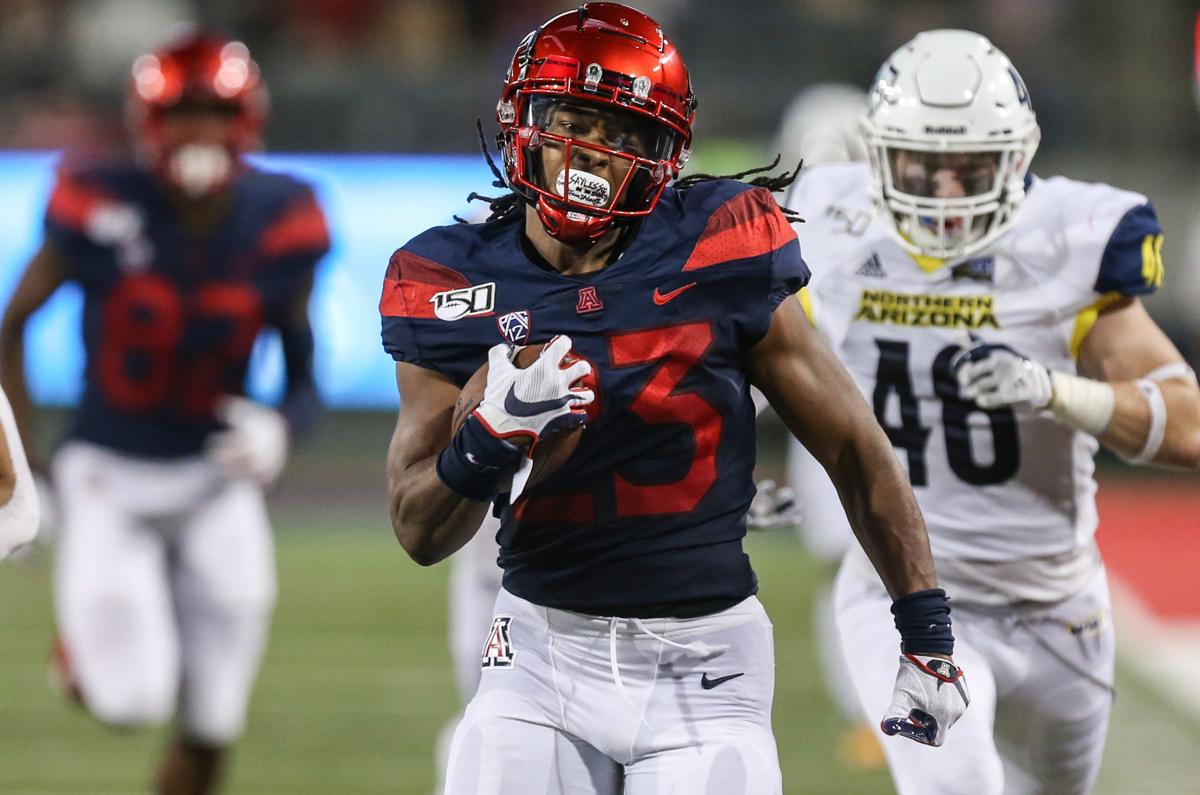 Arizona Wildcats running back Gary Brightwell (23) makes a sprint towards the end zone in the first quarter during NAU Lumberjacks vs. Arizona Wildcats football at Arizona Stadium, Tucson, on Sept. 7, 2019. 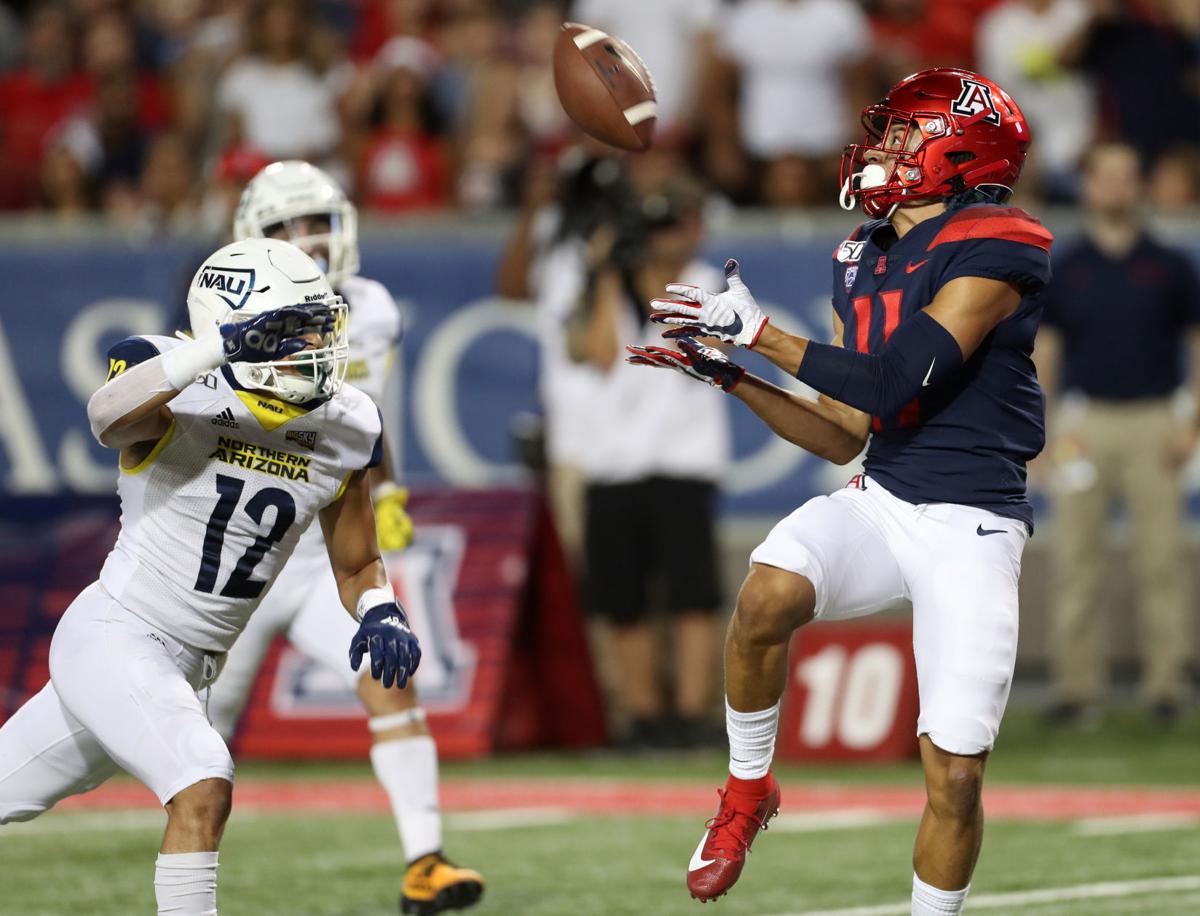 Arizona Wildcats wide receiver Tayvian Cunningham (11) reaches for a pass to score the team's first touchdown of the night during NAU Lumberjacks vs. Arizona Wildcats football at Arizona Stadium, Tucson, on Sept. 7, 2019.

While the stats website malfunctioned late in the second quarter, the UA offense kept on clicking.

The Cats compiled 51 points before halftime, the most in school history. They rolled to a 65-41 victory over the Lumberjacks in the home opener at Arizona Stadium, at least temporarily taking the heat off Kevin Sumlin and his staff.

Arizona finished with 720 yards of offense, falling 52 short of the school record set against NAU in 2015. The Wildcats had 431 yards on the ground

Arizona continued its dominance of NAU, winning for the 14th straight time in the series. The Wildcats had won by at least 31 points in each of the previous four meetings.

Arizona QB Khalil Tate after the win over NAU: pic.twitter.com/l9xrhDuVXa

"It felt good," quarterback Khalil Tate said. "I feel like that was something that we definitely needed as a team. (But) we didn't play all that well in all aspects. There’s definitely room for improvement."

If there were any negatives, the defense continued to struggle at times, albeit with a lot of backups in the lineup. Arizona also committed 11 penalties for 127 yards.

"I'm happy about the win. But there's a lot of things that I'm not very happy about," Sumlin said. "I addressed that in the locker room, and we're going to continue to address that.

"Too many penalties. Too many selfish penalties – things that we're not going to tolerate. Yeah, we won the game. But you give up 41 points, a bunch in the second half. We’ve got some starters out there. To give up 41 in that fashion is not OK. And the penalties that we had today is not OK.

A much bigger test comes next Saturday. Arizona hosts Texas Tech, its first non-conference opponent from a Power Five league since 2012. The Red Raiders are 2-0. Their quarterback, sophomore Alan Bowman, has passed for 696 yards and five touchdowns. Texas Tech defeated UTEP 38-3 earlier Saturday.

Arizona struggled in multiple facets during a disappointing season-opening loss at Hawaii on Aug. 24. Fans were furious that the team didn’t appear to have improved after going 5-7 in Sumlin’s first season.

Whether the Wildcats truly took a step forward Saturday remains to be seen. They certainly looked more explosive in the home opener than the season opener.

Arizona scored touchdowns on each of its seven first-half possessions. The streak ended on the Wildcats’ first possession of the second half, but only because of a dropped pass on third down.

Tate completed 14 of 17 passes for 138 yards and two touchdowns before calling it a night in the third quarter. Freshman Grant Gunnell, making his UA debut, went 9 of 11 for 151 yards and three scores.

Gary Brightwell (141 yards) and J.J. Taylor (102) each surpassed 100 yards rushing, needing only 15 combined carries to get there. Fellow tailback Bam Smith scored a pair of touchdowns, one on the ground and one through the air.

"We did well," Tate said. "The O-line did well, blocking their guys; they had a hat on a hat. The receivers did a great job; they’re definitely growing up, running the correct routes, getting open.

Arizona came out firing on offense and never let up.

The Wildcats needed only five plays to take a 7-0 lead. Tate hit a streaking Tayvian Cunningham for a 47-yard touchdown to cap a 77-yard drive. It was the first UA touchdown for Cunningham, who arrived in Tucson in June after transferring from Sacramento City College. Cunningham scored again on an 8-yard reception in the second quarter.

NAU’s first possession ended with a sack and a punt – something Arizona didn’t do against Hawaii until the Rainbow Warriors’ last possession. Jalen Harris notched the sack, chasing down a scrambling Case Cookus.

Arizona needed only two plays this time to reach the end zone again. Brightwell scooted around left end and down the sideline for a 94-yard touchdown run. Brightwell tied Nic Grigsby for the second-longest rush in school history. Grigsby’s also came against NAU, in 2009.

After the Lumberjacks scored to make it 21-7, the Wildcats pieced together a methodical counterstrike. The 16-play, 80-yard drive ended with Tate’s 1-yard walk-in touchdown.

With the score 35-10 and 7:56 remaining in the half, Arizona turned to Gunnell. The record-setting passer from Texas calmly led a 10-play, 75-yard TD march. Gunnell finished it with a 9-yard pass to Drew Dixon. It was Gunnell’s first career TD pass and Dixon’s first score.

A safety and Gunnell’s 75-yard touchdown pass to Thomas Reid III – who recently was put on scholarship – bumped Arizona’s first-half point total over 50. The Wildcats’ previous record for points in a half was 49 against Idaho on Aug. 31, 2008. Arizona won that game 70-0.

Tate returned for the first two series of the third quarter before again passing the baton to Gunnell. Junior Rhett Rodriguez finished the game.

• UA sophomore safety Christian Young was disqualified in the second quarter after drawing his second unsportsmanlike-conduct penalty. Young made a gesture with his hands near the NAU bench after breaking up a pass. Troy Young started in Christian Young’s place in the second half.

• Freshman linebacker Derrion Clark was ejected for targeting in the fourth quarter. He’ll have to sit out the first half against Texas Tech.

• Reserve safety Jarrius Wallace got banged up early in the third quarter and had to be helped off the field.

• Starting tight end Bryce Wolma had a boot on his left foot during early warmups and did not dress. Redshirt freshman Zach Williams got most of the work at tight end in the first half.

• Cornerback Lorenzo Burns returned to the starting lineup. Burns left the Hawaii game in the third quarter because of injury and did not return.

• Arizona played numerous freshmen, taking full advantage of the rule that allows players who haven’t previously redshirted to play in up to four games without losing a year of eligibility. Whether those freshmen end up redshirting this season remains to be seen.

Check out photos from the game here:

Live tweets from the Arizona Wildcats' home opener against NAU.

Notes, quotes and stats from the Arizona Wildcats’ 65-41 victory over NAU

Pertinent factoids, words and numbers from the Cats' triumph over the Lumberjacks in the home opener.

Here's a look at how colleges fared.

The Star's exclusive, in-depth review of the Cats' performance in their win over the Lumberjacks.

Arizona Wildcats running back Gary Brightwell (23) makes a sprint towards the end zone in the first quarter during NAU Lumberjacks vs. Arizona Wildcats football at Arizona Stadium, Tucson, on Sept. 7, 2019.

Arizona Wildcats wide receiver Tayvian Cunningham (11) reaches for a pass to score the team's first touchdown of the night during NAU Lumberjacks vs. Arizona Wildcats football at Arizona Stadium, Tucson, on Sept. 7, 2019. 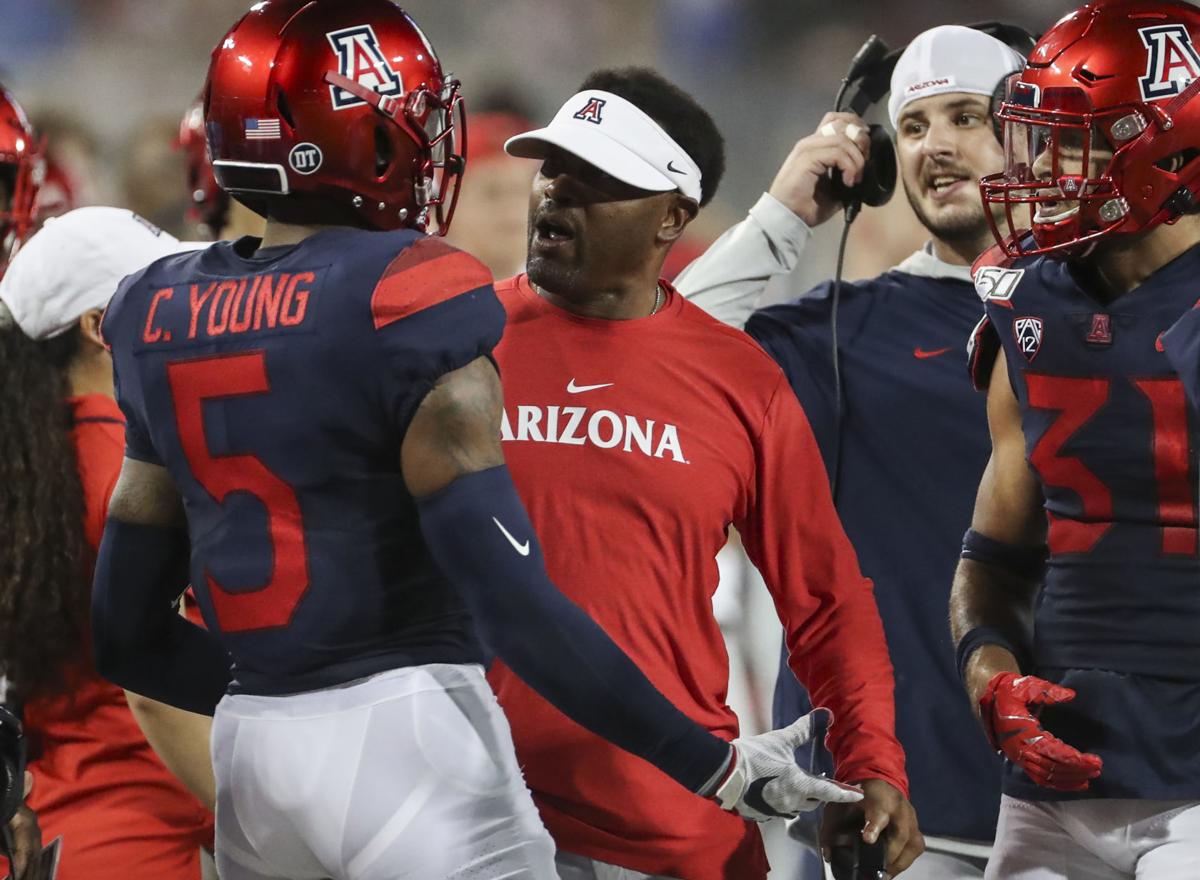 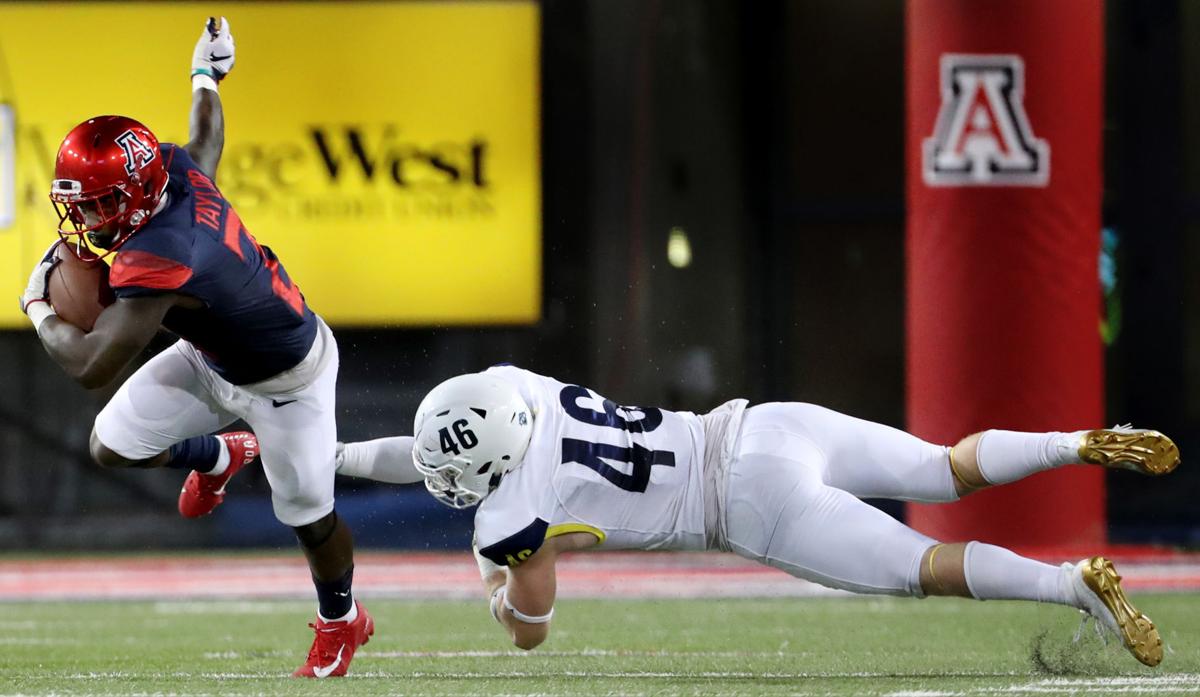 Arizona running back JJ Taylor (21) spins away and leaves Northern Arizona linebacker Harrison Beemiller (46) haning on a run up the middle in the second quarter of their football game at Arizona Stadium, Tucson, on Sept. 7, 2019.