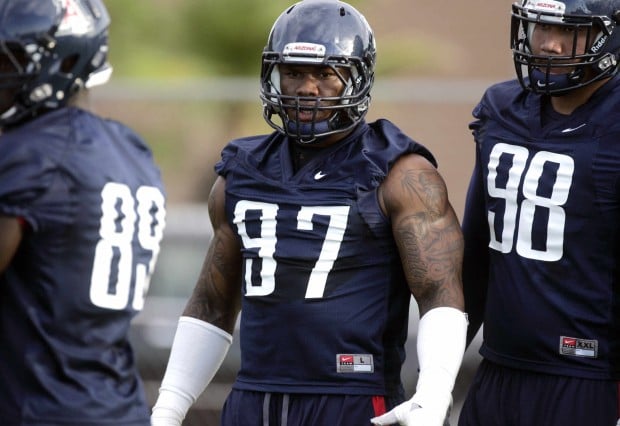 University of Arizona football player Mohammed Usman looks on during the first 2011 season practice at the Rincon Vista practice complex on August 4, 2011. 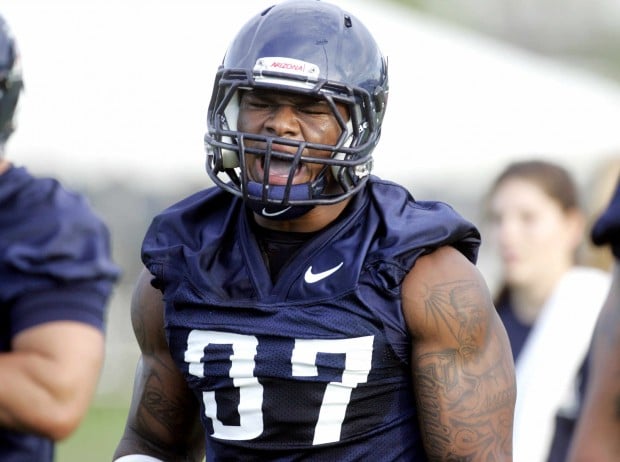 Mohammed Usman hopes to be the next member of his family to fight in the UFC, and he recently took another step forward to achieving that goal.

The former Arizona defensive lineman is one of several fighters featured on the 30th season of "The Ultimate Fighter," a TV show on ESPN+ that pairs up top up-and-coming MMA fighters, with an opportunity to sign a UFC contract.

The 238-pound Usman, who played football at the UA under then head coach Mike Stoops during the 2010 and '11 seasons, is one of the heavyweight fighters on coach Julianna Peña's team; opponents are on Amanda Nunes' team.

Set at the UFC Apex Center in Las Vegas, Usman, the younger brother of UFC welterweight champion Kamaru "Nigerian Nightmare" Usman, advanced to the second round of the show after beating Mitchell Sipe by unanimous decision in the latest episode of The Ultimate Fighter, eliminating the fellow heavyweight from the field.

"He is the main reason that I fight."@Umohammed97 reflects on the inspiration he continues to receive from his son, who died at three years old.Stream the third episode of #TUF30 now ▶️ https://t.co/LSmMV252PU pic.twitter.com/s2qaYn4W4t

In the third episode of the new season, Usman revealed to teammate Chantel Coates that his two-year-old son Nash died from a drowning accident in 2019.

"That's my motivation. ... He's the main reason why I fight. When I first had him, I would just look at him in his eyes and was like, 'Your dad is not a normal person. I'm going to show that your dad is gifted and he's blessed,'" Usman said on the third episode.

Usman, who was born in Nigeria before his family moved to Texas, will have a chance to earn a six-figure contract during a finale episode that has yet to be scheduled.

Arizona's 2023 recruiting class is loaded with players who are projected to play in the defensive backfield.

The 33-year-old retired in 2019 after nine seasons with the Patriots, but returned in 2020 when Brady went to the Buccaneers.

Williams started his career at Auburn before transferring to Florida State last season.

Tucson's defense leads the Sugar Skulls to a 39-32 win over the Vegas Knight Hawks.

Julian Savaiinaea is the 14th player and third from the state of Hawaii to commit to the U of A in the class of 2023.

Brandon Johnson is Arizona's 12th commitment for the 2023 class and the fifth recruit out of California.

Another safety has committed to the Arizona Wildcats' 2023 recruiting class.

The shooting happened in a busy commercial area along Interstate 10 about 8 miles south of Phoenix Sky Harbor International Airport.

University of Arizona football player Mohammed Usman looks on during the first 2011 season practice at the Rincon Vista practice complex on August 4, 2011.