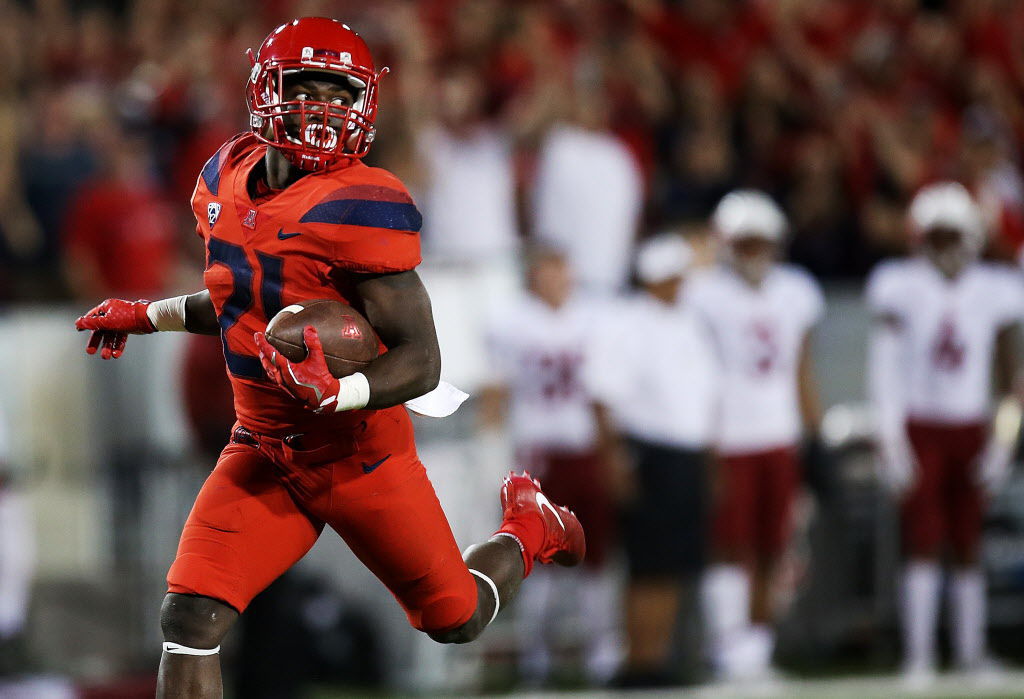 Running back J.J. Taylor and the Arizona Wildcats have rushed for an average of 324.4 yards per game this season. They will face a Purdue Boilermakers defense that is allowing 133.3 yards per game, which is 100 yards fewer than their 2016 average. 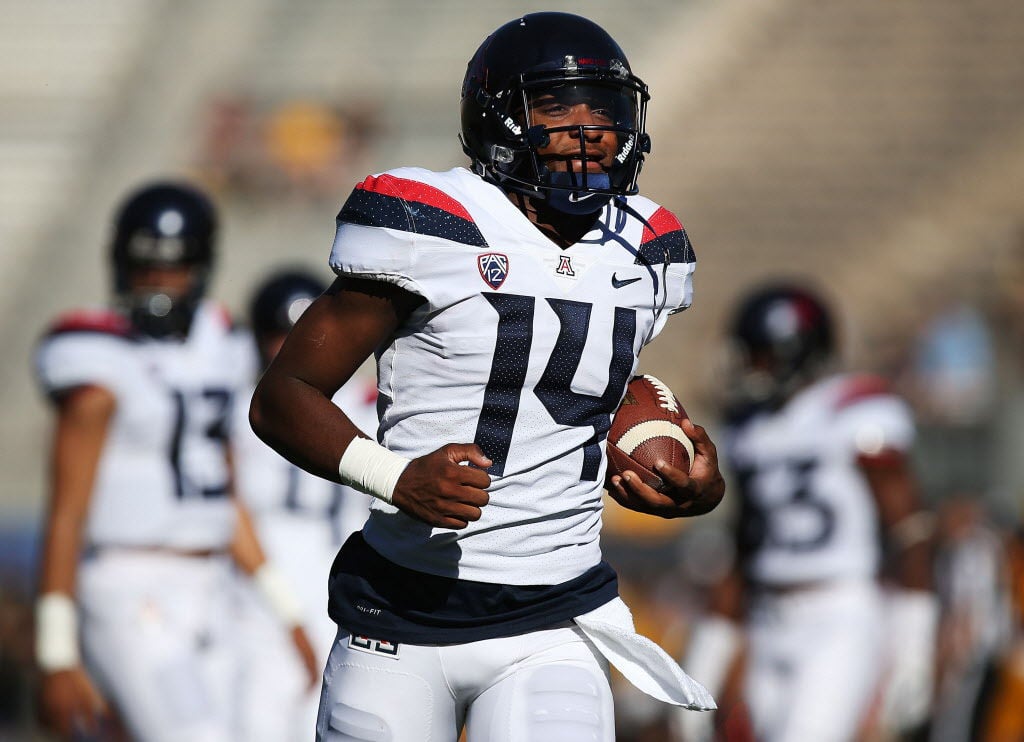 In 10 games, Arizona Wildcats quarterback Khalil Tate has rushed for 1,353 yards. He will go up against a Purdue defense that has held four of its past five opponents under 100 yards. 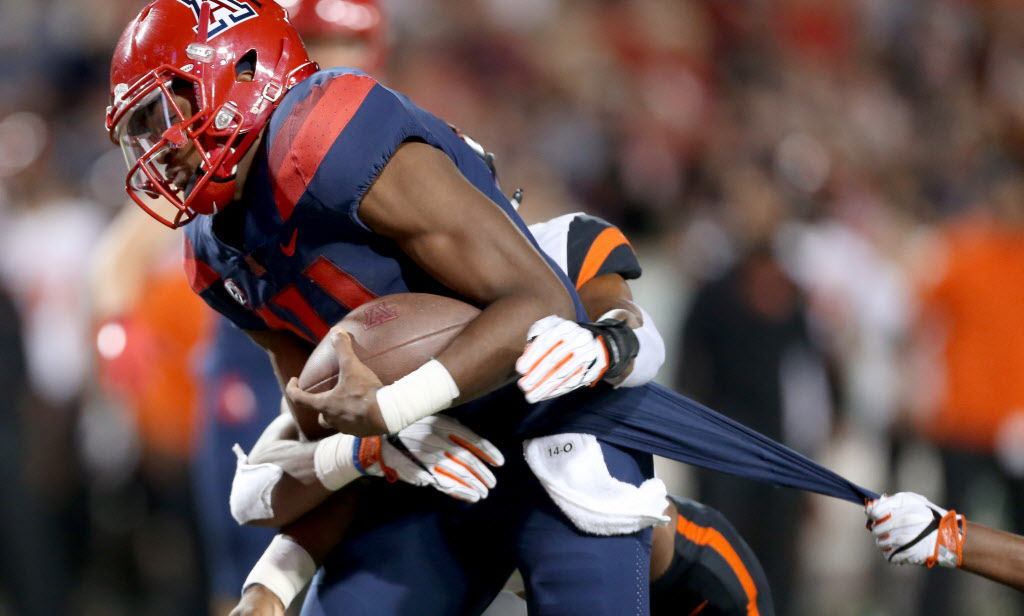 Arizona quarterback Khalil Tate (14) drags a couple of Oregon State defenders the final yard or two into the end zone on touchdown run in the second quarter of their Pac-12 game at Arizona Stadium, Saturday November 11, 2017, Tucson, Ariz.

The Arizona Wildcats rank third in the nation in rushing offense. Purdue ranks 29th in rushing defense. You needn’t look further to find the area where Wednesday’s Foster Farms Bowl will be won.

The Boilermakers (6-6) will devote almost all of their manpower to slowing the Wildcats’ Khalil Tate-led rushing attack, which averages 324.4 yards per game. It’s nothing Arizona hasn’t faced before.

“We’ve seen nine in the box over and over and over,” UA senior tailback Nick Wilson said Tuesday during a news conference to preview the Foster Farms Bowl.

As Wilson noted, the Wildcats (7-5) have succeeded most of the time regardless. They have rushed for more than 500 yards twice, more than 400 twice and more than 300 three times. Only twice has Arizona failed to rush for at least 200 yards. Both games resulted in losses.

Behind a veteran offensive line, a legitimate dual-threat quarterback and a deep stable of running backs, the UA became a dominant run team this season — the sort of offense that could impose its will on opponents no matter how many defenders crowded the line of scrimmage.

As Alsadek put it, Arizona has been able to take away the other team’s “manhood” at times this year. “It’s a pretty cool feeling,” he said.

Alsadek knows that level of exertion will be required to move the ball consistently against a vastly improved Purdue defense. UA coach Rich Rodriguez noted the size and experience the Boilermakers have up front, concluding: “They’ve got a lot of grown men.”

Apprised of that compliment, Purdue senior defensive end Danny Ezechukwu smiled and said: “Thank you, Coach Rodriguez.” But it’s what Ezechukwu said next that reveals the secret behind one of the biggest defensive turnarounds in the nation.

“I feel we play really, really hard,” Ezechukwu said. “That’s one thing that Coach (Jeff) Brohm and his staff honed in on when they first got to West Lafayette. His message was to play hard. Wins and losses will come, and things will happen, but people will recognize when you play hard. We definitely hang our hats on that.”

Brohm took over a downtrodden Purdue program last December; the Boilermakers had won three or fewer games each of the preceding four seasons.

After watching some film from the 2016 season, Brohm noticed that his new team’s effort level wasn’t always where it needed to be. He and his staff aimed to remedy that the moment spring practice began.

“For us, it’s all about playing hard, playing tough, playing smart and making sure that we try to win that battle every game,” Brohm said. “If we do, we’ll have a chance to win. If we don’t do that, it’s probably going to be a long day.”

Brohm and the defensive coaches, led by co-defensive coordinator Nick Holt, placed a huge emphasis on stopping the run. Purdue was terrible at it last season, allowing 238.4 yards per game.

“He tries to keep it really simple for us to play downhill, stay in our gaps and honor our run integrity,” Ezechukwu said. “Taking on blocks. Depending on the guy next to you – knowing that he’ll be there. You don’t have to play outside of yourself.”

With mostly the same personnel, Purdue’s run defense shaved more than 100 yards off its 2016 average. The Boilermakers allow 133.3 rushing yards per game and have held four of their past five opponents under 100.

Purdue held 10 of its 12 regular-season foes under their final rushing averages, in two cases by more than 100 yards. Purdue limited Week 1 opponent Louisville to 146 yards; the Cardinals would average 249.9 over the course of the season.

That game is instructive because Louisville’s offense features star quarterback Lamar Jackson, the 2016 Heisman Trophy winner. Jackson and Tate aren’t exactly alike, but their skill sets and the way their teams use them are similar.

Jackson rushed for 107 yards on 21 carries but did more damage with his arm, passing for 378 yards and two touchdowns. Purdue had spent the entire offseason gearing up to stop him. With Jackson accumulating 485 total yards, and the Cardinals winning 35-28, Brohm viewed that endeavor as a failure.

But that game was a long time ago, and the Boilermakers have gotten better since. They feel better equipped to contain Tate, who in 10 games has 1,353 rushing yards – just 90 fewer than Jackson accumulated in 12.

Not that it will be easy by any stretch. Brohm termed taking on Tate as an “extreme challenge.”

“He’s going to make one guy miss,” Brohm said. “You’re going to need multiple people to try to corral him and tackle him and contain him. As soon as you try to do that too much, here comes the play-action pass off of it.”

Having been victimized by Jackson’s passing, Purdue is wary of focusing too much attention on Tate. He has taken advantage of one-on-one coverage at times and gladly has handed the ball off when his reads call for it. Running backs Wilson, J.J. Taylor and Zach Green have combined for 1,723 yards and 22 touchdowns.

“It’s going to be a dogfight,” Wilson predicted, “from the beginning to the end.”

• Inside: A look at the last time the teams played and Wednesday night's starters, matchups and storylines /  Pages B3-B5

Purdue, Arizona’s opponent in the Foster Farms Bowl, has one of the most improved defenses in the country.

Star columnist Greg Hansen checks in with his weekly mailbag as the Wildcats clash with the Purdue Boilermakers in the Foster Farms Bowl.

Foster Farms Bowl storylines: The oral history of one bad call that led Arizona to Santa Clara and RichRod's take on players sitting out bowl games to protect draft stock

The Arizona Daily Star's Michael Lev and Justin Spears break down the key storylines coming to prepare you for the Foster Farms Bowl.

The sophomore’s core values – his humble demeanor, team-first attitude and serious approach on and off the field – come from parents who raised him right.

Greg Hansen: Arizona, Purdue are country cousins when it comes to football pedigree

Notes and takeaways from warmups before the UA faces Purdue at Levi's Stadium.

The Wildcats drop four out of their five finals games and finish the season 7-6.

The Cats continue to have trouble getting opponents off the field, an issue that resurfaced – and proved costly – in the Foster Farms Bowl.

Running back J.J. Taylor and the Arizona Wildcats have rushed for an average of 324.4 yards per game this season. They will face a Purdue Boilermakers defense that is allowing 133.3 yards per game, which is 100 yards fewer than their 2016 average.

In 10 games, Arizona Wildcats quarterback Khalil Tate has rushed for 1,353 yards. He will go up against a Purdue defense that has held four of its past five opponents under 100 yards.

Arizona quarterback Khalil Tate (14) drags a couple of Oregon State defenders the final yard or two into the end zone on touchdown run in the second quarter of their Pac-12 game at Arizona Stadium, Saturday November 11, 2017, Tucson, Ariz.