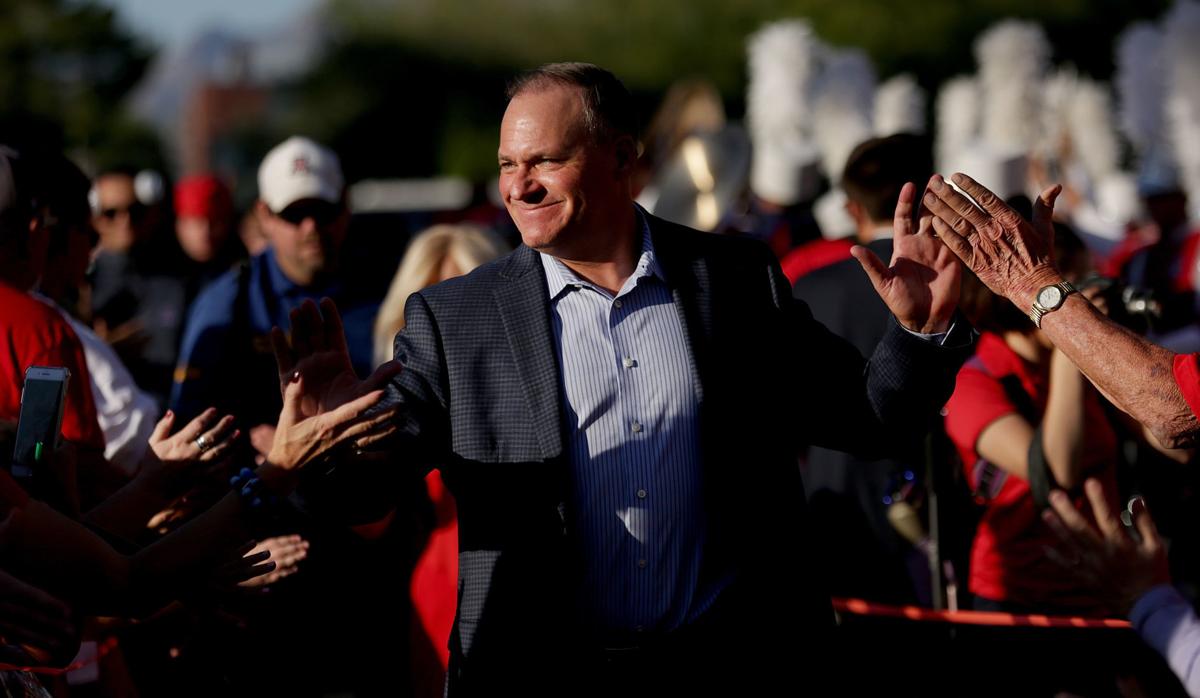 The lawyer for the plaintiff in the Title IX suit extended an apology to former UA coach Rich Rodriguez, above, saying she spread what she now believes to be false information.

and Rodriguez’s wifecenters on former UA running back Orlando Bradford’s attacks against women. The plaintiff’s lawyer extended an apology to Rich Rodriguez, above, and his wife. 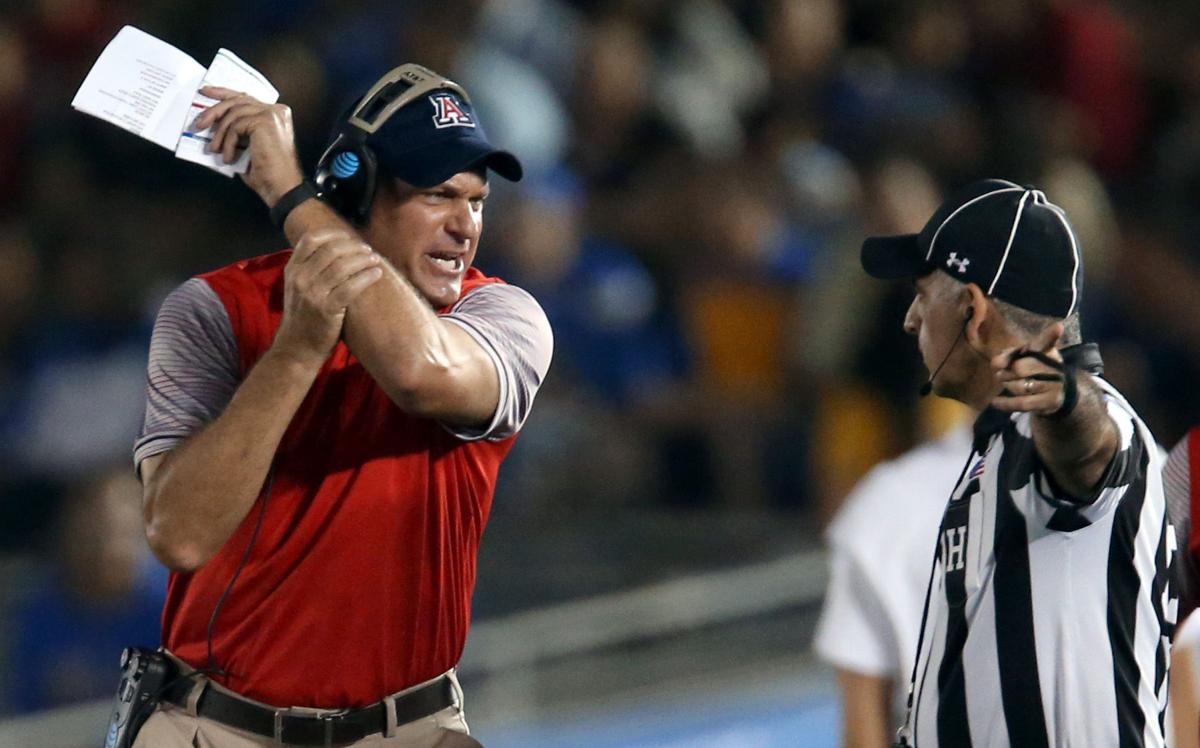 Rodriguez was the subject of two investigations in 2017: one for mistreating players, the other for running a hostile workplace. 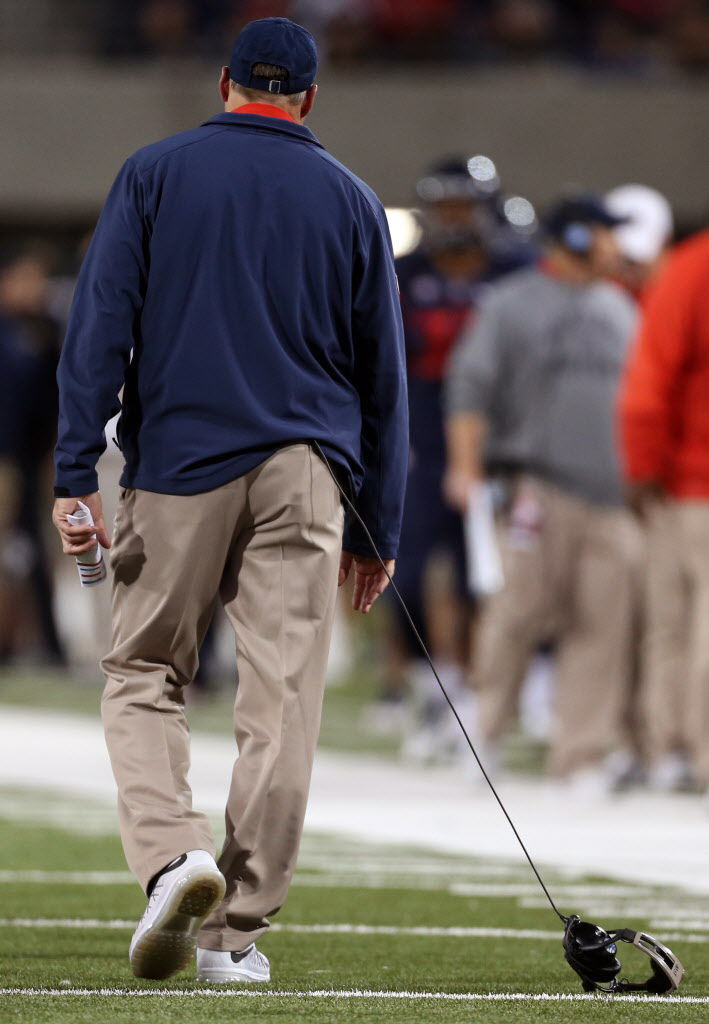 The UA paid Rodriguez a $6.2 million buyout, which bothers at least one donor who believes his money was misspent.

In late September, a week or so before quarterback Khalil Tate was discovered sitting on the UA’s bench, Rich Rodriguez and his wife Rita drove to Culinary Dropout, Tucson’s new “it” restaurant, for a rare night out during the football season.

It was a summit of Tucson power brokers. The Rodriguezes were seated with congresswoman Martha McSally, UA president Robert C. Robbins, UA athletic director Dave Heeke and financier Humberto Lopez, who was one of RichRod’s few connections to the Tucson business community.

The ambitious and engaging Robbins, who stood on the turf at Arizona Stadium and helped to lead cheers during the season opener against NAU, talked about a plan in which he would build an alumni center and hotel on property adjacent to the school’s sand volleyball facility, one of the four gateways to campus.

The message was not a subtle one: Robbins expected excellence in football and on every corner of the campus. He was building, not treading water the way in which Arizona’s football program had evolved.

The UA Office of Institutional Equity began an investigation of Rodriguez’s behavior and the work environment in the football program. There’s more: the parent of a former UA player told me Friday that his son participated in a campus investigation with the Office of Institutional Equity last February. The player was asked about Rodriguez’s treatment of players.

At that time, Heeke was still the athletic director at Central Michigan and Robbins was CEO of the Texas Medical Center.

The February investigation was triggered by comments the former player made during an exit interview with former UA athletic director Greg Byrne, who, before he left for Alabama, did not extend Rodriguez’s contract for what is often an automatic roll-over through five years.

In effect, the clock on RichRod was ticking when Heeke and Robbins assumed their positions at the school.

When Rodriguez was fired Tuesday evening, the school announced it would pay him $6.28 million to go away rather than fire him for cause and let the attorneys slug it out.

“If you used that same money to hire a law firm to defend a ‘for cause’ termination, it would be worth it from the standpoint of institutional integrity – even if the UA lost,” said Bob Bockrath, former athletic director at Alabama, Cal and Texas Tech, and the No. 2 man in the Arizona athletic department from 1981-91.

“The same old problem comes up — there is so much money in intercollegiate athletics that so-called senior administrators, presidents and ADs, never have to make a hard decision. Just pay off and move to the next chapter.

“What is wrong here? Who wrote an employment contract that didn’t include provisions for standards of moral conduct that would not allow conduct like his to warrant termination ‘for cause’?”

For better or worse, it has become common to throw money at problems and move on.

Arizona State fired football coach Todd Graham for, it appears, the high crime of being “average.” Graham was paid about $12 million to go away.

RichRod, who lost 19 of his last 31 games at Arizona, wasn’t even average.

One prominent UA booster said the payoff to RichRod has given him pause to reconsider his financial support of the athletic department.

“I’d offer a million for him to go away and let RichRod fight it,” he told me. “Now I’m wondering how they are using my donations. Right now, I am at a total stop until I get some answers. I’m sick of the glad-handing bull. We need a new culture, that’s for sure. This secrecy bull … the basketball and track stuff, I feel like I’m part of some third-world university program now.”

Robbins and Heeke have a lot of rebuilding to do to restore faith in the UA athletic program, probably more so than any time in school history.

In the Byrne years, 2010-16, Arizona’s two most high-profile football boosters, Jim Click and Los Angeles Angels owner Arte Moreno, removed themselves from involvement. Both had been visible game to game on the sideline during the Mike Stoops years.

Neither made a move to support RichRod, nor did he engage them.

In addition to hiring a suitable football coach, one of Heeke’s top challenges will be to cultivate Click and Moreno, and other donors of note who have stepped back.

Has the business of college football changed that much? DHR said that paying six-figures for its services is necessary. Without a search firm, DHR says “it’s like building a stadium without an architect.”

To the contrary, many of the top names in Pac-12 football didn’t require much of a search at all.

UCLA discovered Terry Donahue on its staff. Oregon’s Mike Bellotti and Chip Kelly were hired from within the UO program. Utah’s Kyle Whittingham spent 11 years on the Utes staff.

Unfortunately, Arizona doesn’t have an assistant coach who seems capable of taking charge. RichRod’s staff is mostly stocked with those from lesser programs. He did not surround himself with the type of assistants, from Rich Ellerson and Duane Akina to Sonny Dykes, who once defined Arizona’s top seasons.

The league’s top coach, Stanford’s David Shaw, was part of Jim Harbaugh’s staff. Both of those men were hired away from the University of San Diego Toreros.

The players said Rich Rodriguez helped them become tougher and better, even if they didn’t always appreciate his methods.

The players said Rich Rodriguez helped them become tougher and better, even if they didn’t always appreciate his methods.

Hansen's video notebook: Should we be surprised about RichRod's fallout?

Greg Hansen and Star sports editor Ryan Finley take a deep dive into the news of Rich Rodriguez's firing at the UA, and try to make sense of w…

The issue is more complicated for the 16 players who signed in December, as their national letters of intent limit their options.

Applications will be received through Jan. 16, according to the posting, and search firm DHR International will aid in the hiring process.

Hansen's video notebook: After Rich Rodriguez, what should the Wildcats be searching for in a head coach?

🔊 The Wildcast, Episode 61: Who's the right person to replace Rich Rodriguez as Arizona’s head football coach?

The Wildcast, Episode 61: Who's the right person to replace Rich Rodriguez as Arizona’s head football coach?

BOULDER, Colorado -- No. 14 Arizona fell to Colorado 80-77, which was the first Pac-12 loss of the season for the Wildcats. Here's everything …

What does it take to get fired at University of Arizona?

What makes the head coaching position at Arizona so unique? There's many reasons why, but here's the top three.

Will Arizona's coaching search wrap soon or drag out? It depends on these four factors

When will Arizona hire RichRod's replacement? It depends on these four factors

Travelocity says it's "darn near in love" with Tucson

A Travelocity writer recently spent some time in Tucson and it's safe to say that he was thrilled with our "enchanting" city.

DEAR DR. ROACH: I am a 72-year-old man in excellent health and physical condition. I ride a bicycle 60 miles a week, and I generally feel good…

Rainfall totals won't be significant, but the mountains could receive a fair amount of snow.

Environmentalists say it's an attempt to sidestep the Endangered Species Act.

Biz tip of the week: Tips to achieve the highest level

Confidence, passion and a willingness to sacrifice are key.

Police: Arizona woman shot at husband while he sat on toilet

An Arizona woman is facing charges after police say she fired shots at her husband while he sat on the toilet to make him "listen."

The woman is facing felony charges of aggravated assault and criminal damage.

The Cats are scheduled to meet as a team for the first time since Rodriguez was fired last week.

In a tweet announcing his run for Senate, Arpaio says his single goal is to support the agenda and policies of President Donald Trump.

Ryan Finley, Greg Hansen and Michael Lev deliver an update on Arizona’s search for a new football coach, and explain why the Wildcats need the…

Who should the Arizona Wildcats hire? Depends on which camp you belong to

Here are the four main camps that have emerged in Arizona's coaching search, and which candidates could be leading the pack.

Arizona legislation would make such agreements unenforceable in cases where public dollars are used to pay victim.

The lawyer for the plaintiff in the Title IX suit extended an apology to former UA coach Rich Rodriguez, above, saying she spread what she now believes to be false information.

and Rodriguez’s wifecenters on former UA running back Orlando Bradford’s attacks against women. The plaintiff’s lawyer extended an apology to Rich Rodriguez, above, and his wife.

Rodriguez was the subject of two investigations in 2017: one for mistreating players, the other for running a hostile workplace.

The UA paid Rodriguez a $6.2 million buyout, which bothers at least one donor who believes his money was misspent.