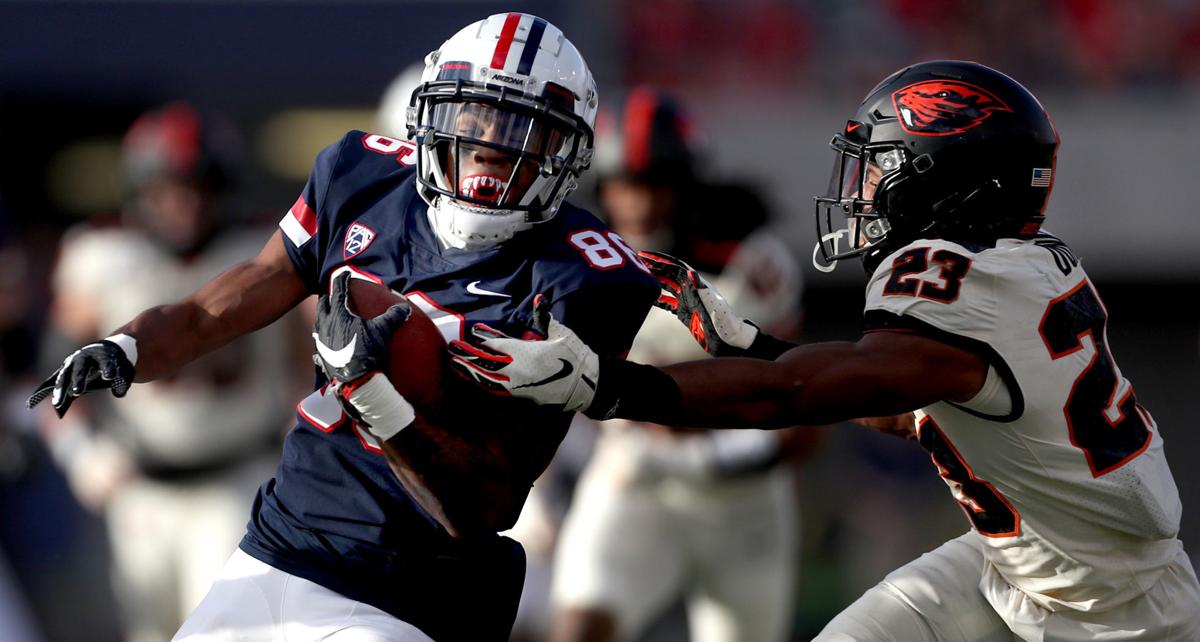 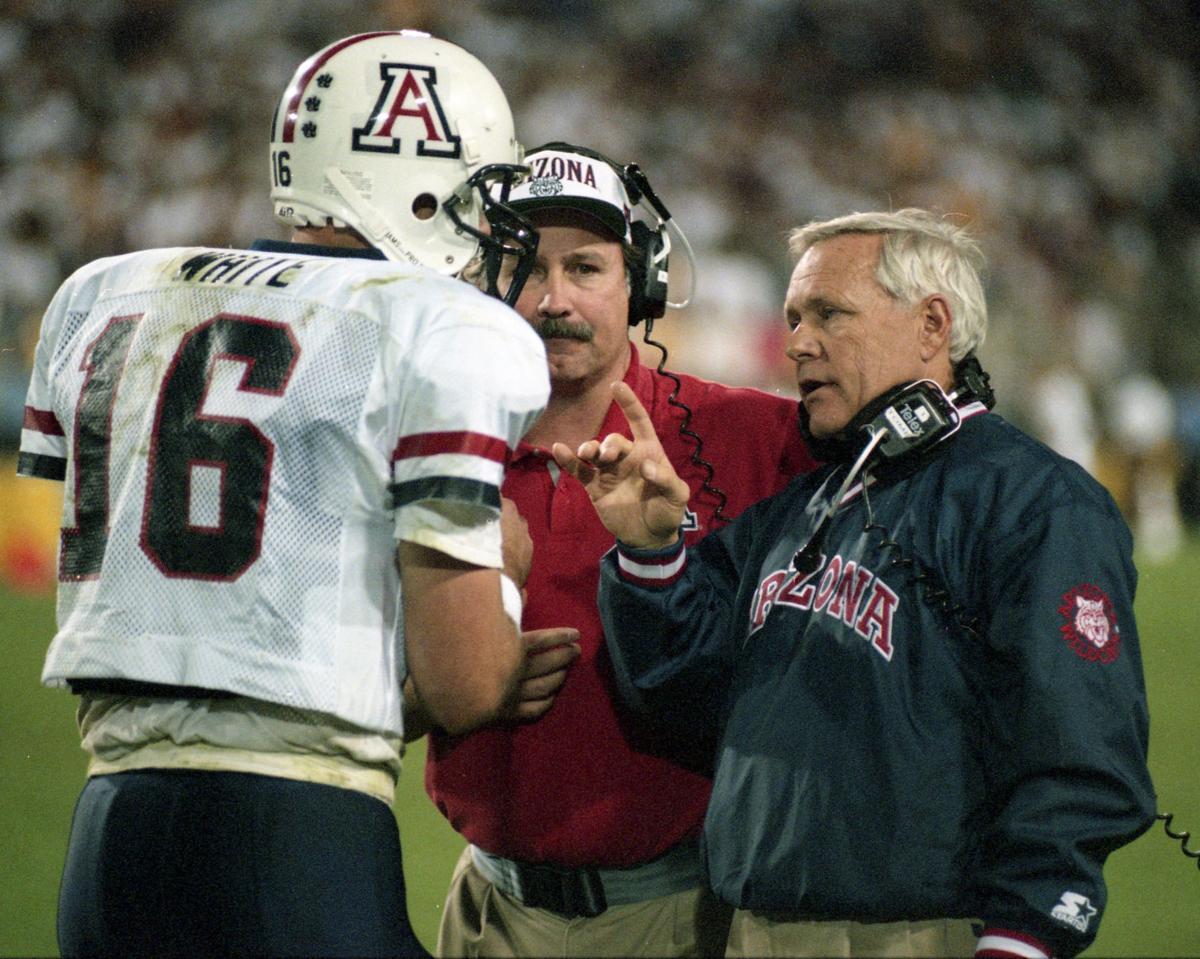 They allowed Tomey to leave with grace. No one in an official capacity ever said Tomey was fired. One of Livengood’s lieutenants told me that Tomey “resigned” because his tenure had become “the same old, same old.”

But no one held a celebration to honor the school’s 100th post-Tomey conference loss. Incredibly, Arizona has the worst record in the league since Tomey’s departure. In the 1990s, Arizona was No. 2 in the Pac-12 in winning percentage. Now: dead last.

That was unfathomable 19 years ago. From 1981-99, the Wildcats went 84-61-6 in league games. They were a tough out. They never had two consecutive losing seasons.

Here are the grim details, conference records of the original Pac-10 teams since Tomey resigned:

What the school has not yet realized and continues to ignore is that Tomey established the template for winning football at a non-traditional football school like Arizona.

He was a grinder. He was resourceful. He was a teacher.

He won hometown recruiting battles for 5-star type, don’t-let-them-leave-town prospects such as Michael Bates and Mike Ciasca. Now the top Tucson recruits are bound for Ohio State, Texas and UCLA.

When Arizona successfully recruited future All-Pac-10 linebacker Marcus Bell from tiny St. Johns in the White Mountains, Tomey drove five hours each way to watch him in a wrestling match. That trip convinced Bell to be a Wildcat.

Can you imagine any UA head coach since Tomey doing that?

Tomey got deeply involved in the community and did such things as spend his own money to travel to Final Fours, sit in the bleachers at UA baseball and softball games, spend seven years playing on a city league baseball team and organize scores of noon-time pickup basketball games at McKale Center.

He was visible. He was a Wildcat. When Oklahoma asked him to interview for the Sooners’ head coaching vacancy in 1995, he declined and recommended OU hire Larry Mac Duff, the UA’s defensive coordinator.

Much like Utah’s Kyle Whittingham — the new Dick Tomey of Pac-12 football — Tomey put a premium on defense, the kicking game, toughness, and recruiting the Polynesian community, elements missing for the last decade. He surrounded himself with high-level assistant coaches, unafraid that someone would step on his ego or get hired by the NFL or as head coaches — as were Johnnie Lynn, Clarence Brooks, Larry Mac Duff, Rich Ellerson, Dave Fagg, Pat Hill, Richard Smith and Jeff Woodruff.

He didn’t feel threatened when he hired former Arizona head coach Jim Young, former Army head coach Homer Smith and former Hawaii head coach Bob Wagner to help him win games. He allowed his assistant coaches to have an identity in the community, stage media interviews and connect to thousands who bought tickets at Arizona Stadium.

Today? None of the above.

Yet each time Arizona hired a new coach the last 19 years, it hired the anti-Tomey, distant and detached, the I’ve-got-a-system coaches who had been fired by flashy schools like Texas, Michigan and Texas A&M, men who had a pedigree from the Oklahoma Sooners and the NFL.

Since Tomey left town, Arizona has gone 63-100 in the Pac-12. That’s worse than remote Washington State and Oregon State, worse than financially-challenged Cal, worse than the stuck-in-mediocrity ASU Sun Devils.

On Saturday, Arizona it hit bottom with a 56-38 loss to a rebuilding Oregon State team.

This ship hasn’t sunk, but it’s taking on water, listing to port.

The man Arizona did not hire two years ago, Navy’s Ken Niumatalolo, is 7-1 and ranked No. 25 this week. He is the closest football coach on the planet to a Dick Tomey-style coach. He was, in fact, a Tomey assistant and former Tomey player at Hawaii. Niumatalolo is active in the community, resourceful, winning with toughness, overcoming the role of underdog.

In some respects, coaching at Navy isn’t much different than coaching at Arizona. You’re the Other Guy. Niumatalolo must play Notre Dame every season. He’s had to play twice at Ohio State, and against Penn State. Yet he has found a way to beat the Fighting Irish twice in the last decade.

When a memorial service for Tomey was held at McKale Center last spring, Niumatalolo flew from Maryland to Tucson to be one of the lead speakers. Instead of leaving immediately after the service, Niumatalolo spent several hours at the ranch of UA booster Pat Manley, where former Wildcat players and coaches gathered to honor Tomey.

At that reception, I asked Niumatalolo if he thought Arizona could be a consistent winner in college football.

The Nick Foles era in Jacksonville was put on ice after he exited the season opener against Kansas City with a broken left clavicle injury. Th…

Letter: Re: the Nov. 4. article “Greg Hansen: UA has drifted away from Dick Tomey's approach to game the past two decades, and the results show”

While listening to the post game radio talk shows back in the 1990s, the talk show hosts would frequently shield the heinous comments coming f…