The Arizona Wildcats held by far their longest, most difficult practice of training camp Saturday morning.

The temperature approached 100 degrees. An unrelenting sun beat down on the Arizona Stadium turf. The team ran 90 plays over two hours in full pads.

It was physically and mentally taxing, stressful in every way. In other words, it was exactly what UA coach Kevin Sumlin was seeking.

Sumlin wanted to put his players – especially the younger ones – through a test. The goal was to find out which ones their coaches and older teammates can trust the most.

Afterward, Sumlin again pushed the theme of consistency, which he’s been promoting throughout the offseason. He knows it’ll be difficult to attain with so many young players slated for key roles. But practices like Saturday’s should move the needle in the right direction.

“There was a stress level out there today, on purpose,” said Sumlin, whose team opens the season Aug. 24 at Hawaii. “The music was loud. It’s getting warm. Guys are getting a little bit tired, but having to think and still play … without coaches on the field.

“Some guys responded to that; some guys didn’t. That’s what today was about. But I thought, overall, it was positive.”

The Wildcats have veteran leaders in just about every position group.

But they’re also integrating underclassmen at multiple positions. Such is the nature of college football.

No position has undergone a bigger makeover than wide receiver, where only fifth-year senior Cedric Peterson has any substantial experience. With Pederson sitting out Saturday’s scrimmage because of a minor injury, the younger receivers got plenty of opportunities to show Sumlin what they could do.

“That’s part of growing up. That’s what we just talked about here as a team.”

Sumlin had a similar assessment of the freshmen and redshirt freshmen, who make up roughly half of the scholarship receiving corps.

“Some days these freshmen are lights out,” Sumlin said. “Then you come back the next day, and you’re like, ‘What’s going on?’ That’s part of the process.

“They’re young. But they’re talented. We’ve just gotta push them along, because they’re all going to help us.”

Arizona will have two new starters on the offensive line, neither of whom has started for the Wildcats. Junior-college transfer Josh Donovan has been running with the ones at left guard since spring. Redshirt sophomore Edgar Burrola has the lead for now at right tackle.

Right guard Cody Creason, a fifth-year senior, remembers what it was like when he was just breaking in. He’d lose a rep, and he’d get down on himself.

For those who are in a similar spot now, it’s a matter of learning how to manage those ups and downs.

“Especially on the offensive line, you’re going to have good plays and bad plays all the time,” Creason said. “If you get a holding penalty, or any penalty, or give up a sack, you’ve gotta just wipe that out of your head.”

Creason referenced a saying from offensive line coach Kyle DeVan that helps in that regard.

“Our coach always says, ‘The review mirror is smaller than the windshield. You can’t look behind you, you’ve gotta look ahead.’ ”

When Creason finished speaking, the opener was three weeks and seven hours away. Training camp resumes Monday. The Wildcats will conduct another scrimmage next Saturday. More answers will be revealed then.

“Everything works together,” Sumlin said. “Things for younger players were happening quick today. We’ll get them up to speed.”

Joiner didn’t play much during the two series open for media observation, but the Cienega High School product is expected to have a sizable role despite only recently shifting from quarterback to receiver.

“He’s coming along quickly,” Sumlin said. “He’s a bigger guy than you think he is. He’s explosive. He’s probably one of the top two, three athletes on this team.

“He’s caught balls in the middle. One thing you worry about guys that move out there (is) how will they deal with it in traffic. He’s done it. He’s a competitor. It means something to him. He’s bought in.”

Sumlin said Joiner appears to have a strong relationship with starting quarterback Khalil Tate after the two spent last season in the same meeting room.

Sumlin praised the performance of the defensive line, which featured Kylan Wilborn as the first-team defensive end.

After a breakout freshman campaign, Wilborn struggled as a sophomore and lost his starting job about midway through last season. He might be on the brink of bouncing back.

“He was a little nicked up last year,” Sumlin said. “He’s healthy now. He’s got what guys refer to as ‘twitch.’ He can get off the ball. He’s got great hands. He can rush the passer.”

Wilborn had 7ƒ sacks and four forced fumbles as a freshman. Last year he had two and one, respectively.

• J.J. Taylor started the scrimmage with a run of about 20 yards. Fellow tailback Bam Smith closed the open portion with a touchdown run of about 30 yards.

• A video released by the school showed interceptions by senior safety Chacho Ulloa and freshman cornerback Bobby Wolfe; a TD pass from Grant Gunnell to Zach Williams; and a TD run of about 70 yards by freshman tailback Michael Wiley.

• Cornerback McKenzie Barnes worked out with Pederson on the sideline during the scrimmage.

• Players who did not dress included offensive linemen Jon Jacobs and David Watson.

• Creason on practicing in the heat ahead of a 4:30 p.m. local kickoff in Honolulu (7:30 in Tucson): “It’s supposed to be hot. Last year, when we played Houston, we didn’t really adapt well. This was huge for us.”

• Creason on freshman offensive tackle Jordan Morgan (Marana High School): “The best thing about Jordan is, every day he’s asking, ‘What can I do to get better?’ I walk in the locker room sometimes, and I just see him studying his playbook when no one else is in there.”

Aztecs will begin playing home games on the West Campus starting in 2020.

The junior is in a better place physically and mentally after an up-and-down second season in which he lost his job.

Red zone is ‘big focus’ for Arizona Wildcats after too many stalled drives, close losses

The UA ranked 11th in the Pac-12 in TD percentage inside the 20-yard line last season and was particularly inept in a pair of one-point setbacks.

The UA is severely lacking in experience beyond vet Cedric Peterson, but some promising prospects already are emerging.

A look at each of the summer's tournaments, and how they played out. 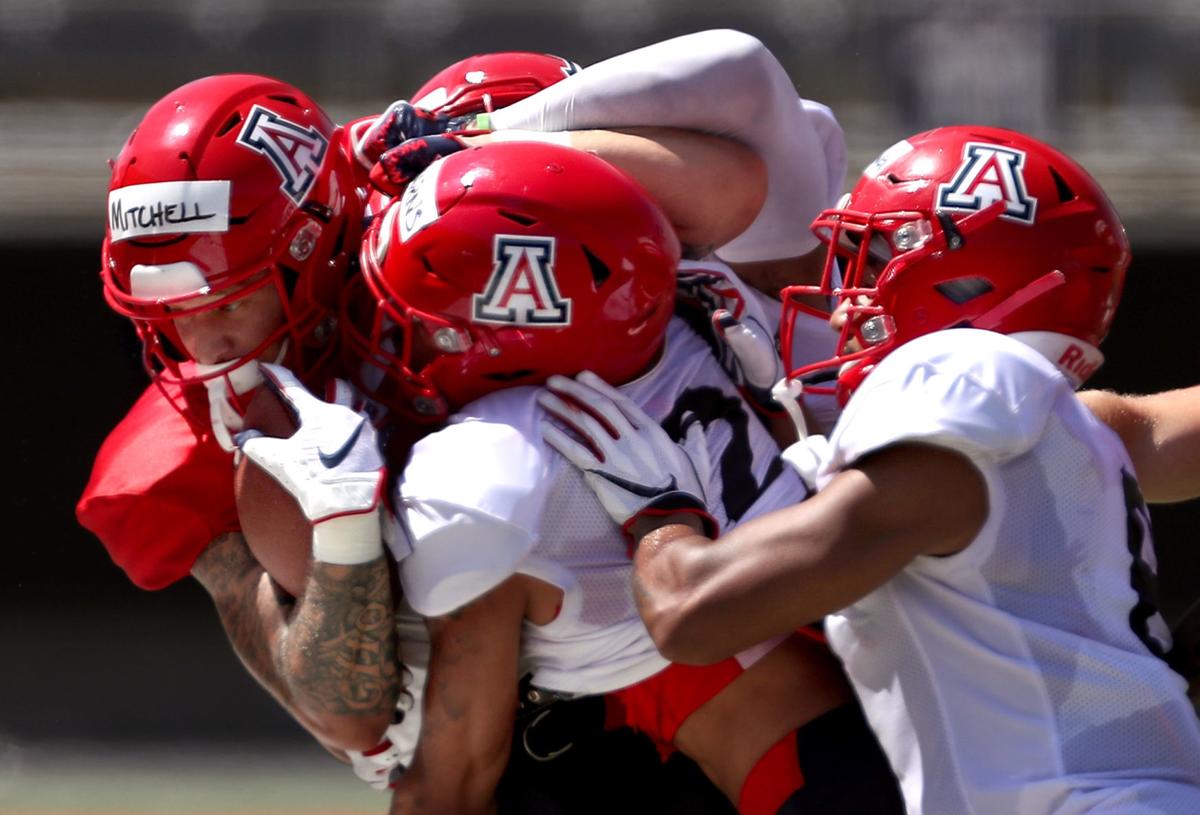 Receiver Jaden Mitchell, a true freshman, gets forced out of bounds by a trio of Wildcat defenders after his catch and run during Saturday’s scrimmage at Arizona Stadium. 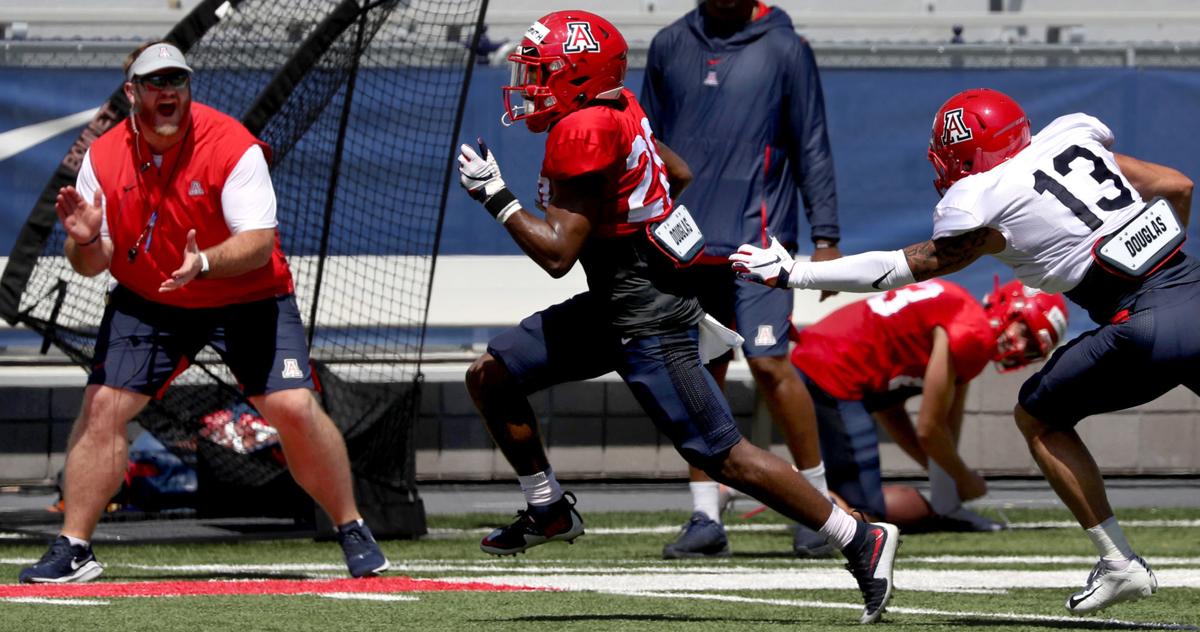