Read Today's E-Edition
Share This
In a fog: Wildcats walloped at Washington State; Territorial Cup up next
Share this
1 of 2 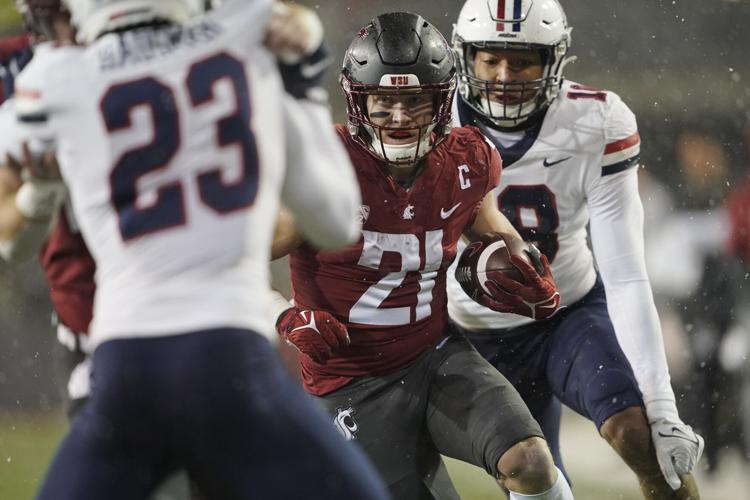 Washington State running back Max Borghi runs past Arizona cornerback Malik Hausman and linebacker Kenny Hebert during the first half of Friday’s game. 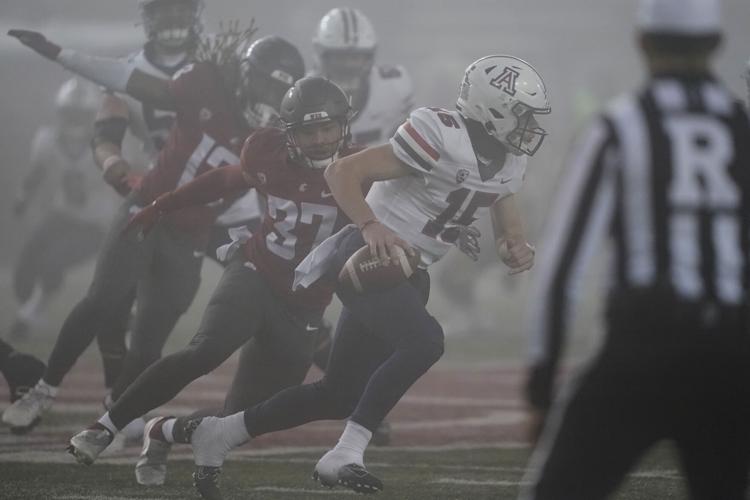 Arizona quarterback Will Plummer is pursued by Washington State linebacker Justus Rogers during the second half of Friday night's frosty, foggy loss to the Cougars in Pullman, Washington.

Snow flurries fell during the first quarter of Arizona’s game against Washington State on Friday night at Gesa Field. It’s believed to be the first time the Wildcats have played in snow since 1977.

Most of the rest of the game felt frustratingly familiar.

Mistakes and breakdowns led to one of Arizona’s least-inspired performances of the season. The Wildcats fell to the Cougars 44-18 in chilly Pullman, Washington.

From late in the first half on, the game was played in a dense fog. The Cats seemed to be in a mental fog for much of the night.

Arizona was flagged 10 times for 60 yards. Seven of those infractions occurred in the first half. The Wildcats had only five penalties last week vs. Utah.

"I don't think we played well (or) coached well," UA coach Jedd Fisch said. "Clearly, we didn't execute the way we should have. We expect a lot more from some of our younger players. We didn't put them in the best position."

The loss was Arizona’s sixth in a row in the game preceding the season-ending Territorial Cup. Friday was the fourth time the Wildcats played that game in Washington or Oregon. The average margin in those games: 28 points.

Fisch didn't think focus, or lack thereof, was an issue.

"I don't think that was a question," he said. "I thought our focus was great. I thought there was no issue about anything other than the fact that we are what we are currently with our depth.

"We can't, on third-and-11, give up a 50-yard pass. We can’t give up 230 yards rushing (223 officially). We have to put them in better position calling plays. We can’t have a punt blocked for a safety right up the A-gap.

The Wildcats struggled in several facets. Run defense was a particular problem, as the Cougars compiled a season-high total on the ground. Max Borghi, one of 14 Cougars honored on Senior Night, had 139 of those yards and two touchdowns.

Washington State turned a 21-7 halftime lead into a 37-7 advantage with a 16-0 burst in the third quarter. It started with Borghi’s second touchdown run and included the aforementioned safety.

To their credit, the Wildcats never stopped battling. They drove for a field goal to make it 37-10 with 35 seconds left in the third quarter. A 27-yard touchdown pass from Will Plummer to Michael Wiley – plus a 2-point conversion pass from Plummer to Dorian Singer – made it 37-18 with 12:16 remaining.

The Cougars delivered the dagger three series later. Jayden de Laura threw a 78-yard touchdown pass to Calvin Jackson Jr. to bump the lead to 44-18 with 8:37 to play.

De Laura completed 13 of 22 passes for 259 yards and four touchdowns. Plummer finished 24 of 42 for 222 yards with two TDs and one interception.

WSU, which operates a version of the run-and-shoot offense, did more running than shooting in the first quarter. The Cougars had 61 yards rushing and only 13 passing. Twenty-six of those rushing yards came on Borghi’s first touchdown run, which gave WSU a 7-0 lead with 7:11 left in the opening period.

WSU got the ball after a fourth-down failure. Arizona advanced to the WSU 45 on its opening drive. But Plummer’s sneak attempt on fourth-and-1 got stuffed for no gain.

The Cougars expanded their lead to 14-0 late in the second quarter. De Laura hooked up twice with Travell Harris for gains of 32 and 8 yards. The second pass went for a touchdown. Harris beat safety Jaydin Young in one-on-one coverage both times.

Arizona desperately needed a spark at that point, and Drake Anderson provided it. His 71-yard run advanced the Wildcats into the red zone.

Arizona then faced another fourth-down situation – fourth-and-2 at the WSU 11. Fisch called a play-action pass. After finding no one open to the right, Plummer came back to his left. Plummer threw a jump ball to Boobie Curry, who defeated Chau Smith-Wade for the score to make it 14-7.

It didn’t take long for the Cougars to re-establish a 14-point advantage. They needed only three plays to go 75 yards. De Laura connected with Jackson for a 43-yard TD. Young again was victimized on the play.

After the game, Fisch was ready to turn his attention to his first Territorial Cup.

"That's where our focus will be starting now," he said.

• Who: Arizona at Arizona State

Here's a look at the Tucson products and former Arizona Wildcats on NFL rosters.

No. 2-seeded Lancers roll 63-24 to set up a home game against No. 7 Scottsdale Notre Dame next wek.

Desert View will now travel to face another Goodyear opponent, Desert Edge, in next Friday's quarterfinals.

The No. 4-seeded Aztec women will take on No. 1 Heartland (Illinois) CC at noon Saturday in Wichita, Kansas in the Division II championship. The Pima men won Friday night in the national semifinals.

The Class 4A and 5A state tournaments began Friday night, with Tucson teams going 4-1 on the evening.

By the numbers: How the Arizona Wildcats were routed by Washington State in foggy Pullman

These numbers explain the Arizona Wildcats' latest defeat to Washington State in Pullman.

Frames from the Arizona Wildcats' chilly contest in Pullman Friday night against the Washington State Cougars.

The Arizona Wildcats look to win their second game of the season when they face Washington State Friday night in Pullman.

Notes, quotes and stats from the Arizona Wildcats’ 44-18 loss to Washington State

The Cats' setback against the Cougars revisited: Third-and-longs, familiar issues, death by draw play and more.

All week, Star columnist Greg Hansen is counting down the five best Territorial Cup games of all time. Up first: No. 5.

Arizona State is favored by three scores over Arizona, which could have one of its key offensive weapons back.

All week, Star columnist Greg Hansen is counting down the five best Territorial Cup games of all time. Up next: No. 3.

Don Brown will coach the Arizona defense one last time when the Cats visit ASU on Saturday.

All week, Star columnist Greg Hansen has been counting down the five best Territorial Cup games of all time. Time to unveil No. 1.

Washington State running back Max Borghi runs past Arizona cornerback Malik Hausman and linebacker Kenny Hebert during the first half of Friday’s game. 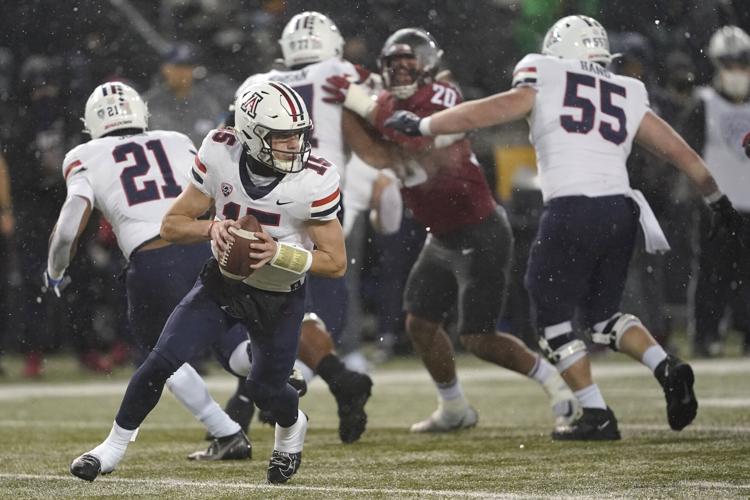 Arizona quarterback Will Plummer drops to pass against Washington State during the first half of Friday’s game. 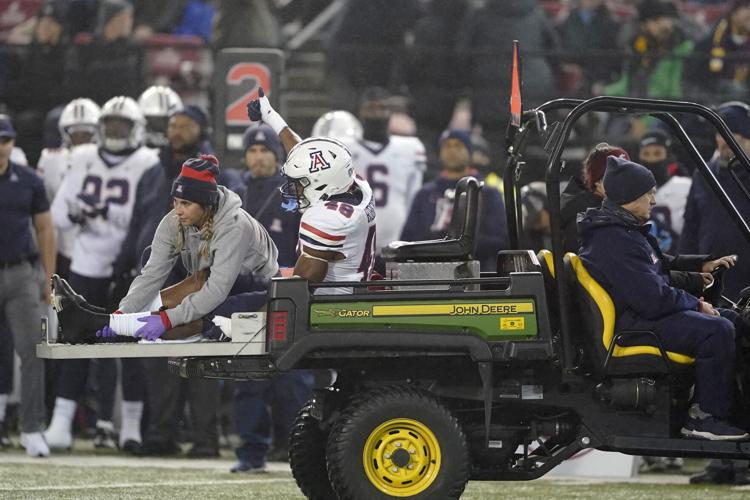 Arizona linebacker Jerry Roberts is taken off the field with a leg injury during the first half of Friday’s game.

Arizona quarterback Will Plummer is pursued by Washington State linebacker Justus Rogers during the second half of Friday night's frosty, foggy loss to the Cougars in Pullman, Washington.