No position group on the 2019 Arizona football team will face more early-season scrutiny than the wide receivers. When you lose four of your top five pass catchers — and most of the replacements have minimal experience — that’s what happens.

Don’t expect the Wildcats’ wideouts to shrink from the challenge.

“There’s gonna be a lot of people throwing shots at us, trying to see who we are,” inside receivers coach Theron Aych said this week. “We’ve gotta be nasty. We’ve gotta be physical.”

There’s no telling whether this year’s receiver unit will be better than last year’s or the one before it. Initially, it probably won’t be.

But there’s no disputing that the composition of the receiving corps has changed, in more ways than one.

Arizona’s wide receivers, across the board, are larger. Not that bigger is always better — the Wildcats’ best all-around player might be tailback J.J. Taylor, who’s 5 feet 6 inches and 184 pounds — but Kevin Sumlin prefers that his wideouts have length. It gives them a better chance to win one-on-one battles, whether they’re blocking or fighting for the ball.

“Obviously, speed is important,” Aych said. “But since Coach Sumlin’s been here, we’re trying to get bigger. We’ve got to be physically able to match up with the people that we play.”

Even after the departure of 6-5 Shawn Poindexter, Arizona’s receiving corps has grown in stature. Eight of the 11 scholarship wide receivers on the current roster are listed at 6 feet or taller. Last year it was 5 of 11. The Wildcats never had more than three in any of the previous three seasons.

The average weight, meanwhile, has steadily increased, going from 184 pounds in 2015 to 196 this year.

It’s not all about size, though. Outside receivers coach Taylor Mazzone urges his charges to be the “tone-setters” for the team. What does that mean exactly? Mazzone’s reply to a question on a slightly different topic provided the answer.

Mazzone was asked what he looks for when recruiting players for his position.

“Toughness through and through,” Mazzone said. “I need a guy that understands, mentally and physically, being tough.

Redshirt senior Cedric Peterson — who was listed at 5-11, 193 last year and is 6-1, 197 this year — takes as much pride in blocking as he does receiving. The same goes for 6-3, 205-pound redshirt sophomore Drew Dixon, whose claim to fame to date at Arizona is driving an Oregon State defender through the back of the end zone last season.

Mazzone’s mantra is simple and succinct, Dixon said: “Be physical. Do your job.”

It applies to the inside receivers too.

Jamarye Joiner is expected to bring a physical presence to the slot. Safety Tristan Cooper, who often guards Joiner in practice, recently expressed surprise at how physical the ex-quarterback is, remarking that he’s “strong as heck.” Joiner is listed at 6-1, 210.

“He’s a big, strong guy,” Mazzone said. “He can go in there and block the big ‘Sam’ linebacker.

“He might do a little talking on the field, which is great. It gets the intensity going, the competition going. Whenever you get receivers out there buying in, and want to throw their hands on some D-linemen or linebackers, it’s fun to watch.”

Quarterback Khalil Tate has noticed. He believes Joiner will present a mismatch for whoever tries to cover him.

How quickly Joiner learns to use his size to his advantage remains to be seen. All the reports from training camp have been positive. The Aug. 24 opener at Hawaii is less than two weeks away.

It took Dixon, another converted quarterback, a bit of time to figure that out. Mazzone believes Dixon gets it now. He’s slated for a much larger role, along with 6-4, 195-pound Tre Adams, opposite Peterson.

Berryhill primarily has been working on the outside. It seems like an odd fit for a 5-10, 177-pounder. But Berryhill has something else Mazzone and Aych value: a big heart.

“He’s competitive … fearless,” Mazzone said. “No matter what the situation in the game is, he’s right there, dying to get in. He’s a guy that you almost have to pull back a little bit.”

Pro Football Focus this week ranked all 130 starters in FBS. The data-driven website placed Tate at No. 10, one spot ahead of Oklahoma’s Jalen Hurts and one spot behind Georgia’s Jake Fromm.

Tate isn’t as accomplished as Hurts or Fromm, who squared off for the national championship at the end of the 2017 season. But Tate’s achievements that year – including 1,411 rushing yards – still resonate.

Wrote PFF’s Cam Mellor: “As fun a prospect that we’ve seen over the past two years, if he can return to the form that saw him as a Heisman candidate in 2017 when he utilized his legs more, the 2019 season could be much different for Wildcat faithful.”

Meanwhile, the consensus from camp is that the gap has shrunk between Tate and his backups — with freshman Grant Gunnell leading that charge.

Arizona has yet to release an official depth chart for the opener, but it wouldn’t be surprising if Gunnell were at least even with junior Rhett Rodriguez behind Tate. The more competition in the quarterbacks’ room, coaches and players said, the better.

“It’s been good for our whole group,” said Noel Mazzone, the Wildcats’ offensive coordinator and quarterbacks coach. “They’re all very competitive kids. They’re human, right? They watch each other. And when one guy has a good drive or a good series, there’s (competitiveness) in them to go out and have a good drive or good series.”

With all due respect to Rodriguez, Tate didn’t have legitimate competition for the job last year. He pushed himself this offseason to improve his leadership skills and study habits. The arrival of the record-setting Gunnell in January undoubtedly played a part in that.

“He’s pushed me a lot,” Tate said. “We have a lot of good quarterbacks in our room. It’s a very competitive room, and all of them are pushing me each and every day to get better.

The average height (in inches) and weight of Arizona’s scholarship receivers over the past five seasons, plus the number of wideouts listed at 6 feet or taller:

The senior showed signs during training camp that he’s ready to run and recapture the form that made him a deadly dual threat two year ago.

An excessive heat warning for Tucson begins at 10 a.m. as temperatures approach the daily record of 107 degrees set in 2015, the National Weat…

DL coach Iona Uiagalelei says ‘there's no falloff’ between the first unit and the second, which is loaded with starting experience.

Greg Hansen: Wildcats will score plenty in 2019; will patchwork defense be enough?

The Star's columnist believes Arizona will torch teams offensively. As usual, however, the Wildcats' success may come down to defense.

The Arizona Wildcats released their first official depth chart of the 2019 season today. Below is a look at the offense heading into Saturday'…

Notes, quotes and stats from the Arizona Wildcats’ 45-38 loss to Hawaii

Pertinent factoids, words and numbers from the Cats' setback against the Rainbow Warriors. 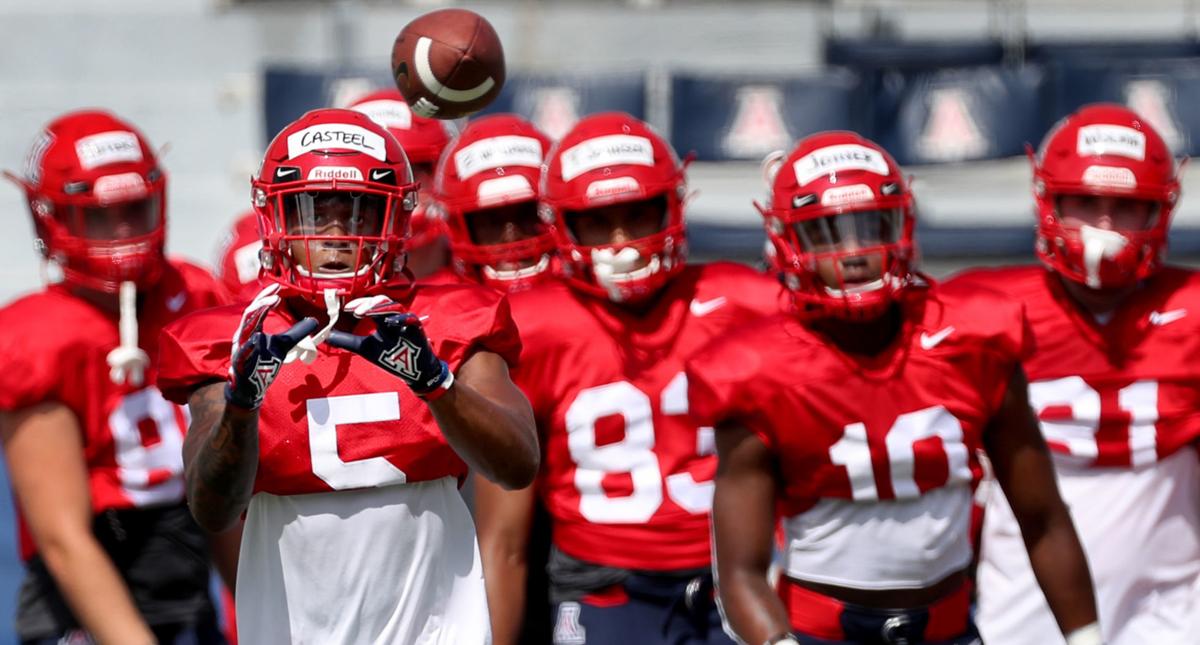 UA wide receiver Brian Casteel says the Wildcats have been wondering “who are we?” all offseason. “We get to show who we are this Saturday,” he said. 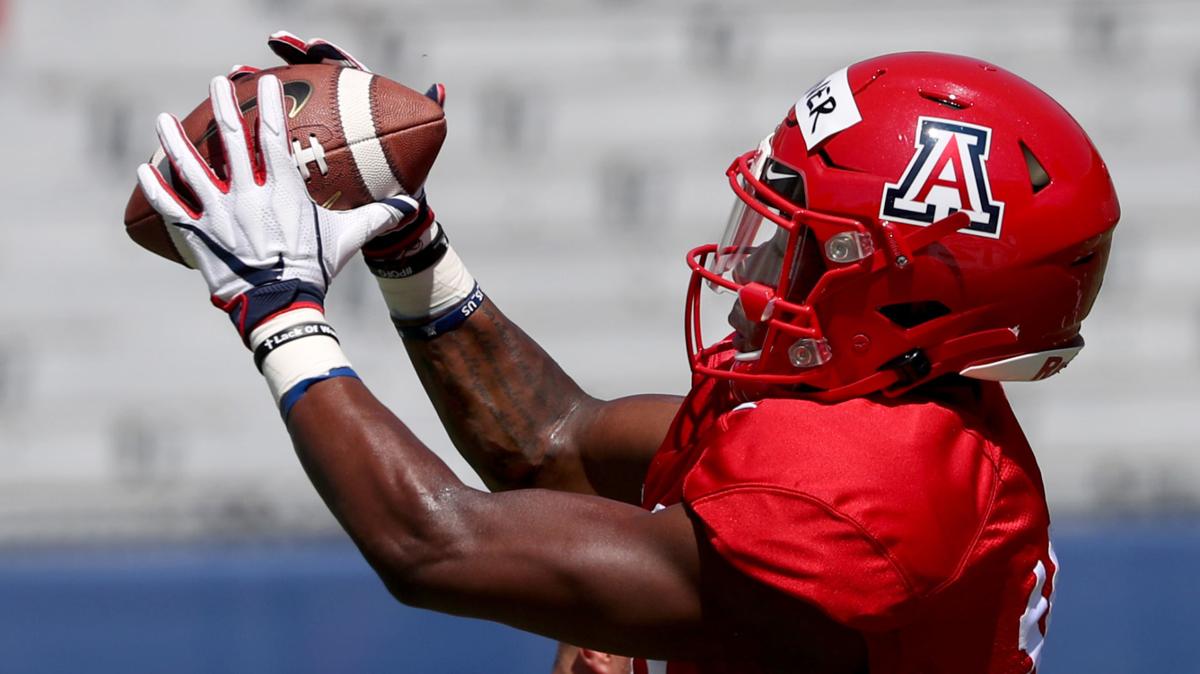 Jamarye Joiner is the latest in a line of larger, more physical wide receivers under coach Kevin Sumlin. The converted quarterback is “strong as heck,” one teammate says.