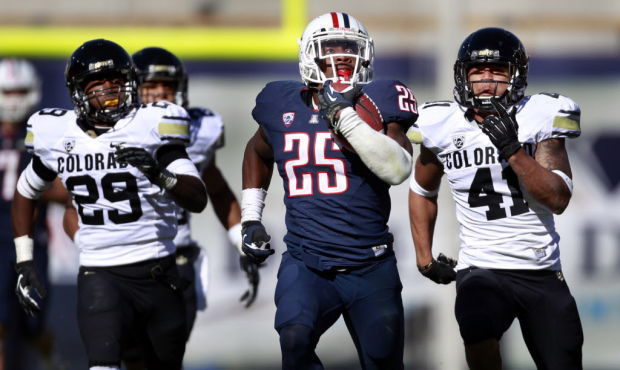 Ka’Deem Carey racked up 366 rushing yards, the best single-game performance in Pac-12 history, when the Wildcats hosted Colorado in 2012. 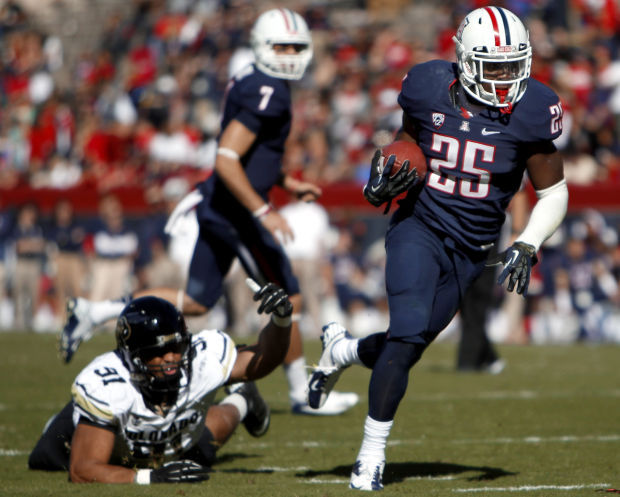 The UA’s Ka’Deem Carey set the Pac-12’s single-game rushing record when he gained 366 yards against Colorado in a 56-31 win at Arizona Stadium in 2012. The mark still stands.

Ka’Deem Carey spent Wednesday afternoon in Chicago, cleaning out his house and getting ready to move back to Tucson. Carey plans to spend the next few months rehabbing a wrist injury and waiting for his next NFL opportunity.

Carey is confident another team will give him a shot. He’s excited to explore his options and to find, as he put it, a bigger fish in the ocean. A new place to call home.

Until then, Carey will be back home. He will, as usual, keep an eye on his alma mater when it takes the field Saturday against Colorado in Boulder.

The Buffaloes are a team Carey knows, and remembers, well.

Five years ago, he racked up 366 rushing yards, the best single-game performance in Pac-12 history, as the Wildcats beat CU 56-31 at Arizona Stadium. He scored five touchdowns and added 34 receiving yards.

Even now, Carey considers it the most fun he had as a college player.

“I was ready to rumble. Everything felt right,” Carey said on Wednesday. “It was a great day.”

Carey’s Wildcats were in a similar position as this year’s team. That Arizona squad was coming off arguably the worst loss of the Rich Rodriguez era, a 66-10 laugher at UCLA.

“I just didn’t want to mess it up,” said Denker, who’s now back with the Wildcats as a graduate assistant. “That was one of the first things I thought. I think he (Carey) probably knew going into it that we were probably going to ask a little bit more of him.”

Carey only carried the ball 16 times against UCLA, finishing with 54 yards — his worst performance in 25 games with Rodriguez.

Carey spent extra time in the film room and weight room after that, trying to fix whatever ailed him against the Bruins.

“The UCLA game before that, I probably played a half since we were getting shut out so bad. I literally had fresh legs and was just excited. I was ready to carry that ball,” Carey said. “When I got on the field I was used to UCLA with a big defense and no holes, then going to gigantic holes (against Colorado). I didn’t know what to do with that — I just had a ball.”

Well, not right away. Denker and Carey botched a hand-off on the game’s first play, and Colorado recovered near the end zone. The Buffs promptly scored.

On the next drive, Carey carried the ball five times for 26 yards and a touchdown.

• Two carries, 15 yards and a touchdown, plus two catches for 34 yards;

• One carry for 30 yards and a touchdown;

• Five carries for 40 yards and a touchdown;

• Two carries for 67 yards and a touchdown

“Every drive it felt like he had a potential chance to take it to the house,” Denker said. “I don’t remember thinking that he had a bunch of yards; I just knew that he was unstoppable that game and I had the best seat in the house.”

The rushing total could have been even higher — on multiple occasions, including a 71-yard burst, Carey ran out of steam and was chased down before reaching the end zone.

He was also taken out before the end of the game.

Last week, Stanford’s Bryce Love appeared on his way to challenging Carey’s Pac-12 record in a game against Arizona State, but he only finished with 301 yards on 25 carries.

Following that record-setting performance, Carey never looked back. In his last 15 games at Arizona, he averaged 162.2 rushing yards per game and never rushed for less than 128. He finished his collegiate career as Arizona’s all-time leading rusher and an All-American. He even received Heisman Trophy votes.

“I did everything I wanted to do” at Arizona, Carey said. “The only thing I didn’t accomplish was going to a Rose Bowl … or the national championship.”

The Bears made Carey their fourth-round pick in the 2013 draft. He moved to Chicago and began life as a young pro. He married and matured.

“I turned into a man,” Carey said. “That’s what really happened. I went down to Chicago as a young man and didn’t know what the world was about.”

“He,” Rodriguez said, “was just unbelievable on that day.”

Here's a quick look at the top 10 receiving leaders in Southern Arizona through Friday, Sept. 29, and how they performed in their most recent game.

Welcome to another week of high school football in Southern Arizona. The Star will be coming at you live from the game of the week: Sabino (5-…

Three things to keep an eye on as the Cats face the Buffaloes in Boulder.

It's game day! Welcome to the Star's live fan chat, tonight covering the Arizona Wildcats in Boulder, Colorado, against the Buffaloes. Both te…

Ka’Deem Carey racked up 366 rushing yards, the best single-game performance in Pac-12 history, when the Wildcats hosted Colorado in 2012.

The UA’s Ka’Deem Carey set the Pac-12’s single-game rushing record when he gained 366 yards against Colorado in a 56-31 win at Arizona Stadium in 2012. The mark still stands.