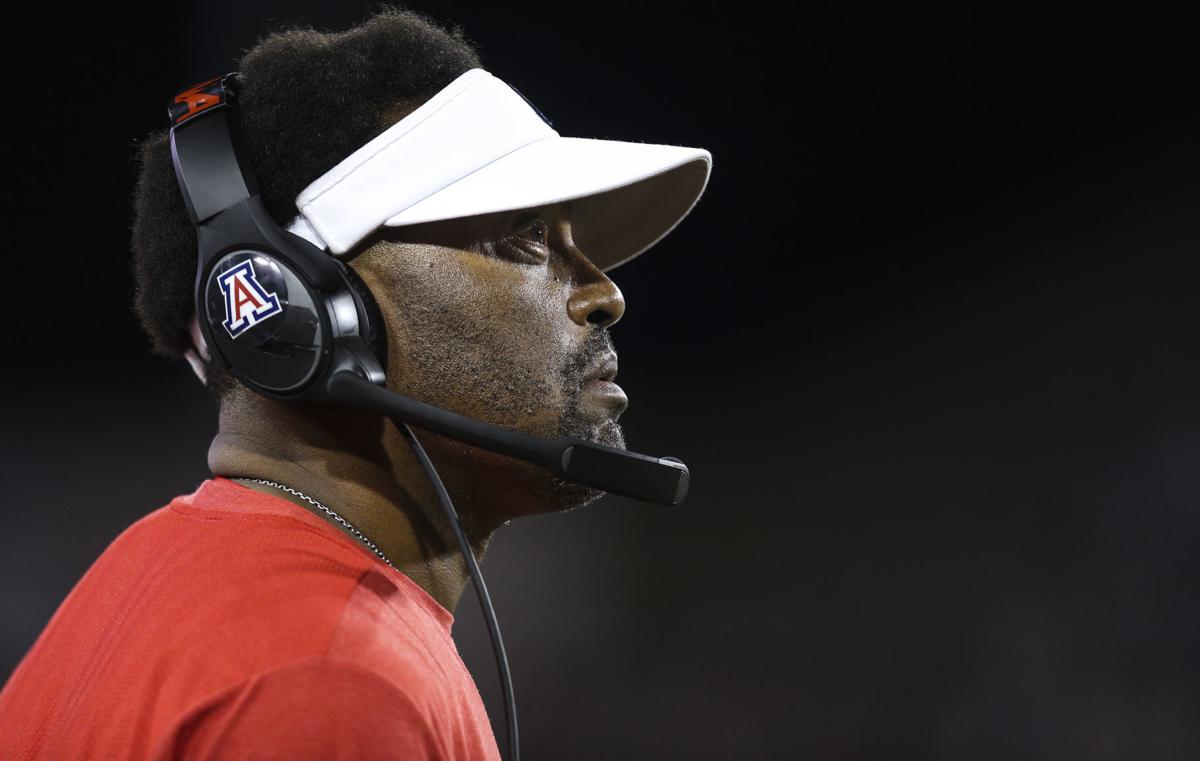 Coach Kevin Sumlin and his Wildcats face a Texas Tech team that is 2-0 after home wins over Montana State and UTEP. The Red Raiders are Arizona’s first nonconference Power Five opponent since 2012. 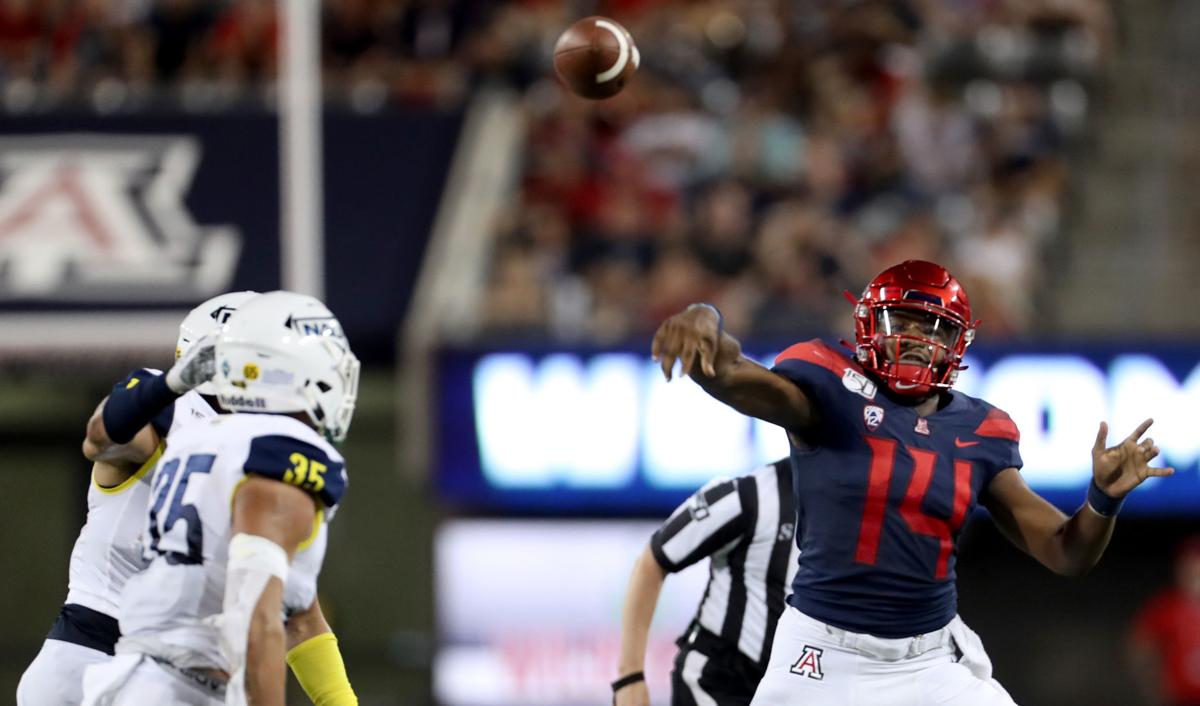 Quarterback Khalil Tate and the Wildcats will face a tougher opponent in Texas Tech on Saturday after scoring a school-record 51 points in the first half against Northern Arizona last week.

Every coaching regime in its relative infancy needs a signature victory. It needs a performance that instills confidence in the players and restores the faith of the fans.

Saturday night’s game against Texas Tech could be that moment for Kevin Sumlin and the Arizona Wildcats.

“I think this game is really going to show us who we really are,” UA receiver Drew Dixon said. “We know what team we want to be. Obviously, we’re going to face adversity sometime in this game at some point, because it’s going to be a close game. But it’ll help us find our identity for sure.”

The Red Raiders are the Cats’ first nonconference Power Five opponent since 2012. Texas Tech probably is the best team Arizona has played so far.

And let’s face it: Sumlin and the Wildcats need this game more than Matt Wells and the Red Raiders do.

Arizona is in Year 2 under Sumlin. Texas Tech is in Game 3 under Wells.

The Red Raiders are 2-0. They had only two winning seasons in six years under Kliff Kingsbury, the last coming in 2015.

Although Texas Tech went 8-5 in Kingsbury’s first year, 2013, one could argue his signature win came in the ’15 regular-season finale. Texas Tech defeated Texas, in Austin, 48-45.

But the Red Raiders couldn’t follow through. They finished under .500 each of the next three seasons, and Kingsbury was fired last November.

Arizona pulled off what felt like a program-altering moment about a month earlier. The UA crushed No. 19 Oregon 44-15. The following week, Arizona beat Colorado. The Wildcats were back to .500 and back in the postseason bowl picture. The Sumlin era seemed to be heading in the right direction.

Then came a blowout loss at Washington State and a blown fourth-quarter lead against Arizona State. Arizona opened 2019 with a disappointing defeat at Hawaii and a win over NAU in which it got outscored 28-14 in the second half.

Which brings us to Saturday night.

“This is a critical week for the program,” Pac-12 Networks analyst Yogi Roth said. “It’s not a make-or-break game. But it’s gotta be a really competitive game. It can’t be Houston or BYU.”

The Houston loss last year was one of three in which Arizona failed to compete from the start. The BYU loss came by only five points, but it felt worse because it was Sumlin’s debut and it fell well short of expectations.

Contrast the start of Sumlin’s tenure here last year with that of Mel Tucker at Colorado this year. CU beat in-state rival Colorado State in its opener, then rallied to edge Big Eight rival Nebraska in an overtime thriller last week that ended with the fans storming the field.

Roth wouldn’t put Texas Tech on Nebraska’s level, but beating the Red Raiders could have a similar impact.

“You get a moment where the team’s like, ‘Yeah, this is great. This is working,’ ” Roth said. “The opponent isn’t as big time. The rivalry isn’t as close. But the premise still rings true.”

Both teams see this game as an opportunity to find out the truth about themselves. Although each has played twice, many questions linger.

For instance, it’s fair to wonder if their records would be reversed if each had played the other’s schedule. Texas Tech opened with a pair of home games: against Montana State, an FCS school, and UTEP, a consensus bottom-10 program in FBS. Would Arizona be 2-0 if it had played those teams in Tucson?

“One hundred percent,” Roth said. “It’s safe to say that if Oregon State had the same schedule as Texas Tech, they’d be undefeated.”

Wells used the phrase “biggest challenge” three times in describing the Arizona game during his Monday news conference this week. He called it Texas Tech’s “biggest test” twice within the same paragraph.

“We’ll have to play our best game of the year so far to win Saturday night,” Wells said.

Arizona showed what it was capable of in the first half vs. NAU. The Wildcats scored a school-record 51 points, and all seven of their first-half possessions ended in touchdowns. Even the much-maligned defense limited senior quarterback Case Cookus to 15-of-30 passing and held the Lumberjacks to 13 points.

Arizona wasn’t as focused in the second half, which led to sloppy, undisciplined play. Regardless of whether those final 30 minutes reflected the reality of the 2019 Wildcats, Sumlin was justified in being perturbed afterward. At the very least, that half revealed the team’s immaturity.

In a sense, it was the perfect outcome: The Cats won easily but gave Sumlin plenty of reasons to be hard on them.

Senior safety Tristan Cooper viewed the NAU game as the next step in the natural progression of the season.

“We got our warmup game,” Cooper said, referring to Hawaii. “We got our emotions out (NAU). Now it’s time for business against Texas Tech.”

Getting over the hump

Arizona might not take the next step as a program until it approaches every half of every game with the same sense of urgency. Some Wildcats wouldn’t go so far as to say the Texas Tech game was bigger than any other; more than one said Arizona needs to attack every game as if it’s the biggest of the season, starting Saturday.

It’s one thing to say it; it’s another to do it. If they can pull off what would be considered a mild upset against the Red Raiders, the Wildcats would be in good shape entering Pac-12 play. They have a bye before hosting UCLA, which is 0-2 (losses to Cincinnati and San Diego State) and will be coming off games against two ranked opponents: Oklahoma and Washington State.

“The next two games are both winnable games,” Roth said. “At some point, you want everybody to feel like we got over a little bit of a hump.

“With these second-year coaches, it’s about building their foundation. It takes time. But as long as guys aren’t pulling in opposite directions or checking out — which they aren’t, because they’re playing hard — then you’re good.”

Mr. Football on a UA-TTU shootout, what constitutes a 15-yard penalty and why Cats will win for 'Comet'

Star columnist Greg Hansen on what to expect Saturday night at Arizona Stadium.

Areas to monitor when the Wildcats host the Red Raiders include third-down defense, third-down completion percentage and turnover margin.

‘I just know that we got Coach Yates’ back, and he’s got ours,’ veteran cornerback Lorenzo Burns says.

What to watch for when the Arizona Wildcats host Texas Tech

Three things to keep an eye on when the Cats face the Red Raiders at Arizona Stadium.

Week 3 of the high school football season is in the books! Check out the scores across Southern Arizona:

Observations from warmups before the Arizona Wildcats’ game against Texas Tech on Saturday night at Arizona Stadium (7:30 p.m., ESPN):

The UA moved some pieces around on defense against Texas Tech, and the effect was palpable.

Coach Kevin Sumlin and his Wildcats face a Texas Tech team that is 2-0 after home wins over Montana State and UTEP. The Red Raiders are Arizona’s first nonconference Power Five opponent since 2012.

Quarterback Khalil Tate and the Wildcats will face a tougher opponent in Texas Tech on Saturday after scoring a school-record 51 points in the first half against Northern Arizona last week.