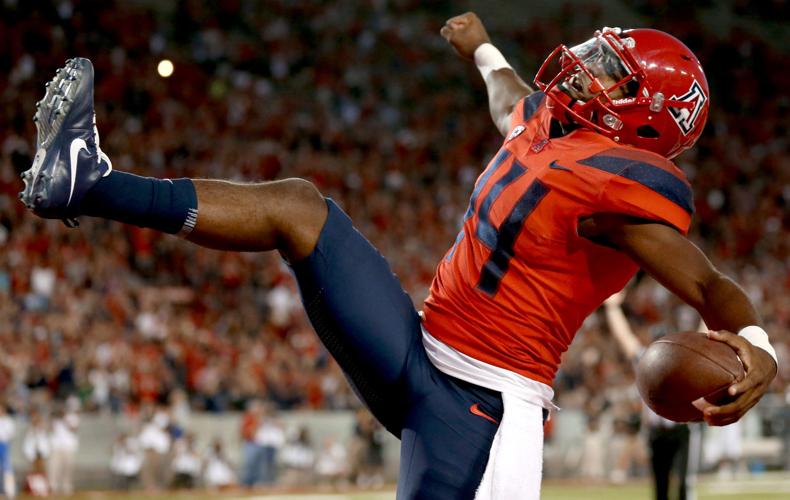 Arizona coach Rich Rodriguez says quarterback Khalil Tate doesn’t need to be Superman for the Wildcats to win in Tempe this weekend. “Just take what they give us,” Rodriguez said. Oregon held Tate to just 32 rushing yards last week. 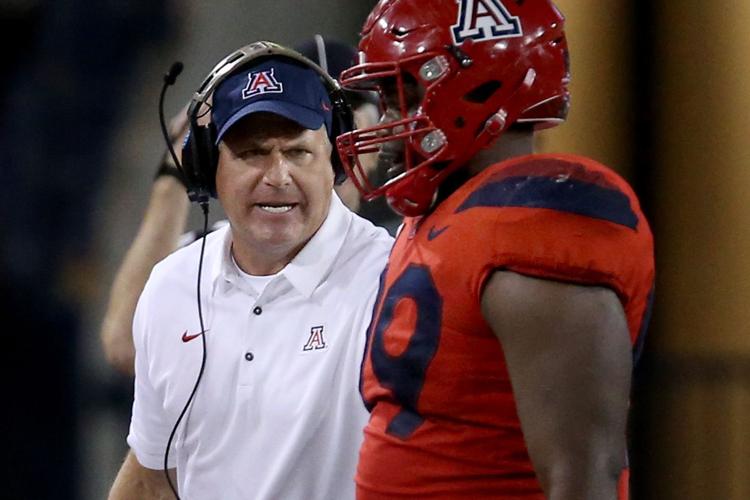 Rodriguez was known to have expletive-filled tirades at team members. “The next coach should put more emphasis on hugging ’em and loving ’em,” former UA coach Dick Tomey says. 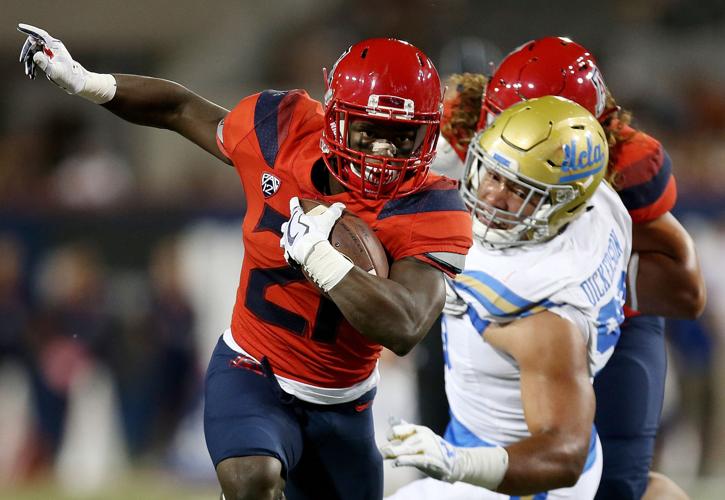 Arizona running back J.J. Taylor breaks free during the first quarter in the Wildcats win over UCLA at Arizona Stadium. Taylor finished with 64 yards on 16 carries.. 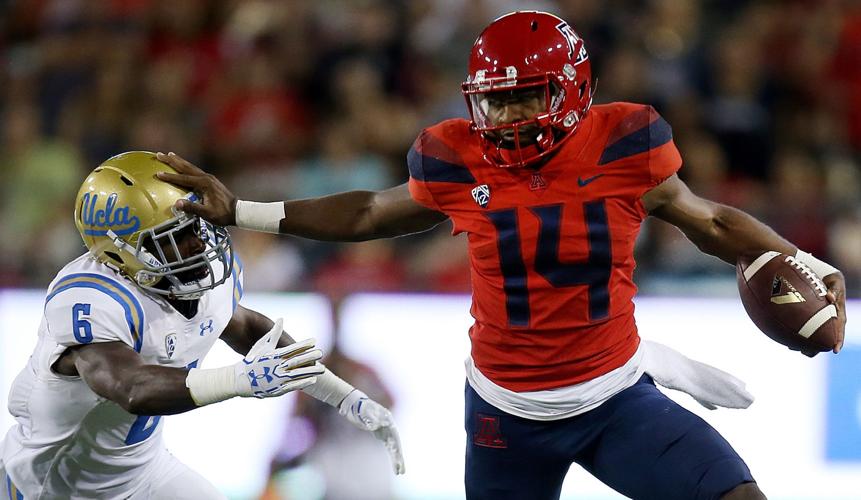 UA’s Khalil Tate is one of two quarterbacks to win the Pac-12 Offensive Player of the Week three times in succession. The other: Rodney Peete.

The Arizona Wildcats are no longer UCLA’s patsies. They just might be players in the Pac-12 South.

Behind the magic of Khalil Tate and a defense that made just enough plays, the Cats ended their losing streak against the Bruins and established themselves as contenders in a conference suddenly lacking a clear front-runner.

Arizona defeated UCLA 47-30 in front of an announced crowd of 48,380 Saturday night at Arizona Stadium. The Wildcats hadn’t defeated the Bruins since 2011. It was their first victory against them in six tries under Rich Rodriguez.

Rodriguez described it as a “point of contention” among the coaches and players to beat UCLA – or, at the very least, play well against the Bruins. Arizona achieved both in its most complete performance of the season against a quality opponent.”

“It wasn’t a monkey,” Rodriguez said of the UCLA losing streak. “It was a gorilla.”

Tate again was a beast.

He didn’t match his record-setting performance from last week at Colorado – that would have been close to impossible – but he was pretty darned good. The sophomore quarterback, making his first start of the season and second of his career, rushed for 230 yards and two touchdowns. He also completed 9 of 13 passes for 148 yards and a score.

“He can play even better,” Rodriguez said. “But man, when we needed a big play, he was delivering.”

Tate got more than enough support from his teammates. Tailback Nick Wilson had his highest rushing output since the 2016 opener against BYU, finishing with 135 yards and two touchdowns. The defense took the ball away four times and sacked Rosen five times, including four by freshman Kylan Wilborn.

“It was the defense as a whole,” said cornerback Jace Whittaker, who had two interceptions, including one he returned for a touchdown. “Everybody was playing aggressive. Nobody was playing timid tonight.”

With Rosen at quarterback, the Wildcats knew the Bruins were capable of coming back. The strong-armed junior, projected to be a first-round NFL draft pick, led UCLA back from a 44-10 third-quarter deficit against Texas A&M in Week 1.

So the Cats kept coming after Rosen. UCLA’s penultimate possession ended with a Wilborn sack for a loss of 11 yards. Wilborn got him again on the first play of the next Bruins drive, becoming the first Wildcat to record four sacks in a game since Joe Salave’a did it against Arizona State in 1997.

“We just knew we couldn’t take the gas off,” said Wilborn, who also forced a fumble in the first quarter. “That was the most important thing. We saw what he did against A&M.”

There would be no such rallies Saturday night. Down by 17, UCLA advanced to the Arizona 16-yard line with just enough time left to make the Wildcats nervous. But on second-and-10, Dane Cruickshank intercepted Rosen.

The Wildcats took over with 5:28 remaining. Just like last week against Colorado, Arizona ran off more than five minutes of clock time and never gave the ball back.

“We didn’t get as much pressure as we needed to, but we made some really good plays on the ball,” Rodriguez said. “We did just enough with the turnovers to give the offense a chance. I wasn’t comfortable till the end because of a player like Rosen.”

Rosen finished 20 of 34 for 219 yards with no touchdowns and three picks. In his previous two games against Arizona, he had five touchdowns and zero interceptions.

The humble Tate never would acknowledge it, but he got the better of his QB counterpart in a matchup between an established star and an ascending one.

Tate started the scoring with a 45-yard touchdown run – the first time Arizona has scored a TD on its opening possession this season. He thrilled the crowd with a 71-yarder in the third quarter. His 44-yard strike to Tony Ellison – who had a defender draped on him – set up Wilson’s second touchdown, which made it a 17-point game with 12:25 remaining.

Arizona held UCLA scoreless in the fourth quarter. That was a far cry from last week, when Colorado scored touchdowns on each of its final four possessions and forced Tate to convert two third downs to secure the win.

“Our coach was just talking about get-offs all week,” Wilborn said. “He told us in the second half they’re a team that comes out and fights. We had to turn it up another notch.”

As Tate and his teammates lined up in victory formation, the crowd serenaded them with chants of “U of A!” The Wildcats continued that mantra in the locker room.

“Our guys are excited,” Rodriguez said. “They should be. I’m proud of them.”

Arizona improved to 4-2, 2-1 in the Pac-12. The Wildcats’ four victories halfway through the season are more than they had all of last year (three).

Although they lost some defenders during the game – freshman Scottie Young Jr. left in the second quarter, and defensive tackle Parker Zellers was ejected for targeting in the third – the Cats are relatively healthy. Their youthful defense is making plays. And they finally have found their quarterback.

While furthering one streak – two wins in a row – the Wildcats ended another that had been grating on them.

“It means a lot,” Tate said. “We haven’t beaten them in five years. That’s half a decade.”

Tate in the record books

In the last eight days, Khalil Tate has written his name in the Arizona football record books twice. He now has two of the six best single-game rushing performances in Arizona history, and owns the UA and Div. I FBS record for most single-game rushing yards by a quarterback. Here are the numbers

Greg Hansen: Khalil Tate is spectacular again, and suddenly anything is possible for Wildcats

The Wildcats haven't had this kind of star power on campus since Tedy Bruschi wore cardinal and navy.

Arizona football: On monster performances, fight night, and a friendly face back on the Wildcats' sideline

From remembering the Wildcats' last win over UCLA to another monster performance, Star reporter Zack Rosenblatt takes you inside Arizona Stadi…

Michael Lev and Zack Rosenblatt talk about Arizona’s 47-30 win over UCLA and how different this season with Khalil Tate at quarterback. Plus, …

Khalil Tate has rushed for 557 yards, completed 80 percent of his passes and scored eight touchdowns in the last eight quarters, and that all …

Since May 2015, five men connected to UA athletics have been accused of rape or domestic violence.

Notes, quotes and stats from the Arizona Wildcats’ 47-30 victory over UCLA

Pertinent factoids, words and numbers from the Cats' impressive win over the Bruins.

Arizona adds a running back to its 2018 recruiting class.

Arizona Wildcats' homecoming game vs. Washington State to kick off at 6:30 p.m. on Pac-12 Networks

Cats-Cougars will be the fourth UA game in a row to air on the conference's cable channel.

The Star's exclusive, in-depth breakdown of the Cats' impressive win over the Bruins.

Woods becomes the third player to commit to Arizona in a four-day span.

The Wildcast Episode 29: Why wasn’t Khalil Tate starting from the get-go?

Zack, Michael and Justin chat after RichRod’s weekly press conference about, of course, Khalil Tate and discuss the UA coach’s answer to a que…

Khalil Tate is the phenom early in the 2017 University of Arizona football season. Here is a collection of photos of the quarterback, dating b…

Colin Schooler’s pass breakup on a two-point conversion attempt preserves a 45-44 UA victory and puts the Cats one win away from bowl eligibility.

Arizona coach Rich Rodriguez says quarterback Khalil Tate doesn’t need to be Superman for the Wildcats to win in Tempe this weekend. “Just take what they give us,” Rodriguez said. Oregon held Tate to just 32 rushing yards last week.

Rodriguez was known to have expletive-filled tirades at team members. “The next coach should put more emphasis on hugging ’em and loving ’em,” former UA coach Dick Tomey says.

Arizona running back J.J. Taylor breaks free during the first quarter in the Wildcats win over UCLA at Arizona Stadium. Taylor finished with 64 yards on 16 carries..

UA’s Khalil Tate is one of two quarterbacks to win the Pac-12 Offensive Player of the Week three times in succession. The other: Rodney Peete.