Khalil Tate could return from his ankle injury against Oregon … or not.

Rhett Rodriguez could make his second straight start … or not.

Such was the state of the Arizona Wildcats’ muddled quarterback situation Monday night. UA coach Kevin Sumlin said on his weekly radio show that he “probably” will make a decision sometime Tuesday.

“I thought Rhett did some things that were really good, and there were some things he would take back,” Sumlin said. “He’s very, very critical of himself. But in the end, he gave us a chance to win the game. That’s the takeaway.”

Sumlin decided to sit Tate, who has been slowed by a sprained left ankle since early September. Sumlin initially suggested Tate would be out for a week, but Monday he said the junior’s status would require further evaluation. Players were off Sunday. The Wildcats conducted a light practice Monday afternoon.

“We’ll talk about it tonight,” Sumlin said Monday. “Then I’ll have a discussion with him tonight or tomorrow morning about where he is, and we’ll go from there.”

Tate attended the UCLA game in street clothes. He did not practice last week. Sumlin said Tate “was engaged all week with the other quarterbacks, with the team.”

Tate had started 15 straight games before sitting against UCLA. He exited after the second offensive series the previous Friday at Utah after aggravating the ankle on a tackle by the Utes’ Chase Hansen. Freshman Jamarye Joiner played the next two series before giving way to Rodriguez.

Neither Joiner nor fellow freshman Kevin Doyle played against UCLA. Sumlin said the team’s slow start — Arizona trailed 10-0 early in the second quarter — led him to veer from the third-series changeup he had thrown the previous two games. “It wasn’t time,” Sumlin said.

The No. 19 Ducks have the second-ranked run defense in the Pac-12 — a byproduct of their ability to play man coverage in the secondary and put more bodies in the box, Sumlin said. The countermeasures for that include adding the quarterback to the run game. Whether Tate is healthy enough to execute that sort of game plan remains to be seen.

Receiver Shawn Poindexter is in the midst of a breakout season. The senior had six catches for 106 yards and two touchdowns against UCLA — his second career 100-yard game and his first game with multiple TDs. With 30 receptions, 552 yards and four touchdowns for the season, Poindexter has obliterated his previous career bests.

Several of Poindexter’s catches vs. the Bruins came on so-called “50-50 balls” — slightly underthrown passes that result in a one-on-one battle between the receiver and the defender. At 6-foot-5, Poindexter wins most of those.

“I thought Shawn Poindexter did a nice job last week in man-to-man situations and competing for footballs,” Sumlin said. “He has size. He has talent. He was productive in that situation.”

Twice Rodriguez recognized that Poindexter had one-on-one coverage down the left sideline. Rodriguez floated the ball up, and Poindexter came down with it. Their first TD connection came on a fade route that saw Poindexter cut in front of the cornerback covering him.

“I knew that I could trust him,” Rodriguez said after the game. “Every time I throw him the ball, it’s not really a 50-50 ball. It’s more than that.”

Sumlin said teams have shifted their coverages in recent weeks to try to take Poindexter away. On his second touchdown, he faced man-to-man coverage from a corner. A safety also remained on that side of the field. Poindexter got inside leverage on the corner, crossed in front of the safety and made the catch.

“It’s been harder on him in different games,” Sumlin said. “But if they allow him to play one on one, he’s proven that he can make plays.”

Poindexter couldn’t come down with Rodriguez’s last pass, a sideline throw into the end zone on third-and-4 from the UCLA 11-yard line in the fourth quarter. Down 31-27, Arizona settled for a field goal. The Wildcats never got the ball back.

“Just a miscommunication,” Poindexter said. “Rhett was looking for the back shoulder. I was giving him the fade. By the time I realized it, (it) was too late.”

A look at RhettRod's career from his time at Catalina Foothills High School to Saturday's start at UCLA.

Every week throughout the season, we’ll take a look back at the Arizona Wildcats’ previous game after re-watching it via the TV broadcast. Her…

RhettRod-led Arizona Wildcats come up one point short at UCLA

The son of Rich Rodriguez made his first career start and threw two TD passes, but it wasn't quite enough as the Wildcats fell to the Bruins 31-30

The 71-year-old will coach his last game Friday against Sahuaro.

The Star's Greg Hansen checks in to talk quarterback play, homecoming — and to give his prediction. 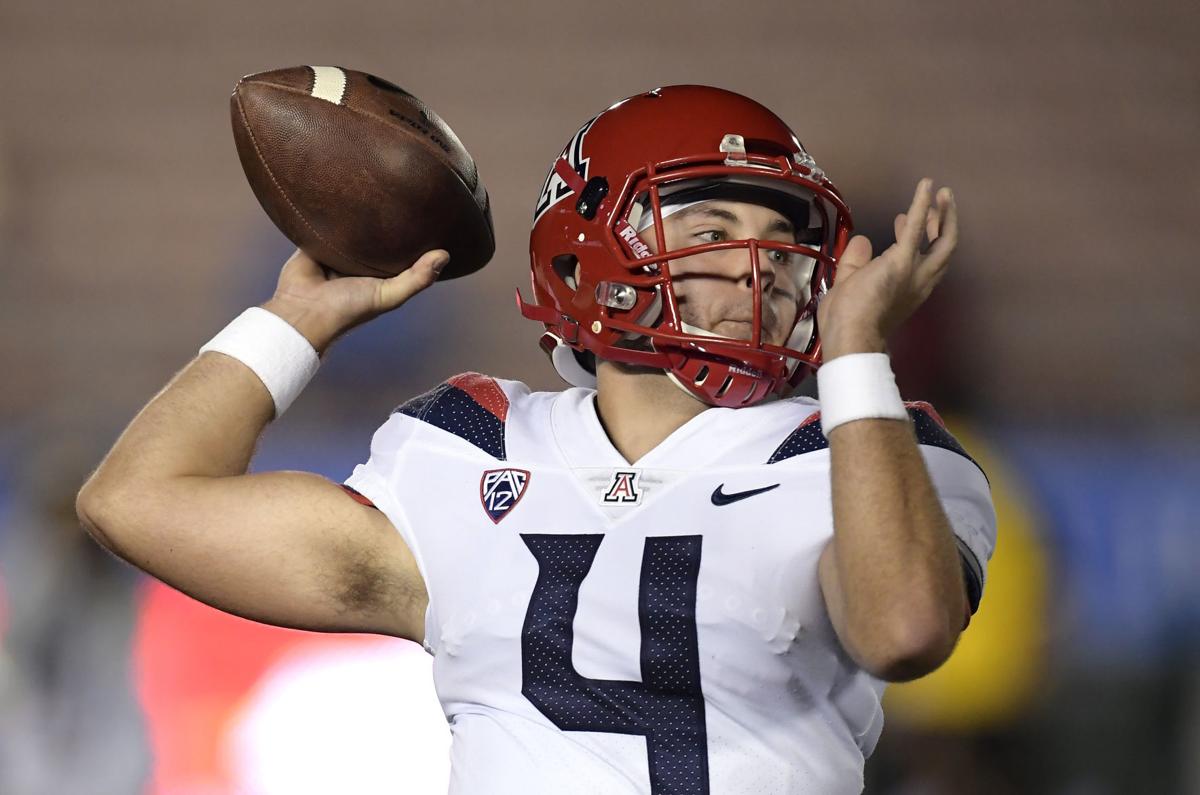 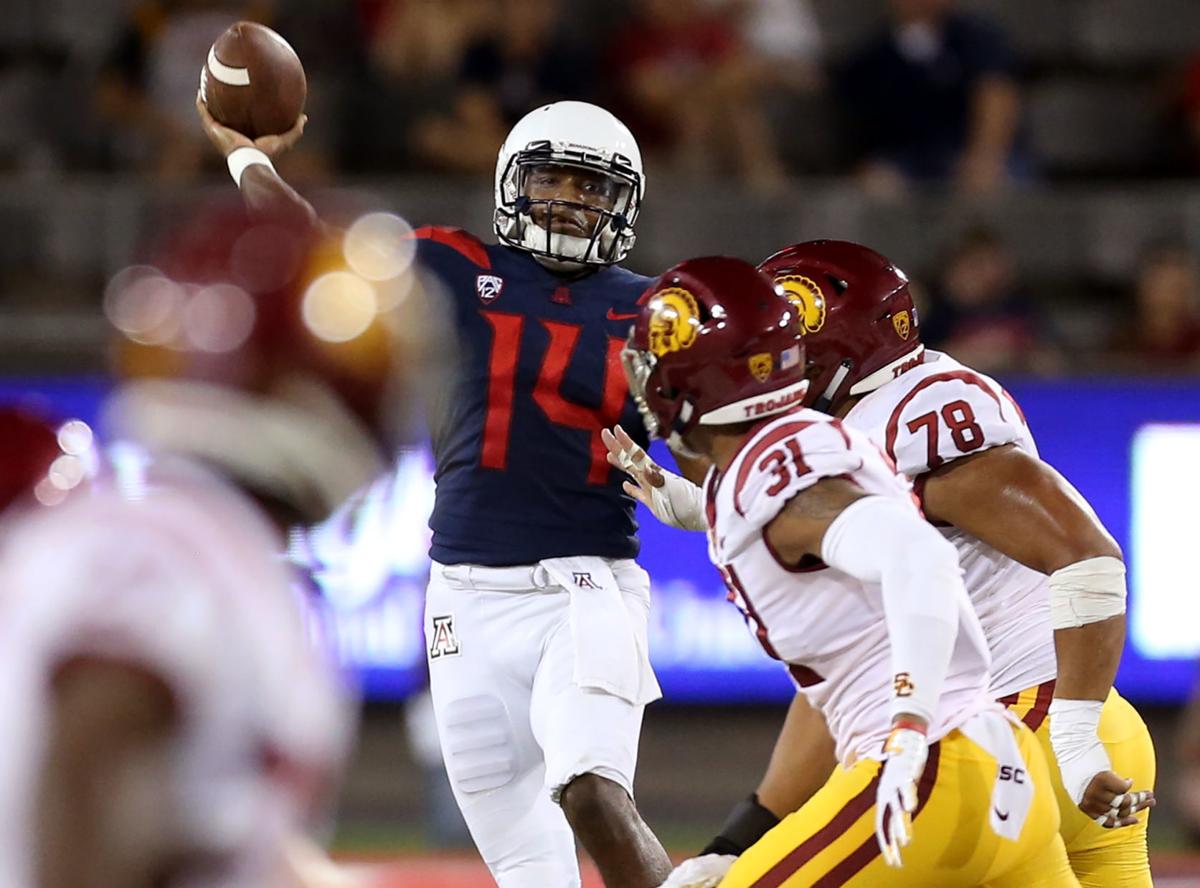 Arizona QB Khalil Tate has struggled as a passer vs. USC, never completing 50% of his throws in three starts.