Arizona had an opening for a running backs coach. Murray had no prior coaching experience. But he had plenty of running back experience, having played as recently as 2017.

Murray also had a connection to Sumlin, who helped recruit him to Oklahoma in the mid-2000s.

“If anybody else would have called me, I probably wouldn’t have taken the job,” Murray said. “Knowing Coach Sumlin, knowing what he’s about, the kind of man he is, that was one of the main reasons.”

Murray decided to leave his post as a college football analyst for Fox Sports and instantly became the Wildcats’ most high-profile assistant coach. In addition to tutoring Arizona’s running backs, the 2014 AP Offensive Player of the Year also is working closely with the return men during spring practice.

Murray met with the Tucson media for the first time earlier this week. He discussed his relationship with Sumlin, recruiting, his coaching philosophy and working with J.J. Taylor, among other topics. Portions of the conversation have been lightly edited for context and clarity.

What do you remember about Coach Sumlin when he was recruiting you?

A: “He’s just the same guy he is today. He’s not a screamer. He’s not a yeller. Extremely smart and sharp when it comes to X’s and O’s. He’s a people person and a players’ coach. Just remembering the time we had in Norman, the two years he was there, everybody loved him. I know the receivers, Juaquin Iglesias, Malcolm Kelly, those guys loved him and played extremely hard for him.

Did he recruit you all over again?

A: “He did. He’s good at it. But he didn’t have to do too much recruiting because this is a place where I wanted to be. It’s a family atmosphere here. Offensively, having the chance to work with Coach (Noel) Mazzone and the rest of the group, it’s pretty special.”

You were already a successful broadcaster. Why not continue down that path?

A: “That was the plan, and get into coaching at 34, 35, later down the road. (Murray turned 31 in February.) But this was an opportunity I felt would benefit me individually, and collectively as a team. I knew I could come in and help the guys. It was something I wanted to do.”

Did you miss the competitive element of being part of a team?

A: “I did. … Having this opportunity to really dive into the film, dive into players individually and collectively and sit back and learn, from the passing game to the protection game, it’s been an awesome experience thus far. I’m extremely excited to be on this team and hopefully help us win.”

A: “I’m originally from Vegas, so I’m used to the heat. I spent a little time down here doing 7-on-7 tournaments back in the day when I was at Bishop Gorman High School. It’s great. It’s a beautiful campus. I’m extremely excited to be here.”

What’s your message to recruits?

How much has the recruiting process changed since you went through it?

A: “A lot. I’m still learning the rules every single day. I gotta check in with our guys and make sure I’m not doing anything illegal.

“It’s changed a lot with the whole social-media aspect. I find myself on it quite a bit just to relate to the kids a little. You’ve gotta move on with the times. You’ve gotta be able to adapt.”

How would you describe your coaching style?

A: “I would say I’m laid-back until I’m not, until they make a mistake or do something they shouldn’t. I’m not a big yeller. I’m not a big screamer. For me, it’s about teaching them the right thing, teaching them the right mechanics of the game. Making sure they’re taking what we learn in the classroom and doing it on the field. Some guys learn better on film; some guys learn better with reps. I try to find out who’s good at what.”

What’s the main message you try to convey to your running backs?

A: “Just compete. The game can be taken away so (quickly). I want my guys to work hard, play hard and compete at a high level individually and collectively. I want a guy who’s going to be able to do all three things: running the ball, obviously; catching; and blocking, protecting the quarterback. The kind of guy who wants to do it all and doesn’t want to come off the field.”

What’s your assessment of J.J. Taylor?

A: “He’s different. He’s a smaller guy, but he runs with a full load. He’s a true competitor. We’re not forcing him in there, trying not to get him beat up. Most running backs would say, ‘All right, I’m good with that.’ But … he wants to be in there. He wants to compete at a high level. He’s an intelligent young man (who) has a bright future. He’s leading the team the right way.”

J.J. had a fumbling issue last year. How have you approached that with him?

A: “As a running back, I’ve dealt with that. In 2014, I think I had a fumble in my first five or six games. It’s something I teach during ball-security (drills). After that, I won’t harp on it. I don’t want that embedded in his head. I want him to be able to just go out there and run. I don’t want him thinking about ball security while he’s actually playing.

“We work on it every single day. It’s something that’s extremely important. Protecting the ball and protecting the quarterback. Those are our two deals.”

What are you seeing from the rest of the RB group?

A: “When I took the job, the one message that I got from all the staff was how great my room is. They’re tremendous workers. They give great effort at all times.

“When you’re a running back, it’s not like at receiver, where you have three or four guys out there at a time. You have one guy at a time. They’re all selfless guys. They’re all pulling for each other. That’s the rooms I’ve always been a part of. Close rooms. It’s great that I have one here.”

• Details: Tickets are free; parking is $5

Arizona’s J.J. Taylor ready to grip it and rip it after prolific but flawed 2018 season

After rushing for more than 1,400 yards — but fumbling too many times — the veteran tailback is focused on ball security in spring camp.

The quarterback discusses everything that went wrong in 2018 — and how he can go about making it right in his final campaign.

Suddenly the old guy in the UA receiver room, Peterson is embracing his newfound role as a veteran leader.

The Wildcats’ offensive coordinator and QB coach talks all things Tate, from his performance in 2018 to where his game is now, on and off the field.

Mitchell got hurt in high school and wasn’t a Sumlin recruit; the coach honored his scholarship anyway.

Arizona Wildcats on the lookout for leaders, might find some on defense

Jace Whittaker, Colin Schooler and Scottie Young Jr. are among the candidates to assume that responsibility.

The Wildcats drop their first series against the Sun Devils since 2016.

The day after Arizona punched its ticket to the WNIT Final Four for the first time in 23 years, sophomore guard Aari McDonald became an Honora…

Murray tweets - on April 1 - that he's joining Jason Witten in returning to the Dallas Cowboys.

Big problem: Lack of bulk on D-line might be Arizona Wildcats’ largest concern

The UA has the makings of a suitable rotation on the interior of its defensive line, but many questions linger.

Back from injury, Arizona Wildcats CB Jace Whittaker is where he wanted to be all along

After missing almost all of what was supposed to be his senior season, the veteran cornerback is determined to finish his UA career in proper fashion.

UA coach Kevin Sumlin details what went on in the team’s closed scrimmage and provides additional updates in a Q&A with the media.

The Dallas Baptist basketball player chose the Wildcats over SMU and Memphis. He isn't sure which position he'll play at the UA.

Moore, who also has worked at Arkansas and Abilene Christian, succeeds Andy Vaughn as the UA's senior director of recruiting and high school relations. 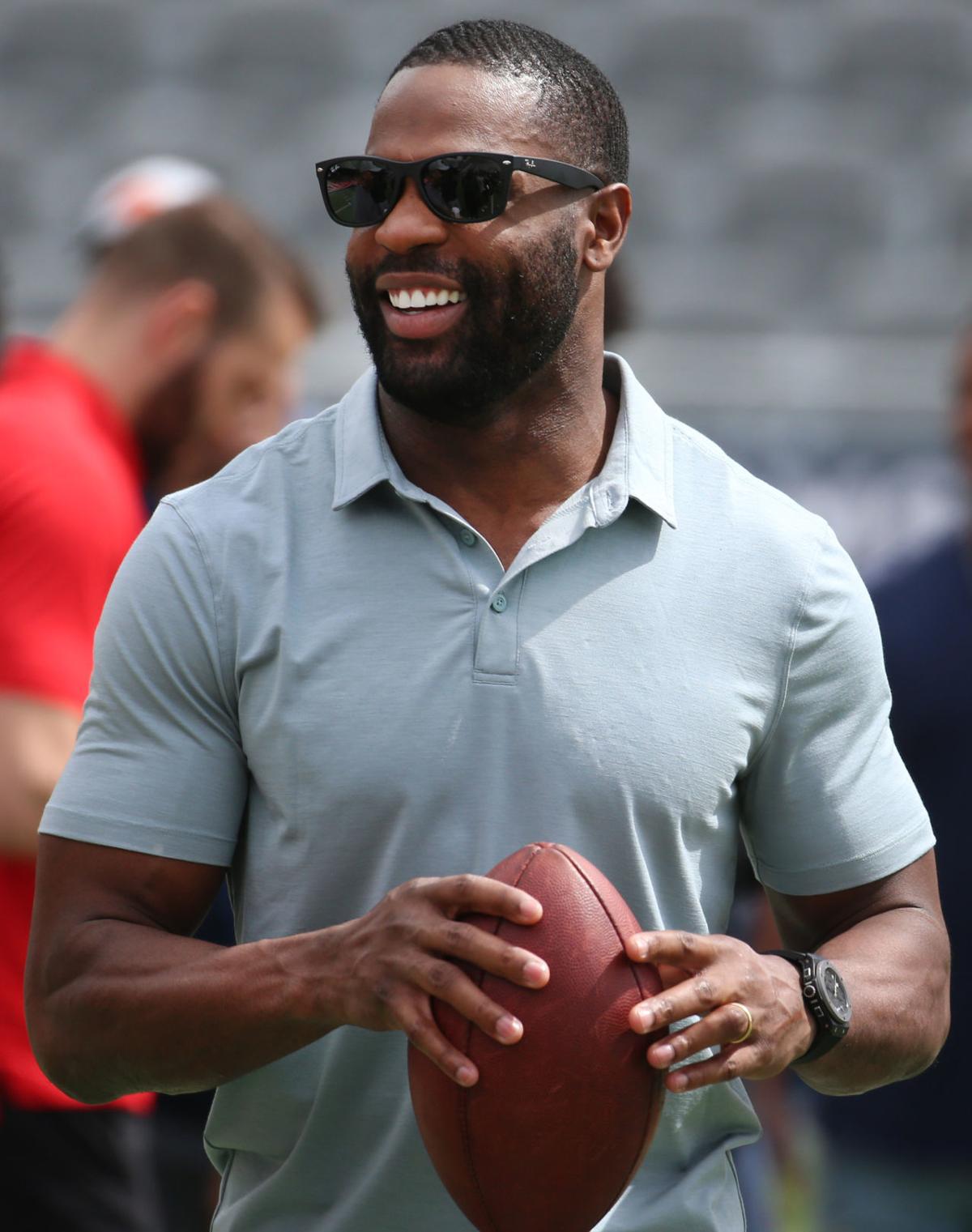 “I knew I could come in and help the guys,” said UA running back coach DeMarco Murray. “It was something I wanted to do.” 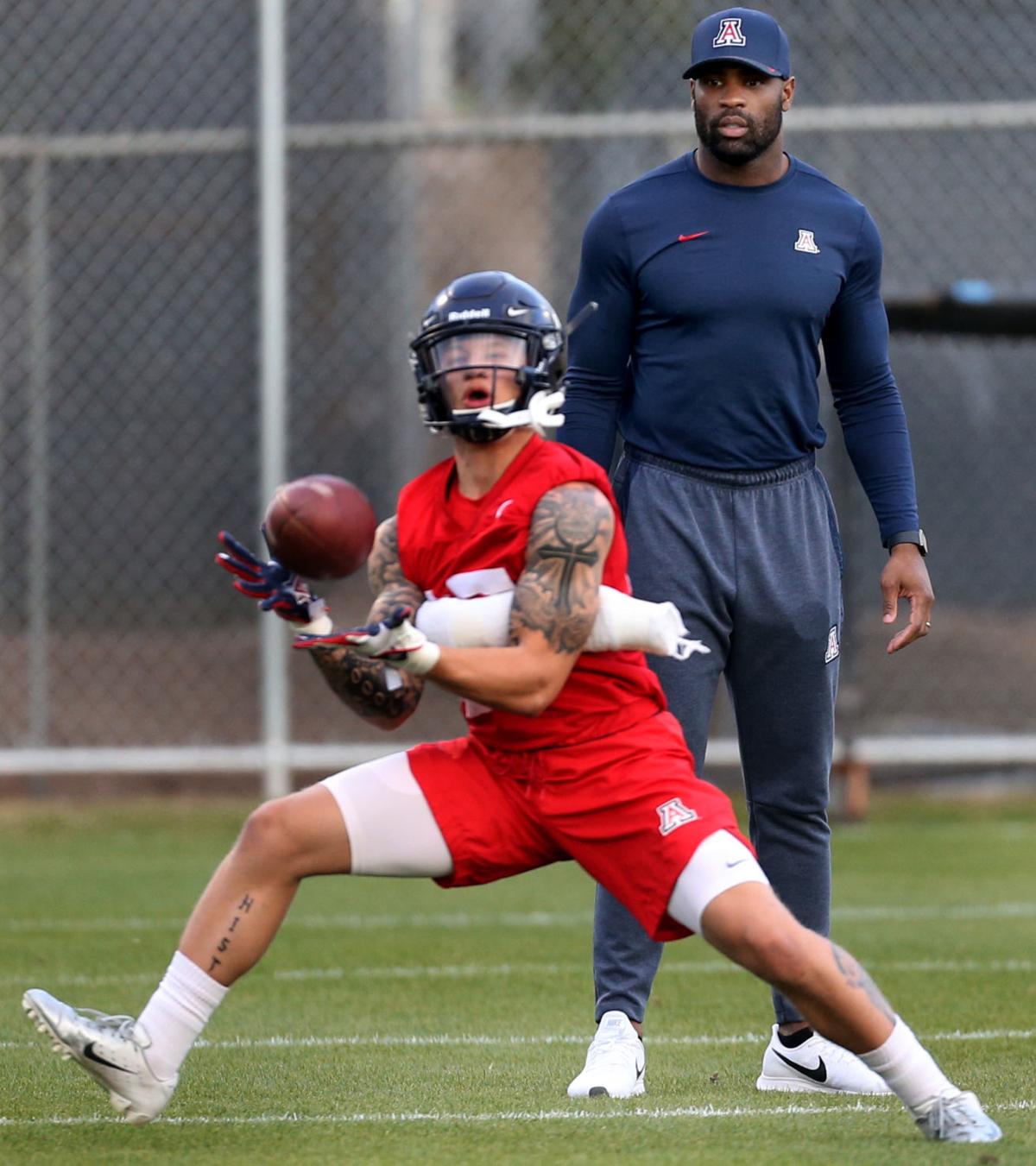