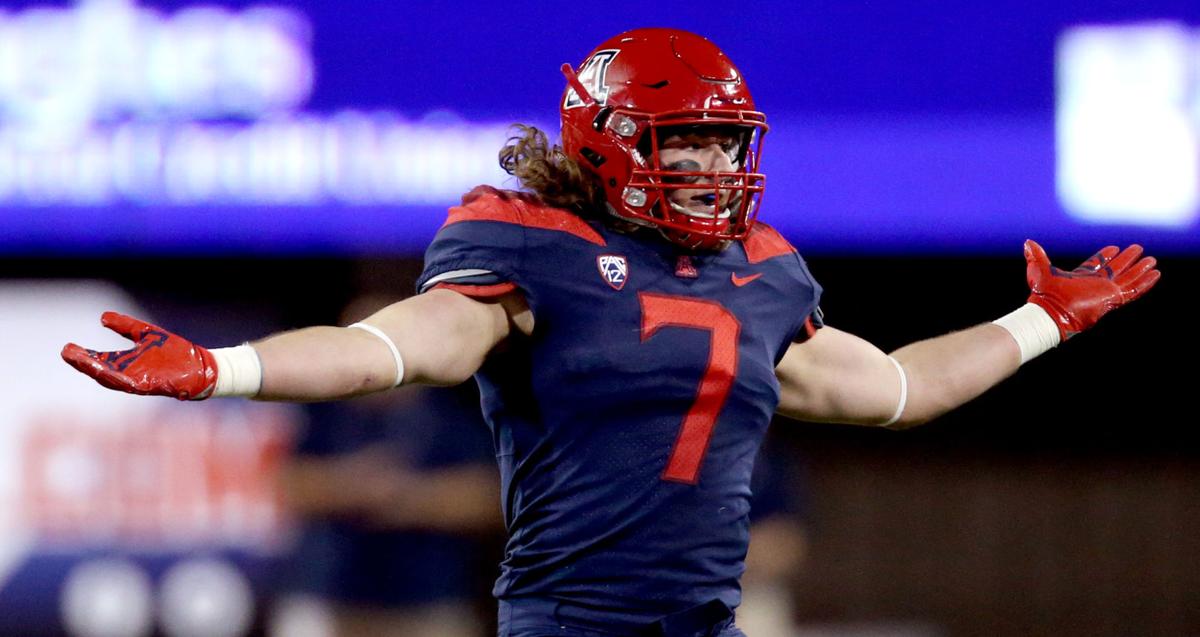 Arizona linebacker Colin Schooler is among the UA’s leaders in tackles (63), stops for losses (8.5), sacks (three) and interceptions (two), one of which was returned for a touchdown. 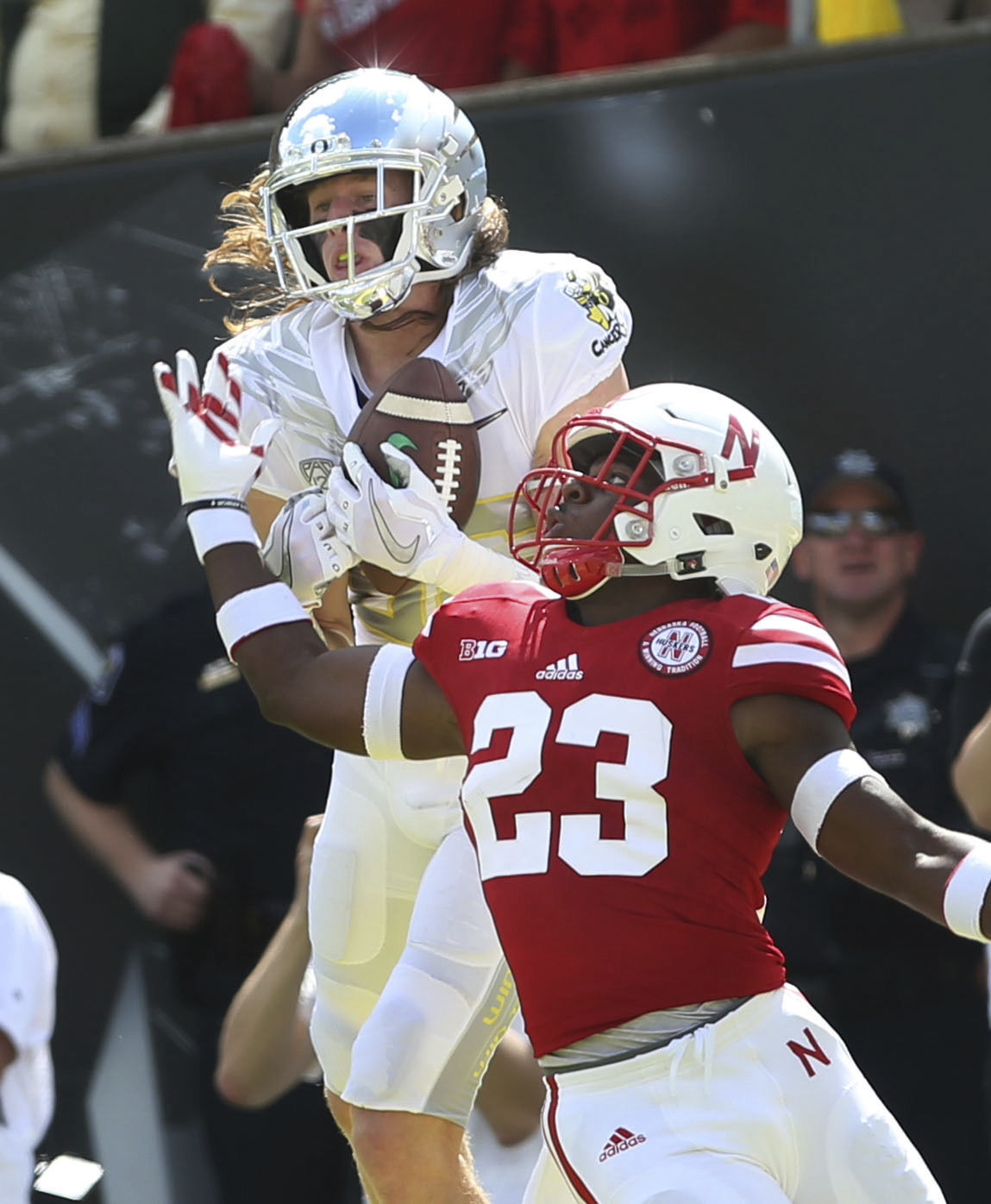 Oregon wide receiver Brenden Schooler was moved from free safety to wide receiver. Here, he pulls down a touchdown reception against Nebraska defensive back Dicaprio Bootle. 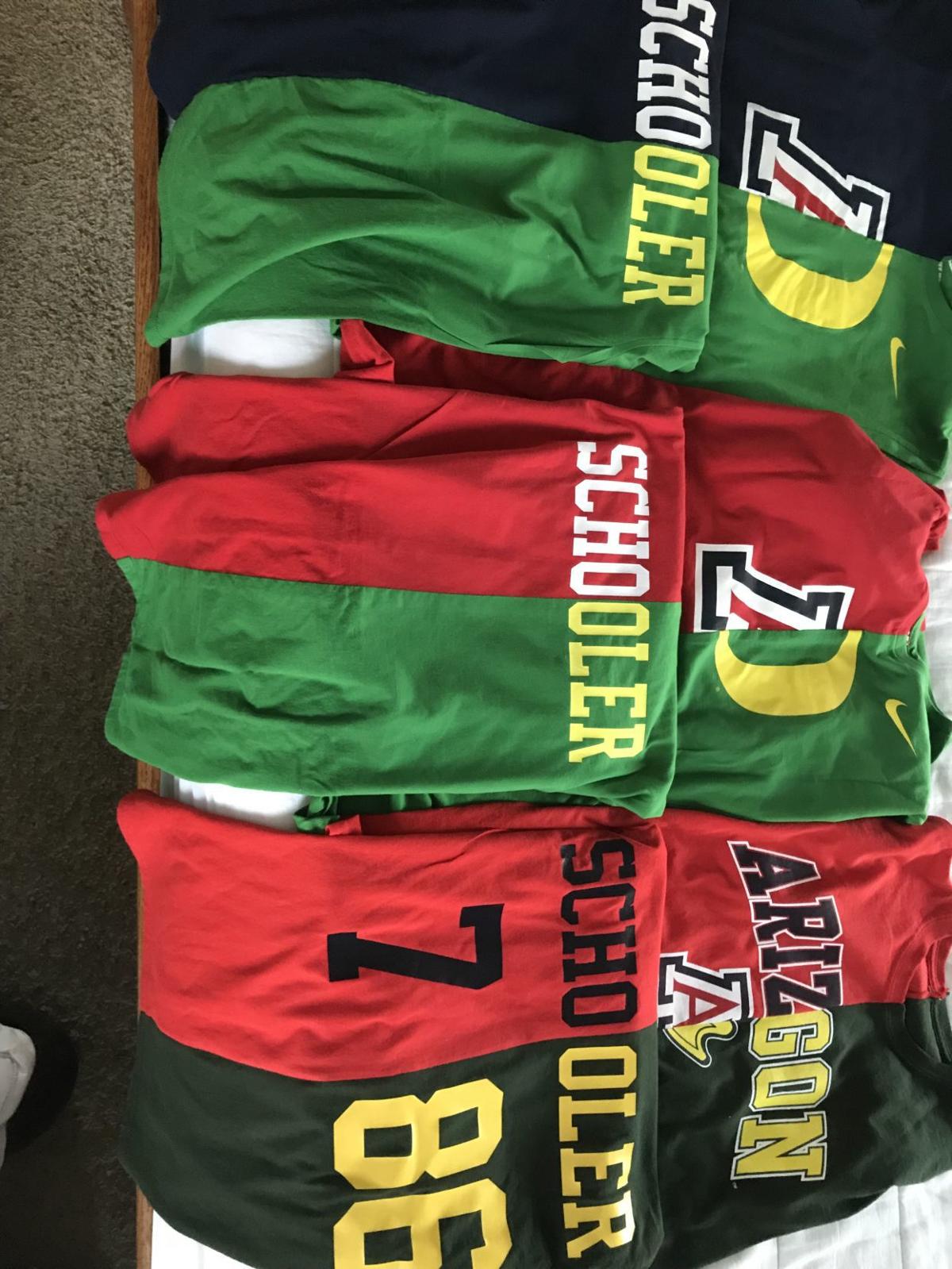 The Schooler family will wear stitched-together T-shirts featuring the names and jersey numbers of brothers Colin and Brenden.

On the one hand, this week is easy for the Schooler family. Brothers Brenden and Colin are playing in the same building, for Oregon and Arizona, respectively. The Schooler traveling party doesn’t have to be in two places at once.

On the other hand, it’s unusually stressful. Brenden and Colin always have been teammates; they never have played against each other in an organized game. And with Brenden’s move from safety to wide receiver this season, he and Colin — the Wildcats’ starting middle linebacker — could collide at Autzen Stadium.

“This week,” Colin Schooler said, “is going to be a little bit different.”

Most of them will be wearing custom-made T-shirts depicting their conflicting loyalties. The shirts are half UA colors, half UO colors, with “Schooler” spelled out across the back. Some versions feature Colin’s No. 7 and Brenden’s No. 86.

Tom Schooler understands that his sons have jobs to do. If Brenden happens to cross Colin’s path, Colin will try to hit him. Brenden will try to avoid Colin — or run through him if necessary.

“Both are going to do what they have to do,” said Tom Schooler, a former college football player and longtime high school coach in Orange County. “I just don’t want either one of them to get injured.”

Tom has overseen many a scrap between Brenden and Colin, who are 22 months and one grade apart. They competed in every imaginable contest at the Schooler house, from 1-on-1 basketball to races down the hallway, talking trash throughout.

“I’ve always been the referee, always having to step in between the two of them,” Tom said. “I always felt like I had the striped shirt on.”

But that was all fun and games. Saturday’s clash counts in the Pac-12 standings. The closest Brenden and Colin ever came to something this intense was when a high school coach paired them up in the “Oklahoma drill,” where two fully padded players smash into each other.

The boys enjoyed it — “Nothing we hadn’t already done,” Brenden said by phone Thursday — but Tom wasn’t too keen on it.

“That’s probably not a good idea,” he told the coach. “I have to go home with those guys.”

To the Schooler family’s continued puzzlement, Brenden and Colin were lightly recruited. They had athletic genes — Christine played three sports in high school and volleyball at Cal State Los Angeles — and productive football careers that concluded at Mission Viejo, an Orange County powerhouse.

Yet Brenden’s only offer — until Oregon stepped up late — came from Wyoming. With all due respect to the Cowboys, Brenden had higher aspirations.

Brenden was planning to go to junior college to further prove himself. But Oregon had an unexpected opening, and then-secondary coach John Neal pushed for the older Schooler brother. He committed to Oregon on June 30, 2016, and enrolled soon after — about five months after signing day.

Brenden ended up starting 10 games at free safety. He led the team with four interceptions and ranked third with 74 tackles.

Oregon changed coaching staffs in the offseason, and a few days into training camp Willie Taggart asked Brenden to run a route at wide receiver. He again proved a quick study. Brenden has been a wideout ever since. He ranks fourth on the team with 17 receptions for 217 yards and a touchdown.

“I would have thought they’d keep him (at safety) his whole career,” Colin said. “When they switched him to offense, I had no doubt he was going to succeed. He’s just a heck of an athlete.”

Brenden played safety and receiver in high school. He’s taller (6-2), leaner (195 pounds) and faster than his brother. Brenden join the Mission Viejo track team in the spring of his senior year. He had never long-jumped before yet placed 11th in the state.

“You knew what kind of athlete he was,” said Arizona linebackers coach Scott Boone, who tried to recruit both Schooler boys to Nevada when he was the Wolf Pack’s defensive coordinator.

“I thought he was a wideout. He could just fly. He catches everything. And he’s like his brother in terms of loving the game.”

That’s the common thread between Brenden and Colin, who eventually grew stouter (6-0, 226) and stronger than his big brother. Both played multiple sports but grew up around football. Boone happened to catch Colin working out at Mission Viejo and came away impressed with his work ethic and passion.

Yet despite being named Orange County Defensive Player of the Year — and despite Brenden’s success at Oregon — Colin’s only major-college offer came from Arizona.

The Wildcats appear to have gotten a steal. Colin ranks among the team leaders in tackles (63), stops for losses (8.5) sacks (three) and interceptions (two). The freshman has returned a pick for a touchdown and broke up a pass on a two-point try to win the Cal game.

“He’s where he needs to be,” Tom Schooler said. “They’re both where they need to be.”

Both brothers said their preparation for this week is no different than any other. For Colin, Eugene is a business trip.

“I’ve never been in a different-colored jersey than my brother,” he said. “But if he has the ball, I’m gonna get him down.

“I don’t want my relationship with him to affect my play. As a competitor, I want to win. If he’s in the way, I gotta tackle him.”

Said Brenden: “When we’re in between the lines, it’s definitely all business, trying to win the game for our team. After the final whistle’s blown, after the game’s over, we’re going to be brothers again.”

The stakes are real Saturday. No matter what happens, their father will remember a time when they weren’t.

When they were little, Brenden and Colin would tag along with Tom to football practice. They would build forts with the step-over bags. Tom would wonder where they went. Then their heads would pop up from the pile of pads.

“That’s where my mind flashes back to,” Tom said, pausing to collect himself. “They were having a ball, having fun.

“They’re still doing it. It makes me so happy as a father. It makes me extremely happy to see them do what they love to do.”

More than a decade has passed since then. The fort-building, smack-talking, football-loving Schooler brothers are now Pac-12 combatants, ready to go at it one more time.

“It’s crazy to think about,” Brenden said. “But it’s about to happen.”

Team goals remain more important than personal accolades for Tate, who nonetheless has thrust himself into the Heisman mix.

RichRod: No animosity toward Oregon but 'not happy' several Arizona Wildcats commits ended up in Eugene

The Wildcast, Episode 43: Book pleads not guilty. Here’s what it means

Updated and fixed! Ryan is joined by Star public safety reporter Caitlin Schmidt for a podcast about Book Richardson’s plea, the FBIs investig…

The Wildcast Episode 42: On Arizona’s dominance over Oregon State and the recruitment of Braxton Burmeister

Michael and Zack breakdown Arizona’s dominant win over Oregon State and look ahead to the matchup at Oregon this weekend. The guys also explor…

'Trying to outscore the other team isn't going to work': Wildcats, coach Sean Miller double down on 'D'

As Adiba Nelson turns 40, she's riding El Tour — and working to provide an adaptive bike for another child

Tucsonan bikes for her daughter, who continues to defy the odds.

While the Arizona Wildcats have their QB in Khalil Tate, injuries and uncertainty plague Oregon

The Ducks’ current quarterback situation mirrors the Cats’ from a year ago, although Oregon might get its starter back Saturday.

There's almost no precedent to what is happening at Arizona Stadium.

Rapper Lil Peep died of a suspected drug overdose just before he was to perform Wednesday night at a Tucson club. He was 21.

Watch: Everything you need to know for Saturday's El Tour de Tucson

Team will head to the Bahamas next week after starting season 3-0.

The Star columnist checks in with his weekly mailbag.

The Wildcast Episode 44: On Arizona’s 2018 schedule, Willie Taggart vs. RichRod and TJ McConnell as an NBA All-Star

Michael and Zack check in live from Oregon to breakdown Arizona’s recently released 2018 schedule, talk about the recruiting feud between Oreg…

3 reasons the Arizona Wildcats have outpaced their turnaround timetable

Impact freshmen, relatively few injuries and quarterback stability have propelled Arizona to the upper half of the Pac-12 — ahead of Saturday …

What to watch for when the Arizona Wildcats visit Oregon

QB Justin Herbert to start for Oregon against Arizona Wildcats

Notes and observations from warmups before Wildcats-Ducks in Eugene.

Arizona linebacker Colin Schooler is among the UA’s leaders in tackles (63), stops for losses (8.5), sacks (three) and interceptions (two), one of which was returned for a touchdown.

Oregon wide receiver Brenden Schooler was moved from free safety to wide receiver. Here, he pulls down a touchdown reception against Nebraska defensive back Dicaprio Bootle.

The Schooler family will wear stitched-together T-shirts featuring the names and jersey numbers of brothers Colin and Brenden.