Arizona marked the 10th stop on the commissioner’s “listening tour” since taking over for Larry Scott on July 1.

He listened to concerns brought up by UA’s head coaches in regards to the new Name, Image and Likeness rights to the Pac-12’s role in the College Football Playoff, among other topics. Here are three main takeaways:

Since taking over as commissioner, there’s one topic that Kliavkoff is asked about seemingly every day: the accessibility, or lack thereof, of the Pac-12 Networks.

“There’s letters about it, emails about it and certainly my Twitter feed is full of it,” he said.

Kliavkoff sees a stark contrast between the Pac-12’s production value and the content distribution, saying he’s “proud” of the network’s commitment to broadcasting 850 live conference competitions per school year and the in-studio shows which feature highlights and analysis.

The larger and more important issue is the distribution of live content to homes and streaming services, something that’s been a point of contention for several seasons now. The Pac-12 has its hands tied until 2024, when its current media right deal expires.

The commissioner does not expect things to change until 2024.

“I want to be transparent with our fans about that,” he said. “That’s a difficult thing to fix and there’s no easy answer there.”

The good news is that once those rights expire in three years, the Pac-12 will have total autonomy over all of its content, giving the conference much greater flexibility when negotiation time arrives.

On Sept. 28, executives involved in the College Football Playoff committee will meet to discuss a 12-team playoff format which could go into effect as early as the 2023 season.

The 11 university presidents who oversee the College Football Playoff talk with each conference commissioner about the proposal and the next steps. During Kliavkoff’s visits to Pac-12 campuses, he’s gathered intel from each university’s football head coach and athletic director on their take about the potential expansion.

“The conference is very much in favor of expanding the college football playoffs,” he said.

However, the Pac-12 isn’t willing to dive head-first into expansion without fully vetting the proposal.

The commissioner still must visit ASU and Washington. He’ll finalizes the conference’s stance after that.

“We’ll have a position ready for the 28th,” he said

3. The new alliance is about three things.

Soon after Big 12 powerhouses Texas and Oklahoma announced their move to the SEC starting in the 2025 season, an alliance was forced. The handshake agreement between the Pac-12, Big Ten and ACC commissioners — along with the 41 university presidents — shows the three leagues are aligned in their core values.

“I don’t think this is a face-off against the SEC,” Kliavkoff said.

Kliavkoff outlined the three main components of the alliance on Thursday.

The first is to accelerate how each university supports its student-athletes. This includes developmental resources in athletics, academics, leadership and career council, as well as mental health.

The second revolves around finding common ground in navigating the current governing issues in college sports such as Name, Image and Likeness and CFP expansion.

The alliance does not guarantee each conference will agree and vote the exact same way, Kliavkoff said. Rather, it’s an agreement to involve the three conferences together when those discussions are held.

The last component, which has drawn the most attention thus far, is scheduling. Both Kliavkoff and Big Ten commissioner Kevin Warren were in attendance for last weekend’s Oregon-Ohio State tilt.

Though the Oregon-Ohio State and Washington-Michigan matchups were set in stone years ago, Kliavkoff sees it as the beginning of what the future landscape will look like.

“It starts in football. It extends to women’s and men’s basketball,” he said. “Eventually, it will extend to all of our sports.”

If all goes according to Jedd Fisch’s plan Saturday night against NAU, No. 15 will be the only quarterback taking snaps on Arizona’s roster.

“My goal is to play Will the whole game,” Fisch said. “I think we need to get some continuity back there.”

Jordan McCloud took all of the second-team reps at practice during the week, presumably setting him up as the Cats’ backup quarterback.

“If going into the game, or if we decided that there was something that occurred, that he’d be ready to go,” Fisch said.

From YPA to ADOT, examining some of the numbers behind the switch from Gunner Cruz to Will Plummer.

The Wildcats’ defense has been erratic through two games; plus, Brennan Carroll’s thoughts on Arizona’s QB shakeup.

The Wildcast, Episode 344: What to make of Jedd Fisch's decision to start Will Plummer at QB over Gunner Cruz for Arizona

What's next for the Arizona Wildcats after losing 38-14 to San Diego State? For now, the biggest change is Will Plummer to start over Gunner C…

NAU's game in Tucson a homecoming for local players

For the four Lumberjacks who grew up in Southern Arizona, though, Saturday will be a de facto home game, making the trip even more special.

Hear what Jedd Fisch had to say as the Arizona Wildcats look to snap a 14-game losing streak on Saturday against Northern Arizona.

Wildcats' women's basketball rematch with Stanford set for Jan. 30, will air on ESPN2

It's the only regular-season matchup between the Cardinal and Wildcats, both of whom are coming off Final Four seasons. Stanford beat the UA 54-53 in the April 4 national title game in San Antonio. 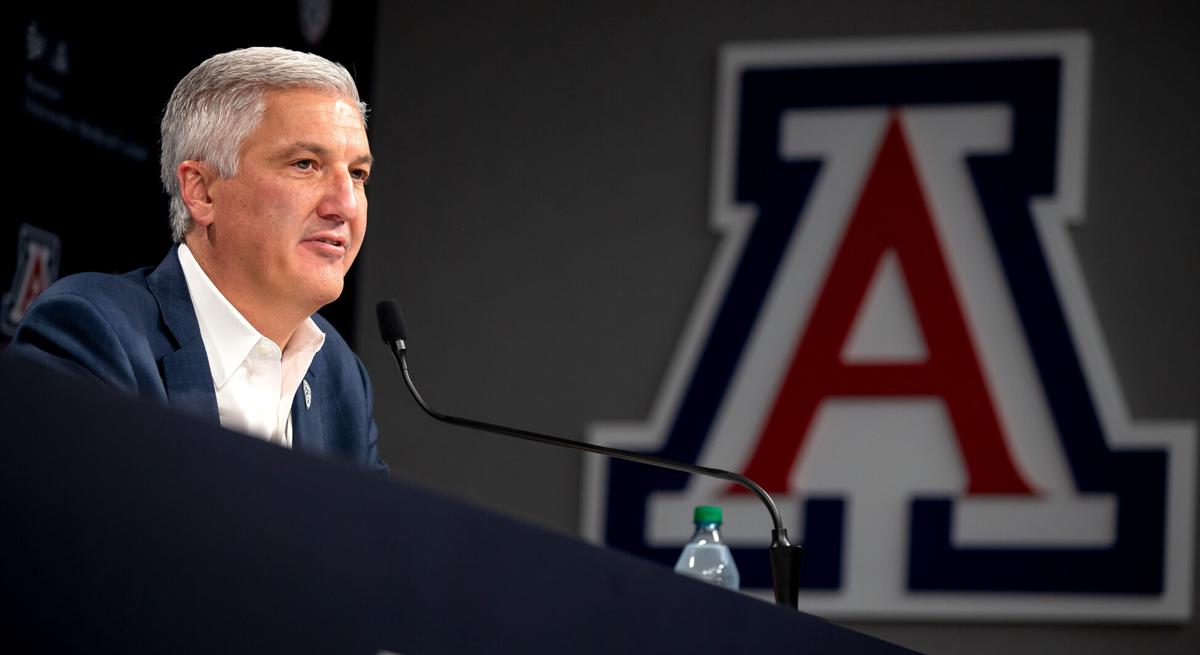