The latest news and notes from Las Vegas, where the Arizona Wildcats opened their 2021 season against BYU on Saturday.

For UA fans, Saturday's game a return to normalcy

Saturday night marked the first time Arizona football fans could watch the Wildcats in person since the Territorial Cup game ended the 2019 season.

And UA fans made the most of it, flocking to Allegiant Stadium for the season-opener against BYU.

“We don’t go to Vegas often, and I’m not a gambler, but with the new stadium for the Raiders, we thought we’ll check out the new stadium,” Eric Zagona, a 1988 UA graduate, said before Saturday night’s kickoff.

Zagona often attends Arizona sporting events with his son Gene, a senior at the UA. The chance to see the Wildcats up close in Las Vegas was too good to pass up.

“The game was hyped up to be a great game and not a blowout,” he said, “so we’re both very excited to be here.”

Saturday’s game marked a return to normalcy after the COVID-19 pandemic turned the world upside in March 2020. It happened as Arizona fans were in Las Vegas to watch the Sean Miller-coached Wildcats beat Washington on the first day of the Pac-12 Tournament.

Chris Brown, then a member of the Arizona pep band, was at PBR Rock Bar and Grill following Arizona’s win when he received a notification that spectators wouldn’t be allowed back into T-Mobile Arena for the remainder of the event.

“Then, the next morning, as the band was getting ready to head back to Tucson, we got the news that the whole tournament was shut down,” Brown said. “I remember mostly feeling disbelief, but also being scared and confused. I just remember there being so much uncertainty.”

“It was so difficult not being able to go to Arizona games this past season. Being in the Pride of Arizona was the best part of my collegiate experience, and so not being able to march and play at sporting events was difficult because I loved it,” Brown said.

John Peterson, a 2012 UA alumnus, was traveling from Tucson to Las Vegas on March 11, 2020 when he realized the world was changing.

“I was sitting at Tucson airport waiting for my flight, excited because they won and looking forward to watching,” Peterson said. “A buddy sent me a text and said no fans at the tournament. We arrived in San Diego and found out about the NBA pausing their season.”

The Peterson family continued with their vacation as planned. But things had changed.

“Vegas had no energy and was strange with no sports,” he said. “I took sports for granted and did not think It could be taken away.”

But things have a way of coming full-circle in sports. And so many of the same fans who were at “McKale North” for the 2020 Pac-12 Tournament were back in Las Vegas on Saturday.

“Being back in Vegas has been really fun,” Brown said. “This will be one of the first Arizona events that I have ever been to as a fan and not a member of the band, so it will be a new sort of experience. That said, it’s great being back, seeing other Wildcat fans on the strip and saying ‘Bear Down’ and ‘Go Cats,’ and feeling the game day energy!”

Call him Phillip or by his nickname, Scooby. Just make sure you refer to him as a college graduate.

Wright, whose official name is Philip Wright III, posted a photo of his degree. It “Scooby” instead of his birth first name on the degree.

“To all the teachers who refused to call me Scooby because ‘It wasn’t my legal name,’” Wright posted.

To all the teachers that refused to call me Scooby because “it wasn’t my legal name” pic.twitter.com/de0pdG4LQ7

During his three-year career at the UA, Wright totaled 270 tackles and 17 sacks, with the bulk of his production stemming from his historic 2014 season. After tabbing 164 tackles and 15 sacks in ’14, the All-American Wright was named the Pac-12 Defensive Player of the Year and was a recipient of the Bronko Nagurski Award, Chuck Bednarik Award and the Lombardi Award.

Wright left the UA early and was taken in the seventh round of the NFL draft by the Cleveland Browns before a brief stint with the Arizona Cardinals, the XFL’s DC Defenders and AAF’s Arizona Hotshots.

Wright now competes in jiujitsu and muay thai fighting while pursuing a firefighting career in California’s Sonoma County. Wright was inspired to pursue firefighting after his time in the AAF.

By losing Saturday night, Arizona now carries the longest losing streak in college football at 13 games. Louisiana-Monroe and Old Dominion have lost 12 straight, with Massachusetts (10) and Vanderbilt (9) right behind.

Former Arizona quarterback Grant Gunnell, who transferred to Memphis following the UA’s dismissal of Kevin Sumlin, didn’t dress for the Tigers in their 42-17 win over Nicholls State on Saturday. Freshman Seth Henigan started in place of him.

Memphis head coach Ryan Silverfield said after the game that he doesn’t “foresee him being ready for the next few weeks.”

Silverfield didn’t disclose why Gunnell was inactive on Saturday. Gunnell was named Memphis’ starter after preseason training camp, but will have to wait to make his debut.

Who is Sam, and why is he good?

The title sponsor of Saturday night’s showdown was Good Sam.

Founded in 1935, Good Sam is a Colorado-based company that specializes in selling and renting recreational vehicles (RVs) in the U.S. and Canada.

Faces in the crowd

Former BYU quarterback Zach Wilson, the New York Jets' No. 2 pick in the NFL draft, was in attendance for Arizona-BYU.

The video board at Allegiant Stadium showed Wilson on the screen and a BYU-heavy crowd erupted in cheers.

In three seasons at BYU, Wilson passed for 7,652 yards and 56 touchdowns.

Woof. Washington, a 22.5-point favorite heading into Saturday’s game against Montana, fell to the Grizzlies 13-7 in Seattle.

UW’s loss marks the third time a Pac-12 school has fallen to an FCS opponent.

Washington was 14-0-1 all-time against Montana before Saturday. The tie occurred in 1929, when both programs were a part of the Pacific Coast Conference.

The last time an FCS opponent beat a Pac-12 team was in 2016, when Washington State fell to Eastern Washington.

Arizona converted on two fourth downs inside its own 30-yard line in Saturday's first quarter.

Allegiant Stadium, which finished construction in July 2020, cost a whopping 1.9 billion dollars to build, which makes it the second-most expensive stadium in the country behind SoFi Stadium in Los Angeles.

The Las Vegas Raiders’ home stadium boasts more than 75,000 square feet of video boards and 2,200 televisions. A 19 million-pound sliding tray underneath the turf moves the grass in and out of the stadium.

Located above the north end zone of the stadium is the Al Davis Memorial Torch. Standing at 92 feet tall, the torch honors the late Raiders owner. The flame is lit before every Raiders home game.

Saturday’s game featured 42 Arizona natives, with the Wildcats boasting 34 of them.

Read updated stories and analysis and get Greg Hansen's take on the start of the Jedd Fisch era.

The Cats lose to the Cougars in the Good Sam Vegas Kickoff Classic, extending their school-record losing streak to 13 games.

The Star's longtime columnist checks in with his thoughts on Arizona's latest basketball hire, why a Sahuaro High School grad might stick in the NBA and how Arizona is doing the right thing by inducting two long-ago baseball players into its hall of fame.

The Star’s Michael Lev presents five storylines of interest as the Arizona Wildcats open the 2021 season Saturday night against BYU in Las Vegas.

In his first installment of the 2021 season, 'Mr. Football' explains why age and experience will play a factor — and how the Wildcats can pull off an upset.

Three things to keep an eye on when the Cats take on the Cougars at Allegiant Stadium in Las Vegas.

Field Pass: Everything you need to know about Saturday's UA-BYU game

Check out Saturday's depth charts and matchups, and see who reporter Michael Lev thinks will win the season opener between Arizona and BYU.

Notes and takeaways from pregame warmups for the season opener between Arizona and BYU.

By the numbers: How BYU held off Arizona in Saturday's season-opener in Las Vegas

Key stats from Arizona's 24-16 loss to BYU and how the Wildcats' second-half rally got stopped.

Notes, quotes and stats from the Arizona Wildcats’ 24-16 loss to BYU

Notable numbers, words and factoids from the Cats' season-opening setback against the Cougars.

Watch Now: Analyzing the good and bad from Arizona's season-opening loss to BYU

The Star's Michael Lev, Justin Spears and Alec White report from Allegiant Stadium with their thoughts on the outcome of Arizona's week 1 game vs BYU

Interactive report card: Check out Cats’ grades vs. BYU, then enter yours

The grades are in for the Arizona Wildcats’ 24-16 loss to BYU on Saturday. After checking out our grades and comments, try our interactive fea… 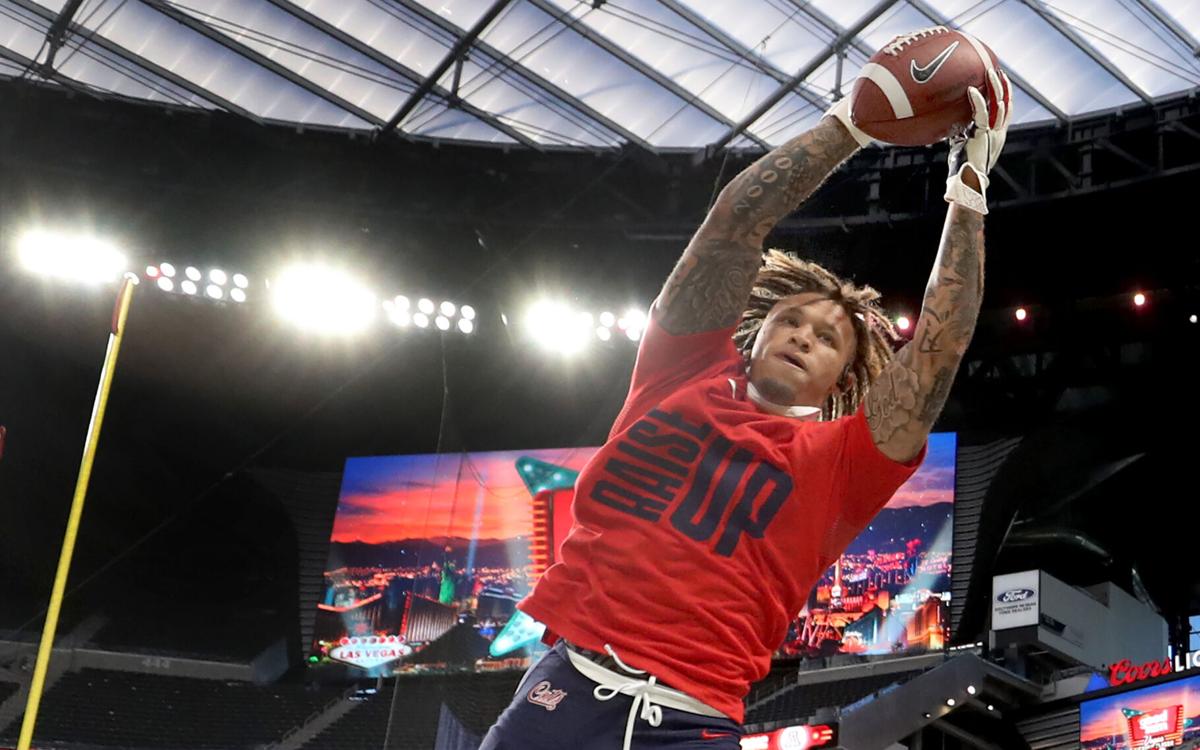 Arizona wide receiver Jaden Mitchell leaps for a catch in the back of the end zone as the Wildcats prepared for Saturday’s season opener against BYU in Las Vegas. Saturday’s game was still being played when the Star went to press. For complete coverage, visit Tucson.com. 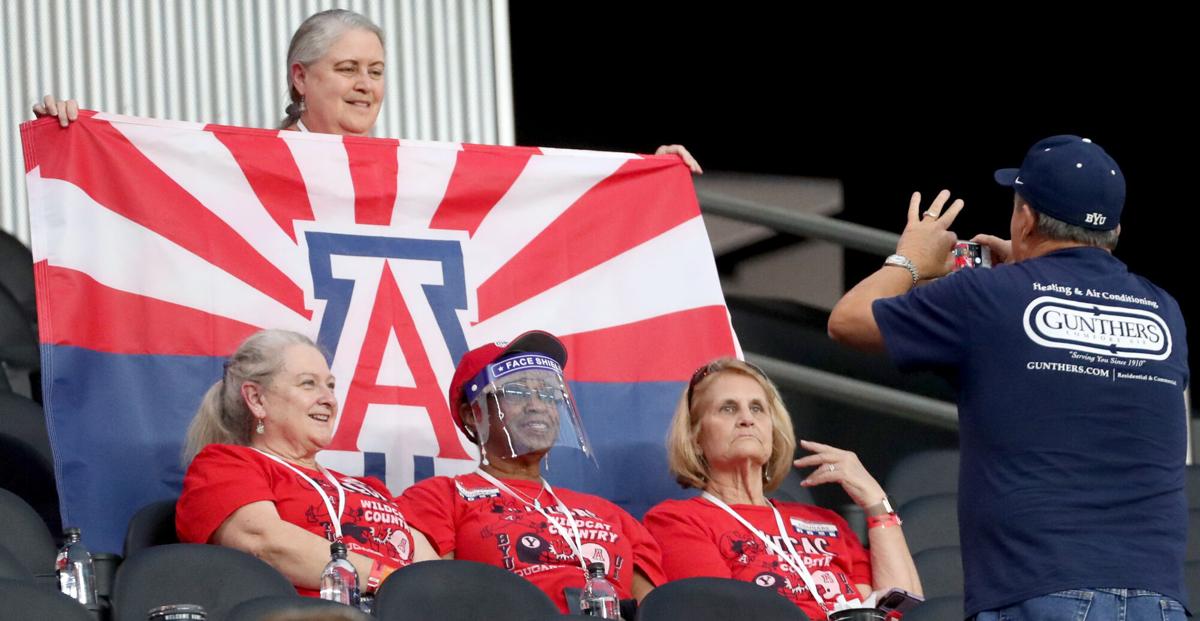 A few Arizona fans pose for a photo just before kickoff against BYU. 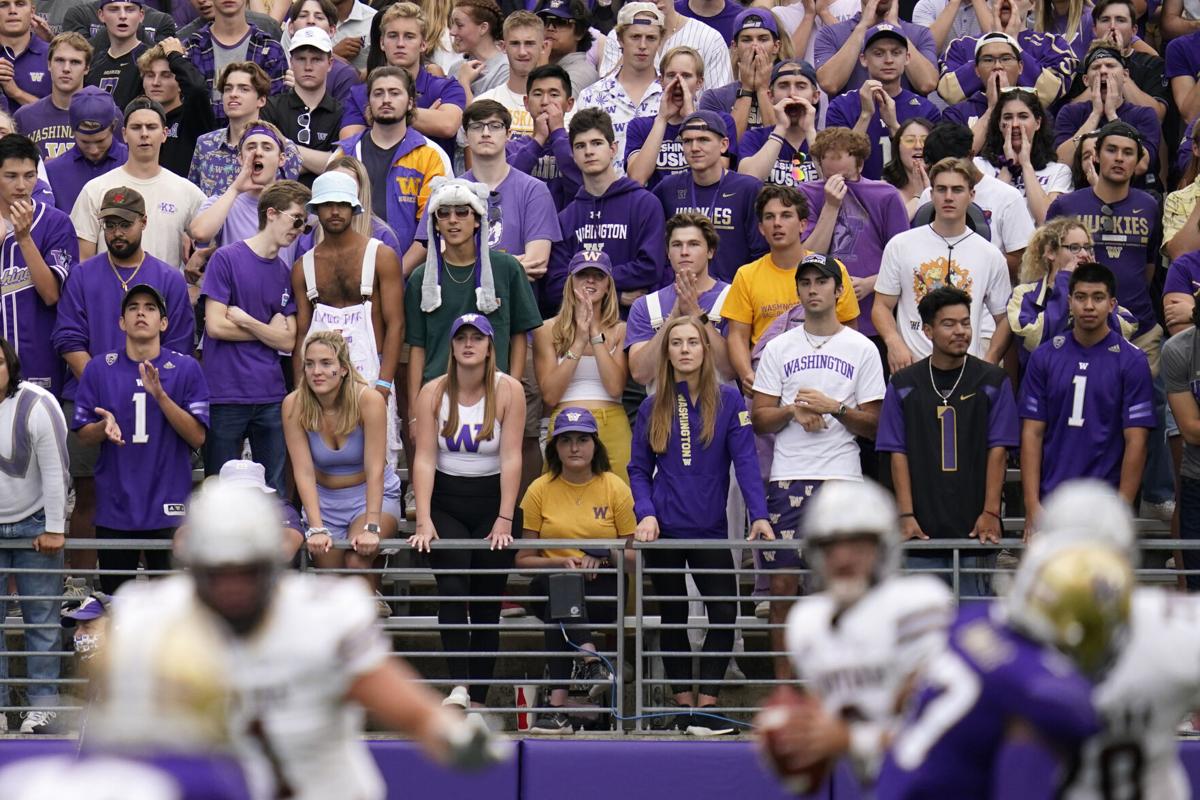 Washington fans look on from the student section in the first half of an NCAA college football game against Montana. 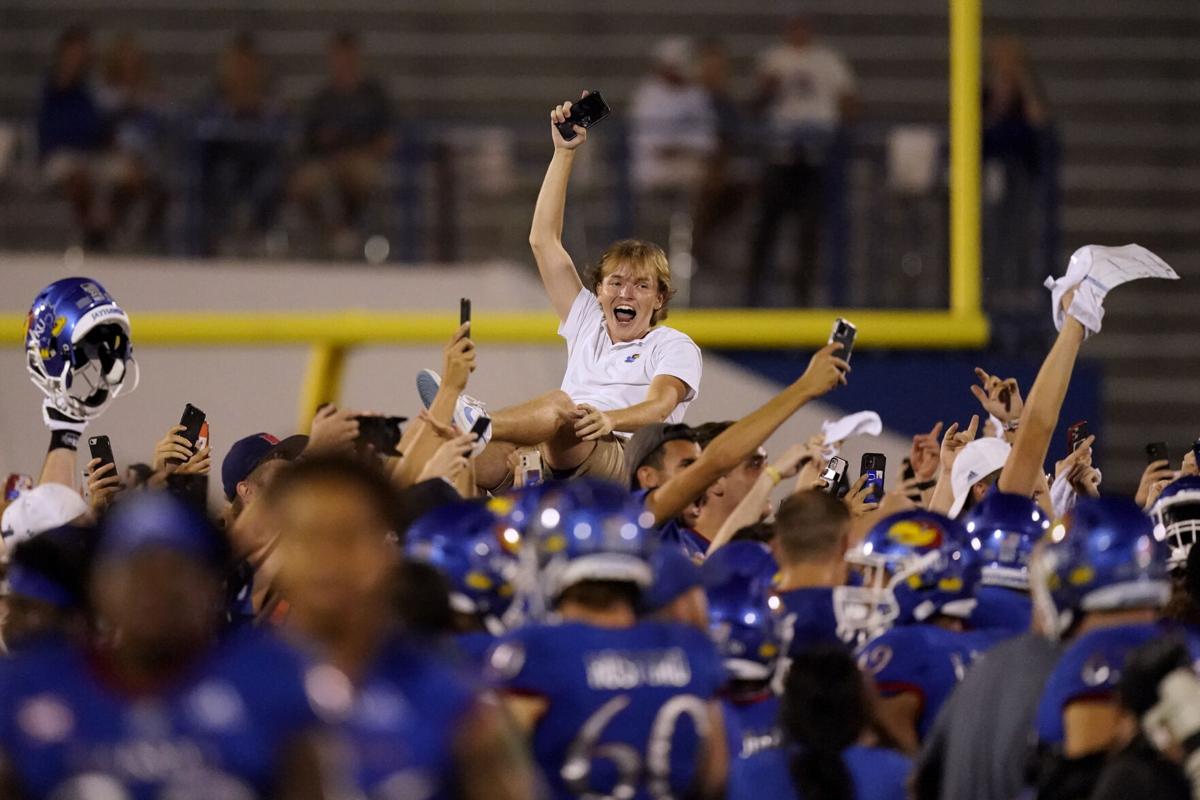 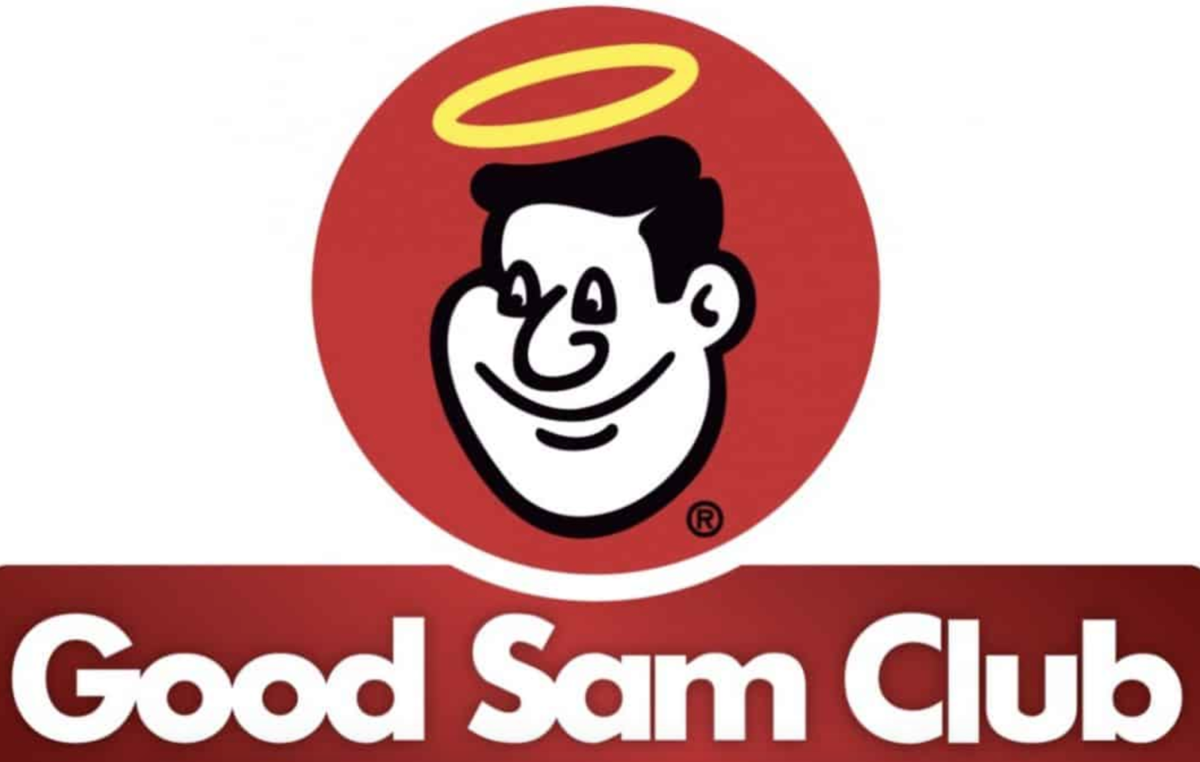 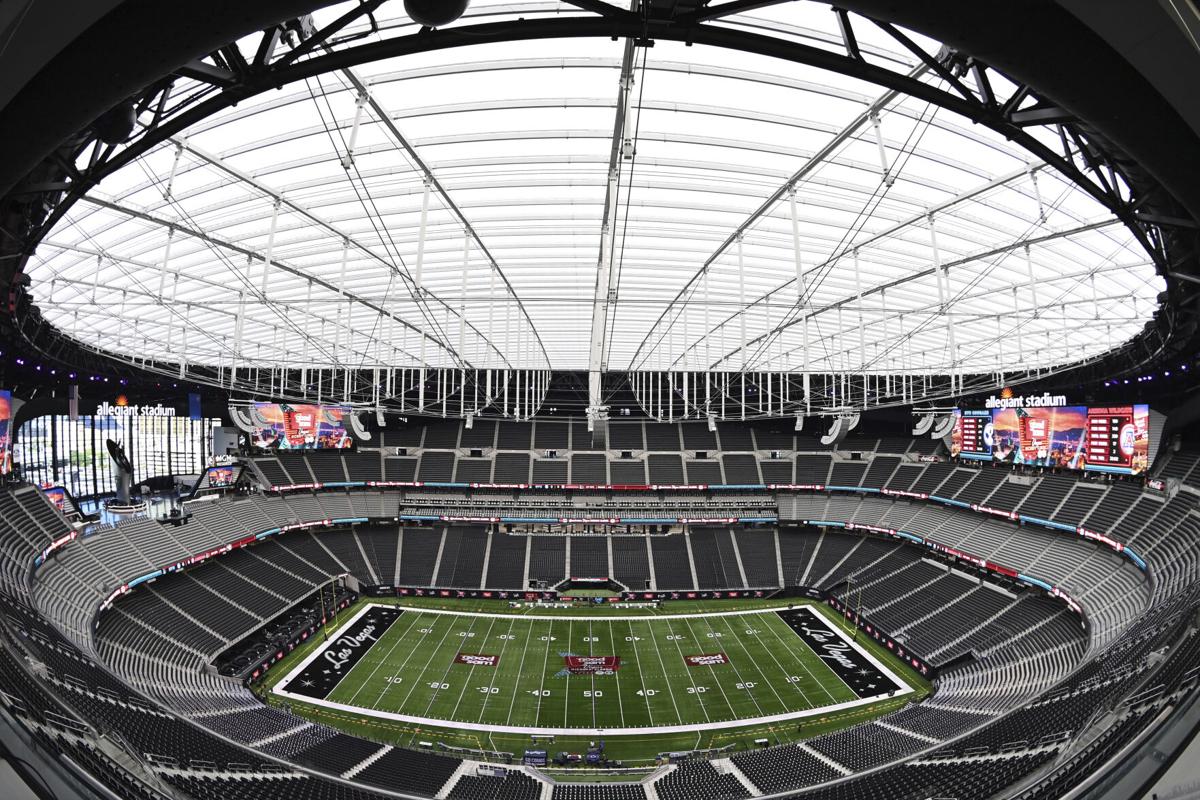 The playing field is seen before the Good Sam Vegas Kickoff Classic, an NCAA college football game between Arizona and BYU at Allegiant Stadium. 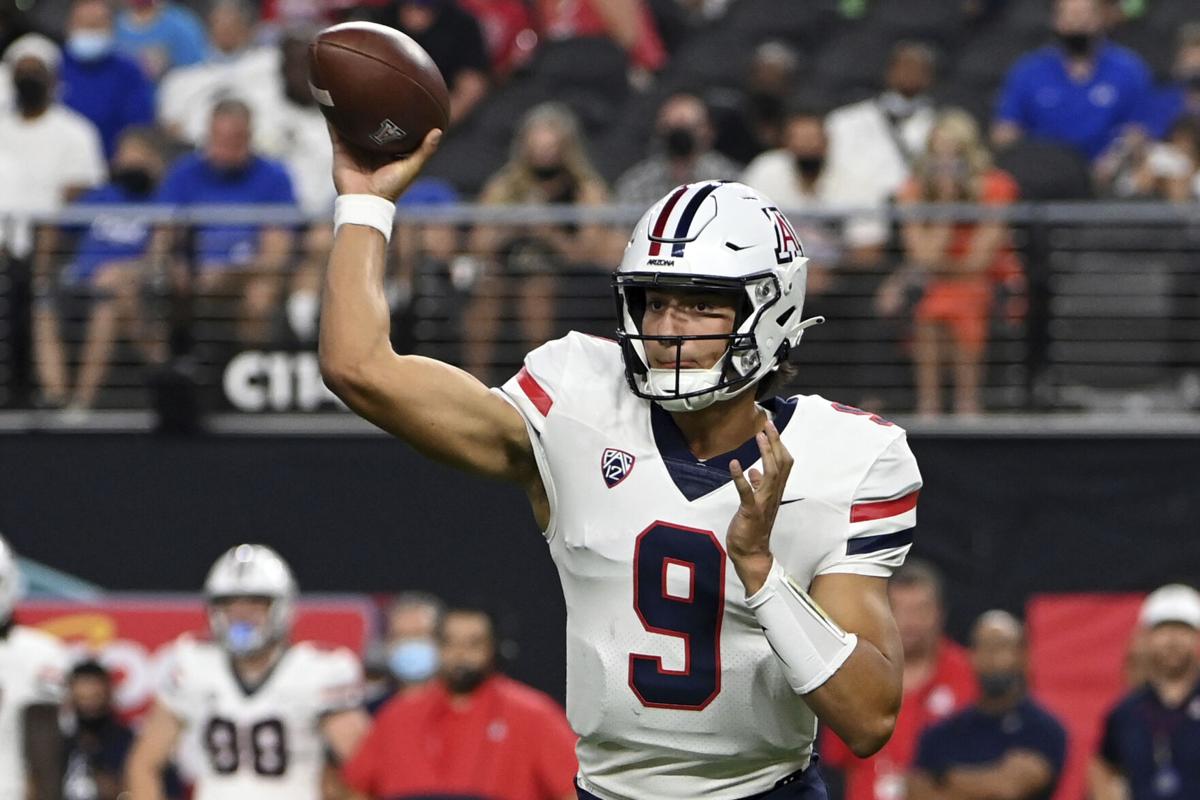