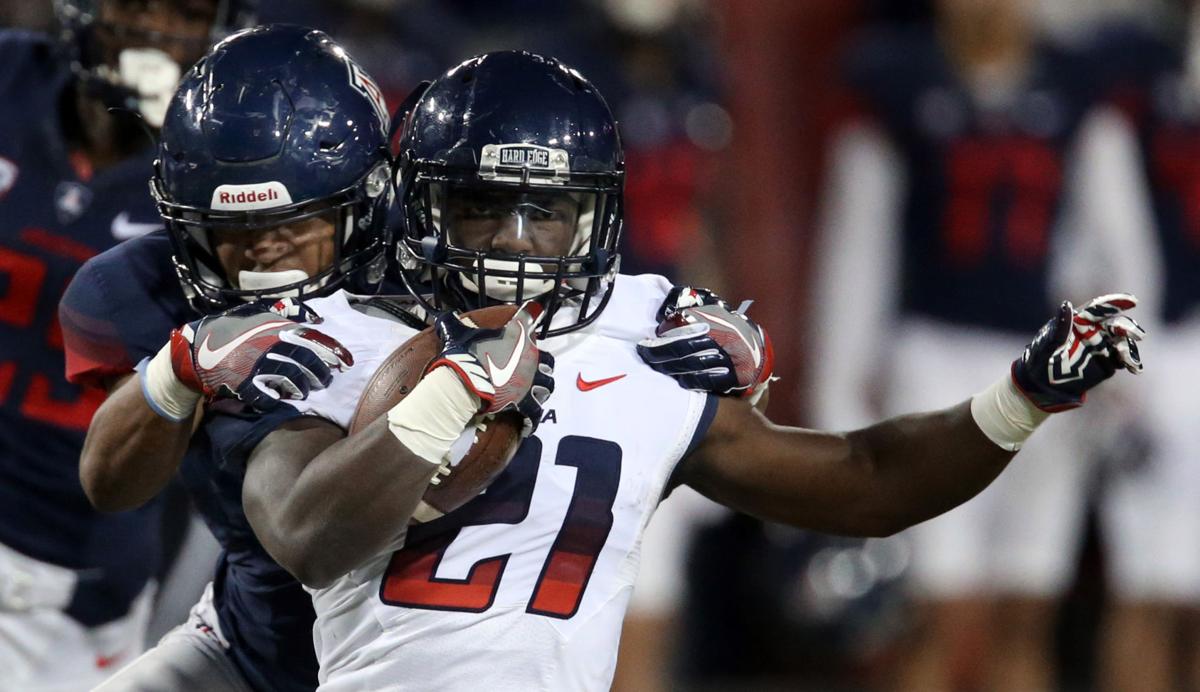 Rich Rodriguez said he wished the Wildcats’ defense was more effective against running back J.J. Taylor during the Spring Showcase on Thursday. 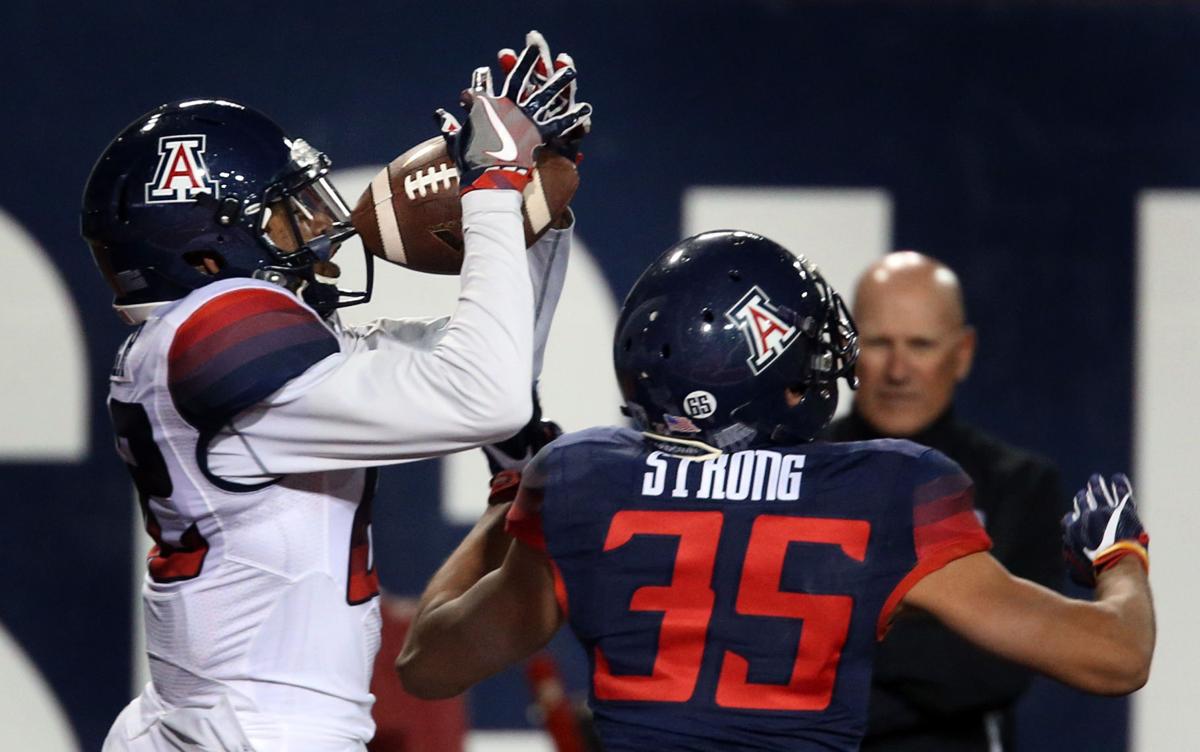 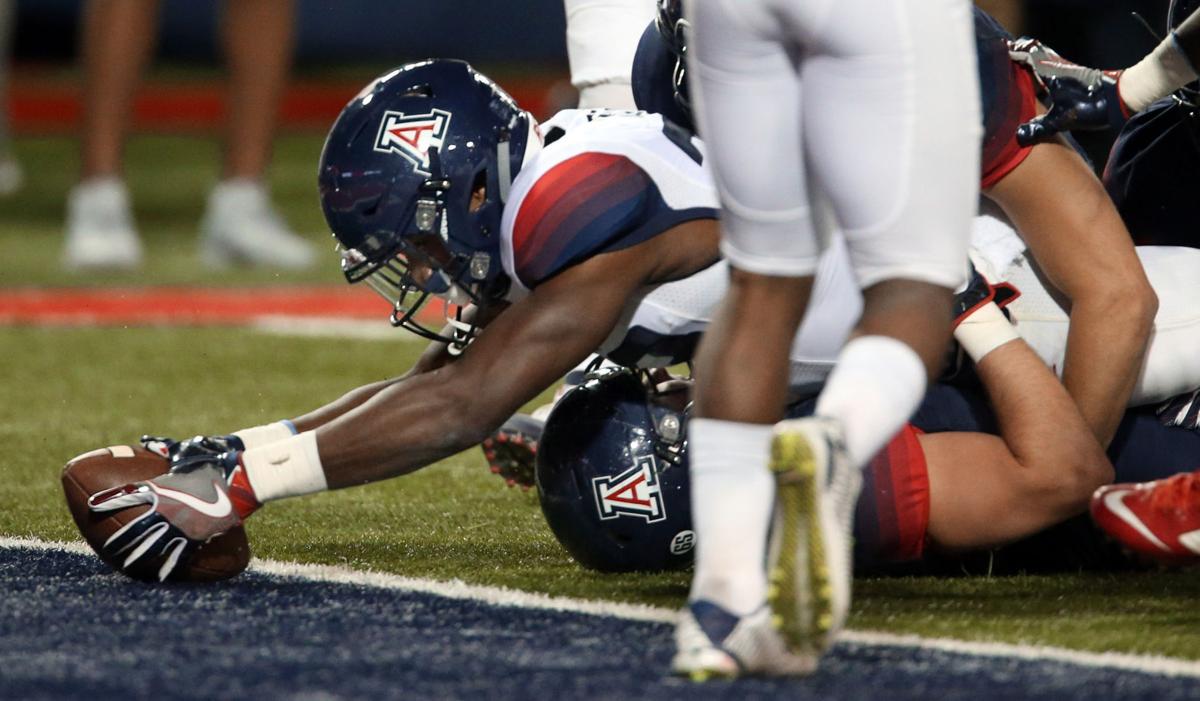 Arizona freshman running back Nathan Tilford worms his way through the scrum to pop out and get the ball across the goal line for a score Thursday night.

If this is what J.J. Taylor looks like at 80 percent, it’s scary to think how effective he’ll be when he’s fully functional.

The redshirt freshman running back was the star of the Arizona Wildcats’ “Spring Showcase” at Arizona Stadium on Thursday night, even though he still isn’t all the way back from the broken ankle that shelved him last season.

After darting through the UA defense on multiple occasions — and looking like the fastest man on the field — Taylor insisted he’s still at about 80 percent. He gave the same self-assessment earlier in spring camp.

To the untrained eye, Taylor appeared to be the same back who rushed for 265 yards in seven quarters against Hawaii and Washington. He ran inside and out, made defenders miss and popped back up after being taken down.

UA coach Rich Rodriguez considers Taylor a “special talent.” Still, Rodriguez would like to see the Wildcats’ defense do a better job of stopping him in spring practice.

Asked about Taylor being brought to the ground while still in the recovery phase from his injury, Rodriguez said: “I would prefer, defensively, that they take him to the ground quicker. It looked like they were taking him to the ground 30 yards down the field. He’s not in a red shirt, so he should have gotten tackled a little quicker. That’s probably easier said than done.”

Taylor said he hopes to be at full strength by the start of fall camp in August. The 5-foot-6-inch product of Corona, California, has added 20 pounds of muscle since arriving on campus, now weighing in at 180 pounds. He described Thursday night as “just another practice.”

“I just look at it as another chance to get better and to work on my craft,” Taylor said.

Rodriguez didn’t think the two-hour workout Thursday night was particularly sharp. It might have had something to do with the format, which was structured around Pac-12 Networks’ TV coverage.

“I think we had four other practices better than this one,” Rodriguez said. “This was almost a wasted day.”

Rodriguez lamented missed tackles, pass-protection breakdowns and some questionable decision-making by the quarterbacks. Khalil Tate threw an interception in a goal-line drill. Rodriguez also didn’t think the Wildcats were as physical as in previous practices.

“Out of 10, I’d say like, a seven,” cornerback Dane Cruikshank said when asked about the intensity level Thursday night. “We need to be at a 10 at all times to be a good defense or a good team. Period.

“But it’s still early. We’ve still got a lot more practices to go. We still have a lot of young guys that have to figure it out and know their role.”

Even though he would have competed with him for the starting job, Dawkins said he misses fellow quarterback Anu Solomon, who transferred to Baylor.

“I told him I got his back no matter what he does,” Dawkins said. “I hate to see him leave. Obviously he’s got to do what’s best for him. I wanted him here for the competition and the camaraderie. To have him around with all the experience over the last 2½, three years, it’s been immense. He’s taught me just about everything he knows.”

Arizona officially adds a quarterback to its 2017 class.

Jefferson, who has tremendous size and upside, was a four-star prospect in the class of 2015.

New Arizona Wildcats athletic director Dave Heeke meets with the media to discuss his new role at the UA.

Rich Rodriguez said he wished the Wildcats’ defense was more effective against running back J.J. Taylor during the Spring Showcase on Thursday.

Arizona freshman running back Nathan Tilford worms his way through the scrum to pop out and get the ball across the goal line for a score Thursday night.