UA defensive end JB Brown, right, on dealing with short fields in the last two games: “You control what you can control.” 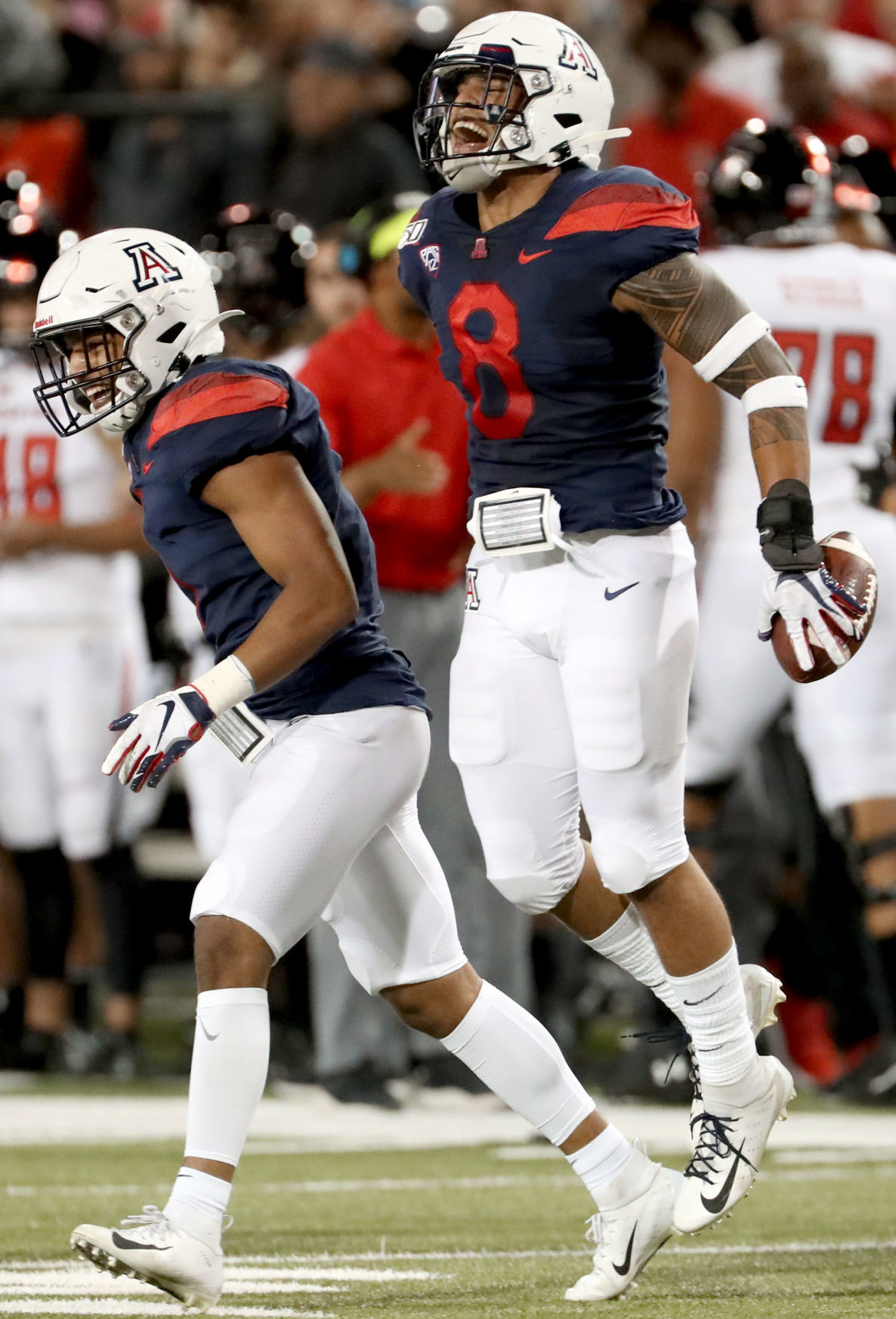 UA’s Anthony Pandy: “No matter what the score is, if you’re on the field, you should want to make plays, make highlights.”

Despite final scores that suggested otherwise, Arizona coach Kevin Sumlin generally had positive things to say about the Wildcats’ defensive performances the past two weeks.

Arizona was particularly sharp in the first half against Washington and USC, enduring turnovers and subpar play by the offense and special teams that repeatedly put the defense in precarious positions.

Sumlin went so far as to say those first-half defensive efforts were “good enough for us to win.”

Here’s the thing, though: The defense’s goal isn’t to put together a solid half of football. The unit strives to pitch complete games.

Are UA defenders pleased with those recent first halves? Sure. Are they satisfied with their overall execution? No way.

What does Brown see?

“A team that came out in the game fired up, had fun in the first half,” he said. “Second half, just not the same.”

Washington and USC each scored 17 points in the first half against Arizona – a respectable total given turnovers and field position (which we’ll detail in a little bit). They each averaged less than 5 yards per play.

The Huskies scored 38 points in the second half. The Trojans put up 24.

None of the three UA defenders who spoke to the media Tuesday believe they were fatigued. At least not physically. Whether they were worn down mentally is another matter.

The defensive players acknowledged a certain degree of frustration over having to defend short fields and carry the load for an offense that’s been sputtering. They also said the circumstances shouldn’t make a difference.

“You control what you can control,” Brown said. “I can’t get mad at what happened. I know my job is to not let them get into the end zone. That’s all I can harp on.”

Only twice in those seven short-field situations did the UA defense surrender a touchdown. Four of the others ended in field goals. Arizona also stopped Washington once on downs.

“We started slow (on offense). We need to be better, being able to move the ball offensively, if not scoring (then) playing the field-position game, like we did early in the year. All that works together.

“You add turnovers to that, I don’t know what else they could have done in the first half.”

Defensive end Jalen Harris would like to see the Wildcats sustain that shutdown mentality for four quarters.

“We think we can cool off because we’ve been doing so well,” the redshirt sophomore said. “I think we need to change the attitude. We need to step on people’s throat. Once we have them down and we’re performing and getting them off the field, we need to keep doing that.”

The irony of the past two games is that Arizona did shut down the opposition in the fourth quarter in the previous three contests. The UA allowed just three final-period points – total – against Texas Tech, UCLA and Colorado.

One difference between those games and the last two: They were competitive until the very end. The UW and USC games weren’t.

The Wildcats trailed the Red Raiders 14-13 entering the final period. They trailed the Bruins 17-13. They led the Buffaloes 28-27.

The Cats trailed the Huskies by just seven points early in the fourth quarter. But a quick UW touchdown, a three-and-out and another TD turned the game into a rout.

The defense had every reason to feel dispirited. The players said they can’t let that happen.

“No matter what the score is,” junior linebacker Anthony Pandy said, “if you’re on the field, you should want to make plays, make highlights.”

“You gotta do it for the love of the game,” Harris said. “It doesn’t matter the score. You should still be doing your job and continue to play hard.”

Brown, the vocal leader of the defensive line, constantly tries to “rally up” his teammates. His message in situations like the past two games is simple: There’s always something to play for.

“It’s still on film,” Brown said. “People are still watching this. You never want to put bad tape out there.”

Brown registered his first sack of the season against the Trojans. It wasn’t a product of any fancy moves. Rather, Brown said, it was an “effort play.” He learned a valuable lesson from it – one that can be applied to the entire defense.

“I feel like when I’m out there I give the maximum effort,” Brown said. “But when you see a play like that, it’s like, I know I can always be doing more.

“There’s always more we could do. We had a great first half, but did we score? Did we create that many turnovers? That’s how we’re going to play it.”

Costello, who has missed the past three games because of a thumb injury and one earlier contest because of a concussion, was expected to be a partial participant in Tuesday’s practice. Mills (calf) was not expected to practice.

With neither player available last week, redshirt freshman Jack West made his first career start. He completed 15 of 32 passes for 143 yards in a 34-16 loss to UCLA.

The Cardinal lost veteran placekicker Jet Toner for the season because of a leg injury suffered against the Bruins. Toner had made 12 of 16 field goal attempts this season and 47 of 57 for his career.

Arizona kept the damage to a minimum despite repeatedly having to defend short fields against Washington and USC:

‘More than just the quarterbacks need to be addressed,’ UA coach Kevin Sumlin says of the Cats’ slumping offense.

TEMPE — The Cardinals’ offense is still trying to find its way after a day of taking bite-sized yardage chunks just outside the Big Apple.

How negative-yardage plays have hurt the Arizona Wildcats offense, especially on third down

Cats Stats: The UA offense has slumped of late, in part because of a rise in sacks allowed, which has impacted the unit’s productivity and functionality.

The Wildcast, Episode 220: Is Saturday a 'swing game' for the Arizona Wildcats against Stanford?

Here's what's been affecting the Cardinal, who host Arizona on Saturday afternoon.

What to watch for when the Arizona Wildcats visit Stanford at 12:30 p.m. today

Three things to keep an eye on when the Cats face the Cardinal at Stanford Stadium.

Arizona and Stanford have been nearly dead-even in football over the years, and the numbers prove it

Quick hits about the Arizona-Stanford all-time football series, which will be continued today.

UA defensive end JB Brown, right, on dealing with short fields in the last two games: “You control what you can control.”

UA’s Anthony Pandy: “No matter what the score is, if you’re on the field, you should want to make plays, make highlights.”