More than 20 minutes after the final whistle, the chants still could be heard bouncing off the concrete holding up Arizona Stadium.

After years of misery, season upon season of disappointment, the Arizona Wildcats finally gave their fans something to celebrate.

Arizona withstood a pair of rallies, forged a comeback of its own and held on for dear life in a heart-stopping Territorial Cup matchup Friday afternoon. The UA survived, defeating Arizona State 38-35 in front of an announced crowd of 49,865 – many of whom stormed the field after the game.

“Just the emotions from the past few years and the results that we had, this one feels good,” said Wiley, who had 265 total yards. “Especially to win it at home. It feels good to get the Cup back here. And in the future, it’s gotta stay here.”

The Wildcats ended a five-game losing streak against the Sun Devils, claiming the Territorial Cup for the first time since 2016. Arizona finished its second season under Jedd Fisch at 5-7, 3-6 in the Pac-12 – a four-win improvement over 2021.

The Territorial Cup itself, lost somewhere in the mass of bodies on the field after the game, finally made its way to Fisch in the tunnel outside the locker room. He smiled and held it aloft, his white shirt sopping with green Powerade, before passing it around to the players.

“In the end, credit to our players. Players win,” Fisch said. “It was a great feeling in that locker room. Our players deserve that victory, and they’ve earned it with how hard they worked.”

ASU fell to 3-9, 2-7 despite a heroic effort from quarterback Trenton Bourguet. The Marana High School product threw for 376 yards and three touchdowns.

The heated rivals went back and forth in the second half, trading scores and exchanging blows. The Wildcats finally registered a knockdown late in the fourth quarter. Manu and Jalen Harris sandwiched Bourguet, forcing him to fumble. Tiaoalii Savea scooped up the ball, and the Cats took possession at the ASU 36.

But Arizona couldn’t run out the clock. The Sun Devils stuffed Wiley, who missed much of the fourth quarter because of cramps, on fourth-and-1.

ASU had one last shot. Manu – the undersized, under-recruited linebacker who began the season on the scout team – got to Bourguet again. Manu hit Bourguet’s arm as he threw the ball. Isaiah Taylor made a diving interception to seal the victory.

Members of both teams flooded the field after the play, and multiple players were ejected.

It didn’t matter in the end. Jayden de Laura took two knees, and the victory was secured.

“I’ve been here for a long time, and I haven’t won one,” said Harris, a sixth-year senior and the son of two former UA athletes. “The last time it was the year before I got here. So that’s a big one for me, especially it being my last game. That was one I felt like we needed. It’s exciting.”

ASU led 14-10 through the first 30 minutes, which were just a prelude to a wild second half that featured 49 points and five lead changes.

Arizona took the lead, 17-14, on a 9-yard touchdown run by Jonah Coleman. ASU responded with a 9-yard TD pass from Bourguet to Gio Sanders, who had eight catches for 120 yards.

The Wildcats answered with Wiley’s second TD run, a 12-yarder that capped a three-play, 75-yard fastbreak of a possession. Arizona then got a rare stop.

As running back Tevin White fought for extra yardage just outside the red zone, safety Jaxen Turner ripped the ball out of his hands. It was Turner’s second takeaway of the day. Arizona forced a season-high five turnovers.

But Bourguet and the Sun Devils weren’t done. They went 74 yards in eight plays. Xazavian Valladay’s 1-yard TD run made it 31-28 with one second left in the third quarter. The teams combined for 429 yards of offense in the period.

Arizona began the fourth quarter with a three-and-out — a killer in a game in which each team was struggling mightily to stop the other.

ASU recaptured the lead, 35-31, on Bourguet’s 4-yard touchdown pass to a wide-open Jalin Conyers with 11:04 remaining. It was the second time in the game that the Sun Devils had overcome a 10-point deficit.

The Wildcats answered. Wiley began the drive with a 30-yard reception. DJ Williams finished it with a 6-yard touchdown run to make it 38-35 with 8:53 to play.

ASU’s last two possessions ended with turnovers. Manu was involved in both. He wasn’t expected to contribute as much as he did as a freshman, but Manu proved to be a relentless force.

“He worked his butt off,” said fellow linebacker Jerry Roberts, who had a game-high 11 tackles. “He did a heck of a job on scout team. Coach (Johnny) Nansen gave him a shot. Ever since then, he just took off and balled.”

Veering from their usual pass-first approach, the Cats came out running on their first possession. Wiley gained 22 yards on a direct snap. Three plays later, he sprinted through a hole on the right side for a 51-yard touchdown to give Arizona a 7-0 lead.

ASU turned the ball over twice in the first quarter, but those takeaways led to only three points.

The Wildcats converted two third downs to advance to the 7, where the drive stalled. Tyler Loop’s 29-yard field goal bumped the lead to 10-0 less than a minute into the second quarter.

Arizona again advanced inside the 10-yard line on the subsequent possession but couldn’t come away with points.

On first-and-goal from the 5, linebacker Kyle Soelle tipped de Laura’s pass to the right side. Ro Torrence intercepted it in the end zone. Fisch dubbed the play “one of the worst play calls in Territorial Cup history.”

The Sun Devils then drove 80 yards in 15 plays, finishing the drive with a 4-yard TD pass from Bourguet to Elijhah Badger with 58 seconds to play in the half.

Arizona made enormous strides in Year 2 under Fisch. He viewed Friday’s win as just the next stop in an ongoing process – the next step toward something bigger and better.

“The season ended, and we felt like going into the offseason we had a chance to do some really special things. We brought some really good players in here, and the players that stayed were committed to getting better.

“But ... the build is still to build. The build isn’t changing. We want to get better. We want to bring in more players, better players and keep building off of what we did.”

Guard Josh Donovan, one of 18 players who participated in the pregame Senior Day ceremony, returned to the starting lineup after coming off the bench the previous four games.

ASU center Ben Scott returned to the lineup after sitting out last week vs. Oregon State.

Notes and observations from warmups before the annual Territorial Cup matchup between the Wildcats and Sun Devils at Arizona Stadium (Friday, 1 p.m., FS1).

Greg Hansen: Regardless of their records, UA-ASU rivalry is the Pac-12's best

For subscribers: The UA-ASU rivalry goes 24/7, all week, all month, all year.

Salpointe Catholic and Marana are eliminated on the road in the quarterfinals Friday night.

Does rebuilding Arizona have to defeat ASU for 2022 to be deemed a success?

The Wildcats already have surpassed expectations in Year 2 under Jedd Fisch; a win over the Sun Devils would make this season an undeniable triumph.

The Star's longtime columnist asks (and answers) the big questions ahead of Friday's rivalry game at Arizona Stadium.

News and notes from Arizona's Territorial Cup win over ASU.

Greg Hansen: Wildcats freshman is the Manu want with Territorial Cup on the line

Twice in the fourth quarter — game on the line, season on the line, everything on the line in the Territorial Cup — an even more undersized, under-the-radar player stole the stage from ASU Trenton Bourguet.

CDO dominates second half, rolls into Class 4A state semifinals

Dorados score all of their points in the final two quarters to thump visiting Phoenix Thunderbird 28-3 on Friday night.

Notes, quotes and stats from the Arizona Wildcats’ 38-35 victory over Arizona State

Pertinent factoids, words and numbers from the Wildcats' season-ending Territorial Cup triumph over the Sun Devils.

Charlie Ragle and Vince Amey, who coached at Arizona under Rich Rodriguez, are set to join Kenny Dillingham's staff at Arizona State.

Arizona coach Jedd Fisch is pleased with the program’s progress but continues to stress patience; plus: the Wildcats’ personnel outlook entering the offseason. 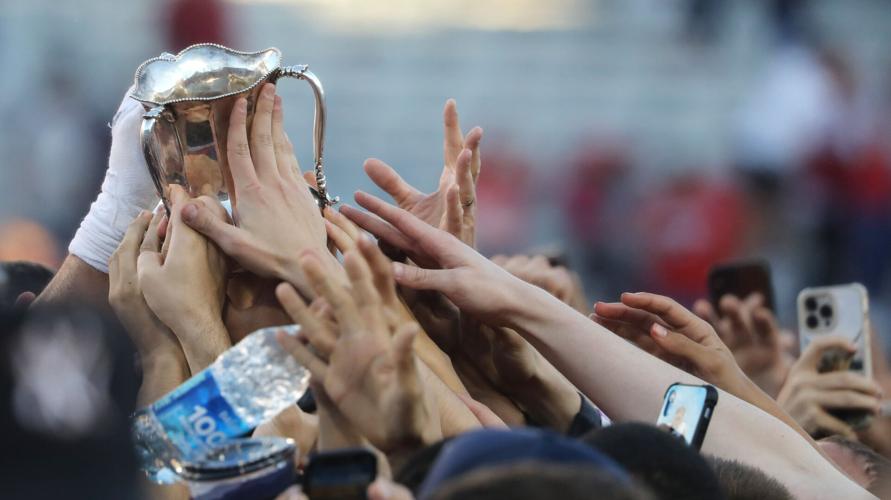 Fans and players try to get their hands on the Territorial Cup after Arizona defeated Arizona State to win Saturday’s rivalry game at Arizona Stadium. 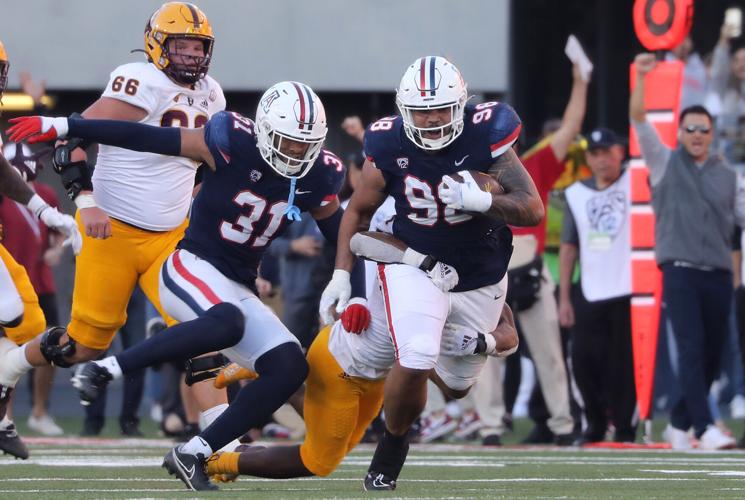 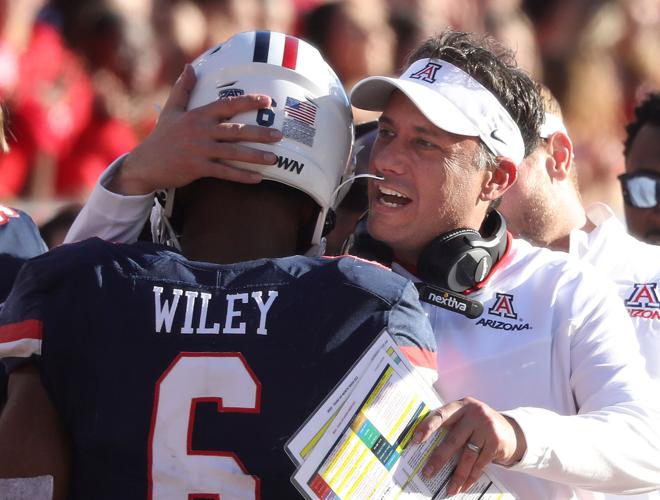 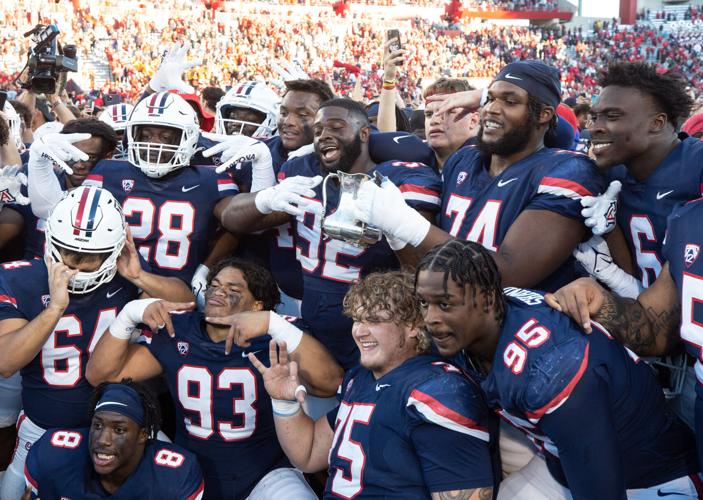 Arizona players pass around the Territorial Cup after defeating ASU, 38-35.