To halt their losing streak, Arizona Wildcats have to stop the run (or at least slow it down)
Share this
Michael Lev

Arizona’s defense has improved overall under first-year coordinator Don Brown. The Wildcats rank fourth in the Pac-12 in yards allowed per game. They haven’t finished a season in the top half of the conference since 2010.

But that doesn’t tell the full story.

Arizona is still struggling to stop the run. The Wildcats rank 11th in the league and 122nd nationally, allowing 219.4 yards per game. They ranked last in the Pac-12 each of the previous two seasons.

UCLA rushed for 329 yards against Arizona last week. It was the most yards the Wildcats had allowed on the ground since last year’s game against Colorado. And guess who Arizona is facing this week?

The Buffaloes accumulated 407 yards rushing against the Wildcats last season — the Buffs’ highest output since 2002. Jarek Broussard had 301 of those yards. Broussard went on to be named Pac-12 Offensive Player of the Year. He probably should have thanked Arizona in his acceptance speech.

Broussard has yet to rush for 100 yards in a game this season for a scuffling Colorado offense. Nonetheless, he and his fellow rushers will be the focal point for the UA defense.

“I’m pretty sure they’re gonna come into the game thinking they can run the ball again effectively,” Arizona safety Jaxen Turner said Tuesday. “I’m pretty sure our game plan is going to (counter) that.”

Whether the Wildcats can execute it remains to be seen. In general, Brown has been pleased with the defense’s progress. But the unit is still experiencing a learning curve, he said.

“We’ve been at this now for eight-plus, almost nine months,” Brown said. “Schematically, we throw a lot at the guys. We’re still making some critical errors.”

As an illustration of how much Brown is concentrating on fixing those problems, this was his response when asked about preparing for something unforeseen from Colorado, which is coming off a bye:

“We’re still in an area of learning that I’m more worried about us than I am the opponent. I’m being honest as a heart attack.”

The challenge for Arizona’s returning defensive players, especially the veterans, is picking up a new scheme for the second year in a row. If you include interim DC Chuck Cecil, the UA has had four defensive coordinators since October 2019.

“We’re still in a process,” Turner said. “But it’s getting there.”

Additionally, almost half of Arizona’s starting defenders are new to the program.

“So there’s a lot of change,” Brown said. “There’s a lot of learning to be done here. It just isn’t gonna get solved now. I’m not saying that makes excuses for being competitive.

If they can slow down the Buffaloes’ rushing attack, even a little, the Wildcats will greatly improve their odds of ending their 17-game losing streak. Colorado ranks 127th nationally in passing yards, averaging just 100.4 per game. The only teams below the Buffs are the three service academies, which run option offenses.

“That’s a big piece of it right there,” Brown said. “We gotta make sure we take care of it.”

Football coaches and players are quick to cite the mantra “next man up” when someone goes down. It’s the nature of the sport. You have to move on.

That’s easier said than done for the players who get hurt and can’t play for weeks or even months. Arizona lost quarterback Jordan McCloud to season-ending knee and ankle injuries suffered in the fourth quarter vs. UCLA.

“Jordan’s a friend of mine,” Turner said. “I hang out with Jordan. I know what he’s gone through. He didn’t start the first three games. He played two games and got hurt. It’s unfortunate. I know God got him.”

Offensive coordinator Brennan Carroll said McCloud seemed to be in good spirits in the aftermath of the injury. Asked how McCloud was handling it, Carroll said: “Like a stud. He’s been great. He’s engaged. He’s up here. He’s got the game plan for this next week, (despite) knowing that he’s not going. He just wants to help this team win.”

McCloud’s injury thrusts Gunner Cruz back into the starting lineup. He began the season as the Wildcats’ starter before losing the job after two games.

If he fails to keep it this time, it won’t be from a lack of hard work.

“I know Gunner’s gonna be ready for the situation,” Turner said. “He’s here day and night. I’m with him, and I trust him.”

Carroll said two additional factors could help Cruz succeed. One is that he knows he’s the starter and that he’ll get almost all of the first-team practice reps; that wasn’t the case the first time around. Second, Cruz got a chance to watch from the sideline for most of the past three games. That seemed to help McCloud before he got his chance to play.

“When you get to take a step back from having to be the guy, you’ve got time to reflect on what you would have liked to have done better, what you think you could have handled better,” Carroll said. “(Now) it’s about time to see what he can do.”

Brown on second-year freshman Paris Shand, who has become the first defensive lineman off the bench: “He’s athletic for a big guy (6-5, 281). He runs well. He’s got a lot of football left in front of him. But just the root athlete, the raw athlete, you gotta be excited about his ability.”

Aside from two plays, Brown said he would give a “winning grade” to second-year cornerback Treydan Stukes, who made his first career start against UCLA. The two plays were a coverage assignment in the end zone and a missed tackle.

Brown when asked how often Arizona deploys extra defenders near the line of scrimmage: “We’re an eight-man box a lot. We’re doing everything we can, within reason, to have enough guys in the box. ... I can’t put anybody else in there, unless you want me to get in there.”

Colorado’s Max Wray, who has started two games at left tackle, has returned to practice on a limited basis after being in the concussion protocol. He could return to the lineup Saturday.

‘I believe in Gunner’: Arizona pivots back to QB Cruz with Jordan McCloud out for the year

Cruz, who began the season as the Wildcats’ starter, has regained the job after McCloud suffered season-ending injuries vs. UCLA.

Brown was held out of last week's UCLA game due to personal issues and could return to the Wildcats in 2022. 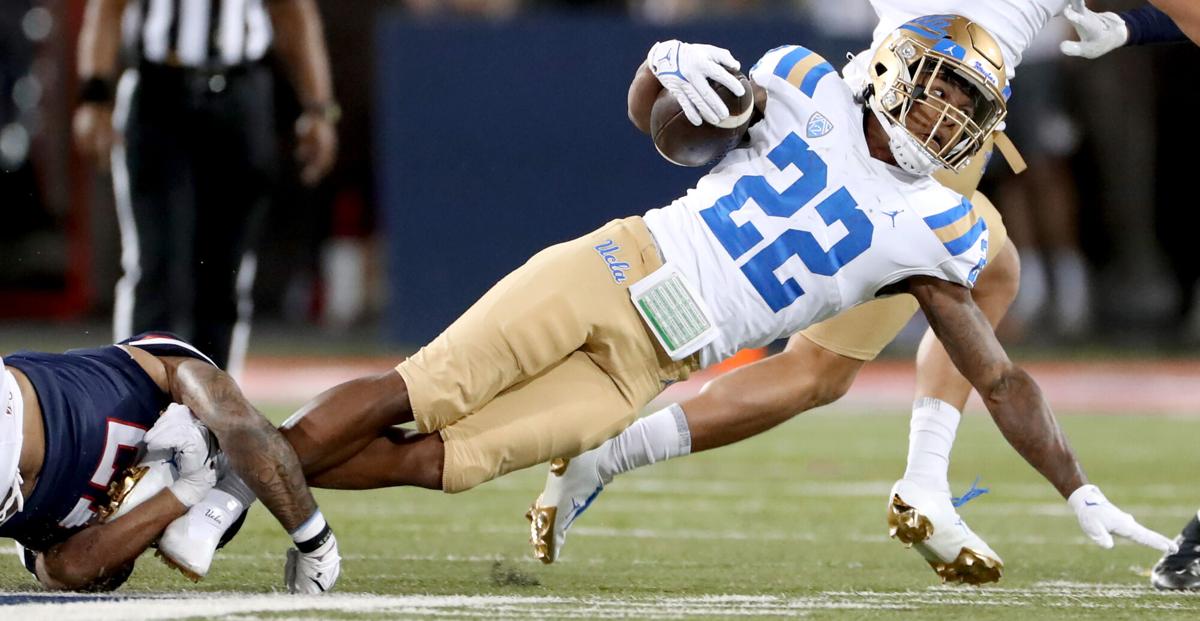 Arizona safety Jaxen Turner manages to hang on and bring down UCLA running back Keegan Jones in the fourth quarter of Saturday's game. 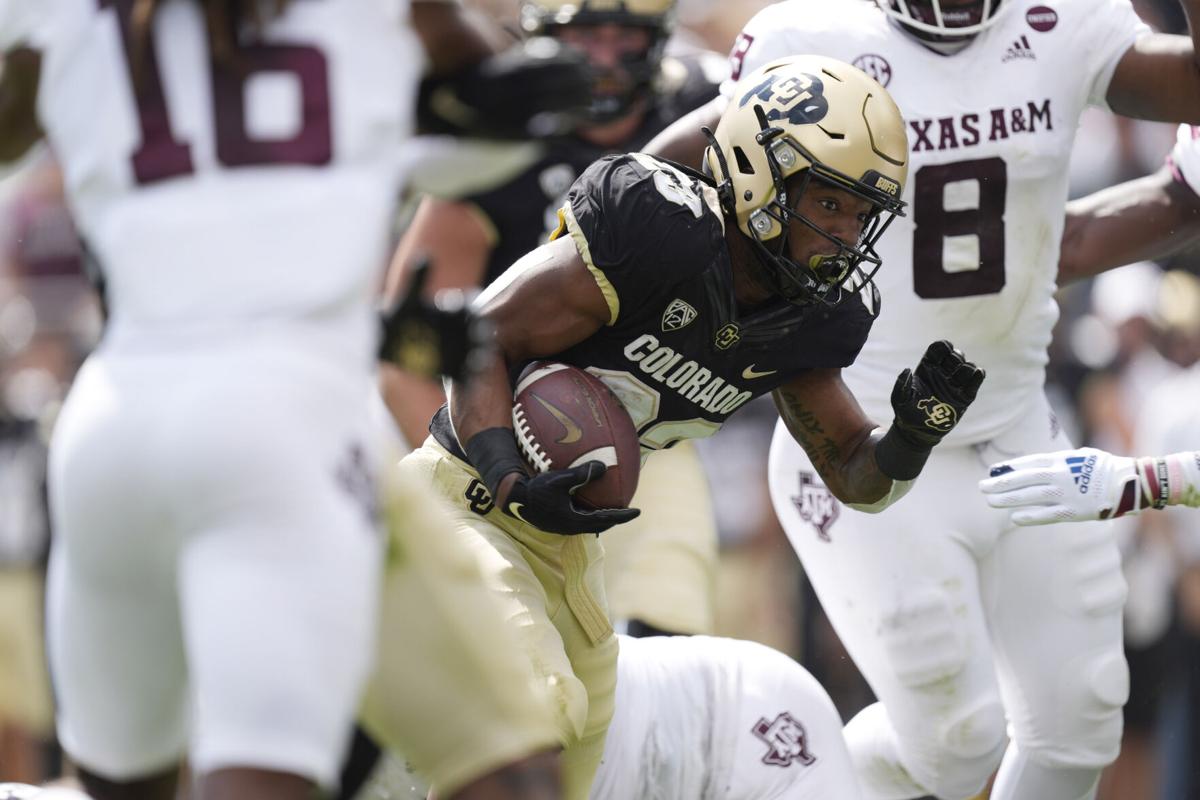 Colorado running back Jarek Broussard runs for a short gain against Texas A&M during the teams' Sept. 11 game.