You won’t hear Dylan Klumph complain about the heat in Tucson.

“Punting weather,” the new Wildcats punter proclaimed when asked Saturday why he transferred to Arizona.

If you execute properly, Tucson should be a punter’s paradise. The city’s elevation is about 2,390 feet. Once monsoon season ends, the air is dry.

Contrast that with Klumph’s former digs: Berkeley, California. Berkeley is basically at sea level (171 feet). The air is often moist and heavy.

Still, Klumph averaged 43.92 yards per punt for Cal, just a fraction less than the school record of 43.96. He is expected to be an upgrade at the position for the Wildcats, no matter where they play.

“He’s a veteran,” special-teams coordinator Jeremy Springer said. “He’s played in the Pac-12 before. He’s kicked in tough games, tough-weather games. He brings that different dynamic that maybe some other guys don’t have.”

Springer and Klumph spoke to reporters about 45 minutes after the team’s Saturday scrimmage. The punters and snappers spent about a half-hour working on their craft after practice.

Klumph hasn’t definitively won the job yet. He’s still competing with Jake Glatting and Matt Aragon. After arriving a week late to camp while waiting for summer grades to be posted, Klumph said he isn’t quite “game ready.”

But he was brought here as a graduate transfer to be the No. 1 punter, and it seems like only a matter of time before that becomes official. Klumph expects to be a key contributor.

“Punting can make or break a team,” the fifth-year senior said. “Hopefully I can set up the defense the best I can and give them the most room to play with.

“Flipping the field is a huge thing. It’s a momentum changer too, as everyone knows. It’s hard to march 95 yards.”

The Wildcats and their fans know. Arizona finished last in the Pac-12 in gross and net punting average last season. The entire operation was troublesome at times. Long snapper Nick Reinhardt missed the season because of a knee injury. On multiple occasions, UA punters had trouble handling snaps.

Springer was determined to raise the competition level at the position. He knew about Klumph through connections in the small world of kicking and punting.

Klumph was on track to graduate in May. He also was looking for a change of scenery. After initially blocking him from transferring within the Pac-12, Cal gave Klumph his full release in January. On Feb. 9, he announced he was coming to Arizona.

“I’m glad I came here,” Klumph said. “This place right now is probably the best school in the country to set me up punting-wise.”

Klumph has NFL aspirations. He’s a pro-style punter with a powerful leg.

“He does have NFL potential,” said Mike McCabe, the founder of One On One Kicking, where Klumph and numerous college and pro kickers and punters train in the offseason. “He’s very good at directional punts.”

Distance isn’t everything. Klumph said it feels as if the conditions in Tucson add 10-plus yards to his punts, but punting is a situational discipline. As McCabe said, regarding Tucson’s elevation: “It may give you a little hang time, but it’s not going to matter. It’s where you place the ball on the field.”

Klumph had net averages of 37.6 and 38.4 yards the past two seasons — significantly higher than Arizona’s mark of 29.4 last year. His goal is to consistently boot the ball 45 yards with 4.5 seconds of hang time. Every scenario is different, however.

“You need to be a student of the game,” said Klumph, a pre-law major at Cal who’s pursuing a master’s degree in education leadership at the UA. “Who’s the returner? Where’s he going to go? Where are you at on the field? What does the team need? Do they need a 60-yard ball? Or do they just need to get the hand in the air (for a fair catch)?

“You’ve really got to know exactly what you’re doing.”

Klumph began his prep career as a middle linebacker at Crespi High School in Encino, California. But a foot injury prompted a position change.

Klumph had played soccer since he was a youth, and no one kicked the ball farther at Crespi’s kicker tryout. The more he did it, the more he enjoyed it.

Klumph made his UA practice debut two Fridays ago. He punted on his own while waiting to be cleared — “It’s a little boring,” he said, “but you gotta do what you gotta do” — and unleashed a bomb at the start of Arizona’s scrimmage the next day. Wildcats coach Kevin Sumlin remarked that “it just sounds different” when Klumph catches one cleanly.

“When you hit a sweet spot with a golf ball, you know that ball’s absolutely crushed. There’s a smile on your face,” Klumph said. “The same with punting. When you hit that ball in a perfect spot, you know it’s going to go.”

Prepare for the 2018 Arizona Wildcats season with the Star's annual preseason guide.

After ’17 ended with a thud, UA ‘Stud’ Kylan Wilborn determined to finish stronger

The sophomore has strengthened his body and mind after fading over the second half of his freshman campaign.

The sophomore tailback appears to have worked his way into a timeshare with J.J. Taylor; plus an update on the backup QB situation.

The junior quarterback talks to the Tucson media for the first time since spring.

Rich Rodriguez speaks: Former Arizona coach on missing the game, what might be next

The ex-Wildcats coach appears on a Phoenix radio station, his first media interview since being fired in January.

Sumlin and his staff have three weeks to settle on lineups and rotations before BYU arrives for the opener.

Improving against the run is Marcel Yates’ top priority entering a pivotal season for the third-year defensive coordinator.

5 observations from the Arizona Wildcats’ first practice of training camp

Who and what stood out during the first fall practice under Kevin Sumlin.

The University of Arizona is among the 'others receiving votes,' placing them 31st in the initial poll of 2018.

The former four-star recruit is hoping to be able to play this season for Arizona.

The UA defensive coordinator talks linebackers and other topics in a pre-BYU Q&A.

Sumlin and offensive coordinator Noel Mazzone are teaching the junior quarterback new skills, but they don’t want to drift too far from what he does best.

Breaking down Khalil Tate’s 9 interceptions from 2017: What can we learn?

Analyzing the Arizona quarterback's interceptions reveals a pattern: He gets in trouble when he tries to do too much.

Injuries and other issues have left the line short on experience and depth.

5 potential breakout players for the Arizona Wildcats in 2018

The group consists of two receivers, a tailback, a defensive tackle and a kicker. 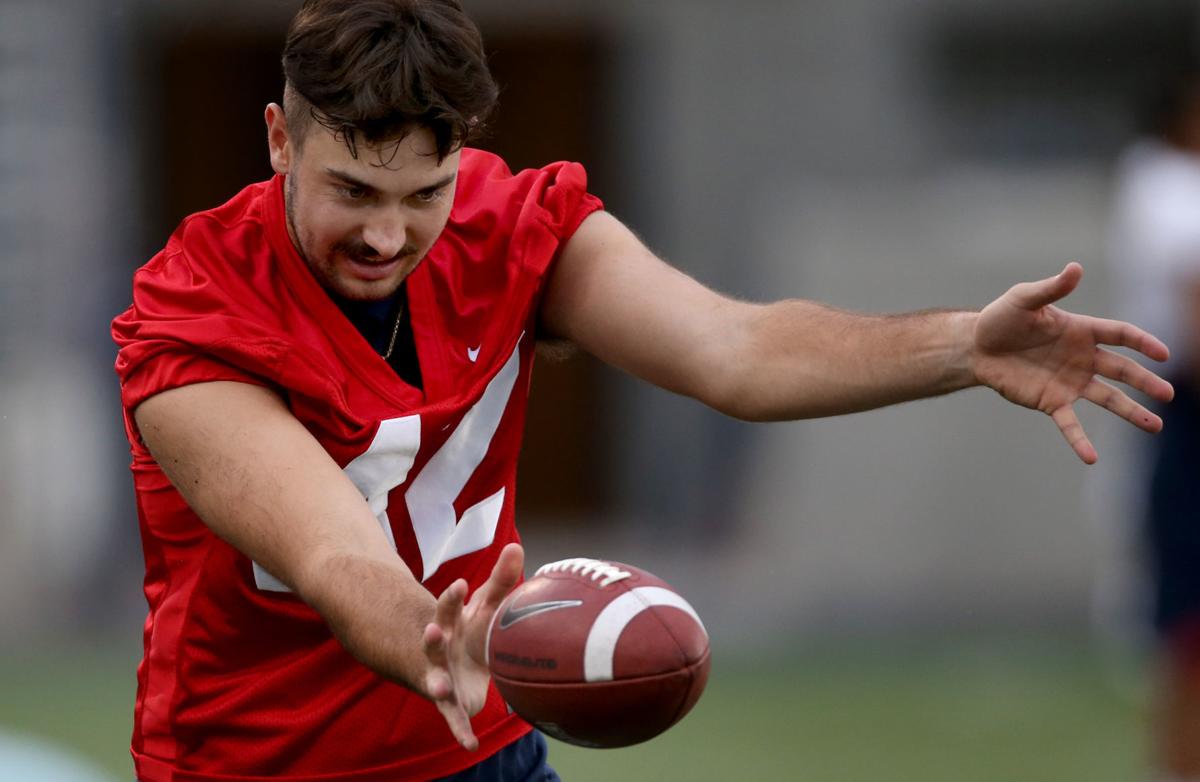 Punter Dylan Klumph hones his technique on the sidelines during Arizona’s practice Saturday. The grad transfer fell just shy of a Cal punting record last season, averaging 43.92 yards per punt. He expects the ball to fly even further in Tucson. 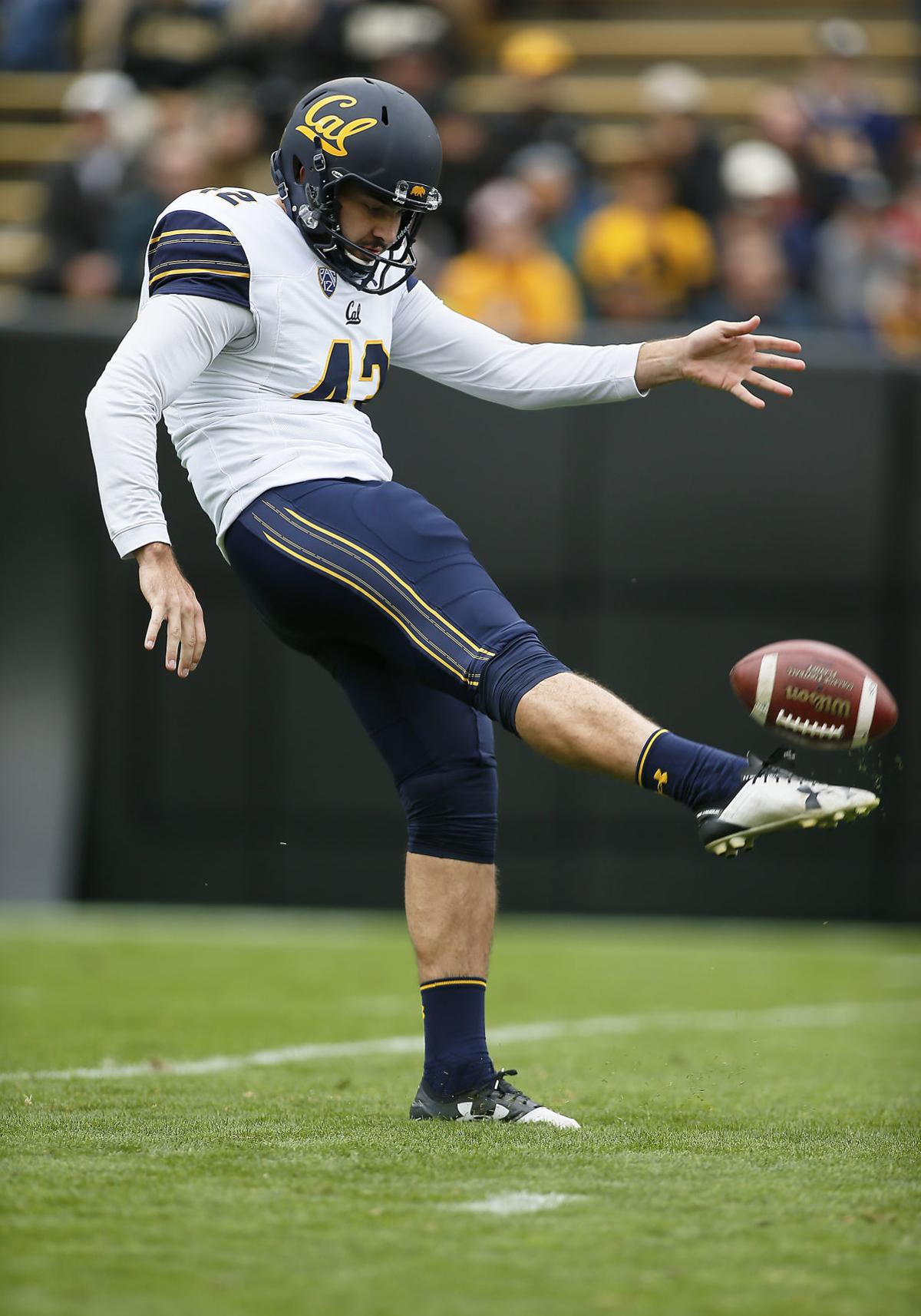 Dylan Klumph transferred from Cal after sustaining net averages of 37.6 and 38.4 yards the past two seasons. Arizona’s punters averaged a net of 29.4 yards per punt last year.