They are the displaced fans of the Arizona Wildcats — season-ticket holders and impassioned tailgaters whose plans have changed this fall.

They were supposed to be mingling at the UA Mall on Saturday and rooting for the Wildcats at Arizona Stadium. In the original version of the 2020 schedule — before the coronavirus pandemic altered life as we had known it — Arizona was to have hosted Stanford, most assuredly in a #Pac12AfterDark time slot. It would have been the third straight home game to open the ’20 campaign — the third straight opportunity for the diehards to hang out, see familiar faces and celebrate their shared and unshakable affinity for UA football.

Instead, they are waiting and hoping. They already have endured one false start — the all-Pac-12 schedule that was and then wasn’t. They understand why the games have been postponed. They aren’t happy about it. But they get it.

They are the displaced fans of the Arizona Wildcats, and these are some of their stories.

Alex Hubbard’s family has been there literally from the beginning.

Hubbard’s father, Al, helped build Arizona Stadium, which officially opened in 1929. The stadium workers had a choice: They could put some of the money they were owed toward tickets. Al Hubbard, who later would built custom homes in the Catalina Vista neighborhood, selected that option.

The season tickets Alex Hubbard now owns are marked as No. 2,356, although Alex insists his dad had to have been among the first 50 to invest. Regardless, for the past 70-plus years, Alex Hubbard has dutifully sat in his seat in section 22 and cheered for his beloved Wildcats.

Hubbard, 78, a retired paint-store owner, says he has missed only two games in his life. One time he misbehaved as a child; another time his father-in-law was ill.

Not even open-heart surgery in 1988 or major back surgery five years ago could prevent him from making the drive from North Phoenix with his family.

Hubbard was a big-time golfer back in the day, and he wanted to play the sport for the UA. But the coaching staff wouldn’t give him a scholarship. Another school would. So Hubbard and his friend attended — gulp — Arizona State. It didn’t stick.

He lasted one year at ASU. He then attended Phoenix College before deciding to join the Air National Guard. Hubbard took some business courses at the UA and made a career in paint.

Hubbard never stopped wearing the colors, and only a pandemic could prevent him from attending UA football games again this fall.

“I’m the eternal optimist,” he said. “They change their minds all the time. I’ll drink my coke out of a straw with a mask. I don’t care.”

Ted Downing is best known as a former member of the Arizona House of Representatives. He’s also an anthropologist and a research professor of social development at the UA. So it stands to reason that his son, Demitri, would know more about world culture than the typical tailgater.

As Demitri Downing sees it, that’s what tailgating is — a cultural activity. Nothing better symbolizes the melting pot that America is supposed to be. Never has America needed it more than now.

“I’ve been an active participant in UA tailgates since the ’90s, when I came to understand that what we were doing 6-7 times a year was one of the most culturally distinct, unifying events in the Tucson Valley,” Downing said. “Tens of thousands of men, women and children — Black, white, Mexican — would get together to celebrate life, celebrate the U of A, celebrate one of the most traditional sports in the U.S.

“The spirit of sharing is what we are about as people. Now more than ever, we need reminders of that.”

Downing, 47, was born in Tucson. He attended Boston University before going to law school at the UA. BU had football then (it dropped the sport in 1997), but it wasn’t the same.

“There was no building of community. This is a community builder. It’s a giant picnic for the community,” Downing said of the UA tailgate scene.

The tailgate Downing runs is among the most distinct on the Mall. Its hub is a red, convertible double-decker bus. After a multiyear search, he finally found one at a Tucson scrap yard. Friends helped him refurbish it. “Clifford” has been up and running since 2013 — until this year, anyway.

Downing wishes it weren’t so. He believes tailgating could happen if everyone wore masks. (In fact, in the early stages of the shutdown, Downing began making masks featuring the UA logo.) He acknowledges that the players are missing out on more than the fans. That said, it’s hard to put a value on an event that brings people together at a time when the country feels splintered.

“I’ll have Democrats and Republicans mingling freely,” said Downing, founder of the Tempe-based Marijuana Industry Trade Association. “There are no arguments. We’re all just Wildcats. We’re all Tucsonans.”

Page Repp joined forces with Downing about two years ago, merging their tailgates into one big party.

Repp, a multifaceted Tucson businessman, operates his portion of the tailgate out of a 1999 Georgie Boy Landau RV. It is adorned with those inflatable tube figures you’ll see on street corners, except in UA colors with the Block A logo.

Repp was a devoted fan as a UA student — “Unfortunately,” he said, “I was a face painter when I was in college” — but didn’t discover the tailgate scene until years later when he became a season-ticket holder.

“I always walked through the library. I didn’t even know tailgating existed,” Repp, 46, said. “I went out there the very first time, and I was blown away.”

What was so appealing about it?

“Everybody was so happy and excited,” Repp said. “You might run into somebody. It’s on grass. The sun is shining. You could walk around with a beer. There was nothing else like it. It was just so cool.”

Repp understands the Pac-12’s decision to postpone the season better than most. He is a co-founder and organizer of the Dusk Music Festival. He and his partners decided to cancel this year’s event, which had been scheduled for Nov. 14-15, because of safety concerns.

That same, sobering dose of reality hit him when the Pac-12 pulled the plug on Aug. 11.

“It’s a total bummer. I was looking through my pictures. A year ago, I was on the plane to Hawaii,” Repp said in late August.

The origin of the Tellez family tailgate’s name is delightfully obscure. They call themselves the “Rafter Cats.” It’s a spin on “Rafter Rats,” which was the nickname of a group of fans who sat high in the stands for Tucson Sky co-ed pro volleyball games in the late 1970s.

“When they started in the ’80s,” said their son, Daniel, “it was just a blanket that they put down right next to McKale.”

Now it’s a multi-tent, multi-family operation with an itinerary that undoubtedly will sound familiar to anyone who has tailgated on campus.

The Tellezes pack up their pickup trucks the night before the game. They pick up ice on the way and try to arrive about eight hours before kickoff. Then they line up to secure a spot.

The Tellezes sit in section 102. But for Daniel Tellez, the tailgate is the best part of the day. It’s a chance to see family members that the UA grad, 29, doesn’t often see.

“I have tried a couple of Zoom game hours, but socializing on Zoom is just incredibly hard,” said Tellez, who recently moved back to Tucson to study at the UA’s College of Pharmacy. “You can’t have those side conversations.”

Tellez recalled “a sense of inevitability” that the season would be halted because of the pandemic. His dad — who didn’t attend the UA but loved being part of a community event — was “definitely bummed out the most of everyone.”

“I think he’ll be a little sad,” Daniel said shortly before what was supposed to be the season opener on Aug. 29. “But I think that’ll pass.”

Season-ticket holder Steve Malina and his friends have a routine.

They’ll drive to Tucson from Phoenix, or take the Cat Cruiser, and arrive on campus about three hours before kickoff. Their first stop is University Boulevard — No Anchovies or Gentle Ben’s, depending on the crowds.

Malina then makes his way to the Mall to hang out at the Red Army tailgate. He’ll buy a T-shirt and “give the guy in charge 20 or 30 bucks to let us hang out there” — a contribution to cover a season’s worth of food and drinks that’s undoubtedly welcome but probably unnecessary. (Every tailgate host who spoke to the Star for this story said they gladly give away refreshments to whoever stops by.)

Malina and his friend Doug then return to University to drink a sake bomb at Fuku Sushi. They toast to friendship and the Wildcats. They end the toast by saying, “F— ASU!” One time last season, someone overheard them and bought them drinks.

“Stuff like that seems to happen every week or every other week,” Malina, 37, said.

Malina, an accountant, has had season tickets since the mid-2000s. He estimates that he has missed about a half-dozen games.

Malina met his future wife, Yvette, a fellow Wildcat, before a UA-ASU basketball game in Tempe in 2009.

You never know whom you might meet at a game. For the football season-ticket holders and tailgaters, though, it’s mostly about reconnecting with old friends. That’s what they’ll miss more than anything this fall.

“It’s definitely disappointing,” Malina said. “But I understand that there are far bigger concerns right now than attending a college football game.”

Across Pima County, 22,418 cases of coronavirus have now been confirmed, up 61 cases from the day before.

For Arizona Wildcats commit Clay Millen, quarterbacking is in his DNA

The younger of two QB-playing sons of former NFL passer Hugh Millen has an advanced understanding of the game.

The 2020 NFL season features nine players on active rosters with ties to either Tucson or the Arizona Wildcats. Here’s a breakdown of the ones that will be either playing or standing on the sidelines on Sunday:

D-backs drop another series with loss to visiting Seattle

Klassen, who was an assistant at Pima College, will be the women's head coach at D-III SUNY Canton in New York.

NCAA approves to give Election Day off for student-athletes

NCAA student-athletes will not participate in any athletic activities on Election Day.

Arizona football rewind: Cats’ win over No. 9 Iowa proved to be pinnacle of Mike Stoops era

In lieu of fall football, the Star will revisit noteworthy UofA games of the past until the 2020 season resumes.

A Q&A with the former Wildcats defensive end, who played an integral role in a program-defining moment and hopes to get one more shot to extend his NFL career.

Wilborn joins former Wildcats and classmates Tony Fields II, Colin Schooler and Scottie Young Jr. in departing from the program; all play on the defensive side of the ball. 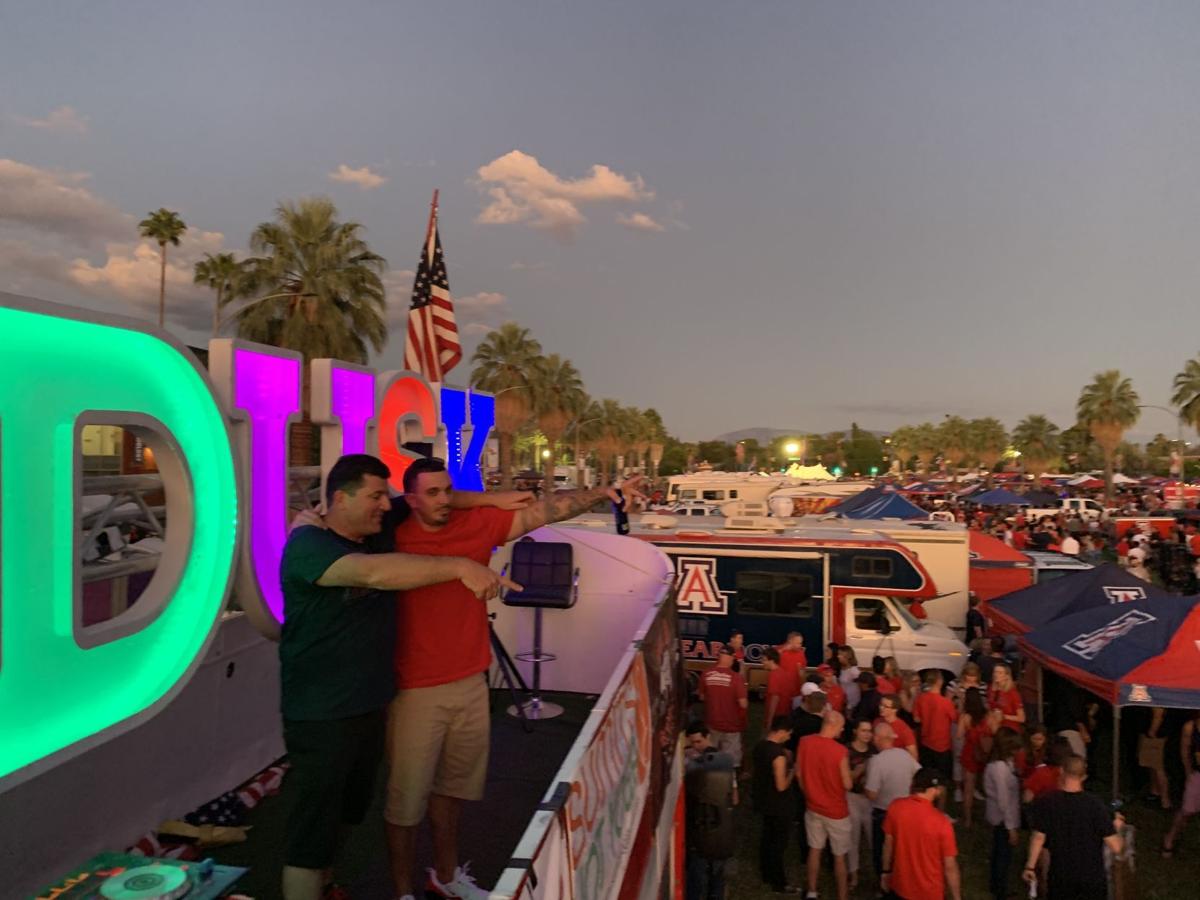 Page Repp, far left, understands why the Pac-12 is being cautious, but called it a “total bummer.” 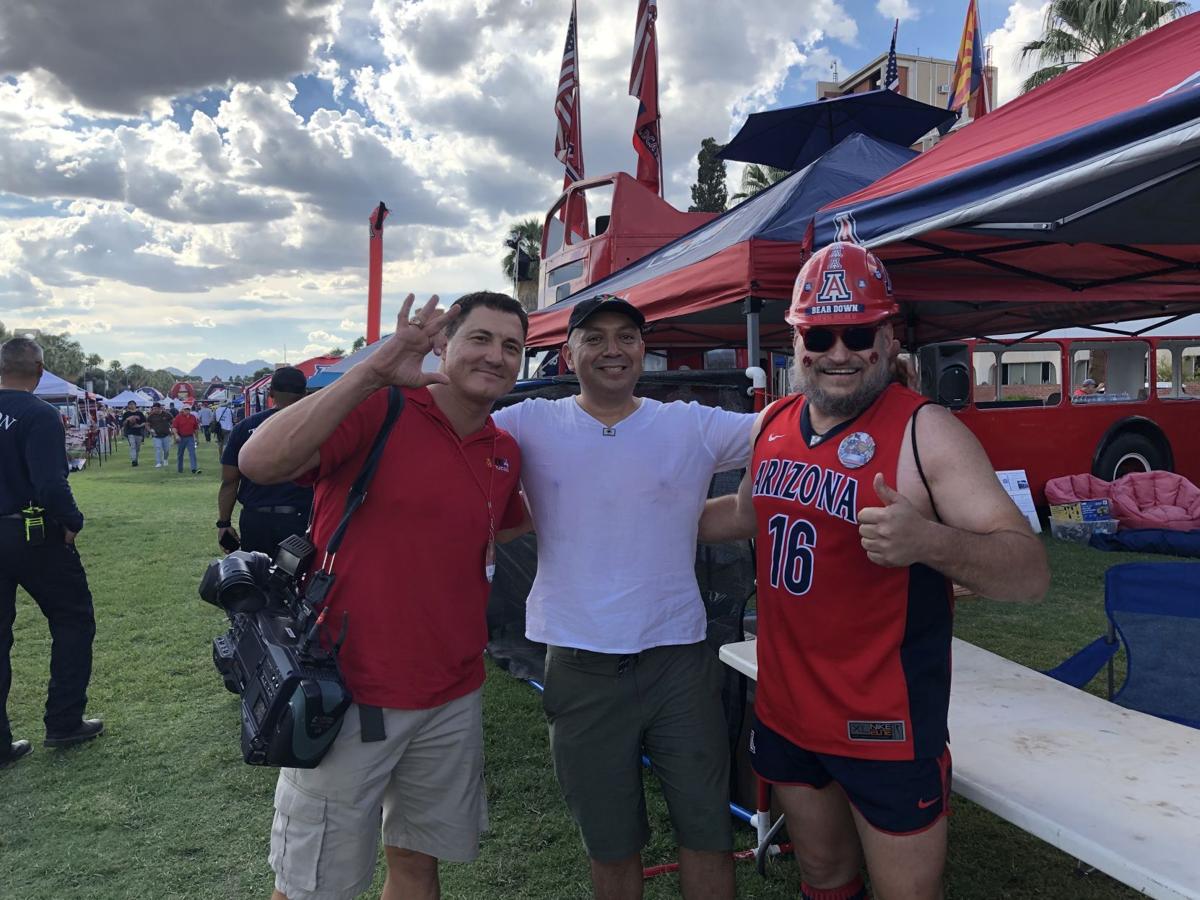 Demitri Downing, in white, puts on one of the most distinctive tailgates on the UA mall.