First-year Arizona coach Jedd Fisch put it in terms he knew his players would understand.

The end of spring football on April 24 signaled halftime for the Wildcats. The strength-and-conditioning program that preceded it represented the first quarter. Spring ball was the second quarter. The S&C training that’s upcoming is the third quarter. Training camp is the fourth.

In other words, the Cats still have a long way to go.

The same could be said about a critical decision Fisch and his staff must make before the Sept. 4 opener against BYU in Las Vegas. That decision is the focal point of the first of three lingering questions we’re exploring about UA football now that spring ball is over and summer is approaching:

Is Arizona any closer to figuring out who its starting quarterback will be?

Based on practice deployments and the expectations for incoming transfers, we have a pretty good idea who the Wildcats’ other 21 starters will be. Things can change, of course, but that picture became clearer as spring ball progressed.

The QB situation remains muddled. Fisch and his staff unquestionably are closer to naming a starter. But that doesn’t mean they’re close.

Two issues are delaying the process: (1) Neither of the top two spring quarterbacks, Gunner Cruz and Will Plummer, pulled away from the other; and (2) they aren’t the only ones in the race.

Jordan McCloud, a transfer from South Florida, is set to join the program with the next wave of newcomers on June 7. McCloud, a fourth-year sophomore, appeared in 20 games at USF, including 17 starts. He passed for 2,770 yards and accounted for 26 touchdowns. He’s coming here to compete for the job.

We don’t know a ton about McCloud at this point beyond his résumé, which is a lot more extensive than his competitors’. We did get an up-close look at Cruz and Plummer during spring practice, which offered an informative snapshot of their progress and how they fit in Fisch’s system.

Both experienced ups and downs during spring ball. Just when it seemed like one might separate from the other, the script flipped. That’s what led to this comment from Fisch about four-fifths of the way through spring:

“We just need more consistency out of the quarterback position. We're not playing consistent enough; we're not hitting enough passes; we're not controlling the line of scrimmage the way I expect us to.

“We are bouncing back. We're having a couple of tough plays. And then we're bouncing back and having a big play, and it kinda gets the momentum back. But we would like more consistency out of that position ... all positions.”

Cruz faced a rapid, tricky transition and handled it well for the most part. The Queen Creek product transferred from Washington State, where he experienced two coaches and two systems in two seasons — Mike Leach’s version of the Air Raid and Nick Rolovich’s spin on the run-and-shoot.

Not only did Cruz have to learn a completely different scheme — featuring more expansive verbiage, under-center snaps and turn-your-back-to-the-defense play-action fakes — he had to learn it on the fly. Cruz wasn’t able to enroll until March. He basically arrived on campus and jumped right into the fray.

After some initial struggles, Cruz began to show his talent. He has a big frame (listed at 6-5, 224) and a big arm and showed the ability to maneuver within the pocket, reset and throw from odd angles. His release could use some tightening, so processing quickly is crucial. It’s an area where both quarterbacks have improved and will continue to do so.

“I have a lot more familiarity with this system than they do, so I would hope that I could see it a little quicker than they can,” Fisch said. “But my goal, and (QB) coach (Jimmie) Dougherty's goal, is to be able to get them to see it at our pace.”

Plummer appeared to struggle in that area about a week into camp. He conceded that he was thinking too much. His play suffered as a result, leading to stretches of indecisiveness.

Plummer was the closest thing Arizona had to an incumbent, having appeared in three games as a freshman last season. But Fisch’s system was nothing like what Plummer operated at Gilbert High School or at the UA in 2020. Even though he had a slight head start on Cruz, growing pains were inevitable for the second-year player.

After falling behind Cruz for about a week and a half, Plummer fought back. He began to feel more comfortable, and his confidence grew. Where most of his completions early on came in the quick game, Plummer started to connect with receivers deeper down the field. He closed the gap. By the end of camp, Plummer and Cruz were about even.

Cruz — who hadn’t so much as played catch with any of his wideouts before camp began — struggled with his deep-ball accuracy for much of spring. He regularly overthrew receivers on those shot plays.

However, like Plummer, Cruz remained resolute. He launched a perfect pass during the spring game to Jamarye Joiner for a 61-yard gain.

Now both quarterbacks, plus McCloud when he arrives, will have a window to improve their chemistry and timing with the receiving corps during what Dougherty described as “open gym.” Player-run practices are an essential part of the aforementioned third quarter of the offseason. But there’s even more to it than that.

The coaches get limited opportunities to work with players. Fisch said the QBs would attend “a little quarterback school,” which would give them a chance to “take a step back ... go through it all and see if we can help you get better.”

Then, come training camp, the coaches will “roll the balls out again and see what that looks like,” Fisch said. “But we gotta make a decision at some point.”

Given how close the competition appears to be, don’t be surprised if the “fourth quarter” bleeds into overtime.

‘Under construction’: Work is ongoing for Arizona Wildcats QBs as spring winds down

Gunner Cruz and Will Plummer are ‘battling back and forth’; transfer Jordan McCloud will join the QB competition in June. 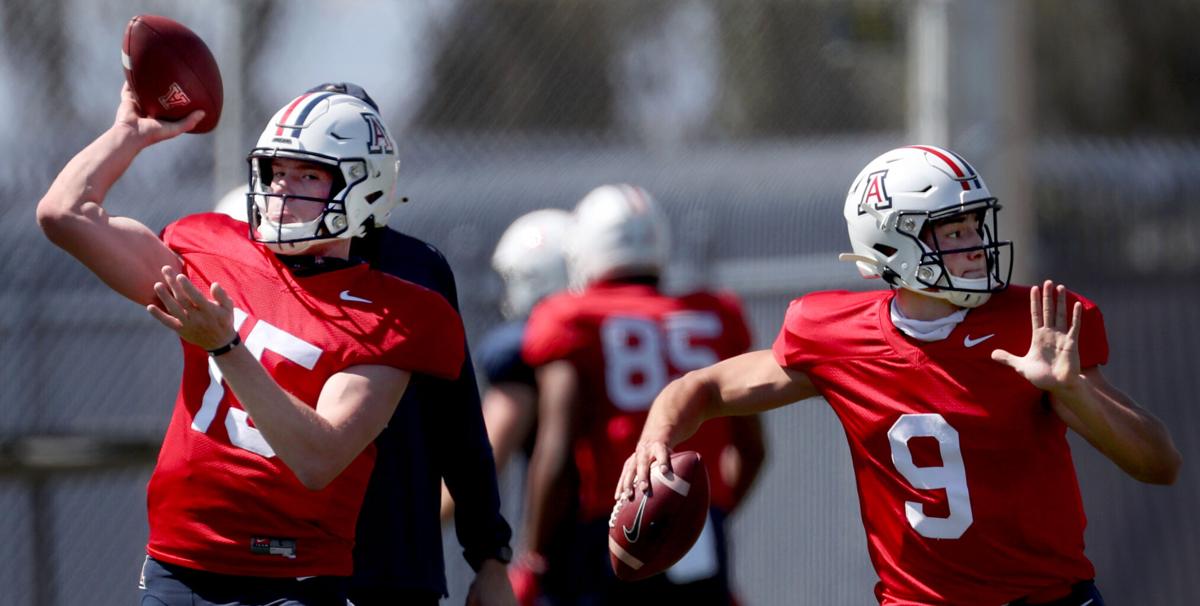 Quarterbacks Will Plummer, left, and Gunner Cruz work on dropbacks during drills in March. 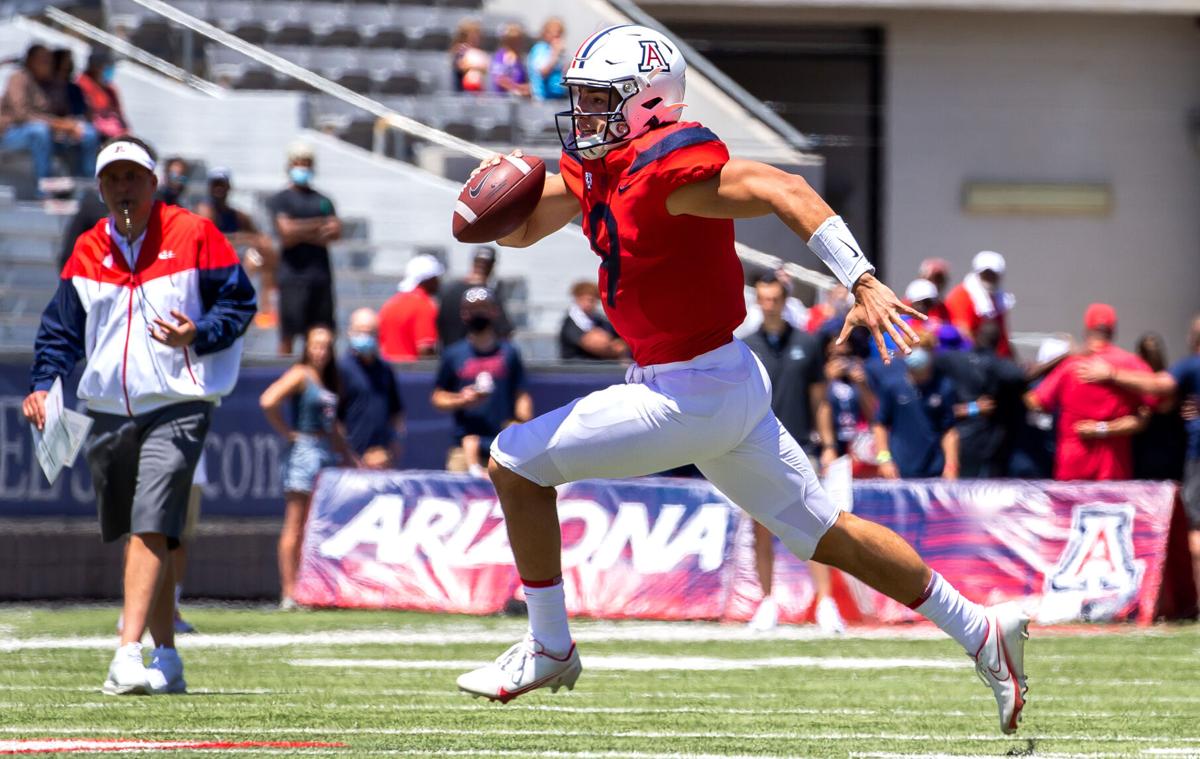 Quarterback Gunner Cruz showed his talent this spring after some initial struggles. 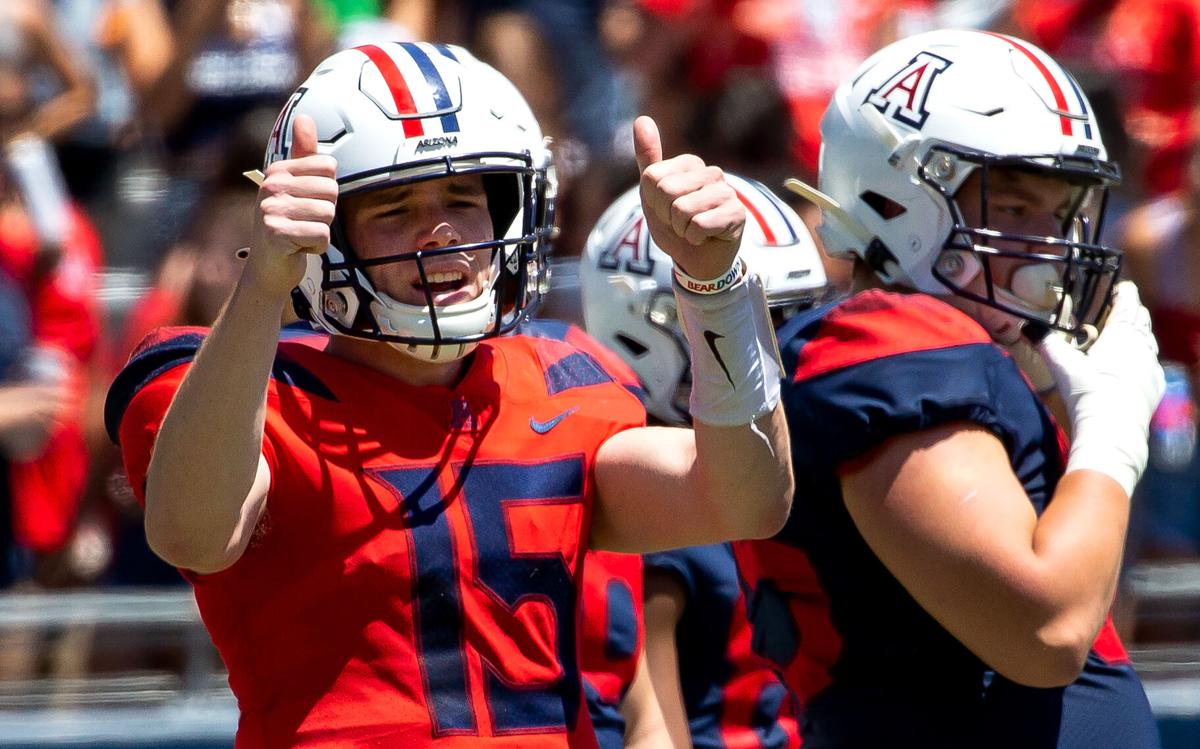 Quarterback Will Plummer communicates with coaches on the sideline during the spring game on April 24.