UA spring football rewind, Part 2: Where are the Wildcats most vulnerable on defense?
Share this
1 of 2 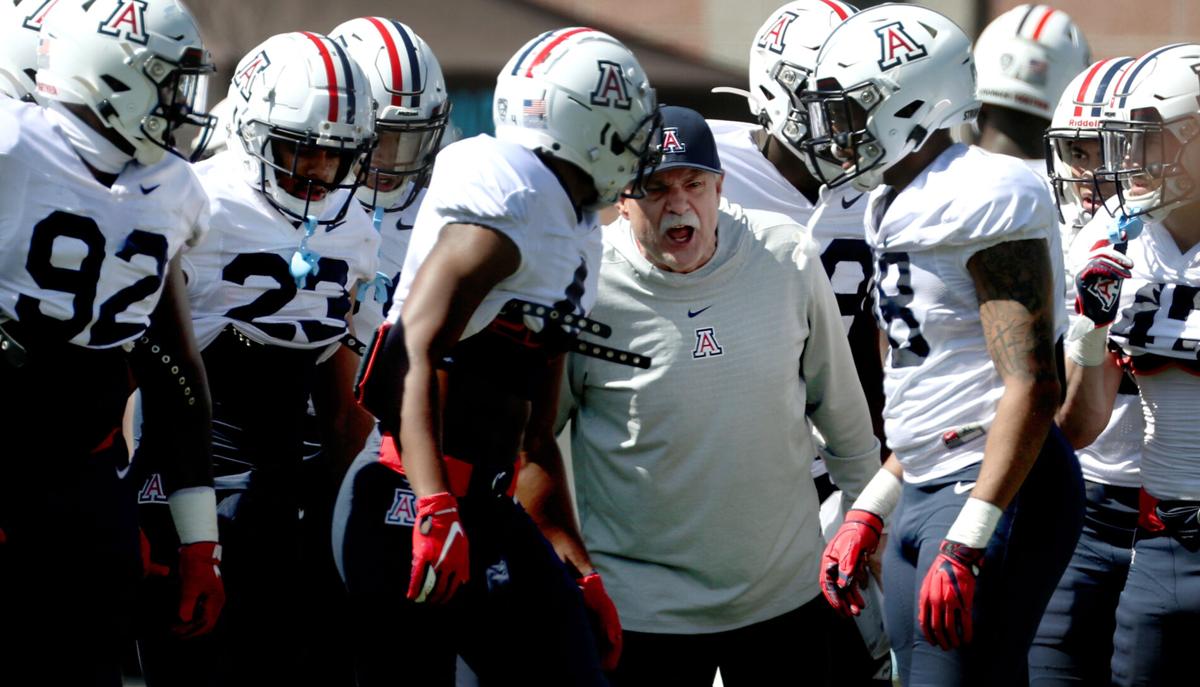 First-year defensive coordinator Don Brown has had success at every stop. His latest challenge — revamping a historically bad UA defense — will be a tough one. 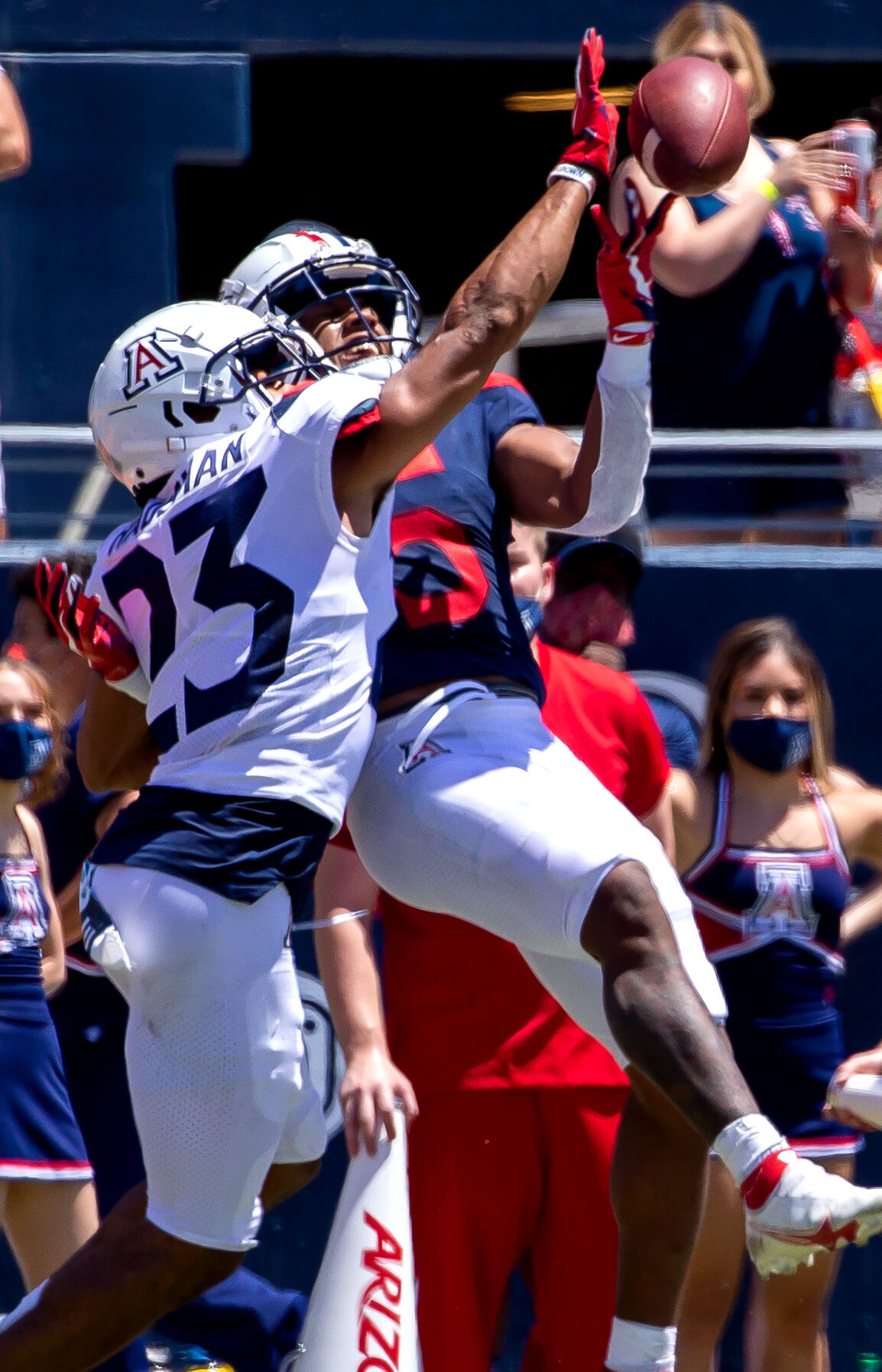 Cornerback Malik Hausman breaks up a pass intended for wide receiver Brian Casteel during the Wildcats’ spring game last month. Hausman, the team’s new nickel back, had a team-high three pass breakups in the spring game.

It feels almost inevitable that Arizona’s defense will improve in 2021, especially when you consider two factors:

1. New coordinator Don Brown has succeeded everywhere he has been, from Massachusetts to Michigan.

2. The Wildcats couldn’t possibly be worse than they were last season.

It’s easy to overlook specific statistics in the wake of the Territorial Cup bloodbath and the changing of the guard that followed. The 2020 season, such as it was, seems more like a bad dream than a campaign that counts toward the permanent record.

It’s also the most recent reference point we have. The CliffsNotes are as follows: Arizona ranked last in the Pac-12 in total defense, rushing defense, points allowed, sacks and takeaways.

So there’s nowhere to go but up. Heck, it wouldn’t be surprising if the UA surpassed its totals for sacks and yardage lost in the first quarter against BYU. The Wildcats had two sacks in five games in 2020. They cost the opposition 3 yards. The next-lowest figures in the league were seven (by two teams, including Cal, which played one fewer game) and 31.

The ultra-aggressive Brown undoubtedly will upgrade that area. But all of Arizona’s problems can’t be solved in one offseason. Jedd Fisch and his staff have tried to plug every conceivable hole, but some things are out of their control.

Which brings us to the second of three lingering questions about UA football now that spring practice has concluded:

Where is Arizona’s defense most vulnerable if injuries were to strike?

The initial temptation is to say “everywhere,” but that’s overly simplistic. The UA has a sufficient stockpile of experienced and/or promising players at certain positions to withstand a reasonable amount of injuries.

Linebacker is one such spot. Arizona is adding transfers Treshaun Hayward, Jerry Roberts and Malik Reed to a group that already includes Anthony Pandy, Derick Mourning and Issaiah Johnson. So the Wildcats essentially have a complete two-deep – with a handful of freshmen still due to arrive and redshirt freshman Jabar Triplett possibly coming back from injury.

Reed was an unexpected but welcome late add after he entered the NCAA transfer portal last week. The Chandler High School product, who had been at Wisconsin, is the latest of several in-state players to pledge to the UA since Fisch became coach.

Safety also is in better shape than you might think. Jaxen Turner and Jaydin Young took most of the first-team reps during spring camp, and they provided a steadying, playmaking presence on the back end of the defense. Yet it’s easy to envision Gunner Maldonado and Isaiah Mays – who were slowed by injuries during spring – pushing them hard for playing time.

Another position in the secondary is more worrisome, and it tops our list of most vulnerable spots. That would be cornerback, where Christian Roland-Wallace and Isaiah Rutherford could form one of the top starting duos in the Pac-12.

Two players emerged in spring as the primary backups at a position that’s vital to success in Brown’s pressure-oriented, man-coverage-heavy scheme: Malik Hausman and Treydan Stukes.

Hausman is a fifth-year redshirt junior who has totaled five tackles in 10 games as a Wildcat. The coaches found a role for him in spring as the third corner in the nickel package, and he performed well; Hausman led all defenders with three pass breakups in the spring game.

But if Roland-Wallace or Rutherford were to go down, and Hausman was the first choice to step in, a domino effect would occur: Who becomes the nickel? There’s also no guarantee Hausman would be as effective on the outside.

Stukes is an interesting prospect. He joined the program as a walk-on last year from Millennium High School in Goodyear, where he totaled 97 tackles and 11 interceptions in three seasons. Stukes also was one of the top triple- and long-jumpers in the state. So he has a promising athletic profile.

He’s also inexperienced. So are incoming freshmen Jakelyn Morgan and Anthony Simpson (who could end up playing receiver). Could one of them emerge as an immediate-impact player? Sure. But it’s a lot to ask.

Defensive end is similar to cornerback: The front-line options are appealing, the reserves uncertain.

Veteran Jalen Harris had a strong camp before sitting out the spring game because of an illness. Harris didn’t record a sack last season but expanded his game playing outside linebacker and finally could blossom in Brown’s scheme and under Ricky Hunley’s tutelage.

On the other side, JB Brown returned after opting out last season and was among the defense’s top performers in spring. Motivated and in great shape, Brown is another breakout candidate.

Veteran Nahe Sulunga also had a promising spring and might be ready to contribute after appearing in only three games over the past three seasons. Don Brown and Hunley praised second-year freshman Paris Shand as well; listed at 6-5, 283 pounds, Shand can play inside or outside.

But neither Sulunga nor Shand profiles as a speed rusher in the mold of Harris. None of the known incoming players does either.

The one player on the roster who does is Harris’ younger brother, Jason. The second-year freshman transferred from Colorado in January and, at this stage in his career, looks a lot like Jalen did a few years ago. Jason is long (6-7) and relatively lean (240). He’s still developing, and it might take another year before he’s ready to contribute.

Despite the addition of Reed, Arizona still has some flexibility to add talent to its roster and is exhausting every possibility. Brown intimated that the team was eyeing a defensive lineman (“one more guy up front”). He didn’t specify whether it was an end or tackle. A case could be made for either.

First-year defensive coordinator Don Brown has had success at every stop. His latest challenge — revamping a historically bad UA defense — will be a tough one.

Cornerback Malik Hausman breaks up a pass intended for wide receiver Brian Casteel during the Wildcats’ spring game last month. Hausman, the team’s new nickel back, had a team-high three pass breakups in the spring game.