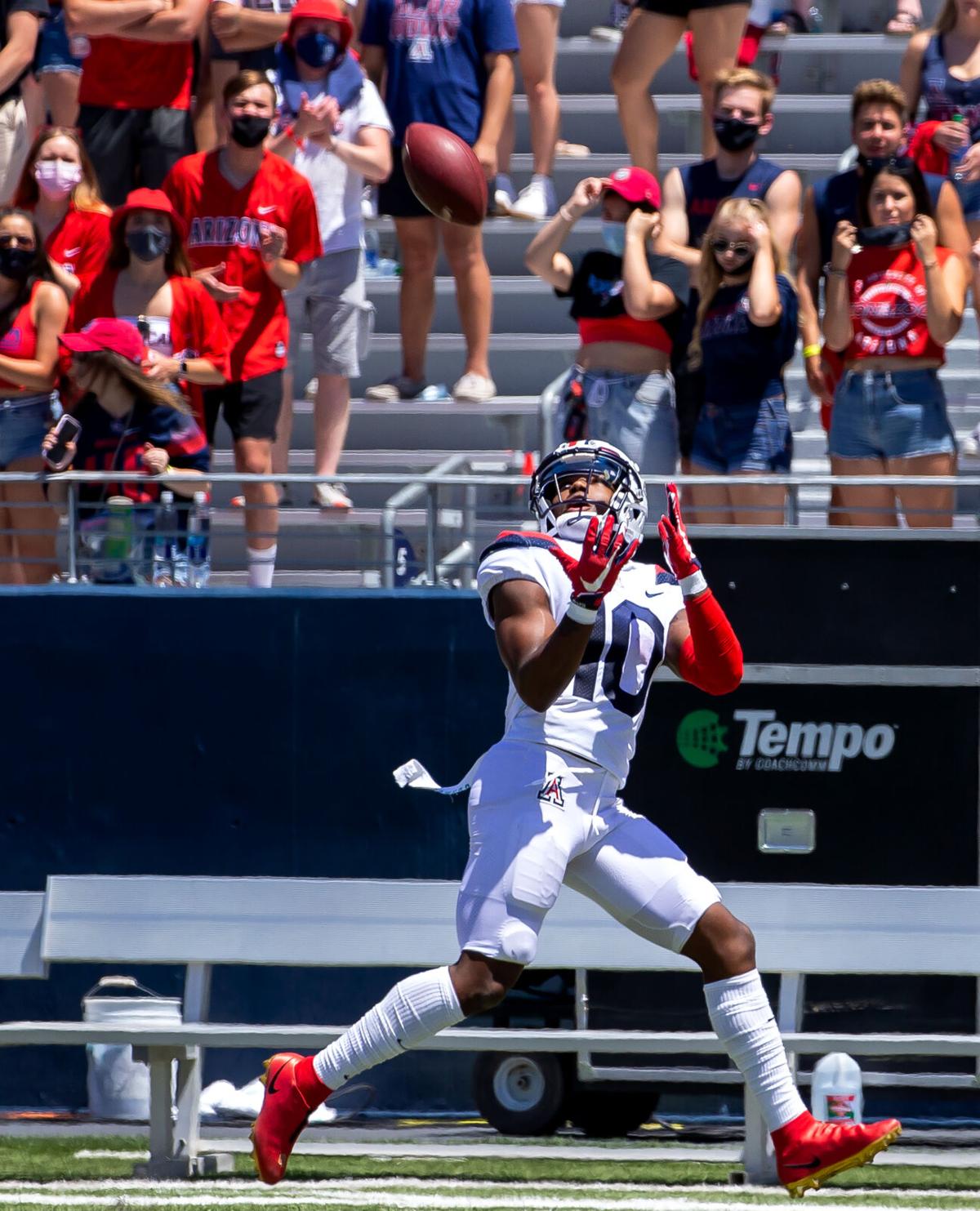 Wide receiver Jamarye Joiner caught a touchdown pass in the spring game, then suffered a foot injury that will keep him out for months. 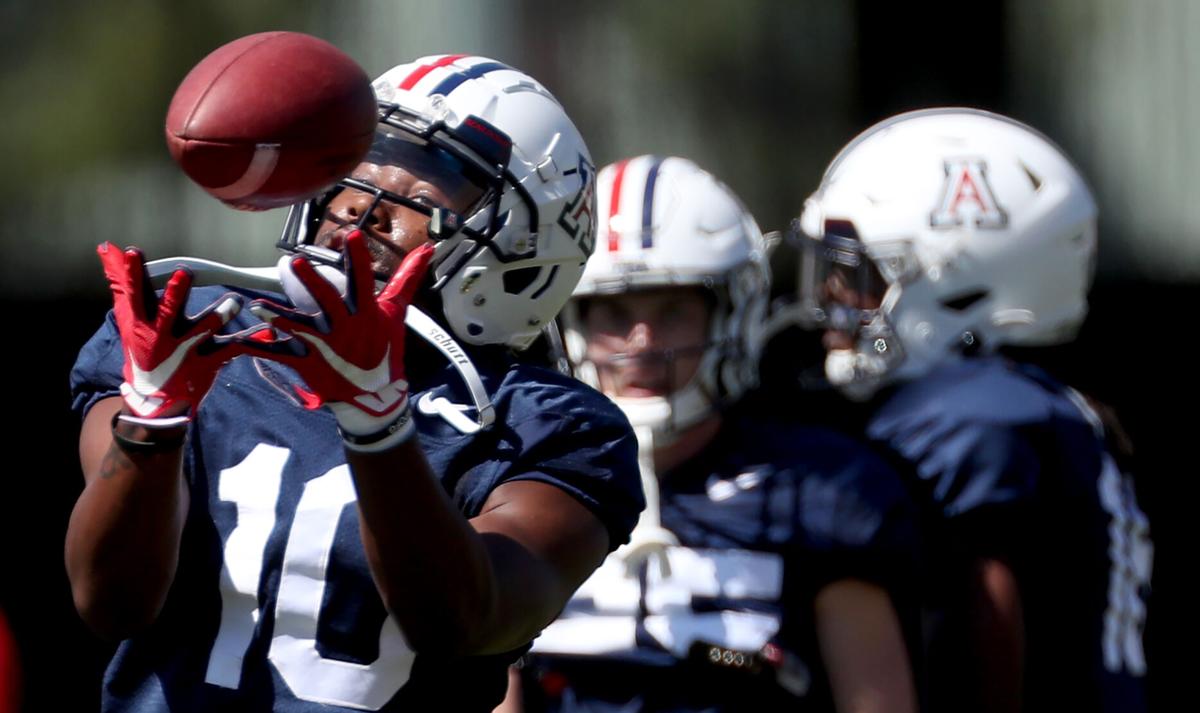 Jamarye Joiner hones his over-the-shoulder skills during a spring practice in March.

It was at once one of the most encouraging and discouraging moments of spring practice.

In the second quarter of Arizona’s spring game on April 24, quarterback Gunner Cruz launched a deep pass down the left sideline. The ball landed exactly where it was supposed to, into the awaiting arms of receiver Jamarye Joiner, who hauled it in for a 61-yard gain.

That would be the last we’d see of Joiner on the field. He got banged up on the play and spent most of the rest of the game sitting on the bench with a boot on his left foot — the same foot that required surgery a year ago.

Joiner suffered a recurrence of the Jones fracture that sidelined him for most of the 2020 offseason. He had surgery last week and conceivably could miss the start of the ’21 season.

Just when it looked as if the Wildcats’ receiver rotation had solidified — and a potential starting quarterback was in sync with one of its top performers — the unit suffered a blow. Joiner is expected to be back at some point this year, but the injury casts doubt on a group that lacks certainty beyond the top tier.

That’s the area we’re going to explore in our third and final lingering question about UA football now that spring practice is over:

Does Arizona have enough viable wide receivers for 2021?

Jedd Fisch certainly seemed to think so when he was asked that question during spring practice. But he also noted that such things were measured on a different scale in the NFL, where he had spent the previous three seasons.

“I’m coming from a league where you’d only dress four or five, maybe six if you’re going to count a special-teams player, for a game,” Fisch said. “So I consider it a huge bonus that we have as many players as we have here.”

Arizona had nine scholarship wideouts for spring ball, although one of them, Jaden Mitchell, worked exclusively on the side as he continued to rehab from knee surgery. Receivers coach Kevin Cummings said he had six players who were “playing high-level football,” a group that presumably included a healthy Joiner, plus some “younger guys that are working up.”

The Wildcats will be adding to that group in June. Ma’jon Wright, who showed great promise as a freshman last season before transferring to Middle Tennessee State, is expected to return to the UA. Anthony Simpson, a two-way prep prospect, is headed to Tucson from Connecticut. And Arizona just received a preferred walk-on commitment from Phoenix Pinnacle’s Dorian Singer, who had more than a dozen scholarship offers.

Those three, plus the nine who were here in spring, would give Arizona 12 scholarship-level receivers. That’s a good total

However, beyond the top four who are healthy — Stanley Berryhill III, Brian Casteel, Boobie Curry and Tayvian Cunningham — every wideout comes with a caveat.

We already have mentioned Joiner and Mitchell’s injury issues. Their availability for 2021 is in question, at least for now. Mitchell is recouping from a torn ACL in his right knee suffered last fall. He tore the ACL in his other knee as a senior in high school in 2017.

The three other returnees who participated in spring ball were Thomas Reid III, Jalen Johnson and Dyelan Miller.

Cornerbacks coach DeWayne Walker said Reid is one of his favorite players on the team because of his steadiness and professionalism. Reid, who began his UA career as a walk-on, earned a scholarship in August 2019. But he mostly has made his mark as a special-teams player. Becoming a rotation regular at receiver would represent a role change for which Reid might not be ideally suited.

Johnson possesses a desirable size-speed combination (6-2, 212) and earned plaudits from Cummings during camp. However, Johnson is still young (third-year sophomore) and was suspended last season because of an off-field incident. He still has work to do to realize his potential.

Miller also has good size (6-2, 197), but he’s just getting started. He was a freshman last season but didn’t appear in any games. He seldom worked with the top units during spring and still has much to prove.

Miller’s classmate, Wright, impressed in 2020, catching 15 passes for 176 yards and a touchdown. After a strange offseason saga, he is supposed to rejoin the team this summer. But it’s unclear whether Wright will be eligible in 2021 after he spent time on the MTSU campus.

Simpson put up crazy numbers at Bloomfield High School in 2019, totaling 2,491 scrimmage yards and 25 touchdowns in 13 games. He also had 10 interceptions as a defensive back, which could be the role he ends up playing here. Cornerback is arguably a bigger need for the UA than wideout.

The staff was thrilled to land Singer, who is listed by the recruiting sites as an athlete and whose early offers included Texas. But you can’t assume any incoming freshman will be ready to produce immediately.

Could Arizona get through the season with Berryhill, Casteel, Curry and Cunningham as their core receivers, with a handful of others contributing? Sure. It helps that Fisch’s offense doesn’t require as many wideouts to be on the field.

Tight ends play a prominent role in Fisch’s scheme. For most of spring, the UA offense vacillated between “12” (one running back, two tight ends) and “11” (one back, one tight end) personnel. The former requires only two wide receivers to be on the field, the latter three.

In the offenses run by Fisch’s predecessors, 11 personnel was the primary formation. The changeup usually was “10” personnel, requiring four wide receivers.

So the need for 10-12 wideouts isn’t as great as in years past. But four “sure things” isn’t enough either.

The happy medium lies somewhere in between, and it’ll take good health and accelerated development to get there.

Arizona held to just five hits in 8-0 loss to Marlins on Wednesday night.

Phoenix, which entered the game tied for the best record in the NBA, loses 135-103 in Atlanta.

Wide receiver Jamarye Joiner caught a touchdown pass in the spring game, then suffered a foot injury that will keep him out for months.

Jamarye Joiner hones his over-the-shoulder skills during a spring practice in March.