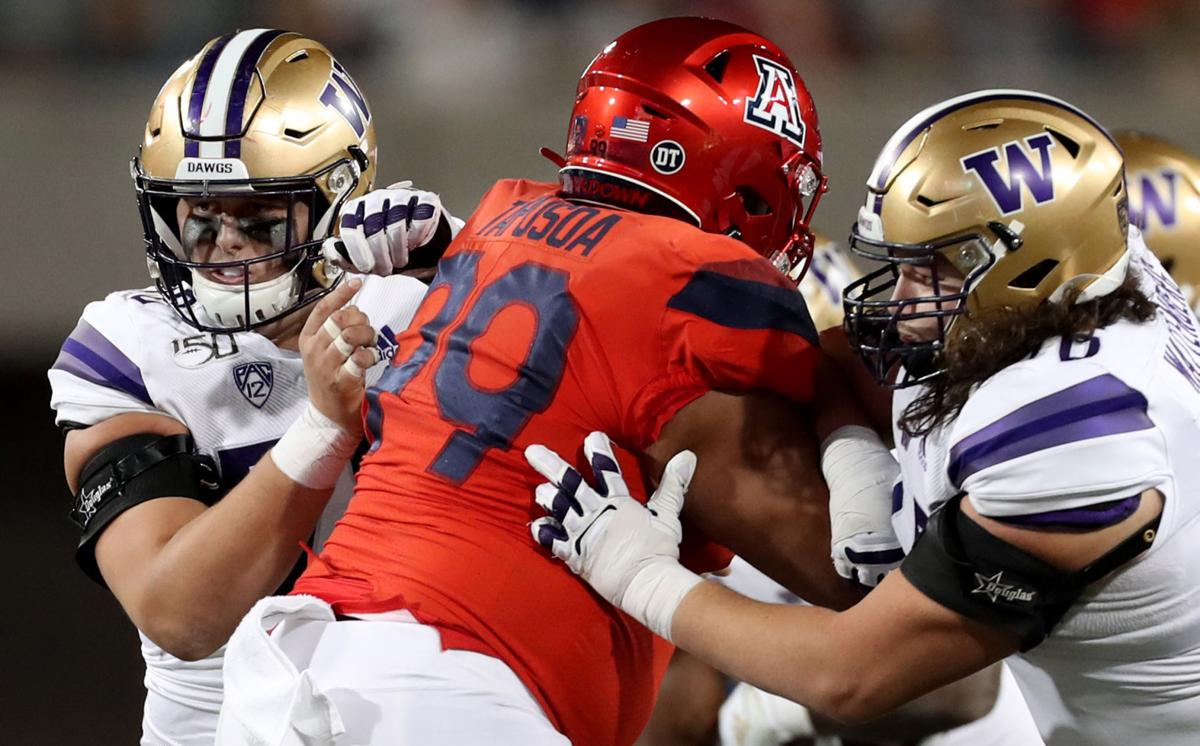 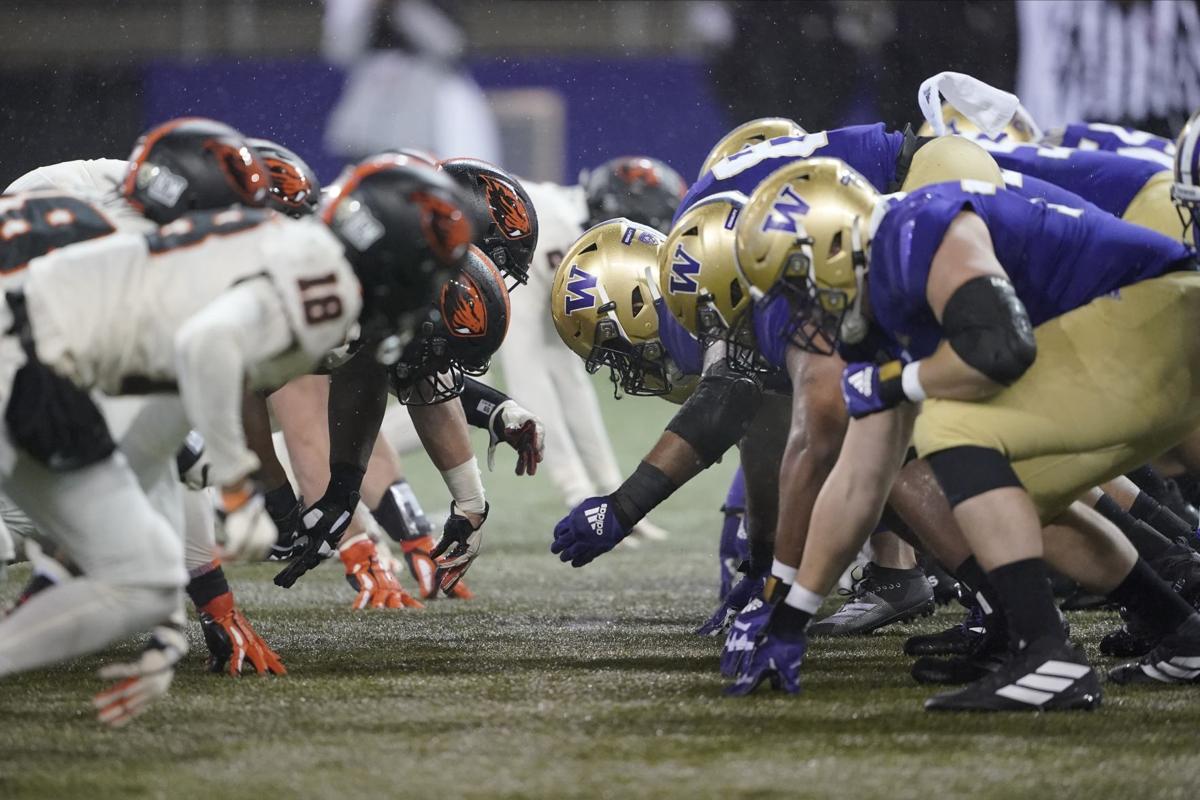 Washington and Oregon State players square off during last Saturday’s game in Seattle. The Huskies rushed 51 times for 267 yards against the Beavers, even mixing in a few fullback dives.

On Washington’s third play from scrimmage this season, Huskies quarterback Dylan Morris handed the ball to Jack Westover — a tight end lined up at fullback.

Westover gained seven yards and a first down on a play typically known as “fullback dive.” Pac-12 Networks analyst Yogi Roth couldn’t remember the last time he had seen one in the conference.

“Who is the last player to run a fullback dive?” Roth wondered. “Owen Marecic?”

Marecic played fullback and linebacker under Jim Harbaugh at Stanford. The last time Marecic touched the ball as a Cardinal came in the Orange Bowl on Jan. 3, 2011.

Westover finished with three rushes for 16 yards. They were his first in a game since eighth grade, according to the Seattle Times.

The Arizona Wildcats know they’re facing something different when they visit UW on Saturday. Their Week 1 opponent, USC, plays a version of the “Air Raid” offense. It’s much closer to the norm in college football than the scheme the Huskies debuted last week. The latter can best be described as “ground and pound.”

“Some old-school football,” said UA coach Kevin Sumlin, whose team is seeking to break an eight-game losing streak. “Some I-formation, some offset-I, 13 personnel, which is three tight ends. They’re going to run it.”

UW is an outlier in that regard. Entering Saturday, the other 11 Pac-12 teams had an almost even split between running and passing plays — 611 vs. 623. (The former does not account for QB scrambles; the latter is adjusted for sacks.)

Excluding one rush by quarterback Kedon Slovis and one kneel-down, the Trojans rushed the ball 30 times last week. They passed it 43 times.

“It’s a different game for Arizona,” Roth said. “They were dropping eight into coverage pretty regularly. You’re not going to do that in this game. If anything, it’s going to be the opposite.”

The Huskies didn’t just show a tendency to run the ball at an extreme rate. They did it out of (literally) heavy formations.

According to The Athletic, Washington had at least two tight ends on the field for 57.3% of its offensive snaps, including 36 of 51 rushing plays (70.6%). The Huskies also used a sixth offensive lineman for 13 snaps.

Washington lined up in the shotgun just 30.7% of the time, per The Athletic. USC operated out of the shotgun on every play, to the dismay of its fans and alums. Arizona ran one play from under center last week, a QB sneak, and it felt like witnessing Halley’s Comet.

Lake suggested to Seattle media this week that UW’s offense would look “different” Saturday, at least to some extent. The Huskies could be more balanced, he said, if that’s how they believe they should attack the Wildcats.

Lake issued those decrees after arriving for his virtual news conference in a hat imprinted with four words, in all caps: “RUN THE DAMN BALL.”

“For an offense to be successful and to win a lot of football games, you have to run the football,” Lake said. “If you look at any team that’s won, whether it’s college or national championships or Super Bowls, their offenses are really good at running the football. That sets up everything.”

Lake surprised many by naming John Donovan the Huskies’ quarterbacks coach and offensive coordinator. Donovan had spent the previous four seasons as an offensive assistant for the Jacksonville Jaguars. He previously served as the offensive coordinator at Vanderbilt and Penn State under James Franklin. Neither ranked higher than 80th nationally in total offense in five seasons with Donovan as the OC.

Lake clearly has some influence on the Huskies’ offensive style. Their personnel is well suited to a smash-mouth approach.

Lake described Ale as a “huge human being.”

“He loves run-blocking,” Lake said. “If I was a linebacker playing for our opponents, I’d want to make sure I got out of his way. He is a monster.”

Arizona has struggled in recent years against the conference’s most physical fronts. Sumlin and his staff have been working to solve that very problem.

The UA defensive line is no longer undersized.

Arizona yielded 173 rushing yards against USC. That isn’t great, but when you consider that the Trojans had topped 200 in seven straight meetings, it represented progress.

“It’s been an emphasis since we made the defensive change,” Sumlin said, referring to hiring Paul Rhoads as defensive coordinator in December. “I think it was apparent Saturday that we’re better. It’s gonna be a challenge this week, because this is one of the top run offenses in our league.”

The Wildcats are bigger and deeper up front. Their second-team line, which includes 2019 starter Trevon Mason, averages 323.3 pounds. Sumlin suggested the rotation would be expanded even further this week.

Roy Lopez, one of the line’s newcomers, knows exactly what the UA is up against.

“They like to pound the ball,” said Lopez, a 6-2, 318-pound graduate transfer from New Mexico State. “As a D-line, we kinda take that a little personal, which we should, going into the game.

“As a nose guard, you just gotta hold the fort down in the middle. When the plays can be made, make the play. Or if you can cut off the play, get up the field, force them to cut it back, cut the flow of the offense. Just cause any sort of disruption.”

USC gained nearly two-thirds of its rushing yards (108) in the second half, and that’s concerning. Lopez said run defense starts and ends with the defensive line. But it was the Wildcats’ lack of depth and size at linebacker and safety that proved costly against the Trojans.

No matter what Lake said about diversifying the offense, he undoubtedly took note of that. So expect more fullback dives and multiple-tight end sets from the aptly named Huskies.

“I would imagine we’ll see another 40 to 50-plus run game against what we know is the roster of Arizona, which doesn’t have tremendous depth at the linebacker position,” Roth said. “Just see if you can wear them out.”

The Star columnist checks in with the big questions — and answers — as Arizona prepares for Saturday night's game at Washington.

The UA football team boarded a plane to Seattle, as the Wildcats prepare for their first road game of the season.

Coach Sean Miller did not offer more specifics but said Lee has not yet returned to practice, which casts significant doubt on whether Lee would be ready in time to face NAU in the Wildcats' opener on Wednesday.

Washington and Oregon State players square off during last Saturday’s game in Seattle. The Huskies rushed 51 times for 267 yards against the Beavers, even mixing in a few fullback dives.