Now that they have finalized their coaching staff, the Arizona Wildcats can shift all of their attention to player personnel. They still have work to do.

The commitment of three-star all-purpose back Frank Brown on Tuesday raised Arizona’s total of known 2020 signees and/or commits to 14 – 15 if you include linebacker Jabar Triplett, who wasn’t on the official list for December but has given every indication that he’s coming. If two others in that committed-but-not-yet-signed category – offensive lineman Cedric Melton and cornerback Alphonse Oywak – follow suit, the Wildcats would have 17 additions. They have room for the full 25.

What areas does Arizona need to address? We took a look at the current roster – returning players plus signees – to find out.

What follows is a position-by-position breakdown entering a critical recruiting period ahead of National Signing Day on Feb. 5. Before we dig down, here are some notes about the overall construction of the roster as of this writing:

Notes: Four is about the right number for this position. Rodriguez should have two years of eligibility left after appearing in only one game last season. Gunnell enters spring practice as the favorite to start in ’20, but Doyle deserves a fair chance to compete for the job. Ideally, Plummer – supremely talented but still somewhat raw – will redshirt this season.

Notes: As mentioned above, Brown is set to join this group, bringing the total up to six. It’s a bit of a crowded room, and it’ll be challenging to find touches for everyone. But it’s also a position that’s more susceptible than most to attrition. Additionally, Brown and Wiley are capable of lining up outside as receivers.

Notes: This is a really crowded room, although it should be noted that Arizona often plays four wideouts at a time, so there are plenty of snaps to go around. The Wildcats used all sorts of different combinations in 2019, and more of the same is expected this year. If Arizona is unable to add anyone at safety, could someone from this group move there?

Notes: Arizona added JC transfer Marshall after Jake Peters entered his name in the NCAA transfer portal and Drake Dabney decommitted. Marshall is an excellent blocker, which has been the primary duty for tight ends here in recent seasons. That could change with Gunnell at quarterback.

Notes: Undermanned at this position for several seasons, Arizona is getting there. With two more additions (a decent possibility) and no departures from the current group, the Wildcats would be at 15 scholarship linemen – which is exactly where offensive line coach Kyle DeVan would like to be. “If you have two-deep, you’re living good,” DeVan said last spring. “Maybe three of them are really your backups – a center, a swing guard and a swing tackle. And then those other two are just a little bit behind. Then you have five developmental guys that are just kind of on the scout team. Every day they’re getting better in the weight room.”

Notes: Arizona is expected to shift to a base 3-4 front under new defensive coordinator Paul Rhoads, requiring some positional projections. We see Brown and Terry as defensive ends in that scheme. We also see a need for further reinforcements. There simply aren’t enough proven entities here.

Notes: Players such as Wilborn and Harris are obvious candidates to become 3-4 outside ’backers; Pandy is less so, but that’s what we’re hearing, at least as of now. Even if young players such as Siaumau-Sanitoa and Watson develop, Arizona needs to add more edge rushers. The UA has offered at least two already, and more are surely on the way.

Notes: Even if you add Triplett to the mix, four isn’t enough. As with the offensive line, you’d like to have a two-deep you can trust with a third group of developmental players. Also, Fields and Schooler are entering their final seasons and will need to be replaced. They’ve been remarkably durable during their time as Wildcats; neither has missed a game in three seasons.

Notes: The number jumps to seven if Oywak signs. Like Roland-Wallace and Wolfe this past season, Oywak likely would play immediately in some capacity. Adding one more corner wouldn’t hurt, especially if Rhoads wants a true nickel in passing situations.

Notes: Arizona deployed three safeties regularly under former defensive coordinator Marcel Yates. If the 3-4 indeed becomes the base defense, the Wildcats won’t need as many. But they still need to replenish this group, which currently features only one underclassman on scholarship.

Notes: Loop has been brought in to compete with Havrisik and eventually succeed him. Arizona is hopeful Ostendorp will take a leap in his second season. Unless Loop gets a look at punter, Ostendorp’s only competition will come from walk-ons, which isn’t unusual. Don’t expect any additional scholarship specialists in this cycle.

Buh has extensive experience as an FBS defensive coordinator, most recently at Rutgers and Maryland.

How Gunnell's first year stacks up, Cats on the Pac-12 team of the decade, Ka'Deem Carey's new deal and more.

Ex-Wildcat Khalil Tate: ‘Not my plan’ to play positions other than QB in NFL

Tate is participating in the College Gridiron Showcase in Fort Worth, Texas.

The UA again opens the season in 'Week Zero,' hosting Hawaii on Aug. 29.

Murray's alma mater could be interested in bringing him back; plus, assessing J.J. Taylor's draft stock, PFF's QB ratings and the latest on the recruiting front.

Former Arizona Wildcats DC Marcel Yates gets a new job, and it's in the Pac-12

The former Sooners star earned rave reviews for his work with the UA backs in 2019. 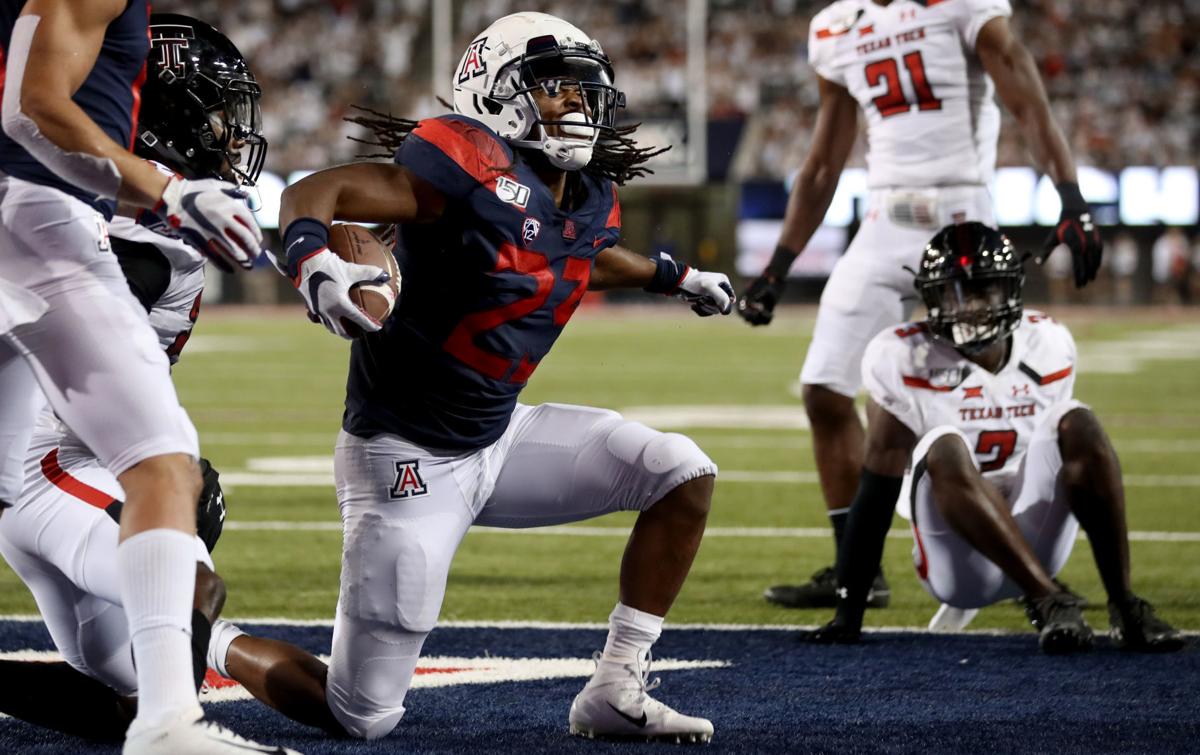 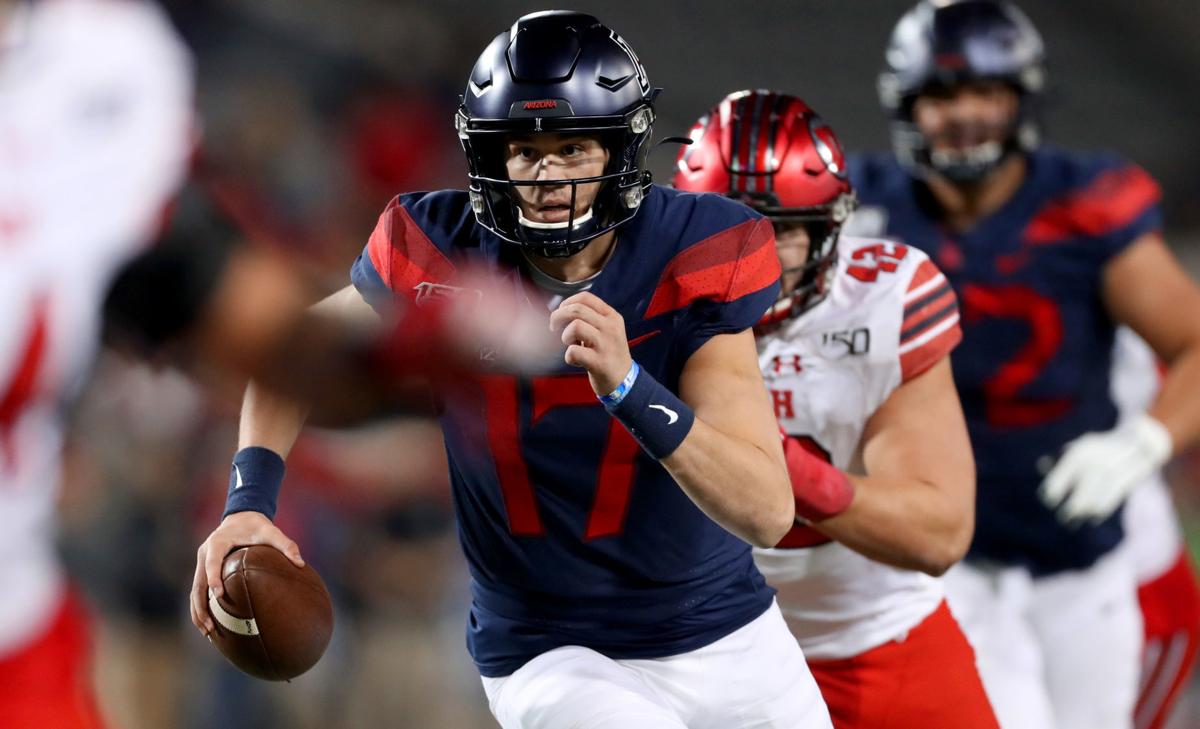 Grant Gunnell completed 101 of 155 passes for 1,239 yards and nine touchdowns in his first season with the Arizona Wildcats. The true freshman was intercepted just once. 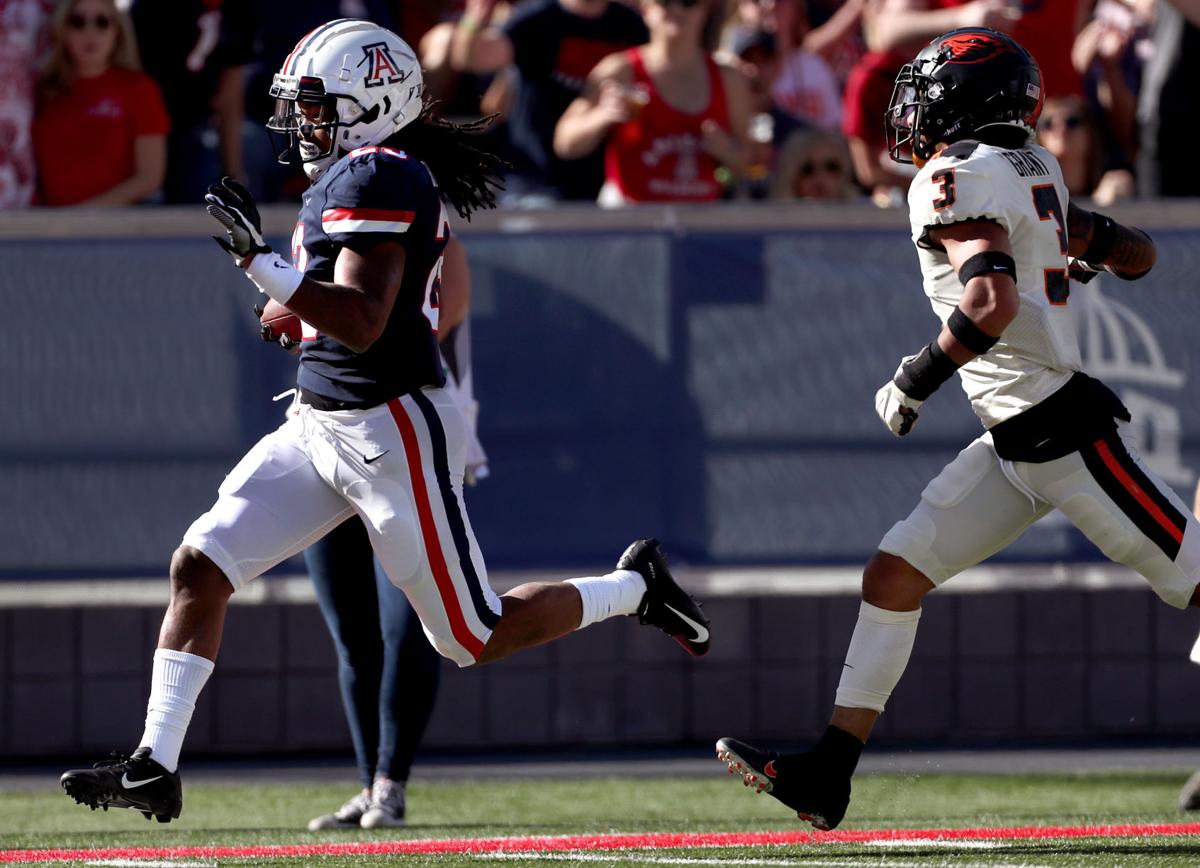 Arizona running back Gary Brightwell (23) motors away from Oregon State defensive back Jaydon Grant (3) on his way to the end zone in the second quarter of their Pac12 football game at Arizona Stadium, Tucson, Ariz., Nov. 2, 2019. 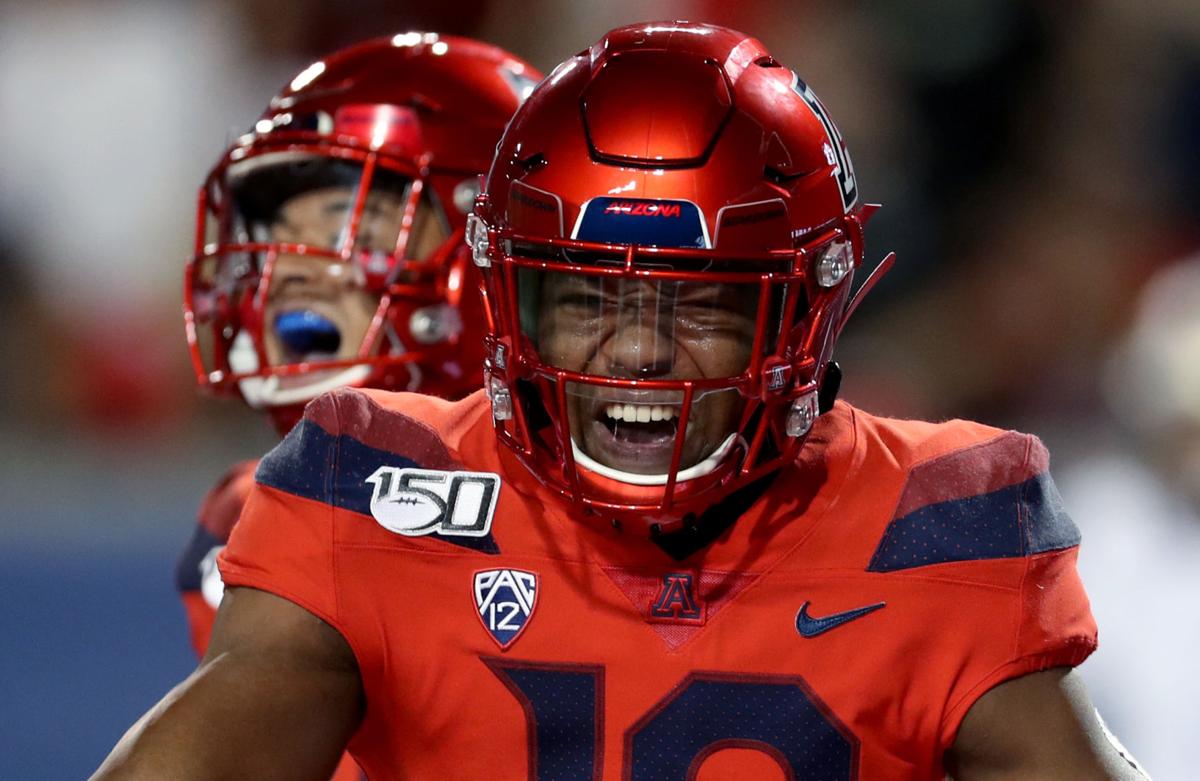 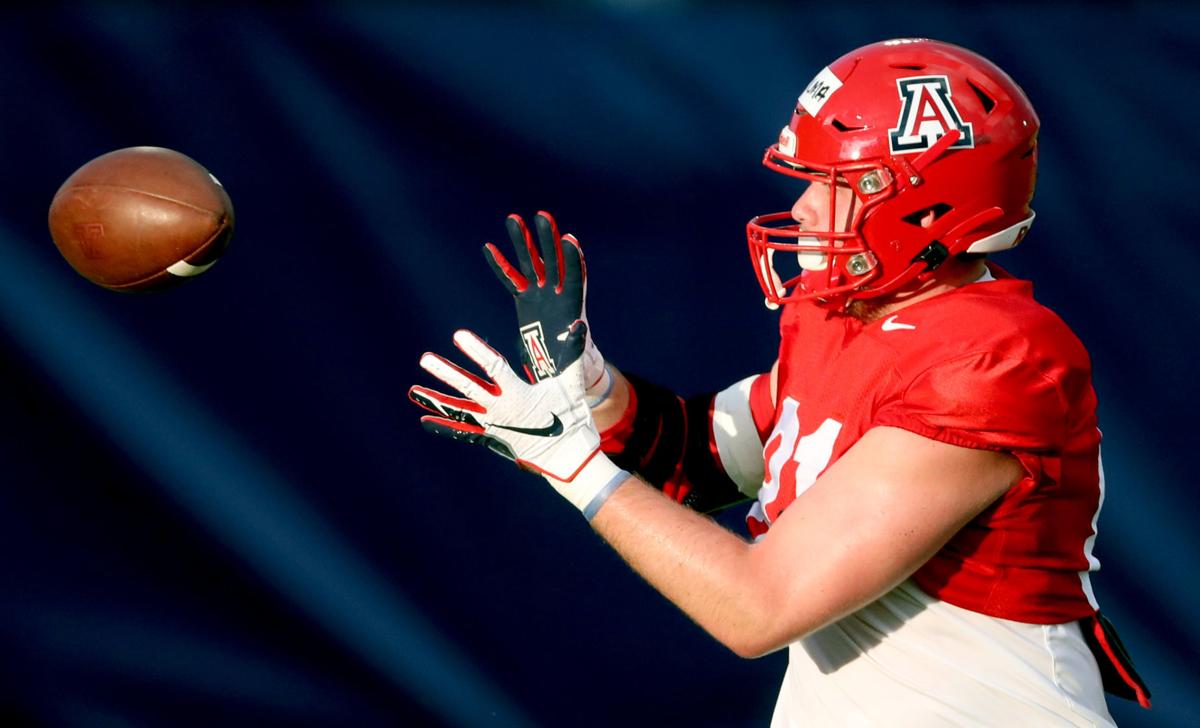 University of Arizona Bryce Wolma runs routes while working out with the tight ends on day 6 of their pre-season, Tucson, Ariz., August 1, 2019. 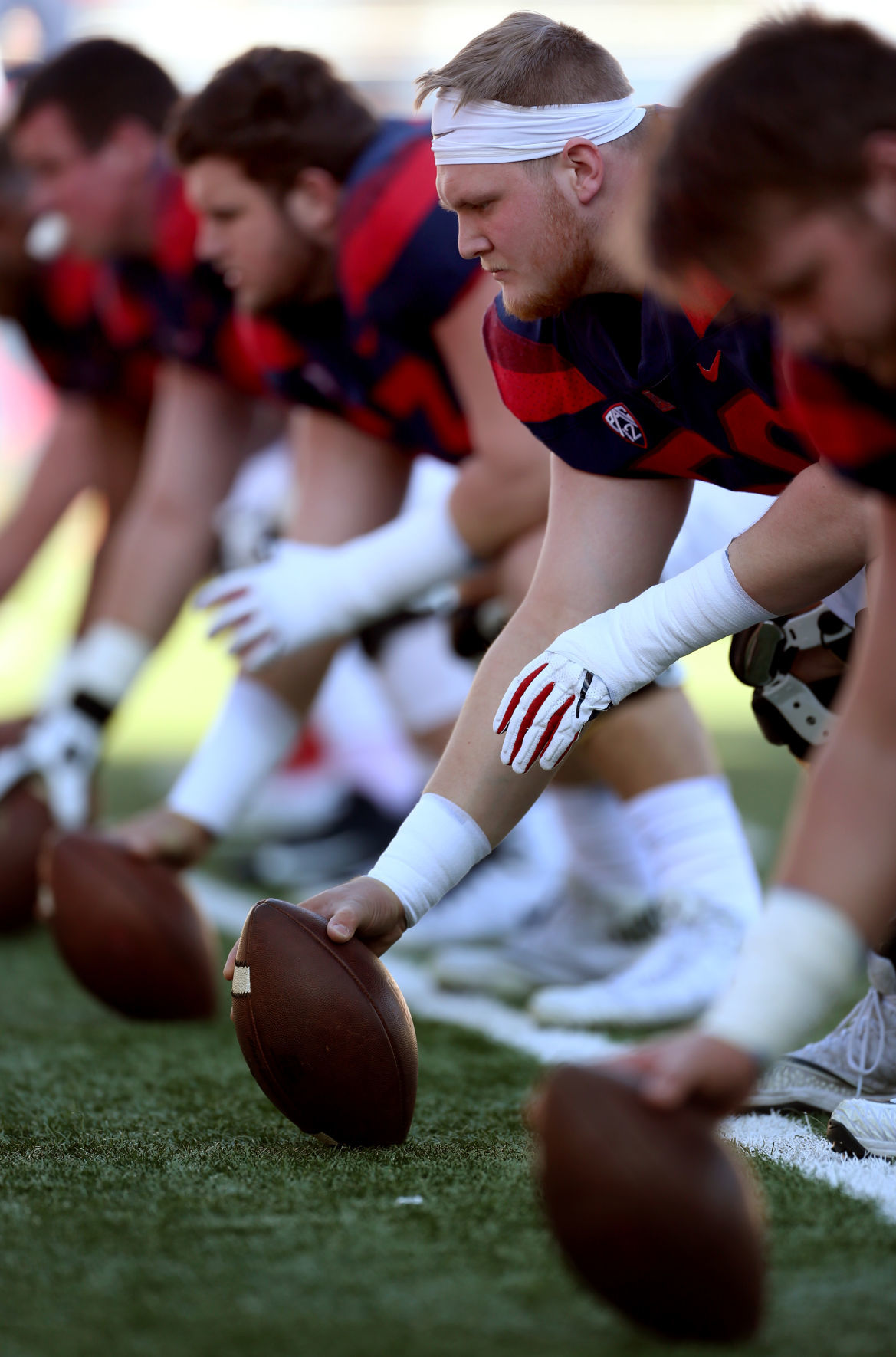 Center Josh McCauley earned a scholarship at the end of spring drills. He started every game in 2018. 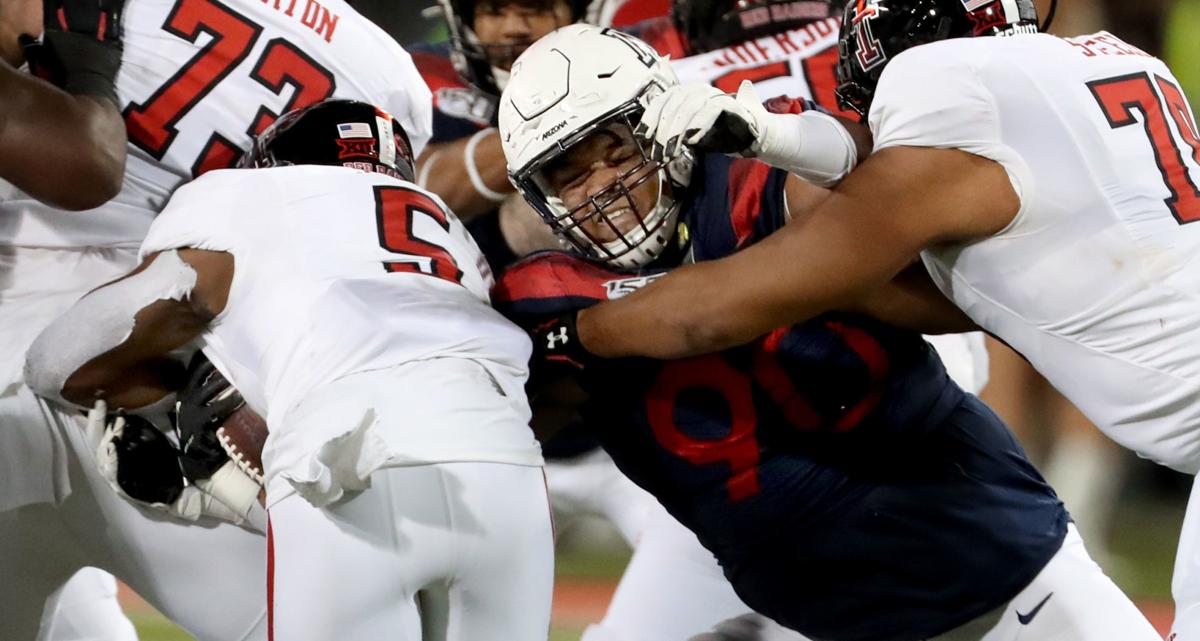 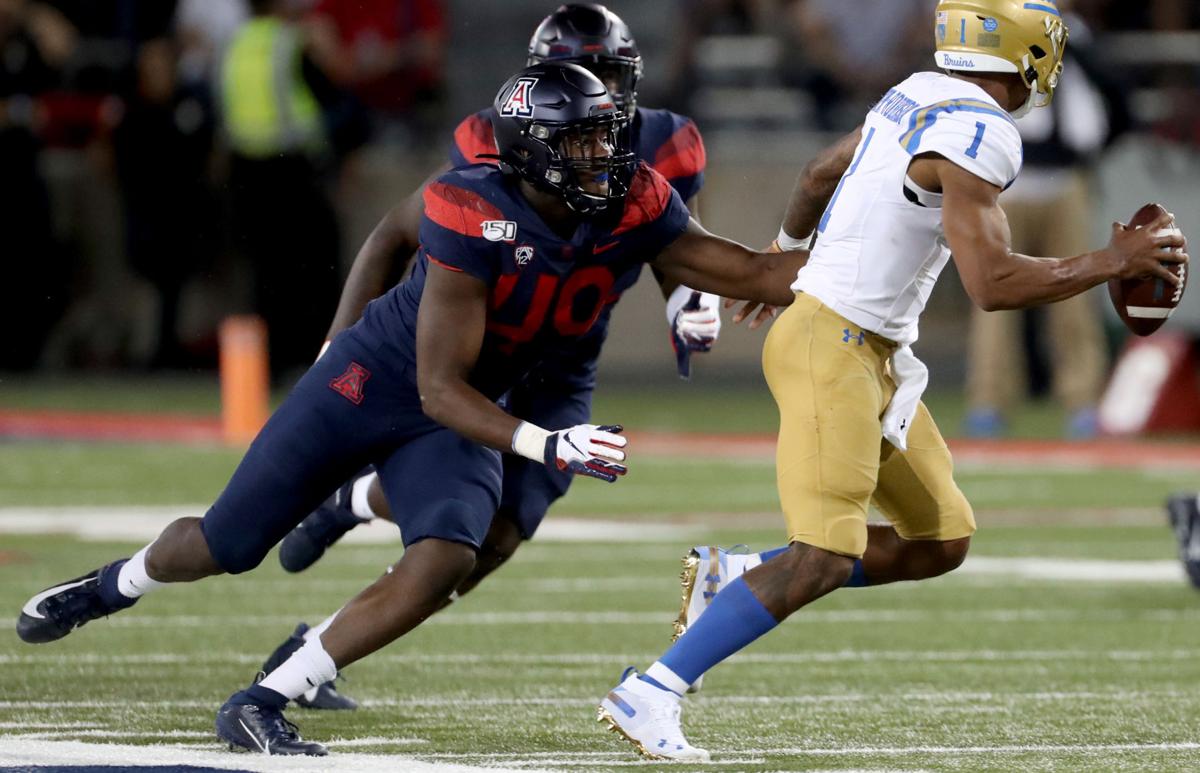 Arizona defensive end Jalen Harris (49) harries UCLA quarterback Dorian Thompson-Robinson (1) out of the pocket and into dumping the ball in the third quarter of their Pac-12 football game at Arizona Stadium, Tucson, Sept. 28, 2019. Thompson-Robinson ended up on the turf and left the game for good after the play. 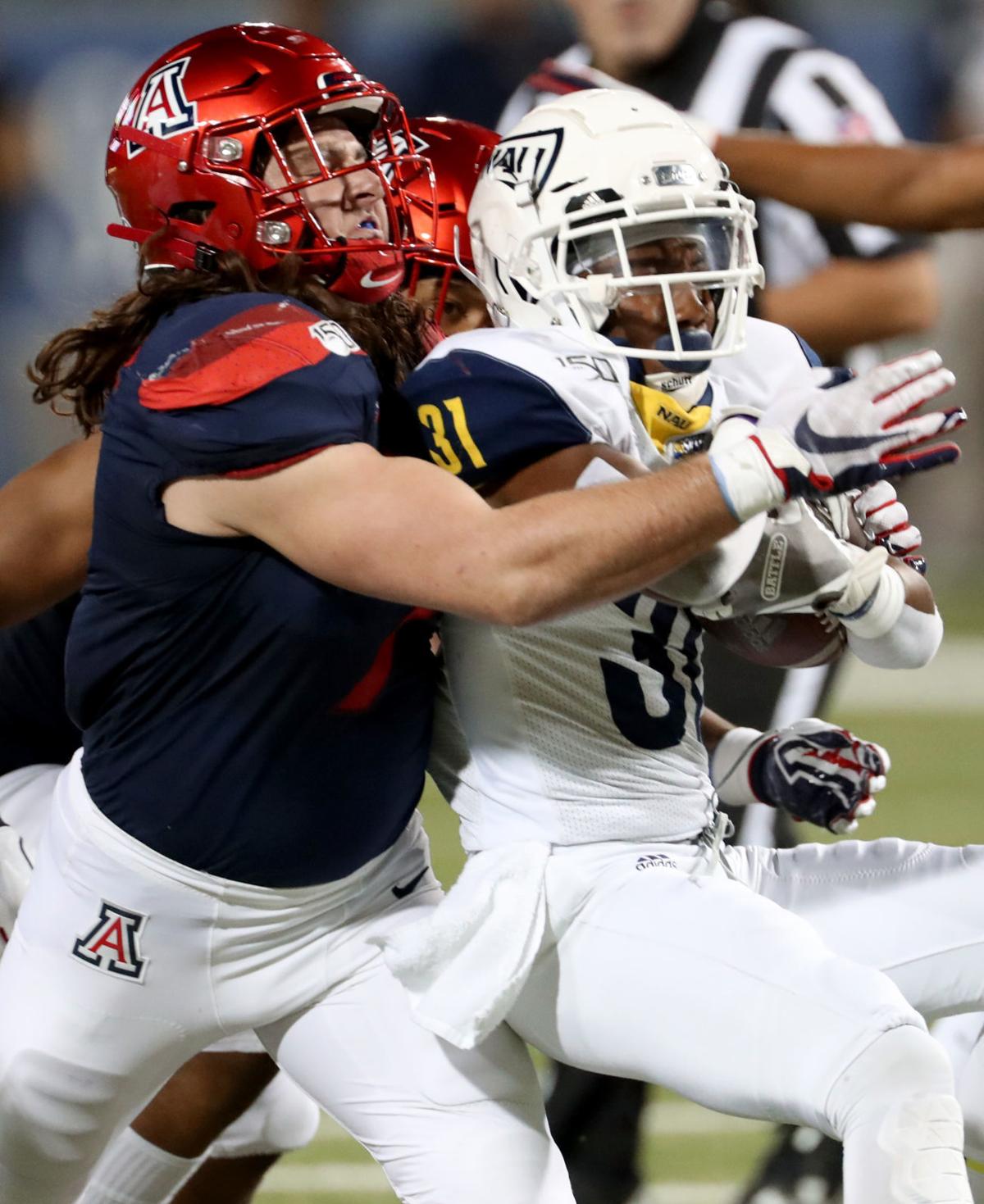 Colin Schooler, left, may be someone UA can build around on defense during his senior season in 2020. 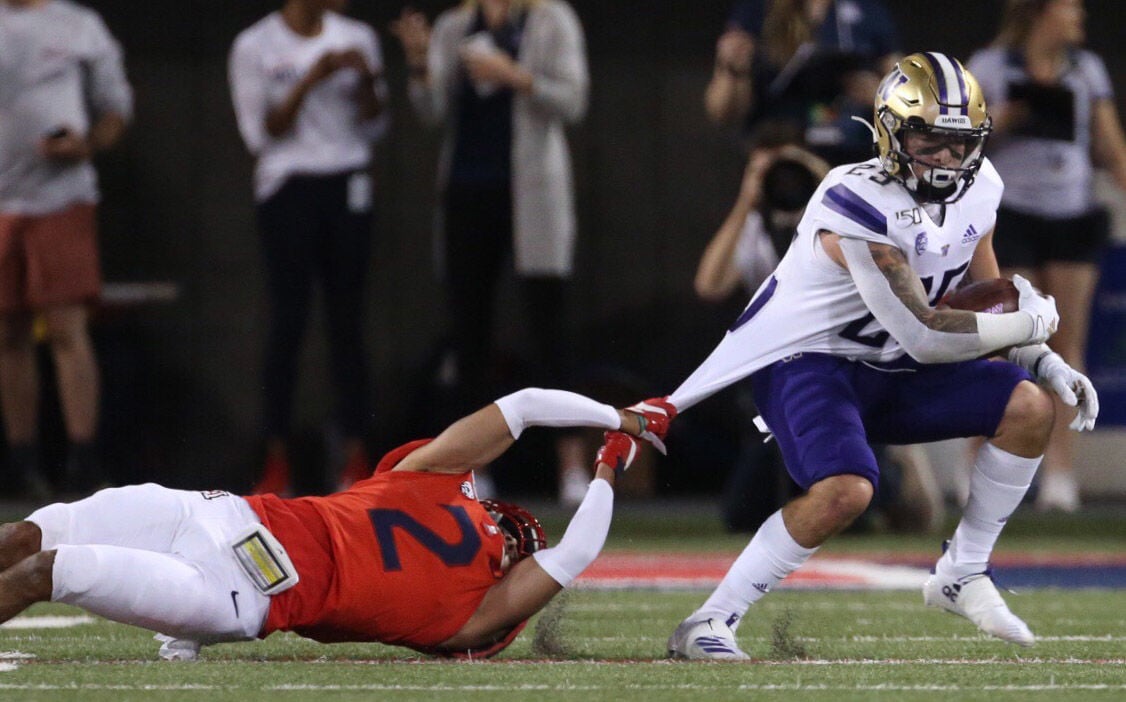 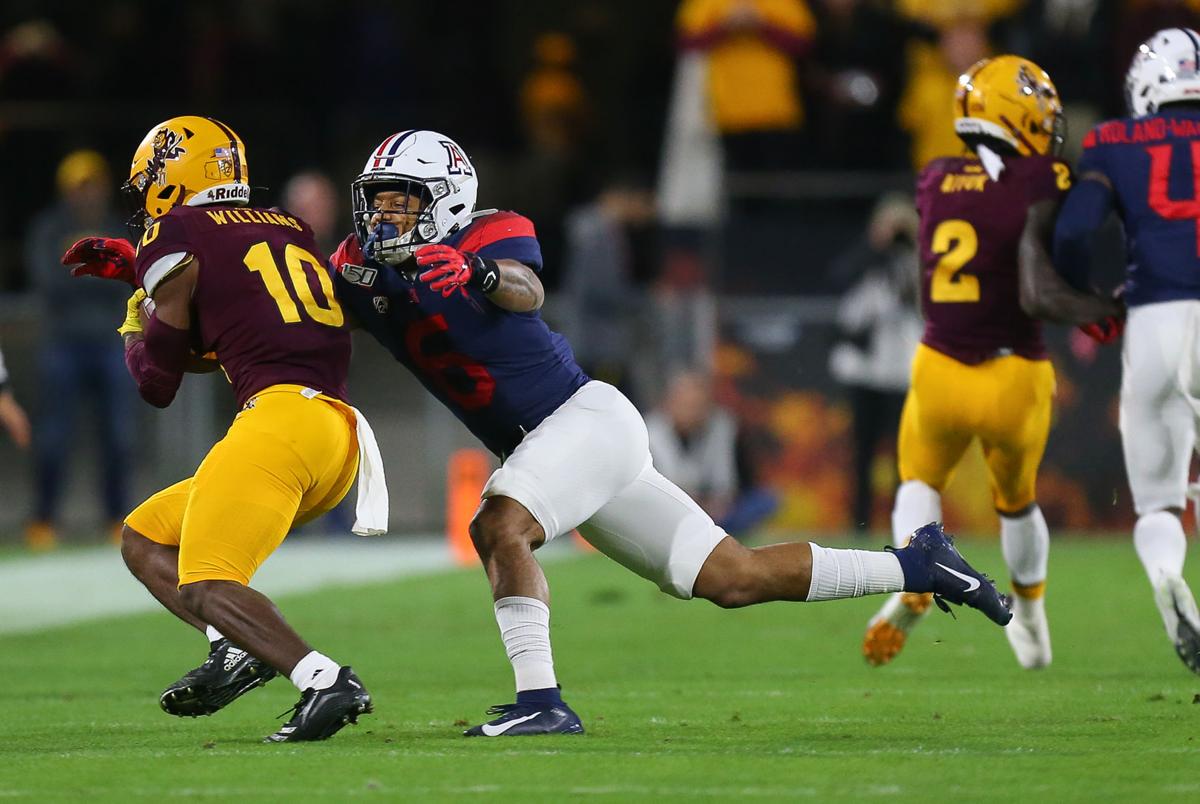 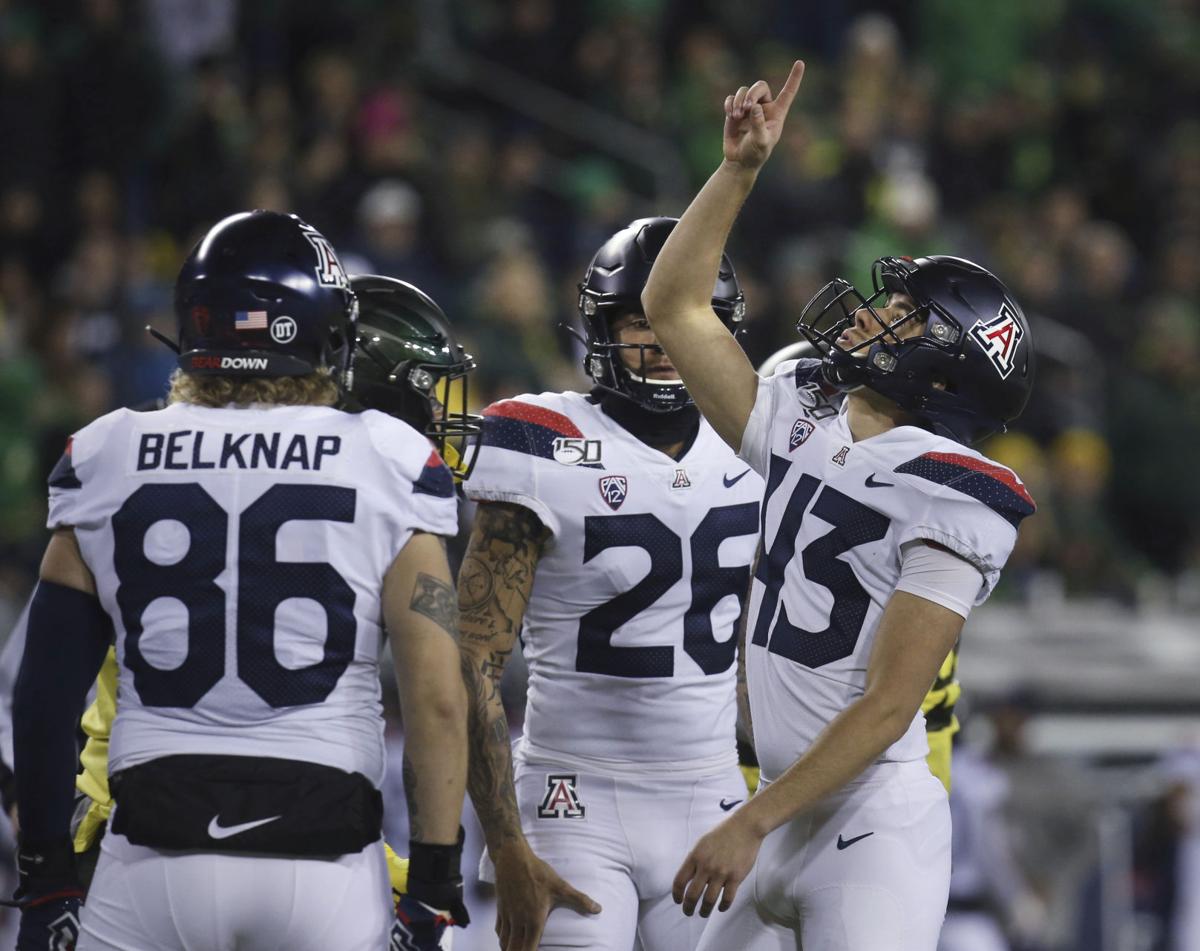