The Wildcats renovated the home locker room, added a fresh coat of paint to the upper deck of seats and, more notably, installed new turf worth $1.4 million.

Arizona hosts Mississippi State for its home opener Saturday night. The game kicks off at 8 p.m.

“We’ve really dressed up this grand stadium — Arizona Stadium. We’re excited about the future and we’re excited about Saturday,” Heeke said. “We’re looking forward to a big crowd and lots of excitement when we kick off the home opener in Tucson.”

The UA has been selling tickets for Saturday’s contest at a “hot pace” since last weekend’s season-opening win over San Diego State, Heeke said. More than 41,000 tickets were sold as of Thursday afternoon. Capacity at Arizona Stadium is now 50,600.

“I expect a very large crowd, which is very typical of (visits from) Southeastern Conference schools,” Heeke said. “They travel well.

Mississippi State fans are famous for ringing cowbells from the stands. However, the noisemakers won’t be allowed at Saturday night’s game.

The UA follows the Pac-12 guidelines, which prohibit “the use of artificial noisemakers or sound devices” at games.

UA: ‘We know what to do with crowds’

Arizona Stadium will be cashless and paperless for a second straight season.

Heeke said Thursday that he hopes to avoid what happened in last year’s home opener, where issues at the entry gates led to long delays entering the stadium. The issue was resolved for the following home games at Arizona Stadium and other home events on campus.

“From that point on, we didn’t have any problems the entire football through the entire basketball season. We know what to do with the crowds,” Heeke said. “We want people to arrive early, that can help. … We’re very confident we’ll handle the crowd in an efficient way for people to see the game.”

Fans are limited at two alcoholic beverages per person at the self-serve bar.

“It’s really good for game day,” Heeke said. “People can get back and watch the ballgame.”

Arizona Stadium has added a few items, including soft pretzels shaped like mustaches, buffalo chicken nachos, veggie bratwursts and a German-style bratwursts with sauerkraut. For the firsts time, the stadium will sell Sonoran hot dogs from El Charro.

“We had one scholarship available, and we were able to give it to him on that Friday evening. ... Hats off to him,” Fisch said. “Really what he’s shown is when he got here, although he chose to walk on, he was going to compete and do everything he possibly could to find his way on the field. He’s fast, he can catch, he’s big and he gives you a passing target. He has great hands and he’s built a trust with our players and with our quarterbacks.”

McLachlan transferred to Arizona from Southern Utah following the 2021 season, but was limited in the spring as he rehabbed an ACL injury. Fisch said McLachlan learned how to rehab an ACL injury via YouTube videos “because, at the time, he was between both programs.”

Since becoming healthy, McLachlan has a significant role in Arizona’s tight end group that features Alex Lines, who started 11 games last season for the Wildcats, star freshman Keyan Burnett — who is the highest-rated tight end to join the Wildcats since Rob Gronkowski — and 6-7 freshman Tyler Powell from Phoenix.

McLachlan caught one pass for 10 yards in Arizona’s 38-20 win over San Diego State.

“Tanner certainly deserved that scholarship, and I think he’ll continue to get better for us every day. ... It was so cool to watch. It was the last thing we said to the team prior to ending the team meeting on Friday evening, and it was a huge celebration by the guys,” Fisch said.

“They were all so happy for him, and they know how hard he’s worked at it. They know how much he loves being a part of the Arizona Wildcat family. The kids have done a great job embracing him, and he’s a real nice job.”

McMillan didn’t start on offense against San Diego State was because he’s part of the Wildcats’ punt return unit, along with cornerback Christian Roland-Wallace who also wears No. 4. McMillan wore No. 17 during Arizona’s punt return play, then quickly changed back into his No. 4 jersey. He wasn’t ready to go until the Wildcat’s second offensive play. Fellow freshman A.J. Jones started in place of McMillan.

Tight end Tanner McLachlan is now a scholarship player for the Arizona Wildcats.

Arizona defensive tackle Kyon Barrs spoke to media leading up to the Wildcats' home opener against Mississippi State on Saturday.

Cats Stats: Wildcats won third-down battle at SDSU; can they do it again vs. Bulldogs?

Arizona had a higher third-down percentage than San Diego State in the opener – a rare occurrence and one of the reasons the Wildcats prevailed.

Pac-12 Gambling Guide: There's money to be made on Wildcats, who are double-digit 'dogs vs. MSU

The betting public doesn’t think much of the Wildcats’ victorious opener at San Diego State.

Welcome to a special episode of Pac-12 After Dark, featuring host Arizona and the visiting Mississippi State Bulldogs, coached by air-raid off…

What to watch for when the Arizona Wildcats host Mississippi State

Three things to keep an eye on when the Cats face the Bulldogs in the home opener at Arizona Stadium (8 p.m., FS1). 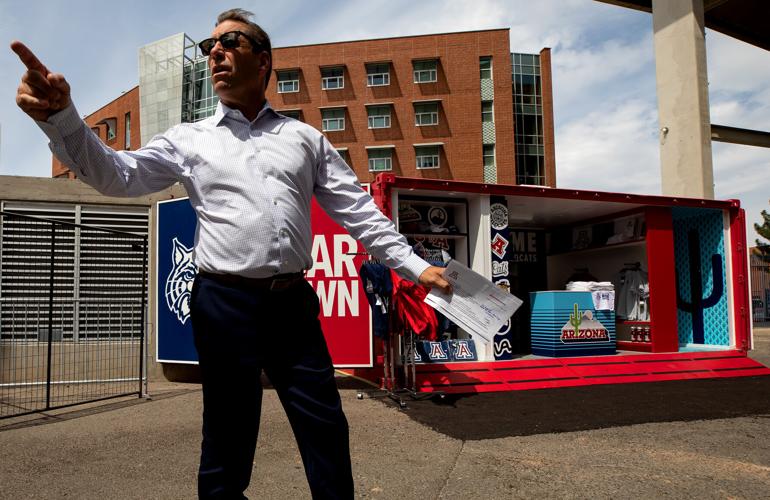