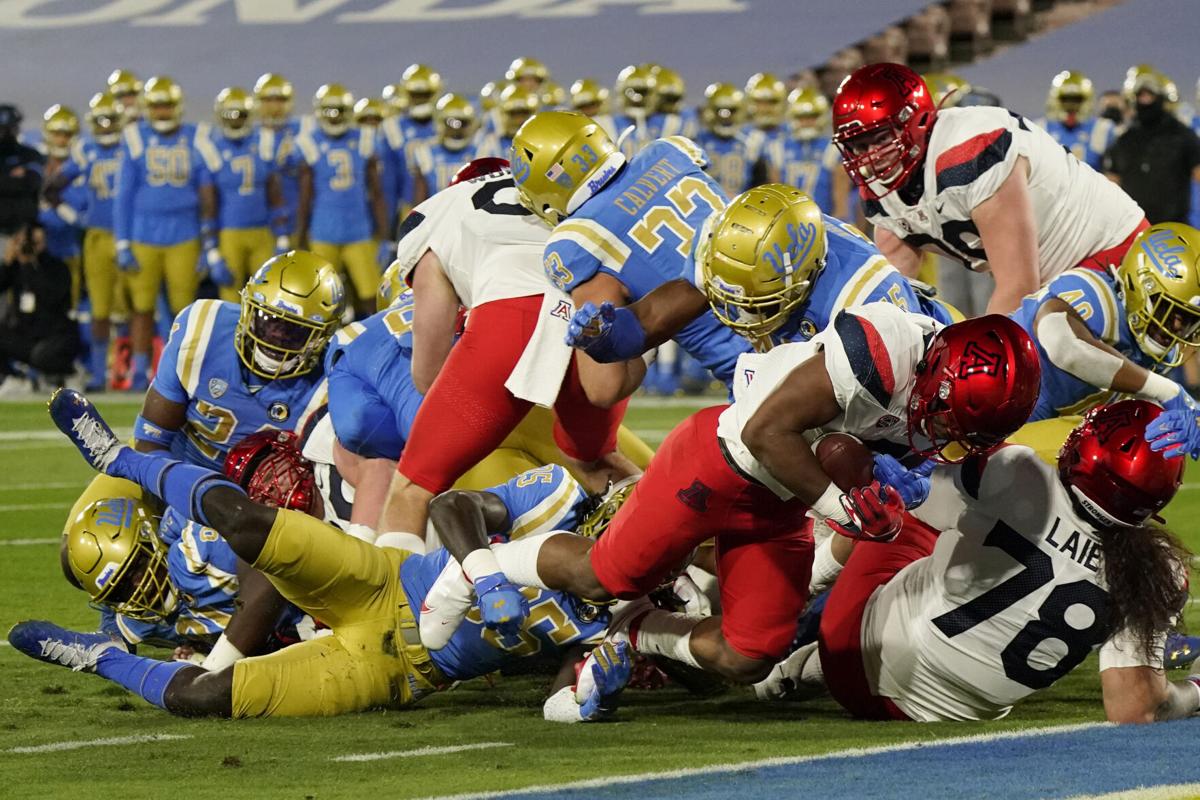 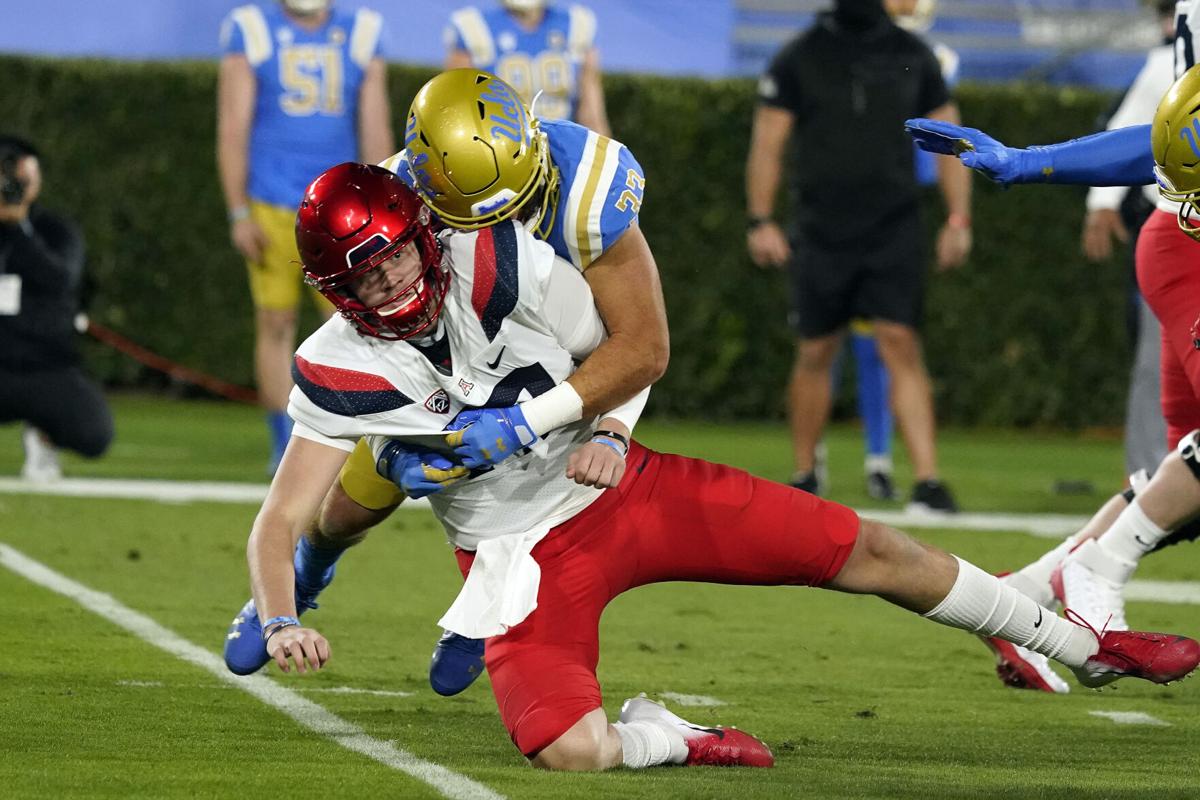 This time, at least, they battled.

The Arizona Wildcats lost their quarterback, fell behind but kept fighting. They had a legitimate chance to make UCLA sweat in the fourth quarter.

In the end, it wasn’t enough. The Cats fell to the Bruins 27-10 Saturday night at the Rose Bowl in Pasadena, California. The loss extended Arizona’s school-record skid to 10 games. The UA has dropped five straight on the road against UCLA.

"Everybody in that locker room is frustrated," said UA coach Kevin Sumlin, whose team fell to 0-3. "The overall message is, you gotta come back and you gotta go to work. You’ve gotta believe and trust in yourself and trust each other. The only way to climb out of this thing is to get to work and keep working.

"Some people, particularly defensively, at times did some good things. But we gotta find some consistency."

The game unexpectedly became a contest between backup quarterbacks when Arizona’s Grant Gunnell was injured on the first play from scrimmage. Freshman Will Plummer took over and led the Wildcats to an early lead that they couldn’t maintain.

Plummer, in his college debut, completed 17 of 35 passes for 151 yards with two interceptions. The Gilbert High School graduate also rushed 12 times for 49 yards.

Gunnell completed his lone pass attempt for 2 yards. The injury was to his right shoulder, Sumlin confirmed. Gunnell will be re-evaluated upon returning to Tucson. His status for next week's game against Colorado is up in the air.

"Right now I couldn’t tell you," Sumlin said. "We'll get back and talk with ... our medical team. We'll assess that tomorrow and throughout the week."

Although he was slowed for long stretches in the second half, UCLA’s Demetric Felton notched career highs with 32 carries for 206 yards before exiting with a leg injury late in the fourth quarter.

After looking leaky and fatigued in the first half, the UA defense stiffened in the third quarter. The Wildcats limited the Bruins to 36 yards and only one first down in the frame.

"We shut them down until that last drive," said linebacker Anthony Pandy, who had nine tackles. "Going into halftime, we realized our problem, why were down – we were missing tackles. We emphasized that, made our adjustments. ... We came out and played hard."

The UA offense also started to show signs of life, leaning more on its ground game, but the best it could manage in the third quarter was a field goal. Lucas Havrisik’s 26-yarder made it 20-10 with 1:15 left in the period.

After forcing a third straight UCLA three-and-out, Arizona again drove into scoring range. The Wildcats again had to settle for a field-goal attempt. This time, holder Jacob Meeker-Hackett bobbled the snap. He couldn’t get the ball down. Arizona came up empty at the end of a 14-play, 42-yard drive.

"You make the field goa,l and it's a one-score game with time left to have a chance to tie or win," Sumlin said. "Psychologically, that's difficult. But that's part of the game. You gotta fight through that."

Brittain Brown put the game away with a 2-yard TD run with 1:38 remaining.

The start of the contest was eventful to say the least.

On the first play from scrimmage, Gunnell got driven to the turf by unblocked blitzing linebacker Bo Calvert. Gunnell landed on his right shoulder.

Plummer entered and immediately scrambled for 26 yards. The drive stalled, but the struggling UA defense came up with a huge stop on the next series.

UCLA coach Chip Kelly decided to go for it on fourth-and-1 from the Bruins’ 25-yard line. Trevon Mason, Jalen Harris and others smothered Felton for a 3-yard loss.

After an alert recovery of a Gary Brightwell fumble by walk-on offensive lineman Tyson Gardner – a surprise starter at left tackle – Arizona scored the game’s first touchdown. Plummer’s 10-yard keeper set up Michael Wiley’s 3-yard TD run to give the Wildcats a 7-0 lead.

How rare of an occurrence was that? It marked only the fourth time in 13 road games under Sumlin that Arizona has held a first-quarter lead.

Arizona having to use an untested backup quarterback against UCLA isn’t unusual.

In 2018, Rhett Rodriguez made his first and only start when Khalil Tate was injured and couldn’t play. The Wildcats lost 31-30.

"Obviously, it had an effect," Sumlin said of having to insert Plummer for Gunnell. "There's always a learning curve there.

"With any situation like that, anywhere in the country, the starter gets the majority of the reps during the week. And then you do get a little handcuffed with a guy who is not getting that much, combined with (it being) his first real action."

The Bruins also played with a backup quarterback. Dorian Thompson-Robinson was unavailable for the second straight week because of COVID-19 contact tracing. Redshirt freshman Chase Griffin got the start. But it was mostly the UCLA ground game that offset the initial UA surge.

Two plays that conceivably could have been reviewed – and might have benefited the Wildcats – never went to replay.

In the second quarter, it appeared that Brown fumbled at the end of a run. Arizona’s Jaxen Turner emerged with the ball. But Brown was ruled down, and the Bruins ran a play before the previous one could be reviewed or challenged. UCLA ended up scoring a touchdown, on a pass from Griffin to Brown, to take a 10-7 lead.

"The fumble was under consideration," Sumlin said. "We didn't get it done, didn’t get it challenged."

Later in the quarter, Arizona appeared to have a first down on a pass from Plummer to Brian Casteel. But after catching the ball past the first-down marker, Casteel got pushed back. The officials marked the ball a yard short. On fourth-and-1, UCLA stuffed Plummer on a sneak and regained possession at the UA 43.

Six plays later, Felton scored from the 1 to bump the Bruins’ advantage to 17-7.

Although the Wildcats basically held serve in the second half, the outcome was the same. The players were as frustrated as ever afterward.

"Just because we're working so hard," receiver Jamarye Joiner said. "We work hard every week, day in and day out. We put in extra time, watch film. (We're) just not getting the result we want."

Arizona and UTEP may reschedule their canceled game Sunday.

The UA freshman is 0 for 4 from 3-point range after traveling from Tucson earlier in the week.

Trinity Baptiste, a Viriginia Tech transfer and the reigning ACC Sixth Player of the Year, is filling a void that could push the seventh-ranked Wildcats over the top.

Season openers can be misleading. But count Star columnist Greg Hansen among those who believe Brown’s Arizona debut is the real thing. He has the look of an all-conference player.

Sean Miller says he has his "fingers crossed" that Kerr Kriisa will be able to play for Arizona at some point.

The Star sports columnist highlights Salpointe Catholic's impeccable run to a volleyball state championship during the COVID-19 pandemic, Tucson's golf scene on national TV and the latest in college basketball.

Notes, quotes and stats from the Arizona Wildcats’ 27-10 loss to UCLA

Pertinent factoids, words and numbers from the Cats' setback against the Bruins.

Arizona's depth in the defensive secondary continues to take hits, after sophomore cornerback Bobby Wolfe announced he's opting out of the 2020 season.

In cooperation with the Pima County Health Department, the UA decided on Sunday to suspend admittance of student-athletes' parents and family members at home sporting events until further notice.

As of now, Arizona only has six scholarship defensive backs.

The Cats will face the Buffaloes at 5 p.m. at Arizona Stadium. The game will be televised by FS1.

Gunnell hurt his shoulder on the first play vs. UCLA. 'We'll see where he is,' Wildcats coach Kevin Sumlin said.