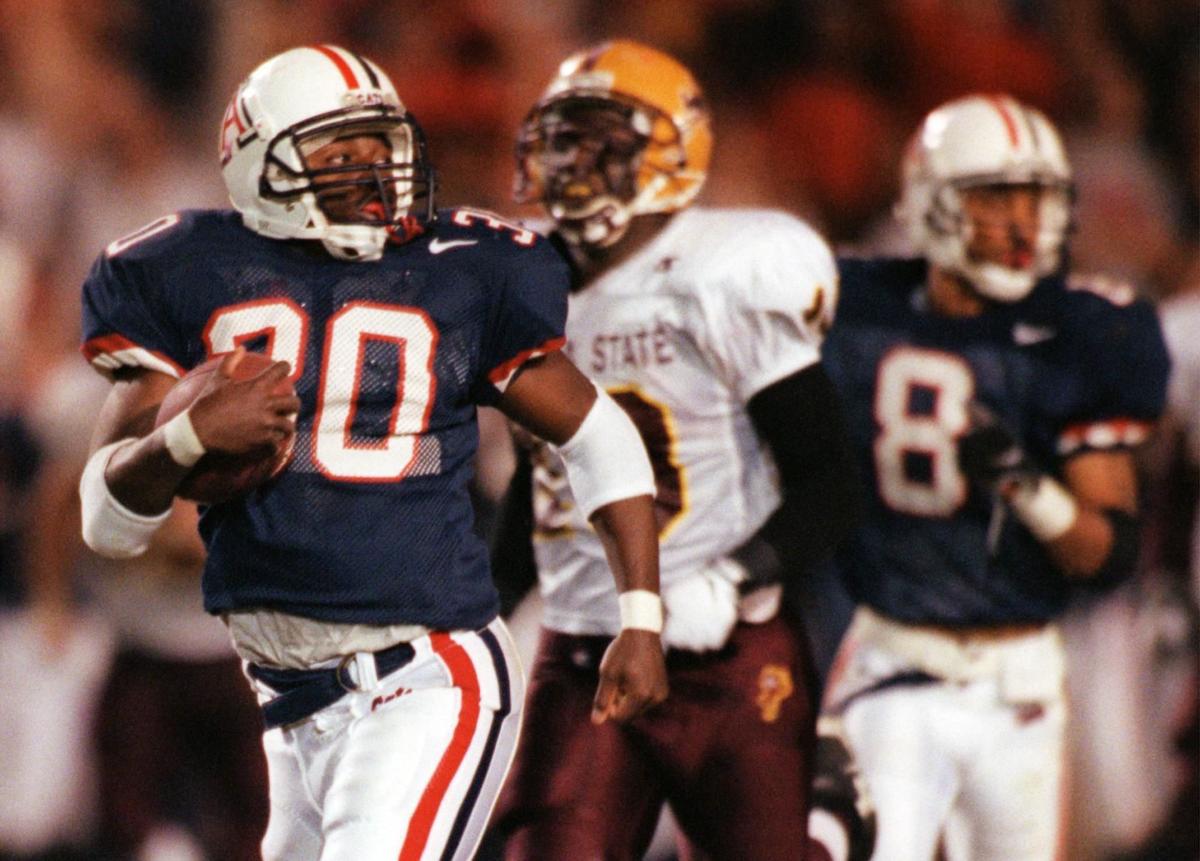 Trung Canidate looks back to see if anybody will catch him as he is off to the races for another touchdown against the Sun Devils in 1998. He rushed for 288 yards in the 50-42 win that day that seemed to clinch a Rose Bowl bid for UA — but a UCLA loss a week later changed that. 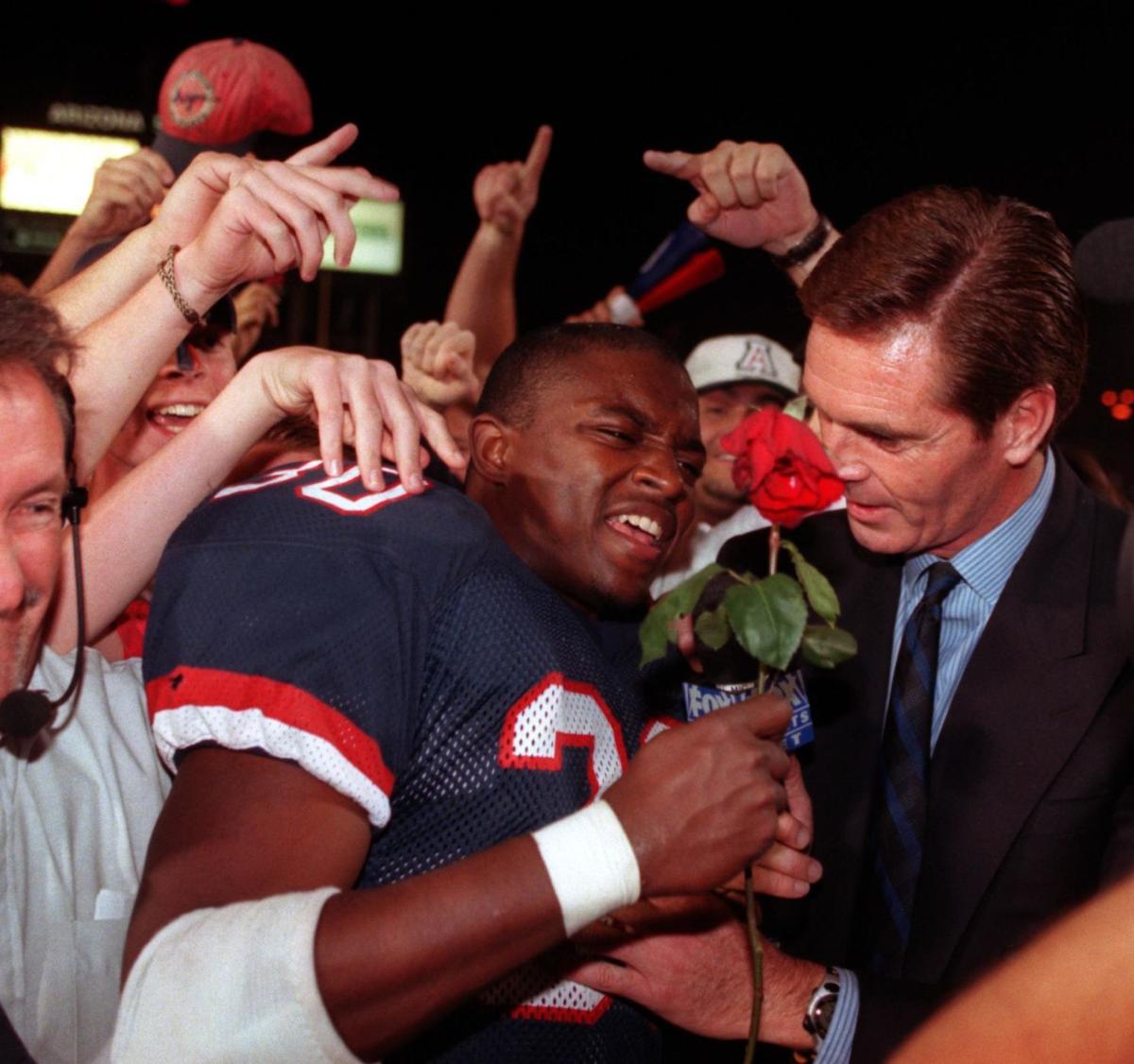 UA running back Trung Canidate is interviewed by a Fox Sports analyst after the Wildcats’ win over ASU in 1998, as Candidate clutches a rose in his hands with a hopeful appearance at the Rose Bowl.

He can still feel the thorns piercing the inside of his mouth, courtesy of roses that would never actually bloom.

The 1998 showdown between Arizona and Arizona State was no less exciting than Monday night’s slugfest between the Rams and Chiefs. This too went down to the wire, with the No. 7 Wildcats winning 50-42.

ASU quarterback Ryan Kealy had 511 yards and four touchdowns that day — and lost.

That morning, he says, he woke up with “hot feet.”

He’d go on to rush for a then-school-record 288 yards and three touchdowns, clinching the Pac-10 rushing title and, he thought, something even greater.

It has been two decades, and still the words leave a bad taste in his mouth. It’s not blood, but no less bitter.

“Sun Devils,” he said, pained, before sneaking in at least one “Scum Devils.”

Of all his most memorable college football contests, this is the one that sticks out.

He was a junior that season, and with the weight of the team on his sturdy shoulders, Canidate, now 41, could barely contain himself that day.

He could have very well been a Sun Devil himself. His younger brother, Cornell, would later become one.

A star at Phoenix’s Central High School, Trung Canidate starred on a team that floundered. The program was down all right — down to about a baker’s dozen players before his senior season — yet Canidate ran for more than 1,600 yards and 27 touchdowns and caught seven passes for 216 yards and four scores. The Sun Devils were on him, with assistant Karl Dorrell hot on his tail. But the Wildcats caught a break.

Dorrell was hired away by Colorado coach Rick Neuheisel, and the Buffaloes vied for Canidate’s services, too. But Canidate loved the family feel in Tucson, loved the defense, especially — he was thought to be a prospect on that side of the ball but was given a shot at running back by the coaching staff — and he wanted to stay closer to home.

The Wildcats had no idea what was coming. Canidate was the 96th-rated recruit in the West.

After starting back Leon Callen suffered a torn knee ligament in the spring of 1997, the sophomore took over and rushed for 911 yards and five touchdowns.

A foot injury cost Canidate three games that year and the season opener in 1998, but he roared back with a vengeance.

Heading into the regular-season-ending tilt against ASU, he had 932 yards, and he knew what was at stake.

“I tell you what, I don’t know if I was rushing for the Pac-10 rushing title, but I knew I was putting on a performance,” Canidate said. “Man, that game is so emotional, you just feel like you’re going to do … something … man. Just out of loyalty to the game.”

Keith Smith, who shared the UA’s starting quarterback duties with Ortege Jenkins, remembers thinking they were in for something special that day.

“I thought he’d go off against ASU going into that game and the reason was I knew he was from Phoenix, knew he had a lot of friends on that team, and he played with a chip on his shoulder,” Smith said. “I don’t remember him being a hyped-up guy. I remember him being mellow and focused with great attention to detail. He understands how to get north and south.”

North and south, and against the Sun Devils, east and west and slantways and backwards, maybe. Every direction, Canidate was there.

It comes up every year, Canidate said.

Even if he could move on from the best day of his football career, “they never let me forget it,” he says — meaning Arizona fans to whom Canidate became a hero.

And not just fans, either. Family, too.

The sibling rivalry is strong between Trung and Cornell, who played for ASU from 2002-05 and rushed for 622 yards in his career. Cousins who played for the Sun Devils, family friends, old high school rivals — this week, every year, they talk about the game.

Canidate’s closest friend on the ASU roster, safety Willie Daniel, was just a freshman at the time.

“He grew up in my house! My mother fed that man, and he took a cheap shot at me!” Canidate said, laughing heartily. “That’s the game, man. Every time I touched the ball — I never talked so much during a game, I wasn’t a talker — but I had family out there, you know. We still laugh to this day. He knew if we were even, I was leavin’. I just yelled at him all day, Willaaay!”

It wasn’t just that he rushed for 288 yards, shattering the former UA record by more than 50 yards.

It was how he did it.

Canidate needed just 18 carries to do his damage, breaking off touchdown runs of 80, 66 and 48 yards. He was poetry that day. Shakespeare with better shakes. Frost with a football. Third-and-Longfellow.

Despite Kealy’s herculean effort — 33-of-56 passing for 511 yards and four touchdowns against a normally stout UA defense — his last pass was batted down in the end zone, and the Wildcats prevailed.

For that day, the Territorial Cup might as well have been engraved with another T-C.

“I remember him handing him the ball, and he scores, and I run down to celebrate with him, and in the middle of the game, I just stop and say, ‘You’re the best running back I’ve ever seen in my life, Trung,’” Smith said. “I remember thinking, ‘Am I really watching this guy do this?’ What gets overlooked is the line was just kicking (butt), giving him these huge creases, and like he said, give him 18 inches of daylight and he was gone.”

The O-line may have been overlooked, but certainly not by Canidate. While everyone else on the team was planning the biggest party of their lives, Canidate was busy scrounging for change, bumming a few bucks off team managers.

“I was still trying to hustle up money to buy my offensive linemen some burgers from Burger King,” he said. “It doesn’t matter how good skill guys are if you don’t have the big guys willing to get out there and fight for you. It’s one thing to have them do their job. But when they really care about you, that’s different. I always understood that relationship was important. I mean, I was the best man in (guard) Yusuf Scott’s wedding. Me and him, we still hang out today. I understood for a team to work, you’ve got to have that personal touch.”

If the parties turned up that night — Whoppers and all — they barely compared to the following Saturday, with the regular season in the books.

That day, No. 3 UCLA, which beat Arizona 52-28 earlier in the season, would play a make-up game with Miami, clinch a berth in the national championship game and relegate the Wildcats to the Rose Bowl, no small consolation prize.

At least, that was the plan.

For a week, they were kings of Tucson.

“I’d go to Albertsons at 11:30 at night because I needed to do shopping, and if I went during the day, I would’ve had to sign 100 autographs,” Smith said. “It was awesome. I’m not going to lie to you.”

But seven days after arguably the biggest win in Arizona history, the Wildcats suffered their greatest loss.

“We had a big old party during that game, we thought it was a foregone conclusion,” Canidate said. “We felt we should’ve beaten UCLA ourselves. We knew how good they were.

“Now that I’m thinking about it today, they beat us twice that year.”

The Bruins, heavy favorites over the young but talented Hurricanes, entered the game 10-0, shoe-ins to vie for their first national championship in 44 years.

Then they met Edgerrin James, and the silver-grinned future Indianapolis Colts star torched them for a Canidate-like 299 yards in a 49-45 Miami win.

For Arizona, which would eventually head to — and win — the Holiday Bowl against lofty Nebraska, it was pure sadness.

“I still mess with Edge about that to this day,” said Canidate, who would join James in the NFL, though he’d only play four years and would finish his pro career with 1,095 yards and seven scores. “UCLA was supposed to dominate Miami. Edge is where I got my first bit of disappointment.”

For Canidate, even with the tremendous highs of his career — including arguably Arizona’s greatest Territorial Cup performance — the disappointment lingers.

“I think it stings a little more the older I get, when I realize we haven’t been to the Rose Bowl. Every time we get close, I think about it.”

He can taste it, even.

Cats Stats: Turnovers, home field and other factors that could decide the Territorial Cup

'He wants to be great': Arizona senior Shawn Poindexter continues his improbable ascent

Poindexter has gone from project to prolific touchdown scorer in his final season at the UA.

The Star’s panel of Michael Lev, Ryan Finley, Justin Spears and Dominic Baciocco takes its swing at the latest batch of power rankings, Thanks…

Greg Hansen: Cats would love to see the 2017 version of Khalil Tate against ASU

No man, woman or child was more divided by the rivalry.

The Wildcast, Episode 152: How does Arizona slow down N'Keal Harry, Eno Benjamin?

The wildlife camera will stream images of the birds after their nesting areas are closed in the next few weeks.

TEMPE — Arizona State sophomore Eno Benjamin sat at a podium in an interview room at Sun Devil Stadium moments after ASU polished off UCLA. He…

These 2019 Arizona Wildcats commits are still playing in big games

The Star's Justin Spears provides an update for four of the Arizona Wildcats' top commits in Kevin Sumlin's 2019 class.

What’s at stake in the Territorial Cup? Just a bowl berth and the perception of the ’18 season

The Wildcats and Sun Devils are out of the Pac-12 South race, but the success of Year 1 under Kevin Sumlin hinges on the Territorial Cup.

Former UA coach Dick Tomey joins ESPN Tucson on Nov. 23, 2018, to look back at some of the most memorable moments from the Territorial Cup riv…

Field Pass: Matchups, starters and who to watch for Arizona vs. Arizona State

Star reporter Michael Lev breaks down key matchups, strategy and starters for the Territorial Cup between the Arizona Wildcats and Arizona Sta…

Trung Canidate looks back to see if anybody will catch him as he is off to the races for another touchdown against the Sun Devils in 1998. He rushed for 288 yards in the 50-42 win that day that seemed to clinch a Rose Bowl bid for UA — but a UCLA loss a week later changed that.

UA running back Trung Canidate is interviewed by a Fox Sports analyst after the Wildcats’ win over ASU in 1998, as Candidate clutches a rose in his hands with a hopeful appearance at the Rose Bowl.