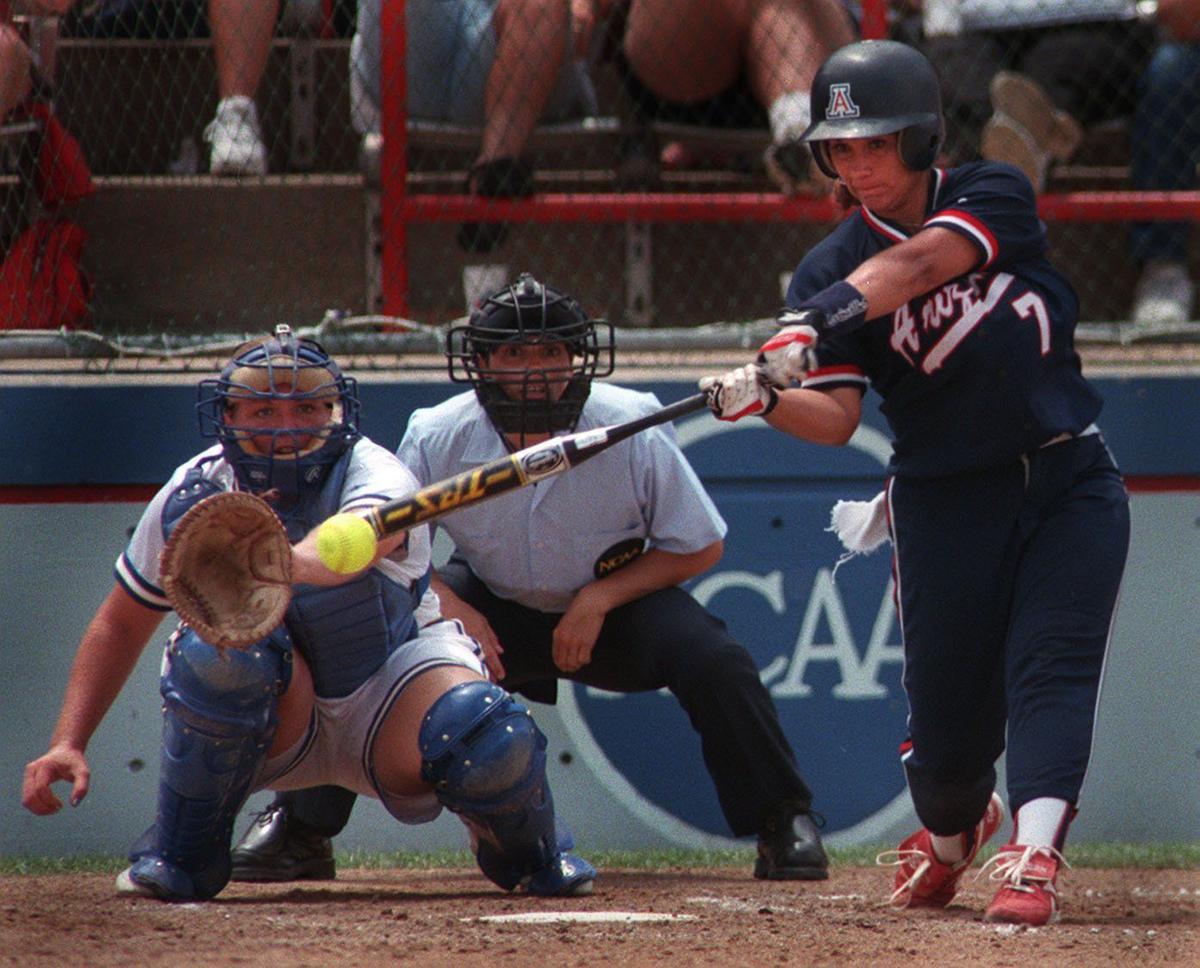 Lety Pineda hit .528 at Desert View High School, was an All-Pac-10 third baseman for the UA and went on to coach at Purdue, Creighton and Washington University of St Louis. 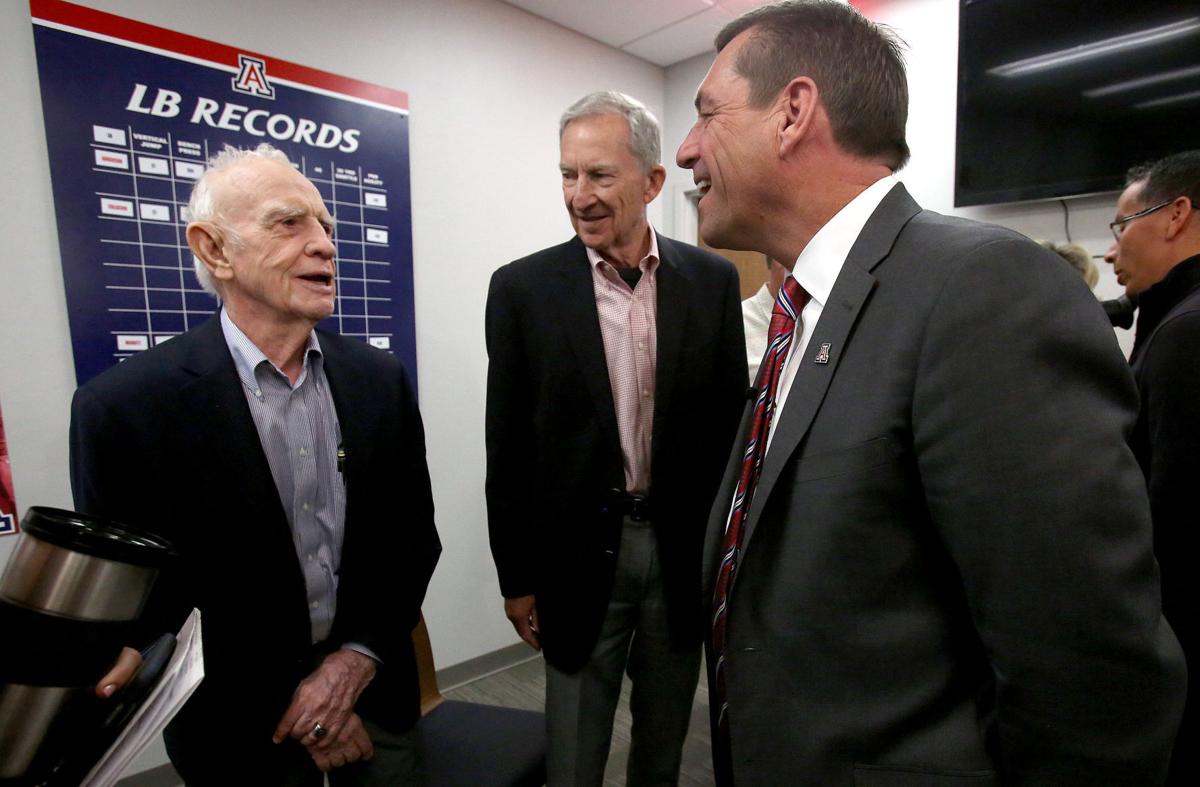 Star columnist Greg Hansen checks in this week with a fresh notebook, highlighting the Pima County Sports Hall of Fame's 2020 class, future of football in Arizona, UA football recruiting, and what one former Arizona AD said about the COVID-19 pandemic.

Pineda became a three-time first-team All-American at Arizona, helping the Wildcats to two NCAA championships. Ladd became the national Gatorade Player of the Year in 2002. Miller went on to set 12 Arizona soccer records and the school’s only Pac-10 Player of the Year.

On Saturday, Pat Darcy, president of the Pima County Sports Hall of Fame, announced that Pineda, Ladd and Miller have been elected to the Class of 2020, one of the deepest and most diverse in the 31 year-history of the PCSHF. They are tentatively scheduled to be honored in a banquet at the DoubleTree Hotel on Nov. 1, although given uncertainties of the COVID-19 pandemic, there’s a possibility the Class of 2020 will be rolled over to the Class of 2021.

The UA Sports Hall of Fame, which planned to induct seven members to its Class of 2020 on Aug. 28, is also uncertain about its banquet plans.

Although Roth never qualified for the PGA Tour, he did play two years on the PGA Tour Champions circuit and, back on his home turf in Michigan, won 17 sectional PGA “majors.” Roth has become a noted instructor both in Michigan and Farmington, New Mexico.

Last week, Roth qualified for the ongoing PGA Championship via the Michigan PGA Section and shot rounds of 74-75, missing the cut, but putting a crown on his long golf career. At 61, Roth was the oldest player in the PGA Championship, but acquitted himself well.

You could almost see it coming. Kate is the daughter of Suzy Mason, a former Cornell University basketball player. Suzy is the senior associate athletic director for event management/facilities at the UA. A year or so ago, Mason told me she had become a “softball mom.” It paid off.

The Masons are part of a small but select group of UA athletic administrators/coaches whose children have gone on to play Division I sports. Here’s the list in modern UA history:

Did I omit someone? Please let me know.

Wildcats have the numbers for 2021, but is there talent?

Not to diminish the recruiting efforts of UA coach Kevin Sumlin and his football staff — the Wildcats have commitments from 15 three-star recruits and four two-star prospects for the Class of 2021 — but Snow College offensive lineman Cade Parrish committed to Arizona last week. He had offers from Weber State, Western Illinois, Liberty, Hawaii and San Jose State. My brother, Mike, was the athletic director when Parrish played for Logan High School a few years ago. I asked Mike if Parrish is a solid prospect. “I don’t recognize that name,” he said, initially. Mike later said he did remember Parrish at LHS, but could not recall his football career.

Is ASU's backcourt the most lethal in decades?

Arizona State basketball coach Bobby Hurley’s returning backcourt of Remy Martin and Alonzo Verge — both withdrew from the NBA draft recently — seems certain to be the Sun Devils’ most feared guard line since future NBA All-Stars Fat Lever and Byron Scott led ASU to a 16-2 Pac-10 record in 1981. Some might include the James Harden-Derek Glasser backcourt of 2009, but then-ASU coach Herb Sendek didn’t get the maximum out of Harden, putting him in a share-the-ball system that resulted in ASU finishing just 11-7 in the Pac-10 and winning just one NCAA Tournament game in two years. This season’s ASU team projects as a Pac-12 co-favorite with UCLA, although the top of the league figures to be a battle between Oregon, Stanford, ASU and UCLA.

In the past few days, UConn shut down its football program for the rest of 2020 and the Mid-American Conference did the same Saturday. The dominoes fall. If the MAC and its 12 presidents don’t feel it’s safe to play football this fall, how can Tucson’s high school football teams — with nowhere near the resources to track an athlete’s health and safety — reasonably move toward two-a-day practices in a few weeks? Chances of a prep football season in Tucson this fall?

I put it at 0.003%. But there’s always a chance: Real Salt Lake, part of Major League Soccer, announced Saturday it will allow 5,000 people in the stands at Rio Tinto Stadium for games that begin Aug. 26. That’s quite a contrast to college football’s growing momentum to cancel the 2020 fall season; the Power 5 Conference schools could soon follow the MAC. The MAC’s football shutdown immediately affects the Arizona Bowl at Arizona Stadium, scheduled for the last week December.

The MAC was to play the Mountain West Conference’s No. 2 team this year, part of the Tucson bowl game’s new contract. By this time next week, it wouldn’t be a shock if the MWC was shut down as well.

Maybe 'whistleblower' hotline should be implemented in college sports?

The NFL and NBA have implemented so-called “whistleblower” hotlines in attempt to get players and staff members to anonymously report those who violate health and safety procedures and don’t adhere to strict day-to-day, off-field protocols. The tip lines would’ve helped Louisville’s men’s soccer team and Colorado State’s football team avoid national headlines last week. Louisville dismissed three soccer players from the team; CSU’s football program is now on pause during an investigation. The sooner Arizona and the Pac-12 create tip lines, the sooner they might avoid similar missteps.

My two cents: College sports could sure use Ced Dempsey now

Last week I asked former Arizona athletic director and NCAA executive director Cedric Dempsey if his 50 years in college sports administration ever produced a crisis to compare to the COVID-19 shutdown.

“Nothing could come close,” he said. But it’s not like Dempsey, now retired and living near San Diego, couldn’t write a very long book about crisis management.

After leaving Tucson early in 1994, Dempsey’s first major issue as leader of the NCAA was a showdown with prominent Black basketball coaches John Thompson of Georgetown, John Chaney of Temple, George Raveling of USC and Nolan Richardson of Arkansas. It was during a sensitive period in which Thompson walked off the court before a Georgetown-Boston College game protesting the NCAA’s newly-created Prop. 48 rule about academic eligibility. The coaches claimed that the rule discriminated against Black athletes.

“It was very serious, as you might imagine,” Dempsey remembers. “We had a mediator in the room. One of the women on our executive staff left the room in tears.”

Ultimately, Dempsey and Thompson reached an accord and developed a healthy relationship. Dempsey worked to change the dynamics of the NCAA staff, improving minority employee numbers from 8%to 24%.

This would be a good time for a man like Dempsey to be calling the shots in the Pac-12, or at a Power 5 conference.

After the Pac-12’s #WeAreUnited unity group meet in a Zoom conference with Pac-12 commissioner Larry Scott last week — the group of football players asking for improvements in health, safety, racial equality and economics — ESPN reported that Scott was dismissive. It reported that a unity group football player said “we are deeply concerned that (Scott) isn’t taking this matter seriously.”

This appears doomed for an attorneys vs. attorneys battle, and not a give and take on both sides as Ced Dempsey and John Thompson proved was a better way to solve a problem 25 years ago.

New policies by the Arizona Interscholastic Association including guidance for team travel, the pregame coin-toss, sideline behavior and equipment use.

Guest opinion: Every day is National Baseball Card Day for a father and son who bond over boxes

Baseball cards, while always present in Tom and Mac Tronsdal's home, have taken on a new significance during the coronavirus pandemic.

Through the kindness of friends — and the power of Ebay — cards have been steadily filling their house since the COVID-19 shutdown began.

Greg Hansen: Former Wildcat Bobby Brown pens riveting tale of overcoming the bench, winning a ring and getting the girl

The Arizona Wildcats' College World Series champion has a new book detailing his preseverence on the Wildcats' bench.

Lety Pineda hit .528 at Desert View High School, was an All-Pac-10 third baseman for the UA and went on to coach at Purdue, Creighton and Washington University of St Louis. 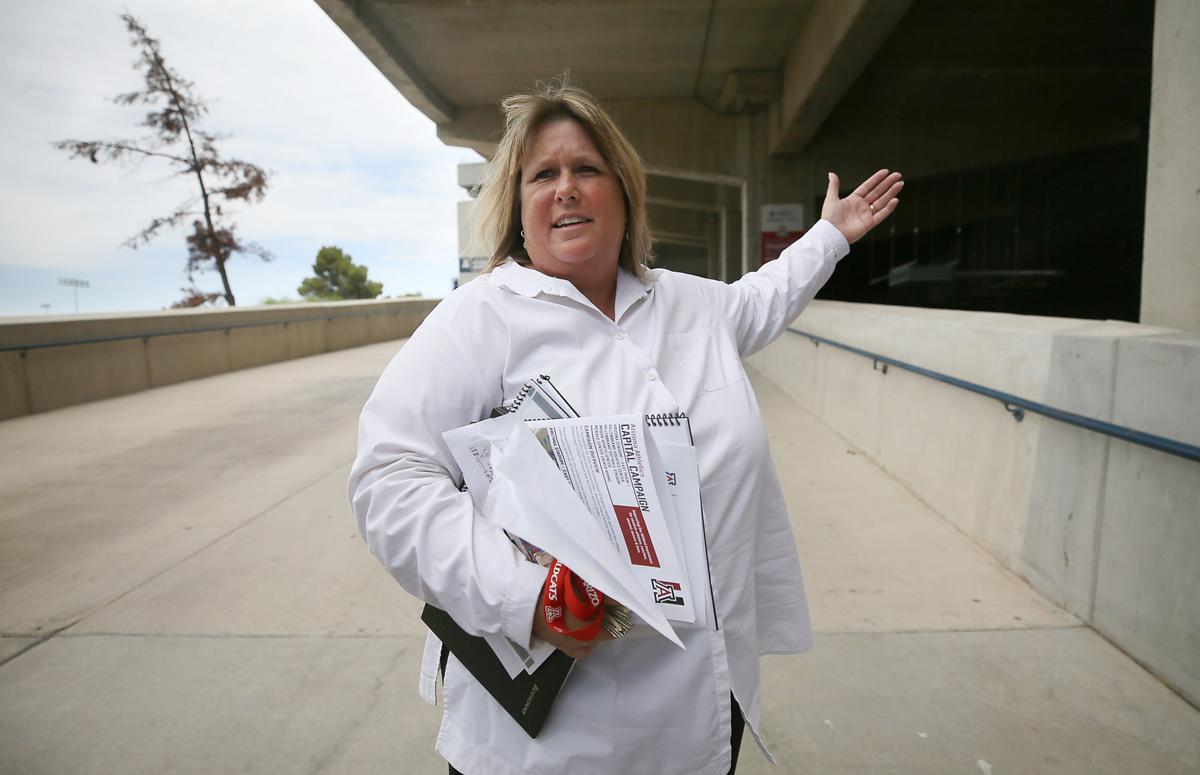 Suzy Mason, senior associate athletic director for event management and facilities at the University of Arizona, leads a tour of the construction projects in progress within the athletics department on July 26, 2018. 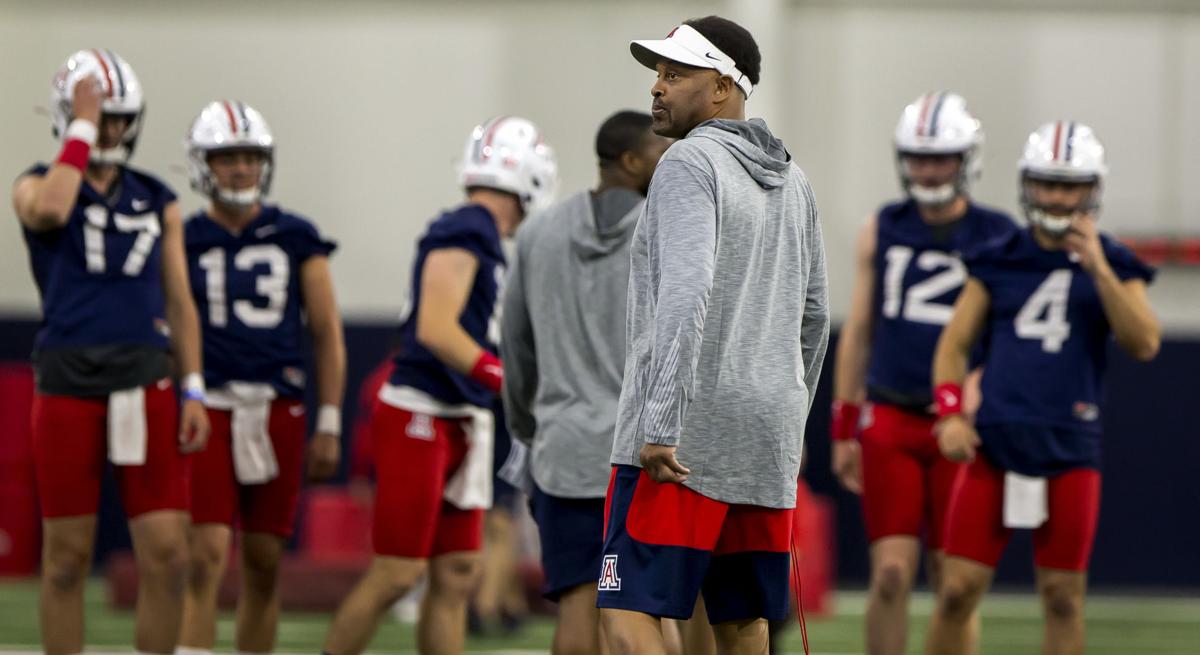 Head coach Kevin Sumlin notes that the Wildcats got in four spring practices. “People forget about that. Some people didn’t have any.” 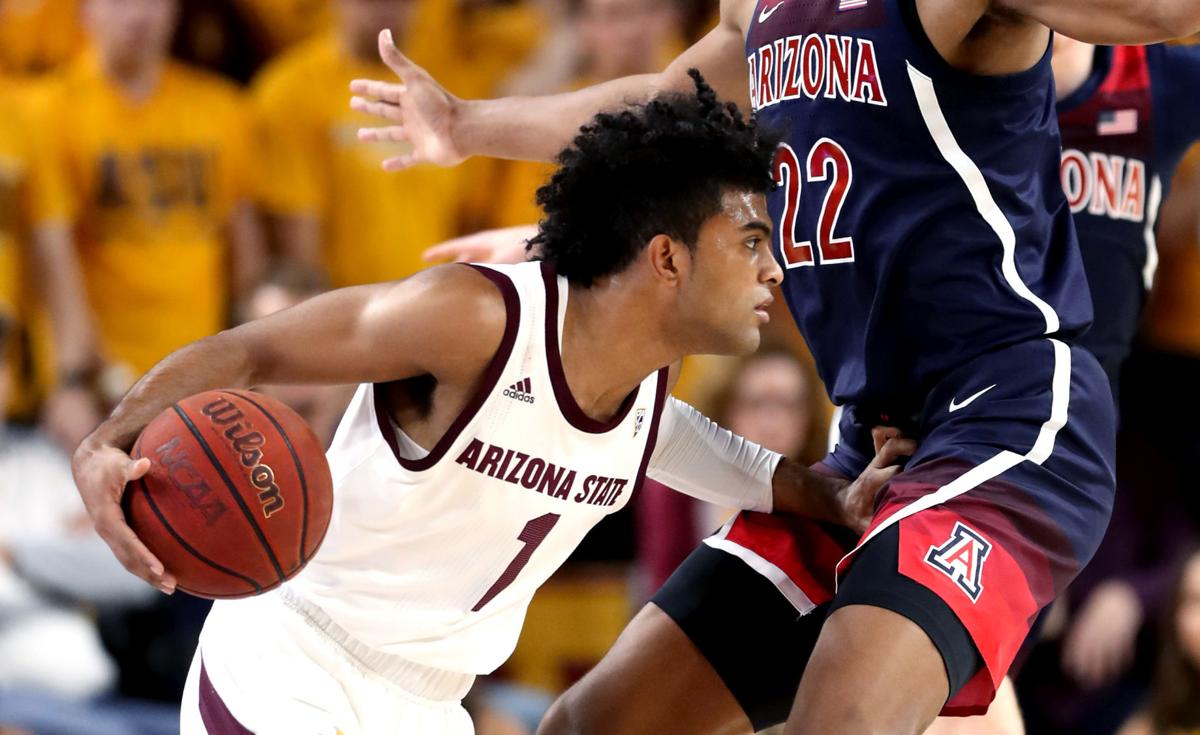