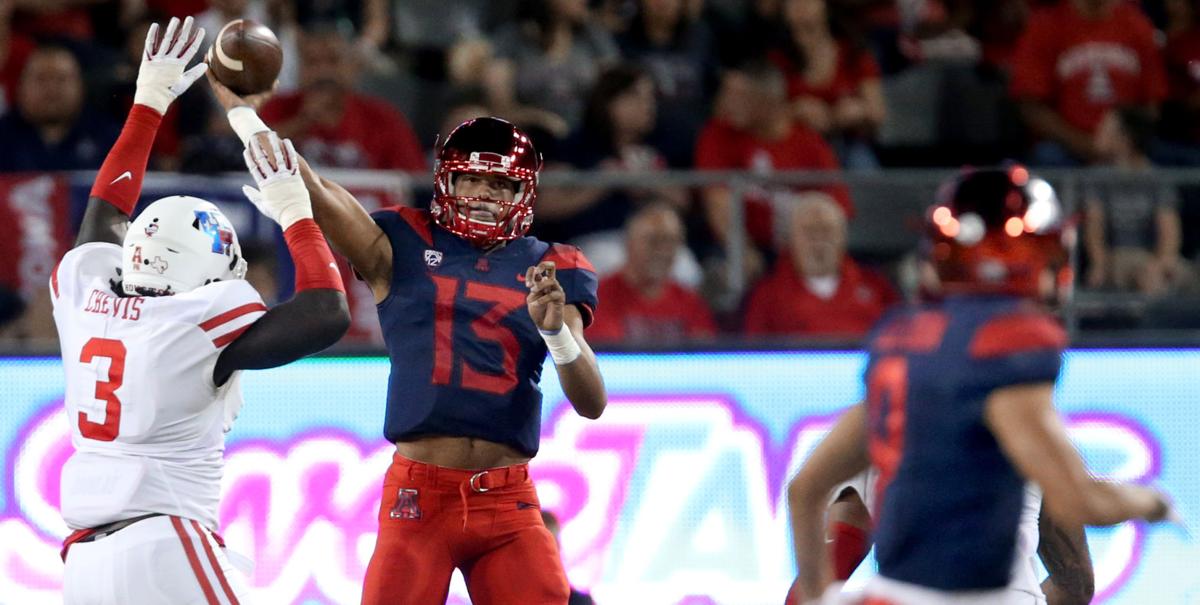 UA quarterback Brandon Dawkins says: “Nobody’s a harder critic of myself than myself. But you’ve got to look past it.” He had three interceptions and a fumble against Utah last week. 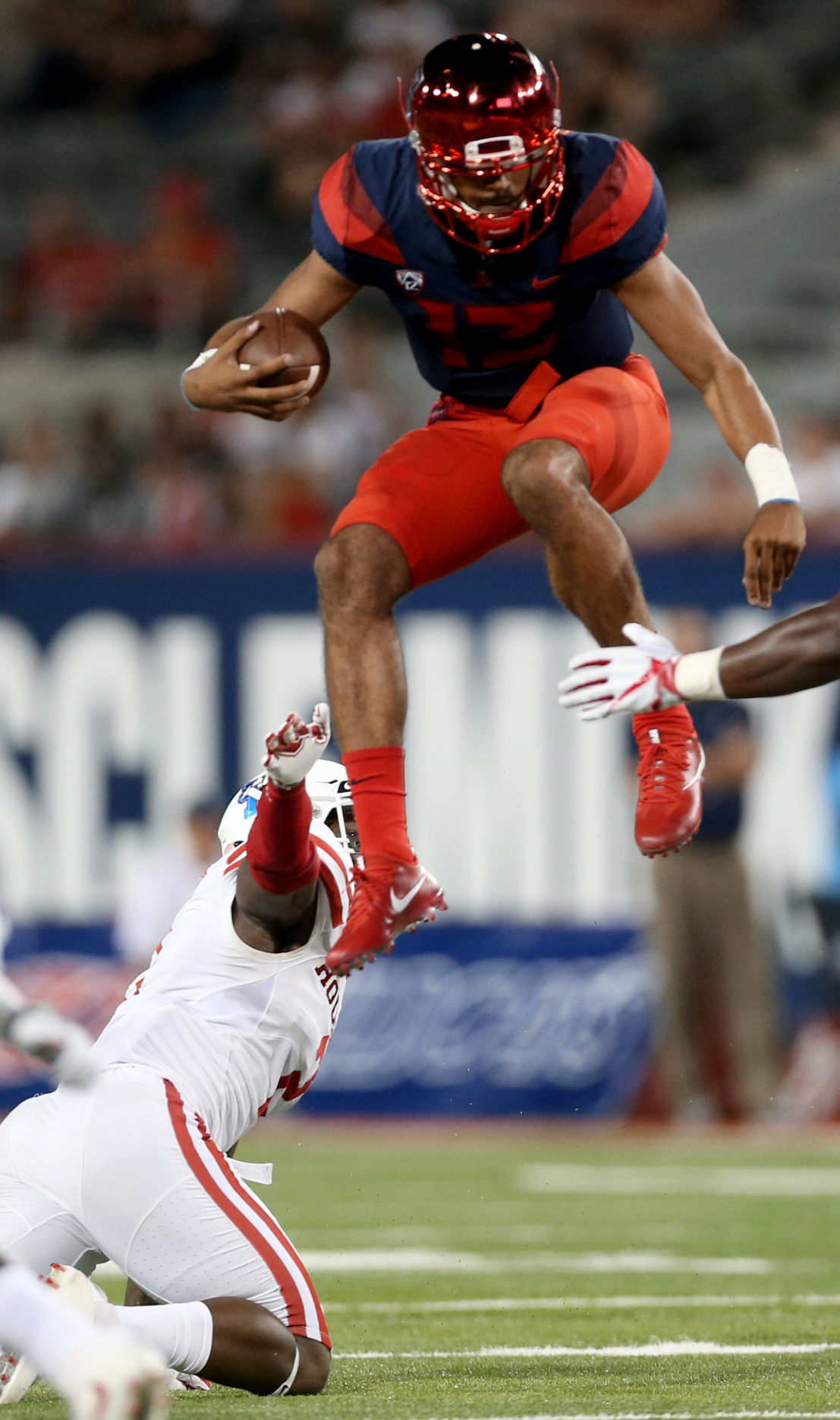 Dawkins, hopping over Houston safety Khalil Williams in last week’s game, was replaced for two series before being reinserted for the final drive, which sputtered out.

The quarterback conversation in football is never-ending. Tucson is no exception.

Since Saturday, everybody who cares about the Arizona Wildcats has been talking about Brandon Dawkins. Most of the discourse hasn’t been complimentary.

If the fans had their way, Dawkins no longer would be Arizona’s starting QB. In a Twitter poll asking who should start at UTEP on Friday, backup Khalil Tate garnered nearly 60 percent of the 700-plus votes. When the starter isn’t performing, the No. 2 guy is always the most popular man in town.

About 13 percent of the voters picked Dawkins — roughly the same as who picked untested freshmen Rhett Rodriguez and Donavan Tate.

UA coach Rich Rodriguez doesn’t see it the same way. He is sticking with Dawkins for at least one more week. Rodriguez believes Dawkins has greatness in him, even if the masses don’t.

Asked about Dawkins’ hot streak against Houston in the third quarter, when he completed 6 of 7 passes for 75 yards, Rodriguez said: “That’s what’s expected. We’ve seen it in practice. We see it all the time.”

The problem is, no one remembers Dawkins directing the Wildcats from their 14-yard line to the Cougars’ 4. They remember his back-to-back fumbles on the two offensive plays preceding that drive — and his third-and-goal overthrow of Tony Ellison in the end zone that punctuated it with an audible groan.

The fans at Arizona Stadium let their feelings be known then and late in the fourth quarter, when Rodriguez reinserted Dawkins after lifting him for Khalil Tate for two series. Arizona failed to get a first down and lost 19-16.

The booing was nothing Frank Dawkins hadn’t heard before.

“We’ve been doing this QB thing since he was 8 years old,” Dawkins’ father said by phone this week. “It’s nothing new. It’s a difficult job for a parent and a kid.”

Frank Dawkins spoke from his home in Oxnard, California. He was in attendance for the Houston game and plans to be in El Paso to support his son. He understands why the fans are frustrated.

What they don’t always appreciate is that Brandon Dawkins desperately wants the same thing — at times to his own detriment.

Dawkins injured his throwing hand in the first quarter of the Houston game; it was swollen and wrapped in ice afterward. Dawkins also had ice on his shin and back, the latter after taking a hard hit from Cougars linebacker Matthew Adams on the play before the overthrow of Ellison.

Dawkins said he thought about tapping out, but the competitor in him told him to keep playing.

Brandon Dawkins’ belief in himself hasn’t wavered, his father said. Asked if it seemed as if Brandon was pressing at times against Houston, Frank said: “He wants to make the play every time.”

Again, that sometimes works against him. On Arizona’s final offensive play, a fourth-and-13, Dawkins tried to run for the first down. He got tackled 7 yards short.

No Wildcat has expressed that sentiment publicly. Nor has Rodriguez. He cited Dawkins being “a little nicked up” as the main reason for pulling him in the fourth quarter.

Khalil Tate also was banged up, having hurt his throwing shoulder the previous week. (Just Arizona’s luck, right?) Tate shook his arm, as if trying to loosen it, between plays against Houston.

If Tate were fully healthy — and had led the Wildcats to a comeback victory — would Rodriguez have made a permanent change? It’s impossible to say.

Dawkins and Tate competed for the starting job throughout the offseason. Dawkins had the advantage in experience. He started nine games last season and led Arizona with 944 rushing yards and 10 touchdowns. His passing performance deteriorated after a strong start. Injuries, including bruised ribs and a concussion, again were an issue.

Tate began last season as a 17-year-old freshman. He wasn’t expected to play, but Rodriguez had no choice when Dawkins and veteran Anu Solomon both got hurt.

The degree to which Tate closed the gap on Dawkins in the offseason is unclear. But when it came time to select a starter, Rodriguez chose Dawkins.

Frank Dawkins views that decision as validation. If his son is incapable of throwing the ball consistently well, as many have concluded, why would Rodriguez pick him?

“To say he can’t pass — it is ridiculous,” Frank said of Brandon. “RichRod sees it every day in practice.”

Consider, too, that Rodriguez might be coaching for his job.

“RichRod wants to win,” Frank Dawkins said. “He’s going to go with the guy that gives him the best chance to win. If he thought that wasn’t Brandon, Brandon wouldn’t be playing.”

Although it may not be evident from his sideline behavior, Rodriguez has more patience than the fan base. But everything has its limits.

Rodriguez described the development of the quarterbacks as “an ongoing process.” That’s quarterbacks, plural.

“I’m going to stay on them,” Rodriguez said. “Our expectation for our guys, all the quarterbacks, is for them to be not good but great. They have the talent to do that, so we’ll keep working.”

That’s precisely Brandon Dawkins’ approach. Healed enough to practice Sunday, he focused on fundamentals, a process he depicted as “back to square one, building it from the ground up, feeling really good about everything.”

“I’m far from a finished product,” the fourth-year quarterback said. “I just gotta put (my) nose back down to the grind and just get back to work.”

How have the Arizona Wildcats done with four-star recruits under RichRod? Not well.

UA wants 'best guys' for program regardless of recruiting ranking.

The redshirt freshman has a unique ability to see – and exploit – openings that others can’t see.

RichRod on Arizona Wildcats’ QB play: ‘We’ve got to get better in a hurry’

The UA coach is well aware of the team’s ongoing struggles in the passing game and knows they have to be fixed sooner than later.

Watch: Hansen on why he’ll buy a Kerr T-shirt, and why Indians streak is the real deal

Greg Hansen answers rapid-fire questions about the sports world inside and outside of Tucson.

Watch: Hansen on Arizona’s QB controversy, why Friday’s game is a must-win

Greg Hansen and Ryan Finley discuss why Brandon Dawkins and Khalil Tate are fighting for a starting job, and what needs to happy when the Wild…

Star columnist checks in with his thoughts on Friday's game against UTEP.

Here's a look at what Star reporters Michael Lev and Zack Rosenblatt are talking about as the team travels to Texas.

A very special episode where Greg, Zack and Michael chat during their road trip to El Paso for Arizona's Friday night game at UTEP. The guys d…

The best Arizona Wildcats tweets of the week, pre-UTEP edition

Here's a look at the most important, interesting and informative tweets of the week.

Notes and takeaways from warmups before the Cats-Miners game at the Sun Bowl in El Paso, Texas.

The Arizona Wildcats beats UTEP 63-16 Friday night in El Paso, wrapping up their nonconference slate with a 2-1 record.

UA quarterback Brandon Dawkins says: “Nobody’s a harder critic of myself than myself. But you’ve got to look past it.” He had three interceptions and a fumble against Utah last week.

Dawkins, hopping over Houston safety Khalil Williams in last week’s game, was replaced for two series before being reinserted for the final drive, which sputtered out.