Kamaile Hiapo jumped in and never looked back as a freshman.

She put her stamp on the Arizona volleyball program in many ways. From the very first match, she was in the record books as the first freshman to start at the libero position.

Hiapo was the first Wildcat to win back-to-back freshman of the week honors. She set the UA freshman record for digs at 378.

With the Wildcats injuries piling up in the middle of the season, she stepped into the outside hitter position for eight matches, collecting 19 kills during that span.

For the 5-foot-7 Hiapo, who has been trained to play multiple positions, it was her doing whatever she can to help her teammates.

Yet, it wasn’t always easy as a freshman “backfilling just to fill a position.” She relied on her teammates and the program’s “positive environment that we could all just grow, even through the hardships that we were going through.”

That’s why she thinks this extended offseason was “priceless.”

“I think there’s a lot — I came in, not really knowing that much in the beginning, because kind of went straight from fall into playing and whatnot,” Hiapo said. “I think I learned a lot through the season as it came. I think that, for me, would help the littles coming in, give it to them right now. So that they can have more time to adjust.”

It’s not only the freshmen who have to adjust this season. With nine new players on the Wildcats, the four returners who have seen playing time are having to make adjustments as well.

For the first time in her career, senior outside hitter Paige Whipple is working with a new setter after Julia Patterson graduated.

"I knew what all that was supposed to look like and what it looked like from Julia. … it's just going to come down to me having a little bit of patience while they figure that out. And then ultimately trusting them in the same way that I trusted Julia.”

Whipple also has a new position coach in Matt Dyck. While this has been different for her, she said that Dyck is “positive and encouraging.”

The other change for Whipple is that she is the lone senior and has really stepped into her new leadership role.

“I said this to the group — and for the outside hitters — how fortunate we are to have somebody in the program who's been now going on her fourth year as a full time player for us, and to be able to shed some insight into how to train every single day, and the hardships and the pitfalls of playing as a young player and a first year player in our conference,” coach Dave Rubio said.

“She's been able to really provide a lot of really good advice for players, as we're going through training. Sometimes our training doesn't make a lot of sense. Then they go to Paige and are like ‘why are we doing this?’

“Her No. 1 role for us is to teach our players how to train every single day, how to prepare, how to get ready for practice with the diligence needed to compete at this level and be successful. It’s been invaluable for her and for us to have her.”

Last season, Whipple saw tremendous growth. She was the seventh UA junior to reach 1,000 kills and was sixth in the Pac-12 averaging 3.94 kills/set.

“I just became way more confident in my ability to score and it almost became to the point where my body just did it and I didn't have to think about where I was going to hit. I just saw the open space or saw the block and hit the shot,” Whipple said.

Rubio added: “The area that Paige doesn't speak about but really made a big difference — she was really our only go-to player. I think just mentally that takes a toll and then eventually you kind of adapt to that and accept that role.

"But when you become the best player on the floor, learning how to play on the team as best player takes some time. … I think emotionally mentally that really prepared her for what can happen this year. I think that's maybe one of the biggest differences. That she knew she had to play every point of every single play ever take play off.”

Athletes Unlimited, the new professional women’s sports league that recently finished its inaugural softball season, is starting a new volleyball league that will start in Nashville in February.

Former UA standout Cursty Le Roux is one of the first players to come on board.

Both Hiapo and Whipple are intrigued by the opportunity to play professionally in the United States after they graduate.

“I've thought about maybe going to play professionally overseas … I'm so close with my family, and being away from my family for eight months, or whatever it is, for the season would honestly probably be the hardest part for me,” Whipple said. “Thinking about maybe playing somewhere here in the United States being an option, I think that definitely sounds a little bit more inviting for me. And I think that would be a really exciting opportunity.”

The Wildcats have spent a lot of time on position and individual training. Typically, at this time they would be focused on match-specific tactics. However, Whipple thinks this extra time has been good.

“I think this is really cool time where… we're not even allowed to play full six-on-six yet," she said. "That’s a blessing in disguise, because we get to spend a lot of time doing that individual training. And I think that's really going to pay off once we get into more competition setting."

Butler scores 40 as Miami wins 115-104 in Game 3 of the NBA Finals on Sunday night in Lake Buena Vista, Florida.

Cate Reese's desire to be great fuels her on, off court

UA junior forward didn't let pandemic slow her, and was driven by the prospect of a big year ahead for the team.

UA coach Adia Barnes said the Wildcats are "thrilled" to have Bendu Yeaney, a transfer from Indiana, at her disposal. 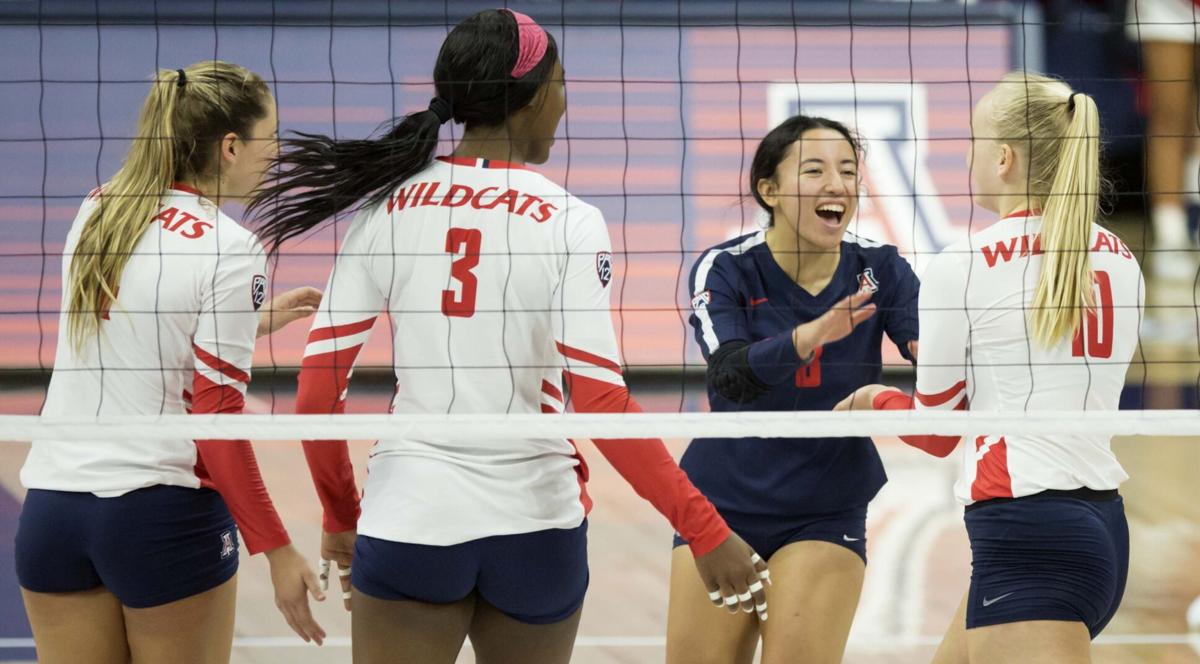 Freshman libero and defensive specialist Kamaile Hiapo, 8, celebrates with teammates after winning a point during the Arizona Wildcat's 3-0 win over the Alabama State Hornets in the first game of the Wildcat Classic on September 19th, 2019 at Mckale Center 1721 E. Enke Dr., Tucson, Ariz. 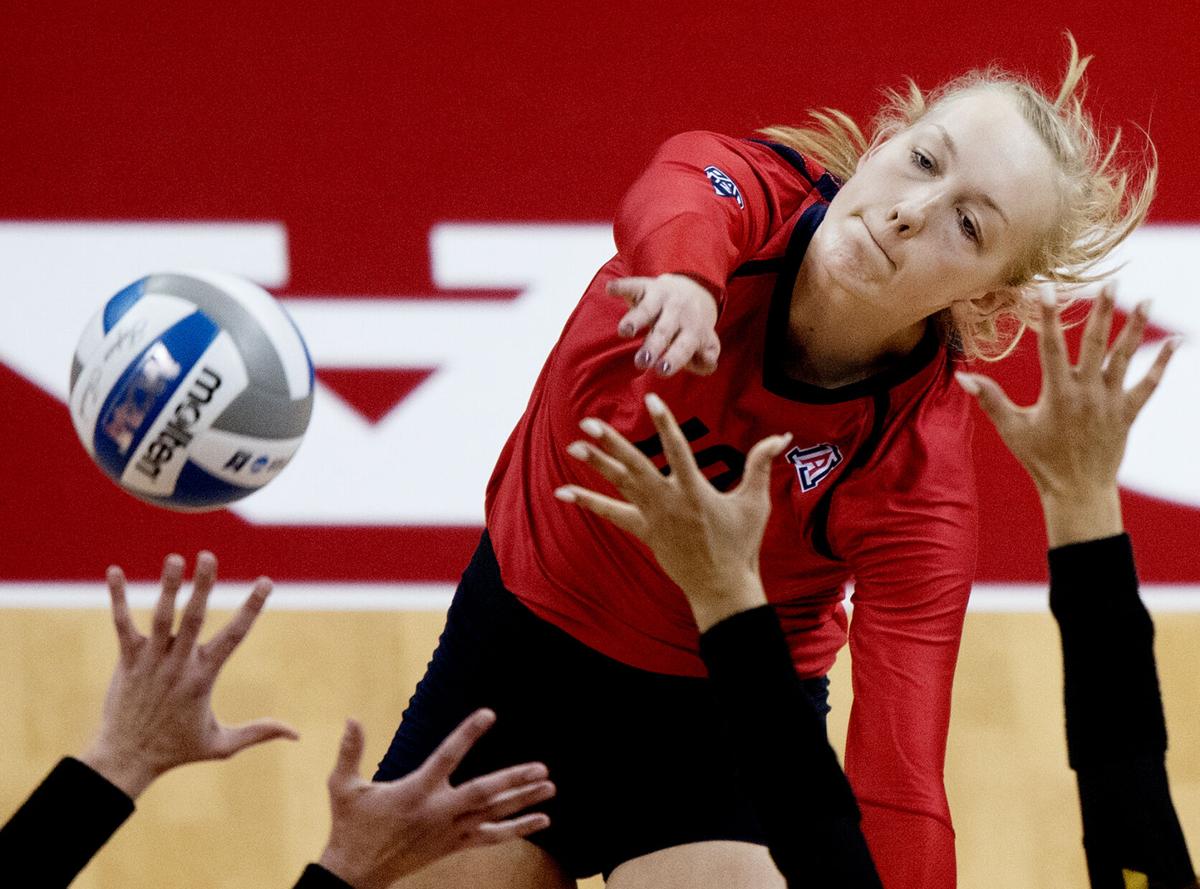 LINCOLN, NEB. - 11/30/2018 - Arizona’s Paige Whipple (10) attempts a kill through a pair of Missouri hands in the first set on Friday, Nov. 30, 2018, during the NCAA volleyball first round at Devaney Sports Center. FRANCIS GARDLER, Journal Star