Greg Hansen: Thanks to Mike Candrea and crew, 'Rita' is the No. 1 name in softball this weekend
Share this
Greg Hansen

Arizona sold out its weekend softball series against Arizona State a few days ago, which may or may not be a Pac-12 record. Capacity crowds at Hillenbrand Stadium are almost numberless, unchallenged in the Pac-12, but no one ever created a statistical category for “The Day The Last Ticket Was Sold.”

The last of about 8,500 UA-ASU reserved/general admission tickets for the three-game series was sold on Tuesday, although those willing to opt for standing-room-only areas might be able to squeeze inside the new Hillenbrand Stadium this weekend.

That, too, is a familiar scene at “Rita.”

The demand for tickets at Rita Hillenbrand Stadium began in 1993, when the original stadium (capacity 734) sold out every home game. As Hillenbrand grew, Arizona led the NCAA in softball attendance seven times. The reign ended in 2012, when Alabama annexed millions of dollars from its football factory to re-do Rhoads Stadium and set capacity at 3,940.

Now the Crimson Tide (34-1) has led the nation in college softball attendance for seven consecutive seasons, although this year’s two leading NCAA figures are ridiculously close.

The UA’s goal isn’t to lead the nation in attendance. If so, it would have added more seats when it spent $8.5 million to renovate Rita. Arizona’s goal is to get back to the Women’s College World Series for the first time since 2011.

Here’s some perspective on “forever” in college softball:

A few days ago, Fox Sports Arizona MLB and NHL analyst Todd Walsh, a pioneer in Tucson sports radio, returned to campus — the UA is his alma mater — to film a one-hour special about coach Mike Candrea and Arizona softball.

When Walsh broke into the radio business at KNST in 1986, Candrea was a first-year UA softball coach, a stranger on campus with multiple degrees from ASU, whose team played on the lawn behind the Ina Gittings building.

That setting was more suited for a slowpitch softball beer league than for a coach who would go on to win eight NCAA championships and lead Team USA to the 2004 Olympics gold medal.

Walsh and Candrea met in ’86 when the KNST sports-talk show was often broadcast from J.J. Nickels, one of Tucson’s first campus sports bars. It’s now the site of Trident Grill.

For the last 33 years, Walsh has been occupied with Phoenix sports and admits that he lost track of Arizona softball years ago. His journey to Tucson, his meeting with Candrea, touched him emotionally.

“I really feel like I missed something so big and so cool,” he said. “I was just blown away by what I saw. That’s a living, breathing dynasty.”

Candrea brought 27 of his championship rings to a film session at Trident Grill — some from USA Softball, some from the Athens Olympics, many from the Pac-12 and Women’s College World Series. After they chatted for the first time in 33 years, Walsh and Candrea toured the new Rita.

“That stadium is a palace,” said Walsh.

The new Rita may not be the best of all college softball stadiums, but who cares if it’s No. 2 or No. 6 or wherever? As soon as Arizona began construction last June, powerhouse Oklahoma announced it would spend $22 million on a softball plant.

A few years before that, Oregon spent $16 million to build Jane Sanders Stadium. The Ducks were the envy of Pac-12 softball for a few years, routinely filling “The Jane,” even surpassing Arizona last year by averaging 2,431 fans to the UA’s 2,223.

That’s the difference between Arizona and many of its competitors in the Top 25 of college softball. The Wildcats have endured, remaining competitive at the highest level under Candrea, 33 years and counting.

While Walsh was working his way up the TV sports ladder in Phoenix, Candrea survived serious challenges from many. Few were more imposing than Fresno State.

Fresno’s Margie Wright Diamond was the game’s most crowded softball venue for a decade, leading the NCAA in attendance from 1996-2005 as the Bulldogs vied with Arizona and UCLA for the top prospects in the West.

According to Fresno State’s media guide, the largest-ever crowd in a regular season college softball game, 5,724, packed the stadium when Candrea agreed to take his team to Fresno for a March 2000 game at Wright Diamond.

It was softball heaven.

And then it all changed. The Bulldogs haven’t been to the World Series since 1999. They’re now 1-5 in the low-brow Mountain West Conference, drawing as few as 651 at Wright Diamond this season.

At Hillenbrand Stadium, interest soars. All the seats are sold and ESPN2 is sending a crew to Tucson to broadcast Sunday’s 4 p.m. game against the Sun Devils.

Rivalry series is four years in the making for Arizona's Jessie Harper, her Sun Devil sister

The Wildcats have gotten the better of the Sun Devils under Jay Johnson, but Arizona State is playing as well as any team in the country.

With each game of the postseason, the stakes seen to get higher. Most teams would feel that added pressure. Not the Arizona women’s basketball team.

Greg Hansen: It's time for the invaluable Jim Rosborough to join coaching Hall of Fame

Assistant Basketball Coaches Hall of Fame: It was made for coaches like 'Roz.'

Greg Hansen: An extended WNIT run by Arizona could mean it's time to 'take down the curtains'

More Wildcat victories could translate into biggest crowds for the team in years.

The Wildcats host Idaho at McKale Center in the WNIT Sweet 16 on Thursday.

Jessie Harper hit a grand slam and drove in five runs overall as the No. 12-ranked Arizona Wildcats softball team stayed perfect in the Pac-12…

The No. 12-ranked Arizona softball team improved to 4-0 in Pac-12 play with a 9-1 run-rule win at Oregon State in six innings on Friday in the…

Greg Hansen: Adia Barnes' repair job has Wildcats in the WNIT — and thinking about more W's

The Wildcats will host Idaho State in Thursday's WNIT opener at McKale Center.

The best video clips following Arizona's 68-60 win over Idaho in the WNIT Sweet 16.

The Wildcast, Episode 183: Alyssa Denham celebrated her 21st birthday with a no-hitter

The Star's Norma Gonzalez talks to Arizona pitcher Alyssa Denham on her milestone, their shared love of Texas and why the Louisiana-Lafayette …

The Wildcats run-ruled their rivals 8-0 in five to kickoff their three game series at Hillenbrand Stadium, Tucson, Ariz.

Arizona threatens, but sizzling ASU pulls away to take opener

The Sun Devils improve to 23-1 while the Wildcats drop their fifth in a row.

Cats will go for sweep Sunday when teams meet at 4 p.m. on ESPN2.

Red-hot Wildcats leaning on chemistry, preparation to carry them during travel-heavy April

Wildcats will take on Utah in a three-game series that begins Friday night. 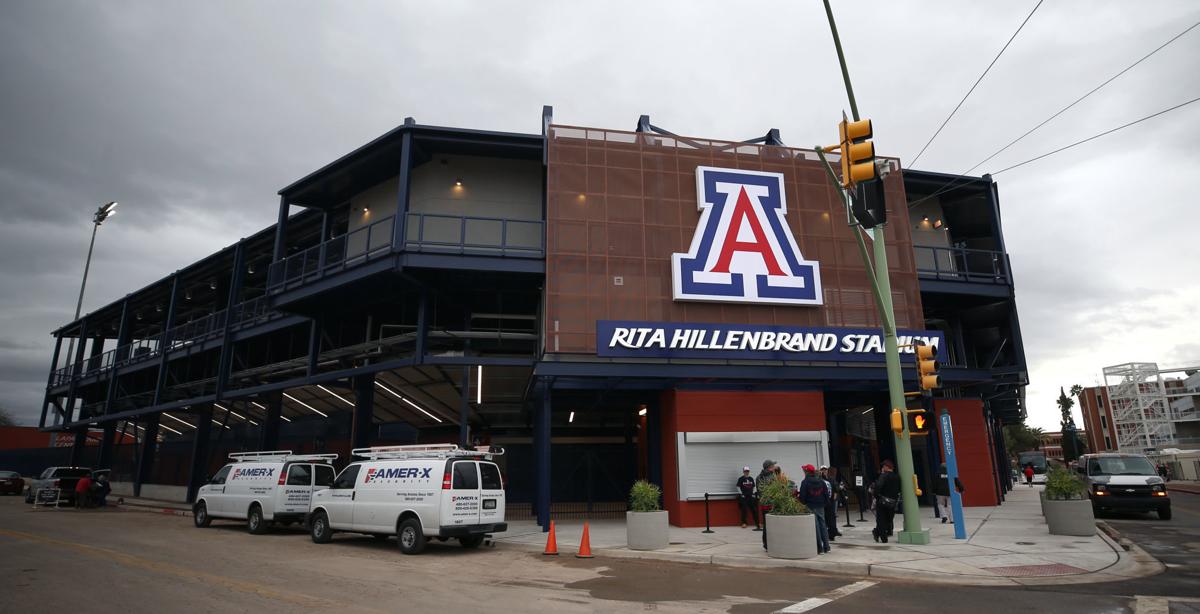 Arizona’s head coach Mike Candrea peers in with the Wildcats at bat against Minnesota at the Wildcat Invitational at Hillenbrand Stadium, Saturday, March 2, 2019, Tucson, Ariz.