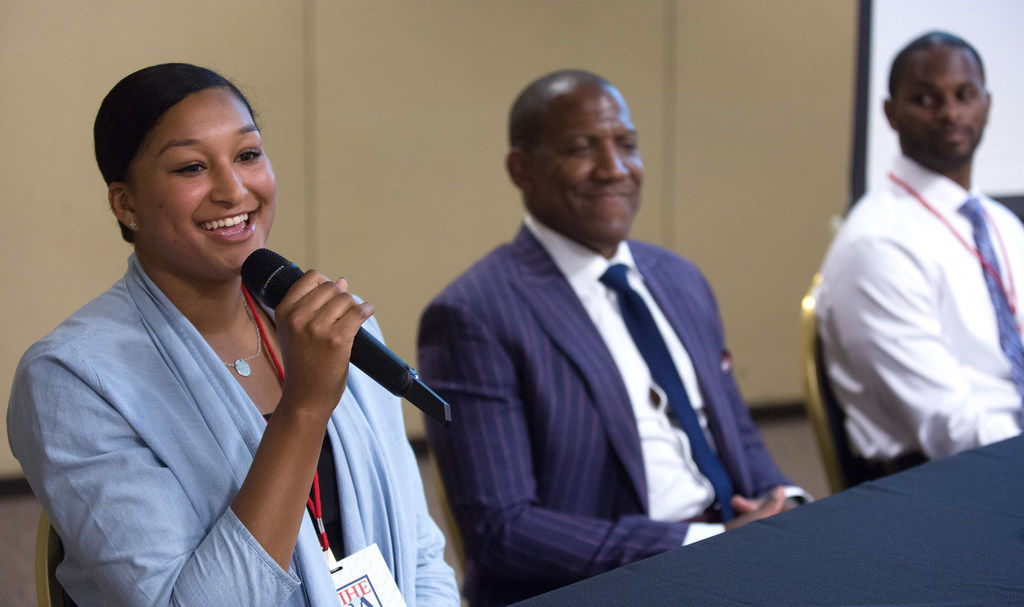 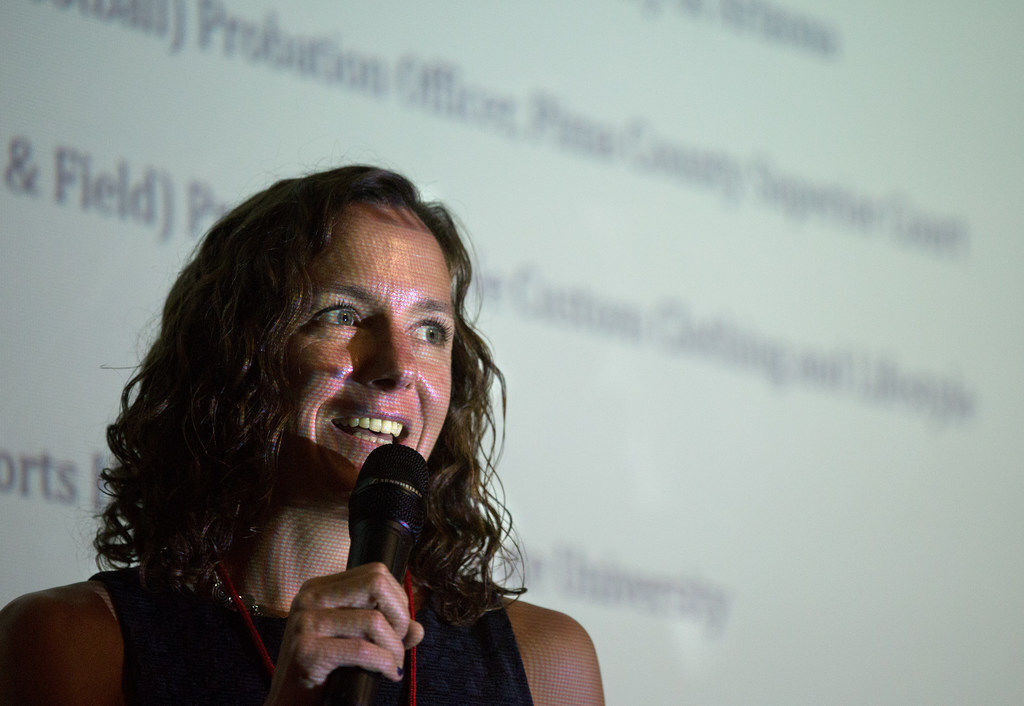 Victoria Jackson, a sports historian at ASU, says she was a white athlete who benefited from a broken system. She was a championship runner.

The role of athletics on college campuses, Title IX and the student-athlete experience took center stage Thursday as hundreds of people turned out for a daylong University of Arizona symposium addressing hot topics in academics.

The Controversial Issues in Higher Education symposium is an annual event put on by the UA. The program initially focused on constitutional issues before it was expanded this year: Thursday’s event included educators, attorneys and students.

Keynote speaker Victoria Jackson kicked off the event with a talk called, “Black Athlete Labor Pays for White Athlete Privilege and Other Ways American College Sports Should Make Us All Uncomfortable.” Jackson, a sports historian who teaches at Arizona State, told the crowd up front that she was a college athlete who benefited from a broken system.

“We need to do better and be good allies and speak about our privilege,” Jackson said. “I don’t think this topic is controversial. It’s demonstrated.”

Jackson said colleges fill the rosters of their revenue-generating football and men’s basketball teams with black athletes. The money generated from those sports helps pay for scholarships for other sports, whose rosters are often made up of white athletes coming from wealthier homes, she said. Jackson was one of them: She was a distance runner at both North Carolina and Arizona State who won a national championship in the 10,000 meters. Her dissertation was titled, fittingly, “Title IX and the Big Time.”

Jackson said society believes that college sports are an incredible experience for everyone who plays, and that’s simply not the truth. Figures released by the NCAA in April show that 1.2% of draft-eligible men’s college basketball players went on to the NBA, though a larger number — 21% — went on to play professionally in lesser leagues. Only 1.6% of college football players were taken by NFL teams. The NCAA wrote that, “The likelihood of a high school or even college athlete becoming a professional athlete is very low.”

The power that athletic departments wield makes them ripe for scandal, Jackson said, mentioning the June 2018 workout death of Maryland football player Jordan McNair and the FBI’s September 2017 arrests of four assistant college basketball coaches, including Arizona’s Book Richardson, for their roles in a bribery scheme. The UA fired Richardson, who later took a plea deal; he has been sentenced to three months in prison and two years probation.

The fundamental lie is amateurism, Jackson said, adding that the United States is the only country in the world with a multi-billion dollar sports industry that utilizes students as athletes.

“Amateurism is a system that allows predominantly white head coaches to hire predominantly black recruiting coordinators and assistant coaches who specialize in recruiting and not even have to verbalize, ‘Do whatever you need to do to sign the kid from your ... community,’” Jackson said. “And if a black recruiting coordinator is arrested in an FBI probe and Justice Department investigation, that white head coach will claim he doesn’t know anything about because, he says, ‘We never had the conversation.’”

Title IX and the ‘Man Box’

Following Jackson’s speech, the symposium split up into smaller sessions, including Austin attorney Scott Schneider’s talk about Title IX, the federal law designed to ensure gender equity. All but three of the 60 people in attendance for his talk were women.

Schneider discussed the history of Title IX, a 39-word law that has been widely interpreted since it was passed in 1972 and could soon be undergoing some major changes under the Trump administration’s proposed guidelines.

Under the new rules, Schneider said, a school would have to show “deliberate indifference” and a “clearly unreasonable response” to a complaint set before them to be sanctioned. Schools would only have to maintain records of Title IX investigations and training materials for three years as opposed to the current seven. Schools would also be allowed to adopt a higher standard of evidence to determine guilt and conduct live hearings in which the accused has the right to cross-examine the accuser.

As a result, “Enforcement probably won’t be happening as much anymore,” Schneider said.

Schneider said he believes that final regulations from the federal government will be released in September, and said he’s certain they’ll be challenged in court.

“We have made enormous cultural changes that we constantly have to fight to maintain,” Schneider said, adding that when he thinks of systemic failures in Title IX at universities, almost all of them can be found in athletics. When schools create a culture where people don’t feel comfortable reporting, situations like Larry Nassar’s widespread sexul abuse of athletes at Michigan State University are the result.

At the same time as Schneider’s talk about Title IX, about 30 attendees sat in on Christopher Guerrero’s session, “A Call to Men.” Despite the title of the session, the room was made up of both men and women.

Guererro, a Tucson native and Army veteran who works with the Southern Arizona VA Health Care System, began the talk with a short video showing the prevalence of physical and sexual violence against women. He also discussed how violence against women is so common that it is impossible to not be connected to it somehow.

A central concept of his speech was the “Man Box,” which Guerrero defined as the rigid social norms men are expected to adhere to — including the ideas that men must not show emotion except anger, must objectify women and must avoid anything associated with vulnerability, femininity or homosexuality.

The consequences of stepping out of the “Man Box” can be difficult and even dangerous, he said. Men can face loss of power and respect, shame, social isolation, missed job opportunities and physical violence, he said.

When men remain in the man box, Guerrero said, they are conditioned to devalue and objectify women.

“Violence against women rests on the backs of all men. We know that all men are not out there, moving in the world, raping women,” Guererro said. “But we also know there are a lot of things about manhood or masculinity that keep us stuck in a culture that exists for us as men that allows violence against women to exist.”

He ended the talk with the idea that influential men, such as athletes and musicians, must use their voice in order to promote health masculinity and respect for women.

During her keynote speech earlier in the day, Jackson told the crowd that talking to student-athletes about their college experience was vital to invoking change. Jackson did just that in a later session, moderating a panel as three former UA athletes talked about their time at the UA and what they wish they’d known as students.

Former softball player Alexis Dotson, former football player Wilrey Fontenot and former track and field athlete Percy Knox had different experiences in their respective sports, but agreed that transitioning from their lives as student-athletes to the real world was not easy at first.

Dotson, who graduated in 2017 and is currently a graduate student at the UA, said she struggled with time management since, for the first time, no one was telling her what to do. Remembering the structure that she had in her life as a student-athlete helped get her back on track, Dotson said.

“Getting comfortable with being uncomfortable is the biggest thing,” Dotson said.

Knox, who graduated in 1992 and is president of Élevée Custom Clothing and Lifestyle, wishes he’d known how important it was to network with people both inside and outside of the athletic department.

“It’s very easy not to be connected, even though we’re more connected than ever,” Knox said, adding that his last three jobs all came from referrals.

Dotson urged the educators to get to know the student-athletes in their classes.

“It can take one conversation with a person to impact their life,” Knox said. “If you give of yourself ... you never know what kind of impact it can have on the rest of their life.”

Fontenot, who graduated in 2008, played for two years in the NFL and is now a Pima County probation officer, said his coaches reminded him constantly that he was at the UA to play sports. Fontenot said educators need to be realistic with student-athletes and remind them that academics, not sports, are what’s going to get most of them through life.

“We (student-athletes) are motivated by goals,” Knox said. “If you can tap into something that will help or hurt us, you’re going to get a better response.”

Vanessa Ontiveros is a University of Arizona journalism student and Star apprentice.

Ejections at McKale dropped by more than 50 percent. Things were also relatively quiet at Arizona Stadium.

Baillie Gibson sued the UA in 2015, after her former track and field coach assaulted her in his office.

Harris is the brother of current UA edge rusher Jason, and son of Tucson native and former UA standout Sean.

Sunday was the opening day of NBA free agency and one former Arizona Wildcat is on the move. The Golden State Warriors traded small forward An…

As the NBA offseason continues, another former Arizona Wildcat is on the move. This time, free agent point guard T.J. McConnell agreed to a tw…

The quarterback from Cienega High is working out at other positions in hopes of seeing the field more in 2019.

After years of dormancy, the Tucson Police Department is reviving its Safe Place program, which aims to provide a sense of security for victim…

The House Education Committee voted Monday to advance the bill, saying it would promote balance.

Victoria Jackson, a sports historian at ASU, says she was a white athlete who benefited from a broken system. She was a championship runner.