Read Today's E-Edition
Share This
Wildcats want to compete for titles in women's triathlon; can they topple powerhouse ASU?
Share this
Ryan Finley

By now, Dave Heeke’s used to the questions.

Since the UA announced Aug. 22 that it would be adding women’s triathlon as its 22nd intercollegiate sport, Wildcats fans have come out of the woodwork to ask the athletic director how it’s all going to work.

Who’s competing? (The Wildcats’ roster will be capped at 14 athletes, with 6½ scholarships split between them).

Who’s your coach? (The job will be posted soon, with a January start date; elite-level coaches have already reached out to the UA).

What’s it going to cost? (The UA will spend up to $1 million a year for scholarships, travel, a head coach and an assistant.)

And, of course, the biggest one …

"We’re in Tucson; where’s the water?" Heeke said with a chuckle. "Then, when people hear more about it, I think they’re pretty enthusiastic about it.

"There are some natural ties. You start talking about this place as a training ground for elite-level bikers and runners … and (take) the success we’ve had in swimming, and this part of the country, and so it starts to fit.

"I think people are pretty excited to see it. They all want to come to the first event that we host here."

UA officials had considered adding another NCAA Division I women's sport for years.

But which one? Heeke and Arizona’s other administrators considered lacrosse, water polo, rifle — the UA was a power in that sport decades ago — as well as equestrian. There were logistical issues with each one. In the case of equestrian, for example, the UA would have had to find stables (and horses).

Six Pac-12 schools play lacrosse, but the scholarship limit of 12 and a large team size — around 30 — may have given the UA pause.

Heeke, a native Michigander and self-described "old hockey guy," even considered a push for a Division I women’s team. The UA has already agreed to build an ice rink for its club and adaptive hockey teams. But the cost of moving to Division I are prohibitive, Heeke said.

"I would really enjoy having hockey, but it’s a big lift, a big expense," he said. "The travel commitment is big. We’d have to go east and to the Midwest (for games)."

Triathlon made sense for a number of reasons, Heeke said. Tucson has become a popular training ground for cyclists and distance-runners. The newest Wildcats can run and cycle both on and off campus. They’ll swim in the Hillenbrand Aquatic Center pool — that’s where the water would come from, to answer an earlier question.

The UA hopes to eventually host a multi-team event every fall. How that would work is still up in the air. Heeke said he envisions the swimming portion taking place at the Hillenbrand pool, with the running and cycling happening either on campus or through adjoining neighborhoods.

Of course, the finer points aren’t that important at this stage.

Other programs make it happen. One in particular.

Before becoming the head coach of Arizona State’s powerhouse women’s triathlon team in 2015, English spent 10 years in the Old Pueblo coaching professional and Olympic athletes. He lived near Kolb Road and Sunrise Drive, rented out Hillenbrand for his athletes, and raves about the JW Marriott Starr Pass Resort & Spa. A conversation about his former home includes talk of Daisy Mae’s steakhouse.

The prospect of the UA competing against ASU in a sport that the Sun Devils dominate doesn’t bother English — at least not yet.

"In the quick, near future, we’ll be pretty big rivals," he said. "To have that ability to be within two hours of each other and do dual meets, it’s going to be fantastic. I can’t wait to develop a new relationship with the (Wildcats’) coach early on. We need it to be strong and to continue."

On Nov. 12, the Sun Devils will host the Women's Collegiate Triathlon Championships at Tempe Town Lake.

It’s a rare home event for ASU. Earlier this season, the Sun Devils traveled to Denver and Longmont, Colorado, for events. While the athletes took Southwest flights north, English towed a trailer stocked with bikes. Of ASU’s 10 existing Division I opponents, only three — the University of Denver, the University of San Francisco and TCU — can even generously be considered western schools. The rest: Delaware State; Duquesne University; East Tennessee State; Hampton University; The Queens University of Charlotte; University of South Dakota; and Wagner College of Staten Island, New York.

"We don’t have too many (western schools), no in-state options," English said. Adding "a big school, another D-I school, I just think it’s fantastic."

While ASU has set the standard for college triathlon, Heeke said the UA isn't adding a team just to compete with its rival.

"Credit to them for making that step forward, and really helping to popularize the sport," Heeke said. "I think it’s more about what we wanted to do, and we think we can be very competitive. … We always dive into things wondering what’s best for us. It's 'what should we do for Arizona?' Not what others do."

Count English among the people who believe Arizona will be competing for titles soon.

"On paper, the U of A and ASU, we pretty much have the same things," he said. "We’ve got a bit of a head start. Seven years."

Arizona’s decision to add a women’s triathlon team "represents a major milestone in the women’s collegiate triathlon movement," Rocky Harris, the CEO of USA Triathlon said in August. "The state of Arizona is a world-renowned triathlon haven. With access to a variety of trails and roads that offer high-quality, year-round training, the school is sure to attract top student-athletes. USA Triathlon is thrilled to see increased competitive opportunities for student-athletes at the D-I level — more opportunities will help drive collegiate triathlon competition to the highest level."

USA Triathlon has taken major steps — and spent big money — to grow college triathlon from an NCAA Emerging Sport to, it hopes, a championship sport.

The governing body has been awarding grants to schools that add teams — a fact that may explain why the Division I ranks include not only ASU and the UA but the 2,300-student The Queens University of Charlotte, 2,200-student Wagner and 3,500-student Hampton.

USA Triathlon gave ASU $140,000 over three years to kick-start its program, though the Sun Devils no longer receive any grant funding. The majority of the money was spent funding scholarships, an ASU spokeswoman said.

The UA’s grant was "currently being finalized" as of the athletic department's announcement, a USA Triathlon spokesperson said. The UA deferred comment about the grant program to the governing body. While no figure has been given, the grant is believed to be in the tens of thousands of dollars — far less than ASU received.

Heeke called the grant money "a nice feature," and "a really solid way to get people to be interested real quickly," but said it wasn’t the deciding factor when it came time for the UA to add a new sport.

Heeke wants to win, and quickly. The Wildcats will field their first team next fall.

"Like all of our sports, we compete for championships. That's really why we made the decision versus kind of looking at someone else," he said.

After 14 months on the job, Arizona athletic director Dave Heeke has made the most significant changes to the school’s administration since Ce…

“Our guys were just champing at the bit to get going."

UA head coach Jedd Fisch says the defensive-heavy 2023 recruiting class "is going to be a huge part” of the program's success.

"Who else gets to play against the best players in the world for senior national teams?"

The Sabino High School and University of Arizona grad says a "cancel culture" mentality led to overreaction from the public.

Hear what Jedd Fisch said about Arizona's showdown with No. 10 USC on Saturday in Tucson.

Wes Johnson will coach the Wildcats' women's triathlon team when it begins competition next fall.

Arizona athletic director Dave Heeke announced Aug. 22 that the UA will compete in women's triathlon starting in 2023. It's a sport that rival Arizona State has dominated. 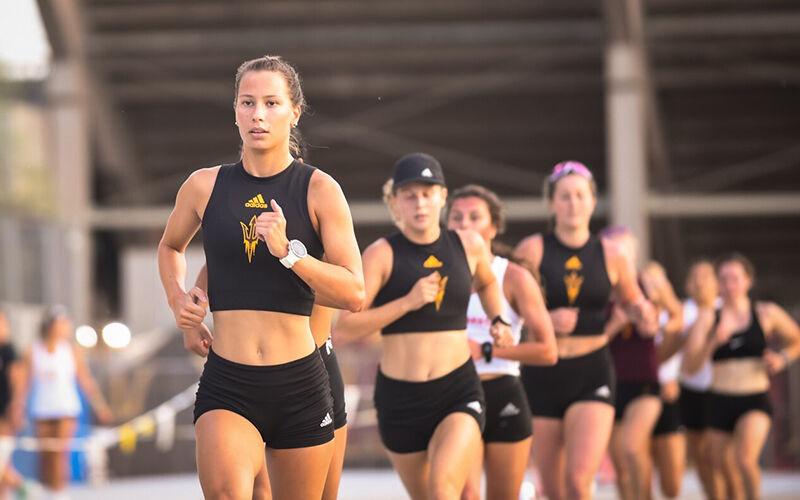 ASU has won five consecutive NCAA Division I triathlon titles. They'll compete for their sixth in a row on Nov. 12, when the Sun Devils host the championship meet at Tempe Town Lake.