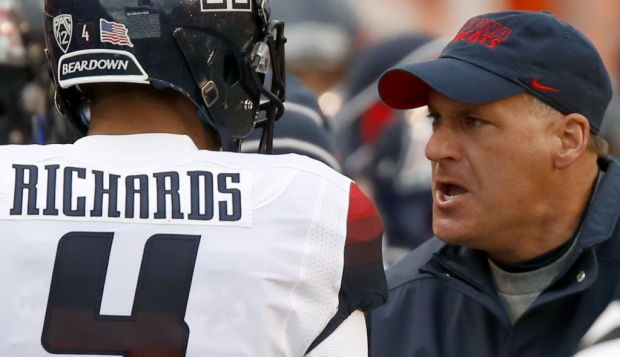 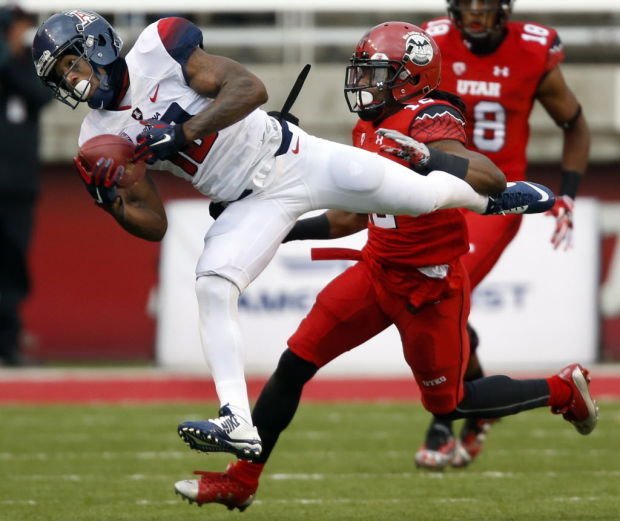 UA wide receiver Samajie Grant makes a twisting comeback grab in the first quarter at Utah. The Wildcats prevailed 42-10 to win 10 games for the first time since 1998.

Nate Rolston was an Arizona undergrad during the Desert Swarm years, a Wildcat-for-life who stuck with his school through three terms of football perdition, through Dick Tomey’s forced exit, through the John Mackovic mess and through eight interminable seasons with Mike Stoops.

In the life of a football fan, that’s enough time to fall away and swear allegiance to another team.

In Rolston’s case, it has been enough time for him to graduate from the UA, earn an advanced degree at Iowa State, spend a year of medical school residency in Oregon, get married, have three children, move to Idaho Falls, Idaho, and devote 15 years establishing the Countryside Veterinary Hospital.

That’s how long it has been since Arizona has been relevant in college football. About half of a man’s life.

On Friday, knowing the forecast was for rain or snow, or both, and that Utah was likely to put an unhappy end to Arizona’s nice little run to respectability, Rolston and his family nonetheless drove the 215 miles from Idaho Falls to Rice-Eccles Stadium and renewed their vows as Arizona football fans.

They sat in the wintry mix for more than three hours, the definition of diehards, until Tra’Mayne Boundurant intercepted a Utah pass and returned it 39 yards for a touchdown, giving Arizona a 42-10 lead.

Only then did Rolston, his wife Michelle and their three young children, Sam, Calvin and Caroline, join the long line of Utah fans to the exit.

After the game, before he could fully dry off, UA coach Rich Rodriguez was asked one of those let’s-get-serious football questions: What does it mean to be 9-2?

He didn’t stop there, he was already calculating how much better it could’ve been.

Ask yourself: Could Arizona truly be any better than 9-2? In its current form, given its personnel and the difficulty of the Pac-12 schedule, isn’t this what it’s like when a golfer shoots 64 and says, “I couldn’t have been a single stroke better”?

Whatever the metaphor, Arizona has become better, faster than almost anyone could’ve expected.

It was like the 31-yard touchdown that UA defensive end Dan Pettinato scored on a Utah fumble. “It still hasn’t hit me yet,” Pettinato said late Saturday afternoon. “It happened so fast.”

Arizona has been wandering in or near the football graveyard since 1999, when it unwisely chose to open the season at No. 3 Penn State and was rocked 41-7.

That’s when the UA football program began to unravel. It was about the time young Nate Rolston opened his veterinary hospital in Idaho Falls.

On the day Arizona announced it would play at Penn State, tantamount to shouting “bring it on” to the college football establishment, the Wildcats were in a better place than the Oregon Ducks.

Or so most thought.

The Wildcats had so much recruiting continuity, and one of the nation’s top coaching staffs, that they opened the ’99 season No. 4 in the AP preseason poll. They were coming off a season in which they routed the Ducks 38-3.

That same month in 1999, 35-year old Rich Rodriguez had left Tulane to become the offensive coordinator at Clemson.

For all it mattered to the high-flying Wildcats and their fans, he might as well have been setting up a veterinary practice in Idaho Falls.

On Saturday in Salt Lake City, 15 years later, RichRod coached Arizona to its ninth victory of the season. The last time Arizona won a ninth game was Nov. 7, 1998. How long ago was it?

Every team in the Pac-12 has had nine-win seasons since Arizona last won nine games, in 1998.

During the long hiatus from power to puff and now back again, Arizona fans longed for the day its team could win a late November showdown, against a ranked team, and finish the season by playing for more than just pride.

On Friday, with the Pac-12 championship still in play, Arizona will close its regular season against the Sun Devils. Every ticket at Arizona Stadium has been sold.

It is the most significant game played by Arizona, and the most anticipated game in Tucson, since the 1998 Territorial Cup.

Find the latest columns written by Star sports columnist Greg Hansen or search the archive for past columns he's written.

Watch the latest edition of the Arizona Wildcats Show or search through the archive to find past editions.

Have a tablet? Download our free weekly Wildcat sports magazine

Go to Tucson.com/Insider on your tablet to download our Sports Insider magazine.

UA wide receiver Samajie Grant makes a twisting comeback grab in the first quarter at Utah. The Wildcats prevailed 42-10 to win 10 games for the first time since 1998.