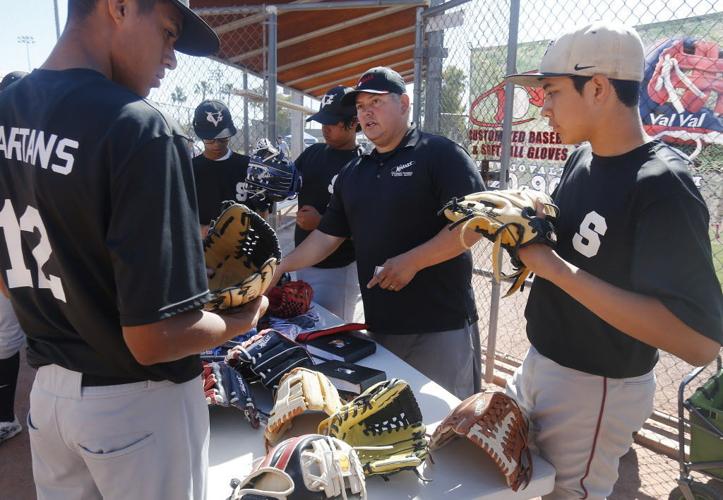 Casa Grande Vista Grande High School players check out Jorge Valencia’s inventory before their game at Reid Park on Saturday. Valencia began selling gloves out of his car in 1993. 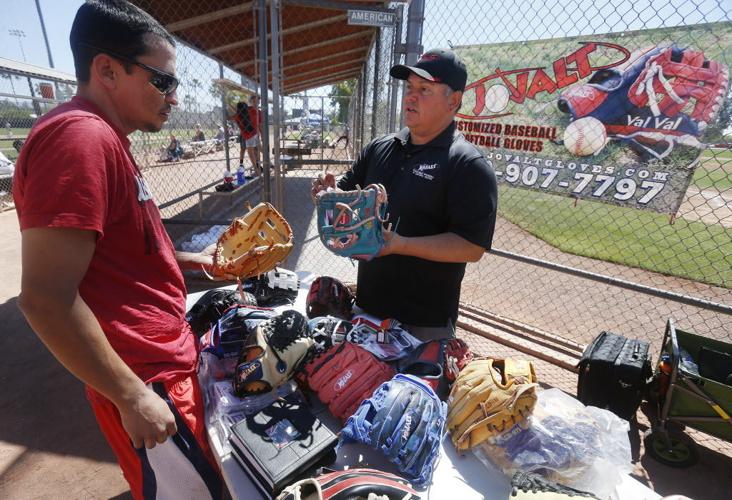 Jorge Valencia, right, shows Luis Aguilar the customized gloves Valencia’s company sells during baseball games at Reid Park on Saturday. The gloves cost between $140 and $180, about half of what the big sporting goods companies charge.

Jorge Valencia’s favorite thing about his baseball gloves is not the smell of the pure leather or the feel of the rawhide or even the look of the precise stitching.

Jorge Valencia’s favorite thing about his baseball gloves is the hope they provide.

As baseball continues to grow more and more cost prohibitive at any serious level, Valencia and his wife, Valerie, have dedicated themselves to providing lower- cost, customized baseball gloves to Tucsonans.

Valencia knows how important they are. Not just for protection, or for equipment, but personality.

“You can even say it’s a pet, a friend,” Valencia said. “When you get it new you want to sleep with it. You put a baseball in it, put it underneath the mattress, sleep on it, think you can use it the next day. Growing up where I grew up, it was a hand-me-down here or there. We learned to share.

The Valencias’ Jovalt Gloves company — the company name comes from an amalgamation of the Valencia family’s first names — expanded in 2013, when the Tucson-bred, Pueblo High School and Pima College-educated former professional baseball player heard one too many requests to bring back a glove from Mexico.

Valencia’s own baseball journey was fraught with potholes: Perennially “too small,” Valencia was cut from Pueblo’s baseball team as a freshman. He eventually made it, and got pretty good, walked on at Pima, then walked on at Troy State University in Alabama and went 11-2 with four saves as a senior. Still too small to get a sniff of pro ball, he worked at Walgreens for a year.

On a lark, he was invited to play in a national amateur tournament in Mexico, and he raised some eyebrows. He got an offer, with one contingency.

“They said you have to pay your way to Cancun, take a bus six hours, sleep four hours, try out, and then if you make the team, they’ll pay your costs,” Valencia said. “Funny thing was, I finally had a sense of reward when I threw off that flat mound with four hours of sleep. After I tried out in front of half of one team and half from the other, I said, ‘Whoever pays for my flight from Tucson to Cancun, I’ll sign with them.’”

After eight years of professional baseball below the border, he hung up his cleats in the early 2000s. But he couldn’t put the glove away. Friends wouldn’t let him. For years, they asked him about his beautiful gloves, where he got such a deal.

The gloves were beautiful, with tough Mexican leather, perfect stitching — comparable to top-of-the-line Wilsons or Mizunos.

He had a secret.

“When I got to Mexico, as luck would have it, one my roommates came from the area where they made gloves,” he said.

Valencia coaxed him into taking him to town for a tour, and Valencia bought some extras. The secret was out, and after two decades of micro-importing, the family only recently expanded the business.

The decision was simple.

“We expanded because kids’ eyes light up when they see customized gloves,” Valencia said.

A glove, after all, is an extension of the body. Customizing makes them extensions of the spirit. The custom-made Jovalt gloves cost between $140 and $180, about half of what the big companies charge.

“It’s just so special,” Valerie said. “I don’t know how to explain it. When a kid is ordering their glove, they’re involved in the whole process. Most of time the parent just lets them order them, make them theirs. Even though they know it might be four to eight weeks until it’s ready, they’re calling us, texting us every week.”

That’s the best part of this for the Valencias. Jorge has been a baseball fixture in town for years: He coached at several high schools around Tucson, and offers lessons to kids on the verge of a scholarship or a tryout. He still plays in a Tucson men’s league.

When he brings his gloves to games across the city, he says it is more like a reunion than a sales pitch.

Valerie loves building relationships with families, finding ways to help connect a kid to a glove. They regularly donate gloves to local charities and are always willing to work with families who might need a financial plan.

This is about more than business for the Valencias.

This is about baseball.

Former No. 1 overall pick Mark Appel called up by Phillies, finally gets his shot at the majors at age 30

Mark Appel’s wait is over.

Casa Grande Vista Grande High School players check out Jorge Valencia’s inventory before their game at Reid Park on Saturday. Valencia began selling gloves out of his car in 1993.

Jorge Valencia, right, shows Luis Aguilar the customized gloves Valencia’s company sells during baseball games at Reid Park on Saturday. The gloves cost between $140 and $180, about half of what the big sporting goods companies charge.