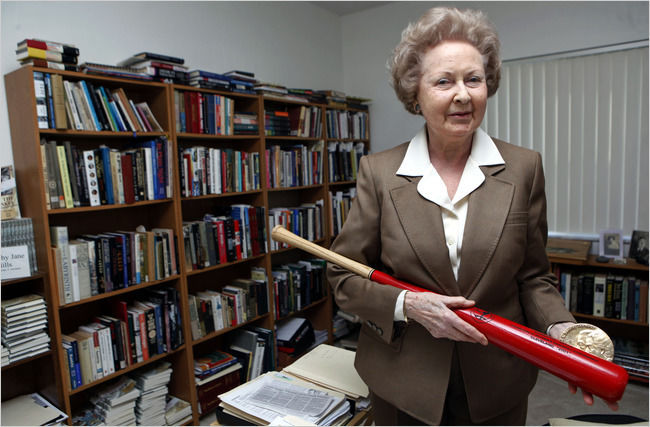 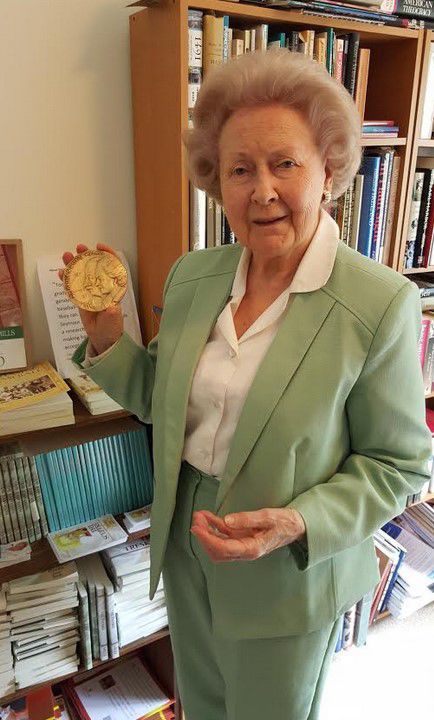 Dorothy Seymour Mills holds up the Seymour medal, which honors the best baseball book of the year. 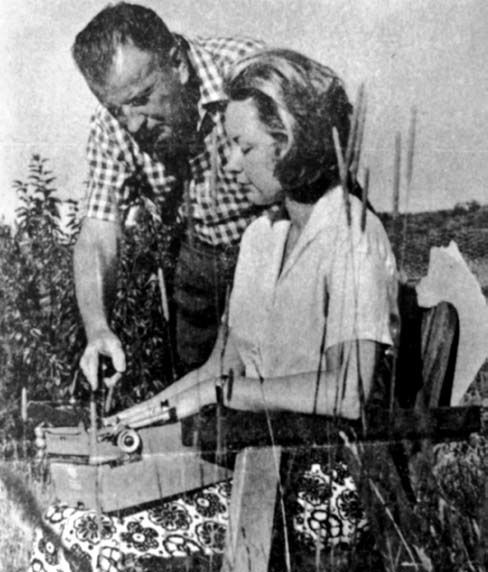 Dr. Harold and Dorothy Seymour, circa 1965. — Credit: Courtesy of SABR

Mills, considered by many to be a pioneer for women in baseball, died Nov. 17 in Tucson from complications of an ulcer. She was 91.

Mills had two awards named in her honor, and was recognized in the inaugural class of recipients for the Society of American Baseball Research’s Henry Chadwick Award, which honors baseball’s greatest researchers.

“She is truly a pioneer for women interested in any aspect of baseball,” said Leslie Heaphy, chair of SABR’s Women in Baseball Committee and a history professor at Kent State University.

Dorothy Jane Zander was born on July 5, 1928, in Cleveland, according to SABR. She was the first member of her family to go to college, attending Fenn College (now Cleveland State University). She initially majored in journalism before switching to English. During her studies at Fenn, one of her professors was Harold Seymour, who was a Ph.D. student at Cornell University at the time, according to SABR.

Seymour was writing his dissertation on the early history of baseball, and asked Mills to assist. Eventually the two fell in love, marrying in 1949, the day after Seymour finalized his divorce to his first wife. Mills transferred to nearby Western Reserve University to finish her bachelor’s degree and began teaching. She began writing children’s books after graduation while also pursuing her master’s degree, according to SABR.

Mills also became Seymour’s primary research assistant for his dissertation and, later, his books on baseball.

“Baseball: The Early Years” was published in 1960 with Seymour listed as the only author, despite what are now recognized as Mills’ significant contributions. Mills performed research, organized material and structured the notes for the book and its follow-up, “Baseball: The Golden Age.”

When it came time to write the third book in the series, “Baseball: The People’s Game,” Seymour’s health had deteriorated and Mills essentially acted his ghostwriter — even though her name did not appear outside of the book’s acknowledgments.

“She came of age in another era, when a woman might be content to work in the shadow of her husband, shunning recognition,” John Thorn, Major League Baseball’s official historian, said in an email to the Star. “In her later years Dorothy was viewed as a pioneer in women’s sports studies. I respected her work, and her husband’s, enormously.”

“Because of what happened with the early Seymour books, it was a long time before anyone knew that she had been that person,” Heaphy said. “For a long time, she was just out there doing her thing without anybody’s awareness that she was doing it, until after her husband died, the story came out. ... (The books) are even better when you realize this incredible contribution she made.”

SABR established the Seymour Medal in 1996, honoring the best baseball book of the year. The bronze medallion given to recipients includes profile images of both Seymour and Mills, as a nod to her unrecognized work. In 2010, Oxford University Press reissued the baseball books with Mills listed as co-author, according to SABR.

“What’s always been very funny, is that she wasn’t a very big baseball fan, per se,” Heaphy said. “She loved research. And she loved telling a good story and she loved the search and the finding and being able to put something out there that would give people an insight into history.”

Heaphy called Mills a pioneer for women interested in any aspect of baseball.

“Her contributions from the very start have always been held up by all of us as something that shows that it can be done, it can be done well and there’s a role for women in baseball,” Heaphy said. “What was always fascinating about Dorothy is that she was the most humble person and she always seemed a little surprised at how people viewed her and how important she was to people.”

In 2017, SABR’s Women in Baseball Committee created the Dorothy Seymour Mills Lifetime Achievement Award to honor women with a longtime involvement in baseball. Heaphy said that when trying to decide who to name the award for, she polled committee members for suggestions.

“There was no question at all that that’s who it had to be,” Heaphy said. “She was thrilled, but also surprised, as you would expect her to be, and also humbled that we would do that.”

Mills was a longtime member of SABR, attending the annual national convention every year until her health began to decline. One year, after the annual meeting of the women’s committee, Mills suggested the group go out to eat and continue the conversation.

“It’s a tradition that’s continued for at least 10 years, maybe more, and even in the last couple of years when she wasn’t able to come, we created a much bigger event, and it was all because of Dorothy,” Heaphy said. “It was that whole idea of women being able to get together and talk to one another and help one another and provide sounding boards. It’s just another example of what Dorothy meant.”

While Mills’ contributions to baseball are undeniable, her life and work did not focus exclusively on the sport.

Mills published children’s books, and, later in life, published dozens of other books — including a historical fiction trilogy and several satirical works about life in a nursing home.

In 1993, Mills met widower and retired Royal Canadian Air Force officer Roy Mills on a cruise. The two were married in 1995.

The pair lived in Naples, Florida, together until Roy’s death in 2012. Dorothy continued to live in their assisted living community for several years before moving to Tucson in January, said longtime friend and Tucsonan Charmaine Wellington.

Last year, Wellington took Mills to visit the Arizona Senior Academy and its lifelong learning program, of which Wellington was a member. It wasn’t long before Mills decided to move West.

“She was really interested in that, just the prospect of being around people who were very active intellectually,” Wellington said.

Mills bought a house, hoping to live independently, before moving into a local assisted living facility, Villa Hermosa. She died before she could take classes at the senior academy.

Wellington said her friend had “a delightful sense of humor, a great sense of fun. She was always ready to get up and go do things.”

Just before her death, Mills was writing a book on female baseball players. Wellington hopes to find the book among Mills’ belongings and hand it off to the appropriate editors, continuing her friend’s significant contributions to the sport.

“She did all of it without being an ardent feminist fighting for women’s rights,” Wellington said with a laugh. “It’s just that she was do darn curious and so interested.”

Dorothy Seymour Mills holds up the Seymour medal, which honors the best baseball book of the year.

Dr. Harold and Dorothy Seymour, circa 1965. — Credit: Courtesy of SABR