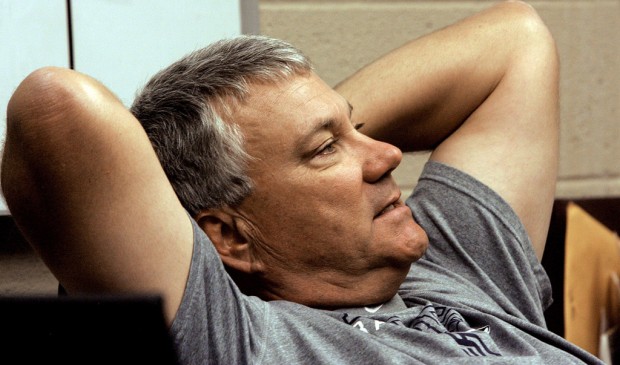 Padres manager Terry Kennedy on his father and fellow ex-major-leaguer, Bob: "Whatever I did, he just wanted me to do it the best I could." 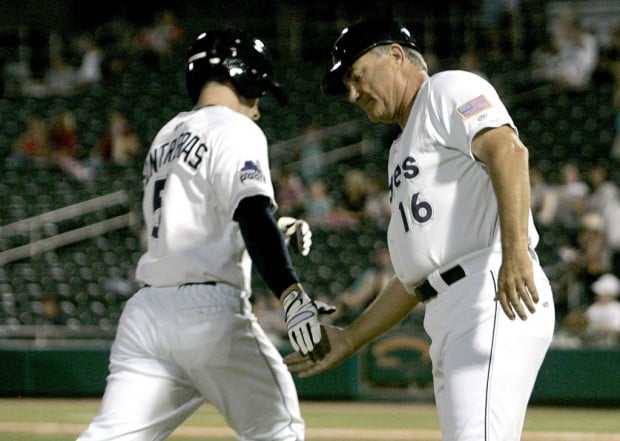 Terry Kennedy, congratulating Anthony Contreras on a homer, stayed in contact with his father throughout his playing career, often calling him to say he'd passed Bob in some category. Bob's reaction, always, was happiness for his son. 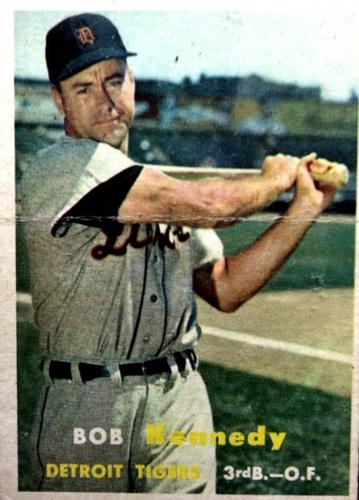 Bob Kennedy takes a practice swing on a baseball card from 1956, near the end of his 16 seasons in the major leagues. Although baseball supplied his livelihood, his wife and his kids were his life.

Before every Tucson Padres home game, manager Terry Kennedy sits at his desk and studies the large white board in his office, which lists all of his players and their positions.

Over his left shoulder sits the one personal belonging Terry, 56, brought with him to Kino Stadium - a 1956 baseball card, placed carefully inside a plastic case.

The Detroit Tigers' No. 3 is his dad, Bob Kennedy, as he takes a practice swing in foul territory.

The son with 1,313 career major-league hits wouldn't have a single one if it weren't for dad.

"He wanted to be just like his dad," Terry's wife, Teresa, said. "His dad was the strongest influence in his life."

Between them, they played for nine major-league teams and managed 12 professional squads. The threads of baseball and living honorably are woven into the Kennedy family tree.

The 6-foot-3-inch, 220-pound Terry spews intimidation to any player who crosses his path but turns into a smiling kid when he reminisces about his late dad.

Sometimes, his dad comes tumbling out as Terry repeats Bob's words: "'Fair' is a child's word, but sometimes you have to be as fair as possible."

His voice rises in pride when he talks about how Bob taught Ted Williams to fly fighter jets before the Korean War.

And, Terry will show anyone the perfect throwing motion he learned from his dad when he was 8 years old.

"He was a man of great honor and integrity," Terry said. "Every night, he got down on his knees and prayed for his family and the people he loved."

The message in the Kennedy house was always clear: Loving baseball was optional; being a good person wasn't.

Terry was the youngest of the five Kennedy kids: three girls and two boys.

"He didn't care if I played," Terry said. "Whatever I did, he just wanted me to do it the best I could. He wanted me to contribute to society and be a good person."

When Terry's brother Bob Jr. followed in his dad's footsteps and signed his first professional contract with the St. Louis Cardinals in 1971, dad made sure son had his priorities in order.

"He asked me what my goals were in baseball," said Bob Jr., who now lives in Mesa and works for UPS. "I told him a few, like I wanted to get to the big leagues, and I wanted players who played against me to think I was tough.

"He said, 'Those are good goals, but they aren't worth a crap unless you end up in heaven.'"

Bob Sr., may have controlled the message in the house, but his wife of 49 years, Claire, ran the show.

While Bob traveled most nights from April to September, Claire raised the children.

Through five cities as a player and more after his playing career, their love story never wavered.

It ended one year short of 50 when Claire passed away in 1994 after heart-valve replacement surgery.

"They built a house in Mesa, and they were supposed to ride off into the sunset there," Terry said. "When she died, I stayed with him at the house, and he was wailing in hysteria. I had to put my pillow over my ears.

From clubhouse kid to majors

Terry used to roam Wrigley Field as a young boy, wearing the same white pinstripe No. 61 uniform that Bob wore as the manager of the Chicago Cubs. He spent more time in a major-league clubhouse as a kid than some players do as pros.

But, he didn't play organized baseball until he was 12. He continued playing in high school and was "OK, but nothing special." In college, the youngest Kennedy became a star.

His dad had a strong relationship with then Seminoles coach Woody Woodward and helped land him a partial scholarship.

In Tallahassee, Fla., Terry grew into his big, strong body frame, and baseball became a top priority. He started hitting for power, and as a left-handed hitting catcher, Terry was becoming a hot commodity for professional scouts.

But, maybe the most memorable part of being at FSU was the drive to campus with his mom from the family's home in Chicago.

On their way, the pair stopped in Pensacola, Fla. Claire wanted to show Terry where his dad had trained for battle in World War II more than 30 years prior. She pointed out where the hotel she used to stay in was and explained how she would go outside and watch her husband fly over.

The airfield was long gone, but Claire's memories weren't.

After three years at FSU, Terry was the sixth pick of the 1977 MLB draft, selected by the St. Louis Cardinals.

He was traded to San Diego before the 1981 season and in 1984, reached the World Series with the club. In his first World Series at-bat, Terry hit a double down the right field line and drove in two runs.

The hit was significant for one major reason: It marked the first time in baseball history that a father and son each had an RBI in the World Series. Bob got his in 1948 when he won a ring with the Cleveland Indians.

When he finally retired from baseball in 1992, Bob, known in the sport as a no-nonsense man who saw only black and white, softened.

His relationship with Terry, which always transcended baseball, deepened.

"He was a tough old Irishman, but he got a tear in his blue eyes when he talked about his kids," Teresa said.

The same man who used to demand perfection from his players and himself on the baseball diamond was now a family man. He'd meet Teresa for breakfast and share baseball stories that even Terry hadn't heard.

"He'd say meet me at Village Inn, and I'll buy you breakfast," Teresa said. "It was simply to keep him company while he read the sports section. Then, every couple of minutes, it was 'you have to listen to this,' and a story would follow."

"He just ran out of gas. His mind was still very good, but his body just quit," Terry said. "He was 84 and lived a great life.

"I used to call him every time I'd pass him in something like home runs or hits. He loved those calls. He was proud of me as a baseball player, but more proud of me as a son, and that will always be more important."

• He made the final out in Brooklyn Dodgers history.

• He was the first manager in Oakland A's history.

• He signed his first professional contract as a 15-year-old, living on the south side of Chicago.

• He was one of just three major-league players to serve during World War II and the Korean War. Ted Williams and Jerry Coleman were the others.

Get the latest baseball news delivered to you!

Sign up to receive professional baseball news in your inbox every week.

Padres manager Terry Kennedy on his father and fellow ex-major-leaguer, Bob: "Whatever I did, he just wanted me to do it the best I could."

Terry Kennedy, congratulating Anthony Contreras on a homer, stayed in contact with his father throughout his playing career, often calling him to say he'd passed Bob in some category. Bob's reaction, always, was happiness for his son.

Bob Kennedy takes a practice swing on a baseball card from 1956, near the end of his 16 seasons in the major leagues. Although baseball supplied his livelihood, his wife and his kids were his life.