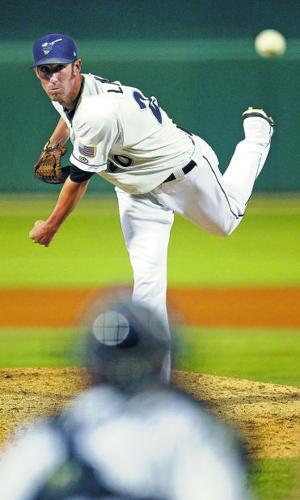 Padres reliever Tommy Layne pitches in the seventh inning against Reno during their gameTuesday, Layne is hoping he is one of the Tucson players called up when MLB teams can expand their rosters. 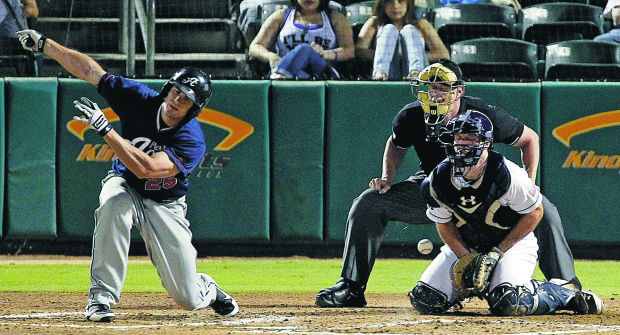 April, May, June, July, and August.

Not quite the catchy song you were taught as a kid to remember how many days are in each month.

For minor league baseball players, those 30 days of September mean everything. It can be validation for everything that happened in the five months before.

On Sept. 1, major league rosters expand from 25 to 40. It’s the best chance some guys in the minors — especially in Triple-A, the highest level of minor league baseball — will get at making it to “the show”.

Sean O’Sullivan, a Tucson Padres pitcher, got the call back in 2009 when he was with the Triple-A Salt Lake Bees in the Los Angeles Angels of Anaheim’s system.

The Bees were coming off a game with the Tacoma Rainiers when he got the call-up on the first of the month. He remembers taking a 45-minute shuttle from Tacoma, Wash., to Safeco Field in Seattle with four of his Bees teammates who also were called up, as the Angels were in the midst of a series with the Mariners.

O’Sullivan had already made his MLB debut in a few spot-start call-ups that season, but the Angels were in the playoff race, so for O’Sullivan to called up was still a big moment for him.

“It’s something that not many people get to experience, even if it’s just that one month,” said O’Sullivan, before the Padres lost 10-1 to the Reno Aces at Kino Stadium on Tuesday night.

“How many people get to say that? That you played in the big leagues?”

O’Sullivan probably won’t get the call this year — he was recently designated for assignment, taking him off the 40-man roster, and cleared waivers on his way back to Triple-A Tucson. But, there are a few other candidates for call-up on the Padres roster.

They said it: “I’ve been sent up and down a few times, and every time you get sent down it’s a little something else to work on. It’s all about getting better, grinding through it, and waiting for that call.” — Mikolas

The case: Blanks is only in Tucson for rehab assignment. If his ankle gets healthy in time, he’ll get the call-up; Decker spent last few weeks with San Diego, has a .293 batting average in Tucson; Robinson hitting .331 in 36 games in Tucson, solid backup catcher

They said it: “If he has legs underneath him, he’s playing well and he feels good physically, there’s a chance that when we expand we bring him up.” — San Diego Padres manager Bud Black, told the San Diego Union-Tribune, about Blanks

The case: There’s one spot available on San Diego’s 40-man roster. Anna leads the PCL in batting average; Sampson is ranked the No. 16 prospect for San Diego, according to MLB.com.

Get the latest baseball news delivered to you!

Sign up to receive professional baseball news in your inbox every week.

Padres reliever Tommy Layne pitches in the seventh inning against Reno during their gameTuesday, Layne is hoping he is one of the Tucson players called up when MLB teams can expand their rosters.