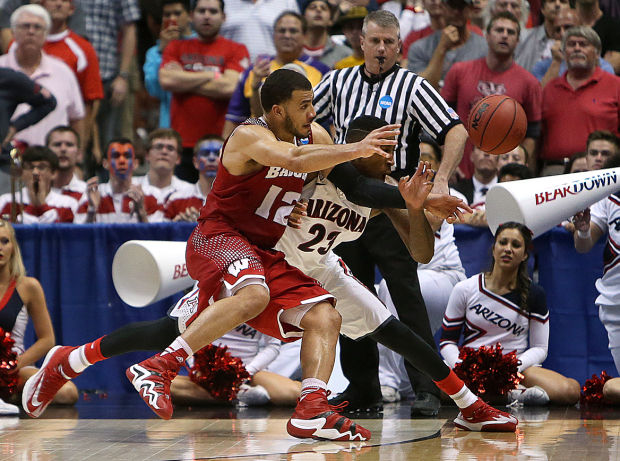 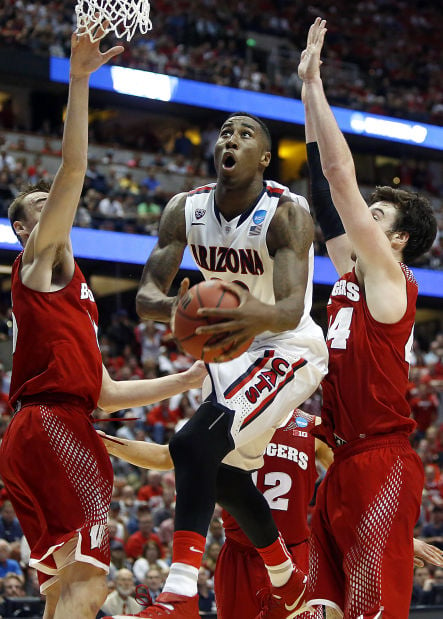 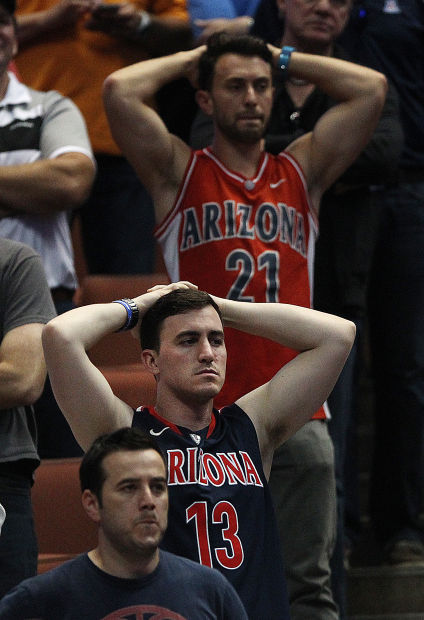 Arizona fans wait for a possession ruling from the referees in overtime at the Arizona vs. Wisconsin game at the NCAA West Regionals in Anaheim, Calif., on Saturday, March 29, 2014. Arizona lost 64-63.

ANAHEIM, Calif. — One possession. One shot. And, in Nick Johnson’s case, maybe one dribble too many.

The Arizona Wildcats knew it could come down to this Saturday, but they were on the wrong side of it, at the wrong time, and certainly in the wrong place.

It was another Honda Center heartbreak for Arizona, its memorable 33-win season ending in a 64-63 overtime loss to Wisconsin in the NCAA West Region final.

Johnson, who was called for an offensive foul with 3.2 seconds left before getting a final chance at a game-winning shot after Wisconsin lost the ball out of bounds, was composed afterward.

He blamed himself for not getting the final shot off quickly enough and wouldn’t make an opinion on the foul call he received when he drove the lane. Replays showed Johnson appeared to extend his left arm into the defender, a critical call at a critical time with Wisconsin leading 64-63.

“It was in the heat of the game and I was just trying to make a play for my team,” Johnson said.

UA coach Sean Miller was even more careful when asked about the call.

“I thought it was a really, really tough call,” he said. “I’m going to stop there. I’ve already been fined.”

Of course, Johnson made those type of plays for his team all season. The Wildcats spent eight weeks atop the Top 25 polls, broke a school record with a 21-0 start and won the Pac-12 regular-season title because Johnson was so effective on both sides of the court, and in the locker room.

This was a tough one for the Wildcats, though. Wisconsin actually matched Arizona’s defensive effort, with both teams shooting 39 percent, after the Wildcats took a 28-25 halftime lead in large part via their stifling defensive performance.

Arizona limited the Badgers to just 35.7 percent from the field in the first half, and let them make only 2 of 8 three-pointers, but Wisconsin nearly matched UA in rebounding, turned the ball over only eight times, and held UA to 3-for-9 shooting in the overtime period.

The Badgers also had a menacing offensive player in Frank Kaminsky, who went inside and outside for his 28 points and had 11 rebounds, forcing UA to bench Kaleb Tarczewski because Kaminsky was burning the Wildcats from the perimeter off screens.

Tarczewski, who finished with 12 points and four rebounds, offered Kaminsky plenty of credit.

“It’s tough to actually match up with a guy like that,” Tarczewski said.

Kaminsky had six of his points in the final three minutes of overtime, and his tip-in with 1:08 remaining turned out to be all the Badgers needed. At that point it was 64-61, and while UA’s Jordin Mayes tipped in a shot to cut the lead to one with 58 seconds left, neither side made another basket in the frenetic final seconds.

After Wisconsin’s Traevon Jackson couldn’t score on a drive inside, the Wildcats had a chance to go ahead with 29.3 seconds left.

But T.J. McConnell missed a jumper with 10 seconds left, and while he rebounded it and the ball later went to Johnson, who picked up the foul against Wisconsin’s Josh Gasser.

Wisconsin then inbounded the ball but it went out of bounds and officials reviewed it, giving Arizona the ball back.

An officials statement released after the game said all three officials agreed that Wisconsin was the last to touch the ball, reversing the initial call and giving the ball back to Arizona.

Ultimately though that just increased the pain. Another chance to win, and still, a loss.

Nearly 30 minutes later, Rondae Hollis-Jefferson, with another fearless performance, was still choking up slightly as he spoke.

“We didn’t want it to end like that but that’s basketball,” said Hollis-Jefferson. “Coach told us we had a great season, 33-5, but it hurts when you have that competitive nature and you want to win so bad. It eats you up when you lose.”

From a 21-0 start to the loss of a key player to finding themselves again to advancing to the Elite Eight, the Arizona Wildcats (33-5) put tog…

The Arizona Wildcats meet the Wisconsin Badgers in an Elite 8 game at the NCAA West Regionals in Anaheim, Calif., on March 29.

The Arizona Wildcats battle San Diego State in an NCAA Tournament Sweet Sixteen game at The Pond in Anaheim on March 27, 2014.

Arizona fans wait for a possession ruling from the referees in overtime at the Arizona vs. Wisconsin game at the NCAA West Regionals in Anaheim, Calif., on Saturday, March 29, 2014. Arizona lost 64-63.