Arizona basketball: Lyons setting the tone despite his struggles
Share this
1 of 2 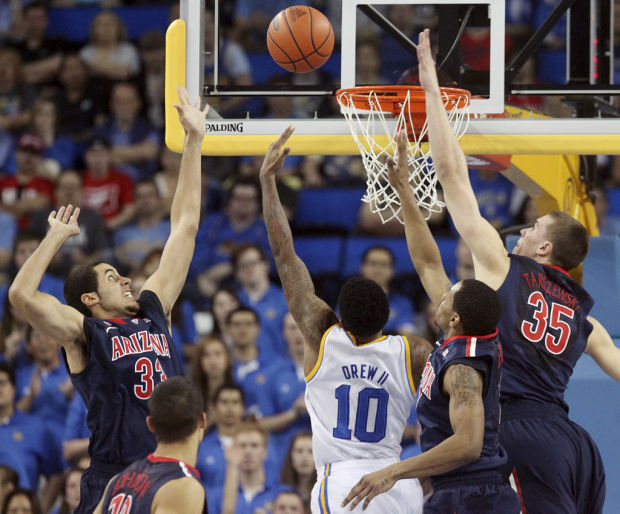 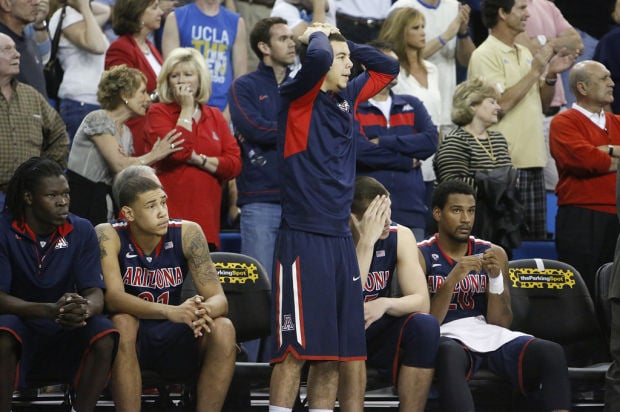 Reserve Gabe York reacts to a late missed jumper by Mark Lyons, with UA down 72-69. Shabazz Muhammad got the rebound and hit two free throws.

As a rookie point guard, however, Lyons had zero assists and four turnovers in UA's 85-57 win over the Red Raiders. That gave him 12 assists and 15 turnovers total in five games this season.

"I am concerned, and we're addressing it," UA coach Sean Miller said. "But he also brings things to the table that are very evident. He can score. I thought his baskets in the first half in particular set the tone for the game."

Lyons transferred to Arizona in large part for the chance to play point guard and improve his resume for the pros, having been largely a shooting guard at Xavier.

But that process, even for a veteran, involves two challenges: Learning Miller's system, and learning how to play point guard full time.

"He has to learn," Miller said. "He hasn't played point guard much. He's played guard."

So maybe that helps explain why Lyons has six assists and 12 turnovers in his past four games, a flip of the 2-to-1 ratio point guards often strive for.

The UA staff is "just trying to show him where to go, when not to, decisions, learning more about the system that we have," Miller said. "With each day, he's a willing learner. He wants to get better, and he'll turn the ball over less."

The good news for the Wildcats is that their offense is hardly stagnating. They are averaging 85.2 points a game in part because of the ballhandling help they are getting at the small forward and shooting guard spots.

Small forward Kevin Parrom, whose pass to Kaleb Tarczewski led to a monster dunk that gave UA a 22-point lead early in the second half Saturday, leads the Wildcats in assist-turnover ratio at over 4-to-1. Starting small forward Solomon Hill, meanwhile, is at nearly 2-to-1 with 15 assists and eight turnovers.

And, at shooting guard … well, maybe we shouldn't even call sophomore Nick Johnson a shooting guard anymore. He leads the team in assists with 21 and has only four turnovers, with 53 minutes of playing time over UA's past two games.

Miller said last week that he didn't want to move Johnson to point guard because he liked him as a supplemental ballhandler, reasoning that he would have a harder time in the full-time role.

But a look at the stat sheet, or any of Johnson's well-placed passes, makes it clear he's pretty comfortable with the ball.

"The one deceiving thing about our team - when you look at Nick playing with Mark - is that Nick in a way has the role of a point guard out there," Miller said. "He's played five games and has four turnovers, and he's making some really good plays. He complements Mark."

Johnson, who drew UA's nomination for Pac-12 player of the week Sunday, also is developing defensively. He leads the Wildcats in steals with 10, having swiped six in Arizona's past two games.

While Johnson helped UA keep Texas Tech to 34.9 percent shooting, the lowest any UA opponent has shot this season, Johnson said there's still plenty of more work to do.

"I think we're nowhere near where we need to be," Johnson said. "Our defense at times looked pretty good; other times we lacked a little bit. Every part of our game we can get better."

What was the craziest story in sports yesterday?

LUBBOCK, Texas - Texas Tech invited the Arizona Wildcats for a "white-out" Saturday, but the colors turned out all wrong.

Follow the 2012-13 Arizona Wildcats basketball season - from off-season developments through the postseason - via our interactive timeline.

Reserve Gabe York reacts to a late missed jumper by Mark Lyons, with UA down 72-69. Shabazz Muhammad got the rebound and hit two free throws.