Arizona basketball: Red-Blue scrimmage: Trying to channel 1988
Share this
1 of 3 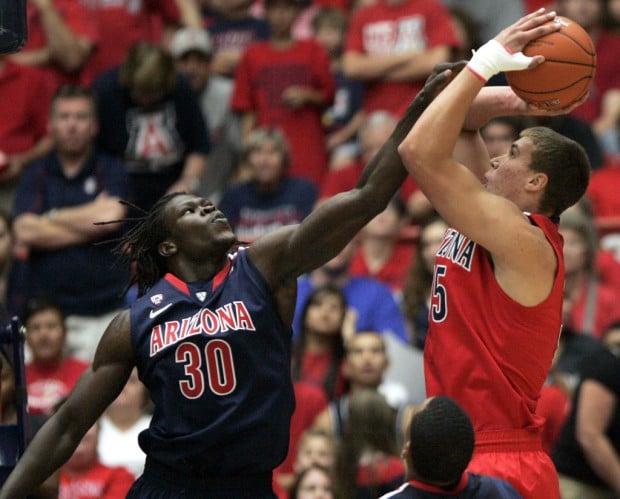 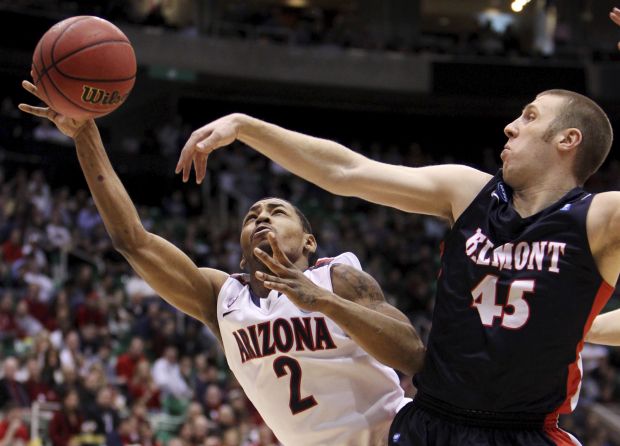 Arizona senior Mark Lyons, trying to shoot around Belmont's Brandon Baker, finished with a game-high 23 points on 8-for-15 shooting. 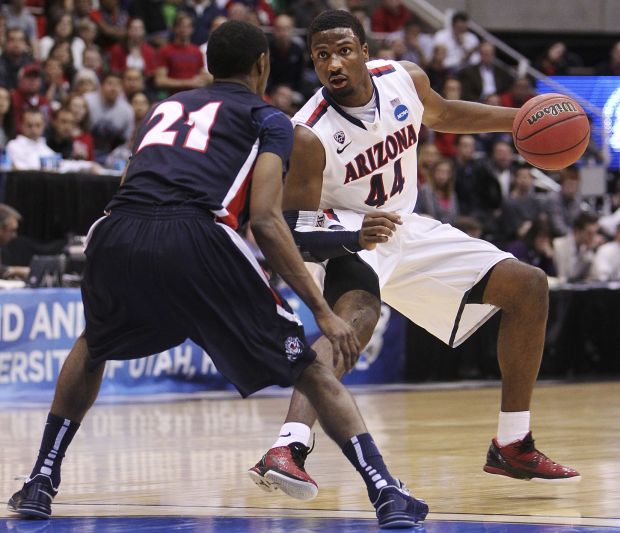 Arizona's Solomon Hill dribbles against Belmont's Ian Clark. Hill, who was 3 for 4 on three-point shots, said Belmont was the favorite, according to most Facebook and Twitter users. "It was a little bit of a motivator," he said.

Two guys with jerseys hanging on the McKale Center walls came to life Sunday, and their message paralleled that of the head coach and the veteran players who are in UA uniforms today.

It was about friendship, and it was about chemistry. It was about team. It was about what turned a collection of talent into a 1988 Final Four team so tightly knit that its members still consider each other "best friends," according to what former Wildcat Steve Kerr told the McKale Center crowd before Sunday's Red-Blue Game.

And it was about whether the current Wildcats, who debuted seven newcomers Sunday when the Red beat the Blue 62-58 in the intrasquad scrimmage, can somehow develop a bond to sew their considerable talent together.

Kerr and Sean Elliott, the decorated former Wildcats who took the microphone during a celebration of the 1988 team's 25th anniversary, led the discussion about teamwork and what Arizona's basketball future could hold.

Kerr marveled about the physical size of the current Wildcats, who have five skilled players 6-foot-8 or taller, and Elliott told them that if UA can play together "there's going to be a lot of hell to pay for people when they step into this building."

There were signs Sunday that there will be. The Wildcats had a potent mix of veterans and newcomers contributing, with 14 points from senior forward Solomon Hill on the Blue team and another 14 from freshmen forward Grant Jerrett on the Red. Veteran wing Kevin Parrom, back from gunshot and foot issues that plagued him last season, added 17 points.

Then there was veteran newcomer Mark Lyons, who took over the early minutes of the game. A transfer from Xavier, he had 11 points, two assists and a steal in the first half to guide the Red to a 28-24 halftime lead.

"That wasn't his first big game. You can probably see that, right?" UA coach Sean Miller said about Lyons. "He wasn't one of the guys who looked nervous.

Indeed, the point guard's steady presence was exactly what the Red team needed on a day when both sides had to shake off some jitters. While the Wildcats missed shot after shot early, it was Lyons who made the game's first basket after two minutes of play.

For while Miller once again praised UA fans for selling out the scrimmage on a typically ideal October afternoon - saying in his pregame address to the crowd that fan support is "by far the biggest advantage we have as a program" - the crowd does take some getting used to.

"Some guys forget plays," Miller said. "Others can't shoot all of a sudden. It's the game atmosphere and the crowd. Mark comes to us from having an incredible experience."

Jerrett, along with fellow freshmen Kaleb Tarczewski, Gabe York and Brandon Ashley, all played in all-star games and before television cameras as high school standouts.

But this, even an intrasquad scrimmage, was different. Tarczewski took the game's first shot, a hook over Angelo Chol, and missed. He later hit the side of the backboard.

And York, who won a pregame dunk contest by elevating over the backside of the 6-10 Matt Korcheck, missed all four shots he took before halftime.

"I think some of them were a little bit nervous," said sophomore Nick Johnson, who had a game-high 20 points. "Some of them have been on ESPN and stuff, but those crowds are nothing near to this. I mean, 14,500, sold out and all yelling and screaming."

But while Tarczewski and Ashley played better as the game went on, it was Jerrett who put up a versatile, veteran-like performance that spoke to why he earned the team's gold jersey to wear during the second week of practice.

Gold jerseys are given to the Wildcat with the best statistical week of practice, and Jerrett also filled the box score Sunday with 14 points, eight rebounds, four assists, one block and a steal.

"Grant has been one of the early-season surprises," Miller said. "I knew of his talent and had great belief in him as a player, but you don't know how soon things are going to come. … Solomon finished second (in the gold jersey race) and the gap between him and second was really significant.

"It shows that Grant has really gotten better since the summer and I'm really excited about his progress."

Jerrett is one of four talented players competing for time at the two post spots, but Miller said the players would determine the starters, not him.

"Right now, with each passing day of competition, the gap widens and I think roles are more clearly defined," Miller said. "Whoever starts will clearly have earned it."

To some extent, it may be how well the Wildcats handle those roles and any adversity ahead that determines how far this group will go.

That is, when you consider the words of two other former 1988 Wildcats, Ken Lofton and Tom Tolbert, who spoke of team chemistry to the media after the game.

"It's real easy when you're winning to go in the locker room and be best buddies with your teammates," Tolbert said. "But when things start going poorly … it's easy to see these little fissures in the team and guys start pointing fingers. Chemistry to me allows everyone to stay together, and everyone realizes that those things happen over the course of the season.

"With this team, I don't know. It remains to be seen. Chemistry isn't something you either have or you don't. You develop it over the course of the season."

On StarNet: Follow UA through the season at azstarnet.com/pascoe

• Who: Humboldt State at Arizona, exhibition

Arizona basketball: One high-school All-American might have to be a sub

Sean Miller has the kind of problem every college basketball coach would love to have.

Photos: A look back at University of Arizona basketball

As the Arizona Wildcats celebrate the Red-Blue weekend and the 1988 Final Four team, we take a look at some images from Arizona basketball his…

Fans chatted during the Red-Blue game at McKale Center.

Arizona senior Mark Lyons, trying to shoot around Belmont's Brandon Baker, finished with a game-high 23 points on 8-for-15 shooting.

Arizona's Solomon Hill dribbles against Belmont's Ian Clark. Hill, who was 3 for 4 on three-point shots, said Belmont was the favorite, according to most Facebook and Twitter users. "It was a little bit of a motivator," he said.