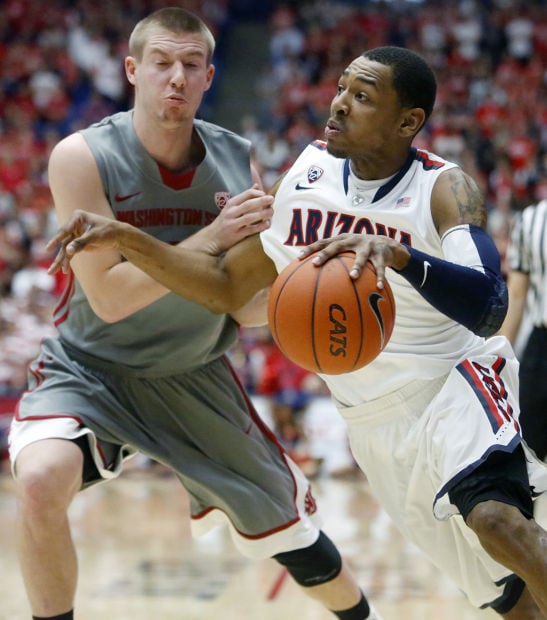 Mark Lyons was a combo guard at Xavier before transferring to Arizona, where he took on point guard duties - to mixed reviews. 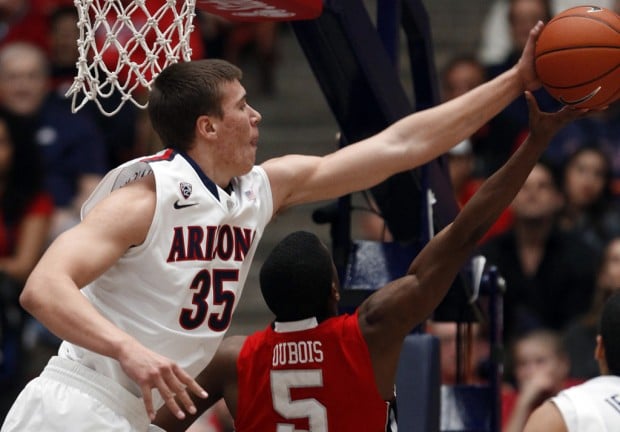 Freshman center Kaleb Tarczewski claws the ball away as Utah's Jarred DuBois drives into the paint in the first half. Tarczewski had a team-high nine rebounds as the Wildcats ran their record to 14-0, 2-0 in the Pac-12.

Sometimes in college basketball, one adage goes, heavily used freshmen are no longer freshmen near the end of their first season because of the experience they have gained.

But the way Arizona's new guys are going so far this preseason, they might not be freshmen much past November.

The Wildcats first took advantage in June of a new NCAA rule allowing limited small-group drills over the summer to players taking classes. Then in July and early August they suited up the whole team for 10 full practices before their Bahamas exhibition, when they played two games against the locals.

This week, they are again holding small-group drills, limited to four players each for a maximum of two hours per week, and they will start getting another two hours' per week of full team practice allotments from Sept. 15 until full-time practices begin Oct. 12.

Miller said he rotates different players in the small group drills, which are now extensions of what the Wildcats did before their Bahamas workouts.

"We try to do it two ways," he said. "Sometimes they're with each other in a position group where the focus is on their set of skills, but sometimes you can mix them up, have two smaller guards and two bigger guys, and you can work on different dynamics.

"We try to hit on all parts. Some defense and skill development, some team things. We try to make it almost like a mini-practice and most importantly try to simulate a fast pace."

Already known for their collective talent, the freshmen appeared pretty polished for early September. Chol, meanwhile, has added confidence and strength that he will need to compete for playing time against the stiffer competition.

"To have the team workouts (before the Bahamas trip) added to the advantage," Miller said. "I think each of the freshmen have added to that significantly. Hopefully they can take that head start and build on it."

Although the UA players were not available for comment, Miller discussed each of the four post players. Redshirting junior forward Matt Korcheck did not take part in Wednesday's drills, because only four players are allowed at a time.

Among other things, Miller said:

• Ashley has great basketball sense and versatility on defense.

"He can guard perimeter players, which I think will happen as his career unfolds, and we're also counting on him to be able to guard the low post so we're hitting him with a lot. He's been here since June, and more than anyone in the program he's been consistent with his work ethic, which is a heck of a compliment to give him as a freshman.

• Although Jerrett couldn't arrive until July, he's catching up physically.

"He's really like the other four freshmen (counting guards Gabe York and Jacob Hazzard) doing what we want him to do and being willing to learn.

"Each one of them will continue to progress. The good news is we are in early September, so we have almost two full months before we get close to game, and a lot will happen in these eight weeks both on the court and off the court."

• Chol has gained about 13 pounds, to about 230, and has added confidence since a year ago, and it shows in the fundamental small-group drills.

"Angelo has made a lot of progress from the time he's gotten here. It's much different. He's much more sure of himself. He knows what to do."

• Tarczewski has had tendinitis in his knee since even before he arrived at UA, but it's not the fault of the 30 pounds of strength he has added.

"The weight he's put on, he's put on in the right way. He naturally progressed just by working hard. I'm sure there will be a case five years from now where he'll be even stronger. I think it's a good thing where he's at physically."

Follow the 2012-13 Arizona Wildcats basketball season - from off-season developments through the postseason - via our interactive timeline.

Mark Lyons was a combo guard at Xavier before transferring to Arizona, where he took on point guard duties - to mixed reviews.

Freshman center Kaleb Tarczewski claws the ball away as Utah's Jarred DuBois drives into the paint in the first half. Tarczewski had a team-high nine rebounds as the Wildcats ran their record to 14-0, 2-0 in the Pac-12.